Lavender Africans...I know I got taken...just how bad is it??

I bought these birds off of someone with a sad story. When I got there, I had to get them! Now, they were sold to me as Lavender Africans. The one with the orange beak and feet is a lavender color, but I don't think it's an African. It is also supposed to be the male. The other two look like regular Africans to me, except maybe a little bit lighter. These are supposed to be female, I think they are. These are about 9 months old. The male with the orange beak and feet isn't washed out, that is his color. 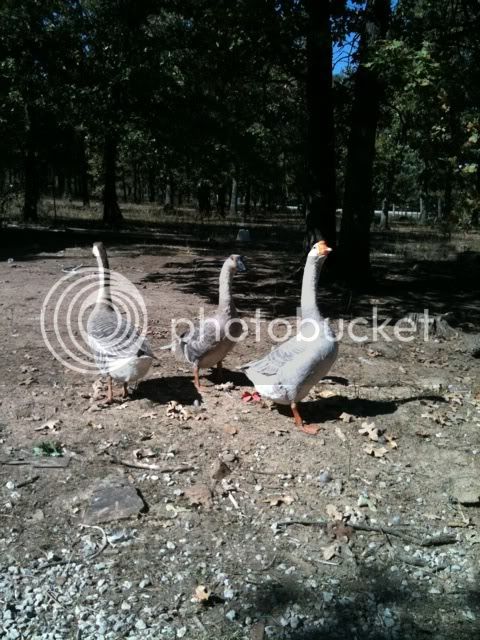 whatever they are, beautiful!!

I did not realize there were Lavender Africans. Cool
O

They look Chinese to me?

Here is a link to a website about Lavender Chinese geese.

So y'all really think they are Chinese?? That would be awesome! We just lost our Chinese and really enjoyed them. Thanks for that link! It looks like I ended up with 1 lavender and the other 2 are blue? When I picked them up I thought they looked Chinese, but I've never had Africans, and I know they look similar. I'm really excited about them, now!

Thanks so much for the link and opinions!

They look like chinese to me too. They dont look heavy enough to be African in my opinion. I only have brown though so cant help on the color. They are beautiful though.

Have fun with your geese!

The girls look African to me, but

I've only got one African and he's a male. Maybe they are Chinese and I'm clueless? Lavender Chinese sound really cool.

Well, I've never had Africans, but the females are smaller than the male, so I would think if he were Chinese and they were African, they would be significantly bigger? Don't think I mentioned the age before, but she told me they are 9 months. They haven't started laying yet. I am really excited about the idea of babies! The only pictures I found of lavenders, they had black beaks and feet. His are orange and he's got blue eyes. I am wondering what color babies they'll have!

B
Goose momma of 3,wishing I knew sex

J
What have I got? One is surely a BR mix