I have had ducks for two years now with no illnesses or injuries so this is new for me. I have one drake and one gal (out of 6 total) that BOTH have a bum right leg at the hock...swollen but not hot. I brought them both in and put them in my bathtub - the girl's injury is worse, she won't use it at all. The drake is not as swollen and he uses it but favors it.

How do you soak a duck's leg in epsom salt without them drinking the water? Should I do it in my bathtub? I am clueless about that whole idea....

I have three Great Pyrenees pups and they are going through their chase everything phase, I think that may have caused stress on their joints from running too much. The dogs are contained but the ducks aren't so they get into the dog area when I am not around.

The only other thing I can think of is maybe a niacin deficiency? These particular ducks are less than a year old. The other ducks are not showing any symptoms.

I am prepping our garden area (completely fenced in) with a kiddie pool to give them some rest time and a more niacin - rich food source since it is relatively untouched and done for the season.

Here's a pic of the hen. 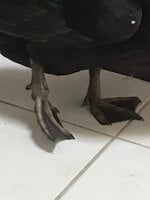 1st..congratulations on never having a hurt or sick duck...geez..ok first..I put them in a bucket of Epsom salts..that way it’s harder for them to drink it...some people cut a hole out of a lid for the bucket and try to get the duck to put their head through there..I find that scared the duck..if you just hold the duck and soothe them, he won’t be able to drink it..just maybe one sip in my experience..lol...plus..when you have a hurt duck, they need rest..and you can’t ..or I should say shouldn’t keep a duck penned up alone..so these two can keep each other company..so that works out for you..but you’ll need to come up with a small enough yet big enough area for the two of them to rehab...the epsom salt should eliviate a lot of the pain...sometimes it’s just a sprain...they just need to rest it...you could think about getting them b complex..and giving it to them. It will help them heal quicker and feel better etc...they have it at feed stores..rest rest rest

Here is a video of them both. I realize the tile is slippery, so I put towels down after the video so they can walk better.

Thank you for the feedback Duckfarmer1

]Any forcing ducks to run can really be hard on their legs I’d fix it so the ducks cannot get into the puppies area right now in case that is why these 2 are injured. I do the same as Duckfarmer1 I use a bucket with warm water and ES. Giving them an area where they are safe and have limited movement will help them rest more and heal. Also swim time it can relieve reassure and help keep muscle working and strong. Be sure they can get in an out safely. Also vitamin b complex is really good for leg health. TSC has a good on in liquid 1ml each over a tasty treat so they get full dose.
Last edited: Oct 24, 2019

Teva said:
Thank you for the feedback Duckfarmer1
Click to expand...

I couldn’t see the video..just a snippet of the ducks..but your chickens are gorgeous