Warning! This is a dead animal in a trap. Its not a catch and release trap, so if you don't agree with trapping or dead animals, don't look!

I'm now wondering how to remove this thing without getting smelly and nasty. I guess I should have thought about that BEFORE I set the trap

And I wonder how many more there are....... At first I thought it was bigger than what it is but upon closer inspection before I almost gagged and barfed, its not that big maybe 4 lbs or so. Its mostly tail. The claws are at least an inch long! Behind it is a hole that goes under our tool shed. I saw a cat run under there as I was walking out to the trap to figure out where the heck the smell was coming from. Cats and skunks don't hang out together do they? The smell is freaking horrible. I've almost barfed coming within feet of it. 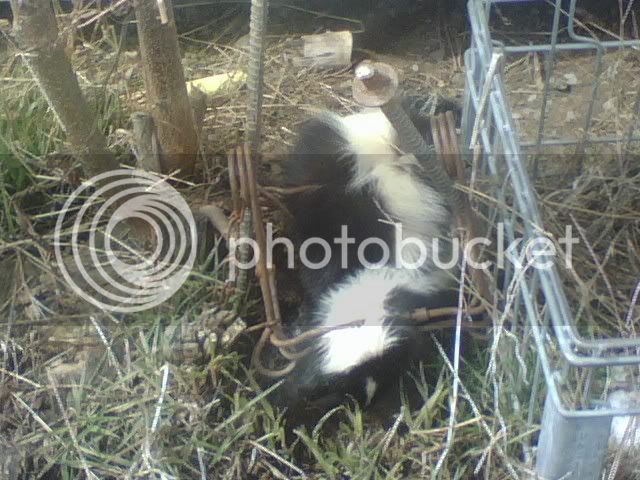 if it dont stink now.id be very careful removing it from the trapp.i think youll be ok as long as you dont bust the stink bagg.if you do your gonna get stink bombed bad.better have lots of mater juice handy.

i'm not sure how long it will smell. The ones on the road usually only smell about 2 days. Maybe you could try dumping some tomatoe juice on it. It might at least help you out enough to get it in a bag. If it was me I wouldn't even worry about the trap I'd just bury the whole thing. Be carefull that you don't get any of the skunk oil on you.

Bury the whole thing, and buy a new trap.

Rubber gloves, gas mask and a shovel or back hoe.

Quote:
One question regarding that idea.... These traps are numbered and registered with the Department of Wildlife, they have a tag on them identifying who the owner is etc. If i just get rid of the trap does the tag number have to be accounted for with them (DOW) do you think?

Just pick up the whole deal...skunk & trap....put it in a small running creek and the next day the smell will be gone. I started trapping 2 years ago (and I LOVE it!) ....and I have to confess that I love the smell of a skunk ROTFL

what in the world do you do with a skunk hide.

Quote:
Okay I wouldn't come near you either, but its very cool that you trap! I just got my traps and am just learning myself. I don't know ANY women that trap! Do you sell your pelts? I want to make an outfit for the mountain man rendevous they have here. I'm learning to tan cow hide right now to learn.

Oh man what a mess! Hope it doesnt have babies under you shed! Dont let the dogs roll!

What do I do about catching a predator?
2 3

Warning graphic w/pics What attacked (and killed) my duck?
2