SittinDuck said:
Where? Two people here have expressed astonishment at the age of my ducks.

My duck is not unwell. The problem is her inability to clean herself, which has zero to do with diet.

I have 8 other birds of ages 5 to 7 that are models of health and vitality.

Yet no one can do even that much. Instead I'm expected to abandon my own experience in favor of theories of people who haven't accomplished as much. It's absurd.

If the foremost authority on fertility in relation to nutrition + demonstration of his theories in action isn't enough then why would more facts make a difference?

There is nothing left to do to help my duck other than recommending a good B vitamin. The solution is returning her to the pond so she can resume caring for herself without my meddling.
Click to expand...

Your duck isn't moving around and is unable to clean herself. She's unwell. Maggots don't just try to make friends and hang out for no reason. There's something going on. You're being argumentative with anyone that suggests something that you don't want to hear. I imagine the majority of people don't want to post because of that fact. We want your duck to feel better and to be able to be a duck. Clearly she's unhappy and returning her to the pond where she hides all day isn't helping her wellbeing. Didn't you bring her in from the pond because she had maggots?
Im locking my animals up right now but I will happily share a picture of the liquid B vitamins with you.
I truly wish your duck the very best. I want her to live many more years as a happy healthy duck, honestly.

Overo Mare said:
I have no words lol. Good grief.

What about dogs that crave socks and tennis balls? I've seen a vet pull an intact hair brush from one dog's stomach.

Or how about dog's that eat rat poison? Or antifreeze?

I'm beginning to get the troll vibe. Zero logic to be found here.
Click to expand...

My sister's dog eats her underwear. Wonder what nutrient he is missing and craving?

SittinDuck said:
No, I don't even know what a preening gland is or where it is. I don't know what wet feather is either.

No it received some special feed for young ducks.

Yes of course! I'm dying for a good recommendation of B vitamins.

I'll have to google that and see if my duck has it. Never heard of it.

Yes, she can walk and climb mud banks.

It did. She used to step on both feet, but now she only steps on one foot ( I forgot which one).

She could be scared. She's been at the pond for over 6 years then suddenly she's at the garage and has no idea what to expect. I don't think old ducks can learn new tricks.

But even at the pond she never moved around much unless it was to get in or out of the pond. If she is on land, she is usually sitting.

How old are they? Mine had straight legs for a number of years. Honestly, I think it's a lack of walking and the bone stimulation. Sitting to much contributes to the bone deformation as does the swimming probably.

Astronauts in zero gravity will experience bone deterioration. The same is happening with my duck. The ducks and geese that are more active do not have the same problem. The geese actually sleep standing up.
Click to expand...

If you don't even know what a preen gland is, how can we even take you seriously about your "experience"?

SittinDuck said:
No doubt your lack of words will convince me to abandon my experience.

Those are not foods to be chosen from.

Well you could start by logically debating my points rather than exclaiming that you have no words and resorting to poisons in comparison with food.

As I said, make a poll and lets see what old ducks eat.
Click to expand...

Lenny loves chickens said:
Layer flock feed extra niacin and a close watch for anything that goes wrong he had a terrible arthritis the last 3 years of his life but other than that he was happy.....and vinegar in there water so he could digest right I think that was the main reason he lived long.....
Click to expand...

There is one duck older than mine that ate its proper food + vitamins + vinegar to aid digestion.

I'll have to check back in 5 years to compare the longevity of my duck on a diet of dogfood, corn, layer pellets, grass, clover, bugs, and whatever. 5 years is about how often I post here.

This is given by mouth to the duck. Purchased at TSC 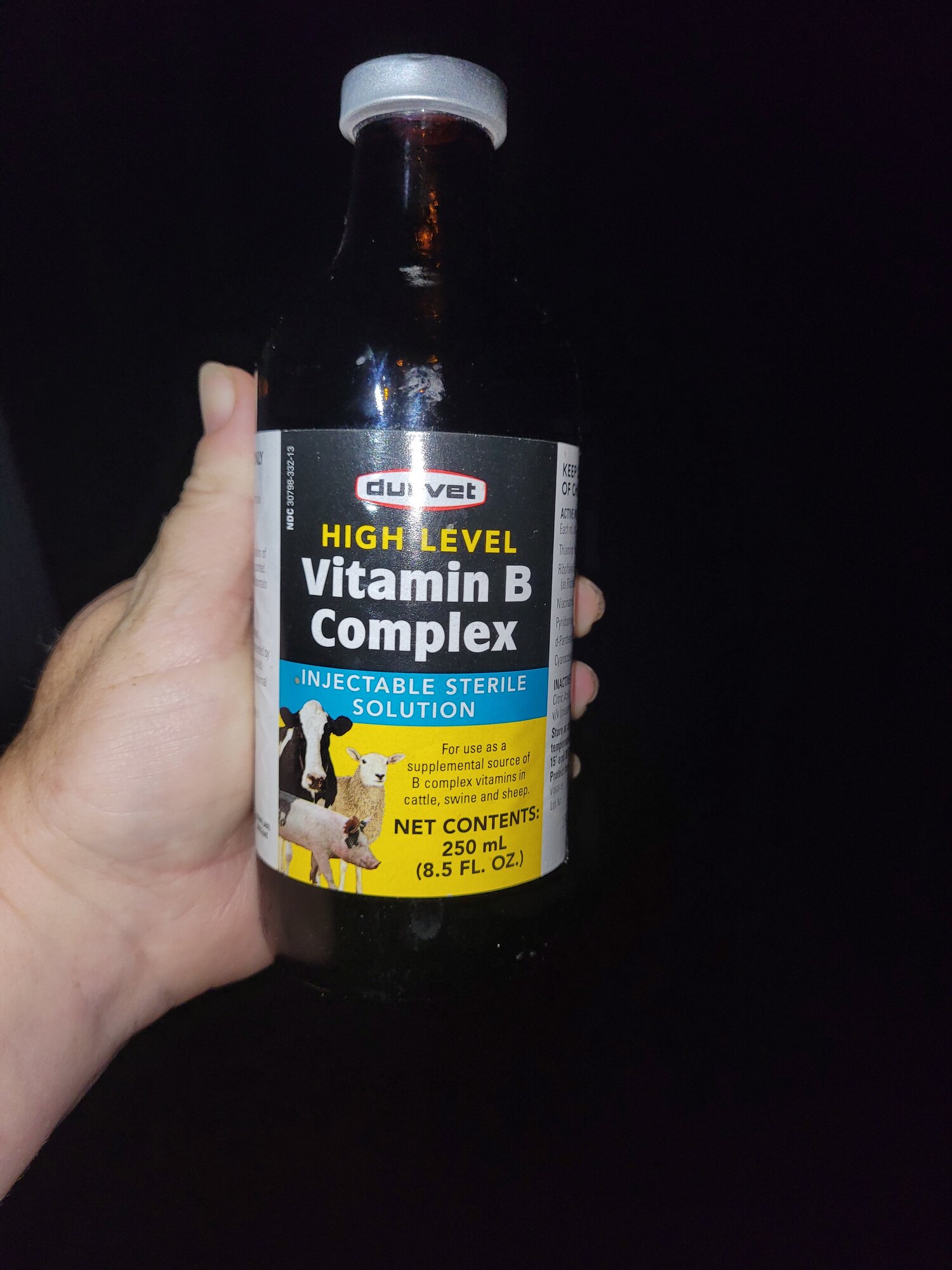 HeatherKellyB said:
Your duck isn't moving around and is unable to clean herself. She's unwell.
Click to expand...

She is not unwell. Why must I repeat that so much? She cant clean herself because she can't get in the pool often enough and the pool isn't deep enough. Otherwise she's in perfect health. The legs are from sitting and consequent lack of bone stimulation. Whether or not niacin would help is all speculation.

All indications are that she could live another 10 years. I said that in my OP. She is showing absolutely no signs of decline.


HeatherKellyB said:
Maggots don't just try to make friends and hang out for no reason.
Click to expand...

The reason is she is unable to clean herself.


HeatherKellyB said:
You're being argumentative with anyone that suggests something that you don't want to hear.
Click to expand...

When you say my duck isn't well when she clearly is, what do you expect? You think I should just cede your opinion in direct contradiction to my observation?

If you say grass is pink and I disagree, why am I argumentative?

You are the argumentative one by refusing to believe when I say my duck is in good health. The problems have nothing to do with diet.

And I've already conceded that vitamins would be of benefit and all but begged someone to please make a recommendation.

And I've thanked everyone for their suggestions but everyone here seems to be full of attitude. Social media is such a horrible thing that brings out the worst in people which is why I haven't posted in 5 years and certainly will not for another 5.


HeatherKellyB said:
I imagine the majority of people don't want to post because of that fact.
Click to expand...

You're about to have me not posting because I have to repeat myself and defend myself from relentless demonization in spite of my success.


HeatherKellyB said:
We want your duck to feel better and to be able to be a duck. Clearly she's unhappy and returning her to the pond where she hides all day isn't helping her wellbeing. Didn't you bring her in from the pond because she had maggots?
Click to expand...

No, I brought her from the pond because she had a broken leg in winter and I thought it was too cold for her. It was because she was away from the pond that she was unable to clean herself and had trouble with the maggots. So returning her to the pond will solve the problem.

As for her happiness at the pond, I can't help that because I can't take on more of her breed nor defend her from the geese.

Anyway my problem is solved and as soon as I get a vitamin recommendation I'm done with this thread.

tripletfeb said:
My sister's dog eats her underwear. Wonder what nutrient he is missing and craving?
Click to expand...

Wonder why you think it's a nutrient that he is missing.


tripletfeb said:
If you don't even know what a preen gland is, how can we even take you seriously about your "experience"?
Click to expand...

If you can't find the area under a curve how can we take you seriously that you know 2+2?

If you don't know everything how can we believe you know anything?

You're flaunting a logical fallacy as if it were a virtue.

Don't worry, I will.

My 14 year old Muscovy female my 10 year old Muscovy (3) and my 9 yr old Muscovy female eat non gmo layer and 6 grain scratch mixed at 50/50. My young ones eat the same. Dry dog food and meal worms are a treat along with romaine lettuce and chopped tomatoes once in a while. Yes go to TSC and get the liquid B complex start her on 1 ml daily you can put it over a small amount of treat so she’s sure to get the whole dose.
edited to add my muscovy would live on dog food if I let them, but I don't. They get the same nutritious dog food my dogs eat Salmon and Pea. And it is only a snack for them.
I like to feed it during molt because of the extra protein they can use when growing in those new feathers.
Last edited: Oct 15, 2021

And many people here probably consider a duck that can't clean itself is unwell. I think that's where the confusion exists. And, tbh, I expressed astonishment at your duck's age because I was trying to be nice and defer to your experience. There are lots of folks on here who have senior citizen birds. Hopefully, yours will be among them!

HeatherKellyB said:
This is given by mouth to the duck. Purchased at TSC

Ok thanks. That's all I needed.

Thanks for the help everyone, but this place is a horrible way to spend time. See ya in another 5 years.

There is good knowledge to be found here (even if ppl disagree with each other sometimes). Please consider doing some research about Pekins.

Good luck with your duckie!