Marek's in the flock? Bald spots?

LONG POST (sorry!):
I have a flock of 3 Rhode Island Reds that are 2 1/2 years old and amazing girls!

I added 9 pullets in February (several breeds: americana, black barred, golden sex link, new jersey red and one other I don't even remember).

One flew out of the brooding box - maybe 3 weeks in maybe? When I saw one limping, I assumed it was the one who made the tumble. We figured she would heal and adapt. Didn't question it at all (had never heard of Marek's). We put the new pullets in the barn next to our big girls for several weeks once they got their feathers. She seemed to be getting worst, but was still eating and drinking etc. I finally merged the flocks. Ended up one is a rooster and seemed to be pecking at the lame one. My in laws were watching them that weekend, so we asked our neighbor to remove the rooster and the lame one til we got back.

The lame one died shortly after. Still didn't question it. My husband (who is a human doctor) felt she didn't break her leg, but had some degenerative disease by how it was going backwards etc.

Now I have three other pullets who have these spots near their saddle with NO feathers. I at first thought it was pecking order stuff, but it's odd. All in the same area. And I found one of them hiding under a food dish with her body in a box hiding. I thought she was dead. I cannot tell if they're red or so, but look kind of scaly, but I don't know what it's supposed to look like? I tried taking several pix and they all turned out poorly. This is the best pic, looks larger in real life. All three girls have in the same spot.

I am also observing some of the pullets going out side (they range in the afternoons) and laying down oddly (like the lame one did), but their legs looks fine when they walk.


1) What type of bird , age and weight (does the chicken seem or feel lighter or thinner than the others.)
Two Americanas, 1 New Jersey Red, 1 Sex link - four months old - no noticeable weight different
2) What is the behavior, exactly.
bald spots, some laying down (not dust bathing) and hiding
3) How long has the bird been exhibiting symptoms?
about a week or so?
4) Are other birds exhibiting the same symptoms?
yes - three with bald patches - the one that lays down most frequently doesn't have a bald patch
5) Is there any bleeding, injury, broken bones or other sign of trauma.
no bleeding
6) What happened, if anything that you know of, that may have caused the situation.
no
7) What has the bird been eating and drinking, if at all.
water, grow mash - some lay mash is int here for older girls
we also give some veggie left over treats
8) How does the poop look? Normal? Bloody? Runny? etc.
haven't noticed anything odd
9) What has been the treatment you have administered so far?
nothing
10 ) What is your intent as far as treatment? For example, do you want to treat completely yourself, or do you need help in stabilizing the bird til you can get to a vet?
mostly self treat
11) If you have a picture of the wound or condition, please post it. It may help.
12) Describe the housing/bedding in use 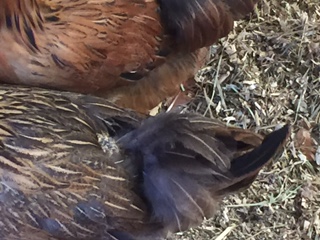 You mentioned initially that one of your birds is a rooster. I'm a little unclear on the ages of the birds you added......
If he is still with the girls then my first suspicion is rooster damage.
This happens when feathers are pulled or broken when he is mounting them. Very common area to first see damage. Young roosters can be very overzealous with raging hormones and be very rough sometimes. Also hens that are more submissive or are favorites will get more attention and thus more damage. The hiding or trying to hide is probably caused by that also. Often you will see feather loss on the back of the head also where he grabs with his beak.
You can use hen saddles to help protect their backs (you can make or buy, http://www.hensaver.com/), not a perfect solution but helps. Also consider separating the rooster for a time to give them a break and him some time to mature, or another solution is to re-home him if you don't plan on hatching/raising your own chicks. Sometimes the roo's will calm some as they get older, some roo's just stay rough.
Another possibility is lice or mites, so you should check them over for that too. http://www.the-chicken-chick.com/2012/08/poultry-lice-and-mites-identification.html
Hard to say what you lost the other bird to, many possibilities. If you were to lose another with the same symptoms I'd recommend a necropsy to find out why. There are other conditions that can cause some Mareks-like symptoms. The only way to confirm Mareks is by necropsy. Hope this helps, at least maybe narrows it down.

All the new birds are about 3 plus months old. We removed the rooster about a week ago. I am not sure of the timing of him leaving and the bald spots - we were out of town for a long weekend and someone else was helping !

Would a rooster that long be mounting?

I don't have the dead bird's body anymore for a necropsy.

THANKS for all ideas!

3 months would be very young for that roo behavior. Usually starts more around 20 weeks or even later. A little earlier wouldn't be unheard of, but 3 months is pretty young. Unless he was a bully.
If the girls are still hiding after his absence, then maybe look for a bully amongst the hens. It could be pecking order working itself out and maybe someone is being really tough on them. If they are trying to hide then something is definitely going on. Do they have adequate space and can get away from each other when needed? Over crowding can cause aggression to each other. The feathers can take a while to grow back, sometimes not until they molt. At 12 weeks there is a good chance it may be sooner, but still takes a while.
I'm not sure what the laying down oddly might be. Are they sunning? Sometimes they will stretch out and spread their wings some and sunbathe. Just guessing since I can't see the behavior.
With no other symptoms the only thing I can suggest is to do some observing to see what is going on, and do check for lice and mites.
You can also google (etc) cutaneous mareks pictures and find some images to compare.
There are also many, many posts on here regarding mareks. I'm by no means an expert on mareks.
I did not assume you still had the body of the one who died, but meant if you lose another with similar symptoms, to have a necropsy on that one, to find out if it is mareks, or something else. Do you know if they were vaccinated?
Just thoughts and guesses. Maybe someone else will have ideas. Hope you can figure it out.

Well I firmkly advise this for the helping the chicks to get new feathers and body health.
WET MASH PROBIOTIC RECIPE
For 1 chicken X it for the number feeding the recipe
3 tbsp. of dry chickenfeed
1 tsp of dry flax seed meal
6 tbsp. of milk any kind
2 tsp of plain yougart
add 1 400 mg of Vit E, by cutting en off capsule and pouring into wet mash
crush 1 Vit B Complex tablet and add to wet mash
1 selenium tablet crushed and added to the mix.
mix good and feed, when done eating
take bowl to house and wash with hot water
since you feel the chicks are healthy
feed once a ay and they should eat it in 20-30 minutes
I can be fed 2 time7s aweek for life.

Thank you all for your advice! Greatly appreciated.

I welcome any more thoughts.

I don't think they're crowded. I have 10 gals in a 10 x 10 ft horse stall. Although the big girls may "feel" crowded compared to having all that space to themselves....

Thanks to you. Wanted to update you. It ended up being a simple bully situation. Still working on fixing it..... now only two of the three are. Appreciated your input.

B
Bald spot on rooster's head