Good morning everyone! I haven't been here for a while because I have not had any chickens for almost 2 years. In 2019 my next door neighbor's dogs chewed threw our privacy fence, broke into our chicken coop, and killed most of my chickens while I was out. While we fought with the neighbors over who was responsible for fixing the fence I rehomed my surviving chickens and have been bird-less until a few weeks ago.

(Don't worry, the fence is now fortified and the coop rebuilt.)

A few weeks ago I acquired a young (full size but not yet laying) Production Red hen who was purchased from a feed store. She was used as a demonstration bird for an animal hospital training staff how to handle birds for medical treatments. She needed a home afterwards so I kept her. She is an extremely calm chicken. She is very quiet and tolerates being approached, petted, picked up, and will stand on my arm like a parrot or raptor. She takes treats from my hands and is a very good chicken. I call her Scarlet.

I knew she needed a buddy or two so I was planning to pick up a few Polish and BLRW chicks from my local chicken breeder this spring, but on Christmas Eve a friend of mine let me know she had a chicken who needed a new home. Apparently my friend's uncle is very sick and my friend is taking care of his property. They started with 14 chickens but between the hawks and coyotes they are down to just this one. She is a barnyard mix hen with three young chicks, maybe 2 weeks old at most. She is very feral, loud, and watchful. She is not aggressive towards people but is very fearful. I call her Pollo Loco.

Loco is beating the crap out of Scarlet any time she tries to come out of the coop to forage. I suspect she is just being very protective of her three chicks, but Scarlet doesn't fight back and doesn't deserve this abuse. I used to have chickens for almost 10 years and never had this issue before. Scarlet now has a big wound on her nares and is terrified.

What is the best way to bond Scarlet and Loco so that Loco stops injuring her? I have read elsewhere that I should move Loco's chicks into a brooder until they grow out so that Loco won't feel the need to be so protective. Is that a good idea? What else can I do??

For fun, here is a picture of Scarlet. 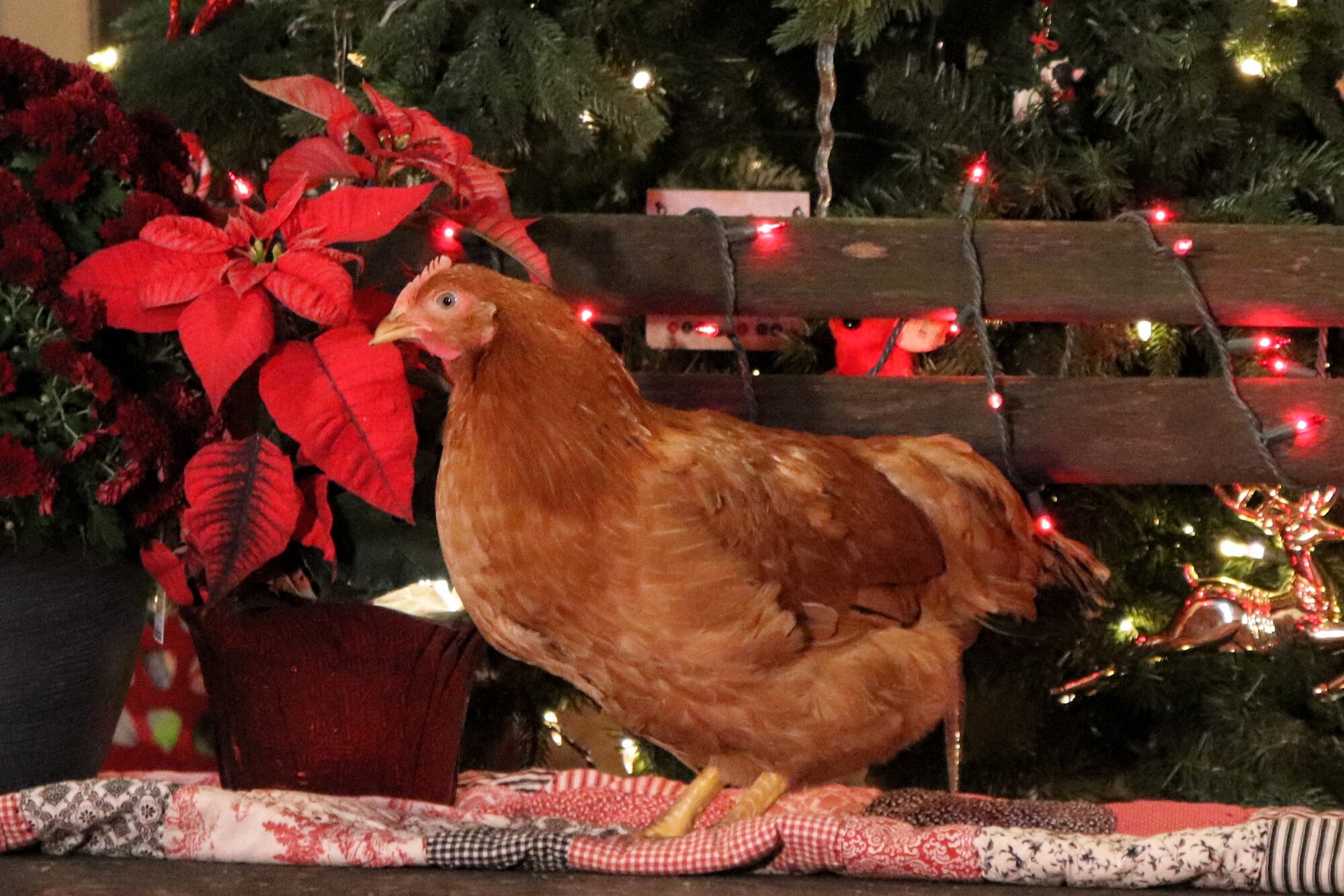 How long did you quarantine the mama and her chicks (recommended time is 30 days) and did you use the look but don't touch method to introduce them for a week or two after quarantine?

I did not do any quarantining. Loco was the only chicken (other than her own chicks) on her former property since the rest were killed about a month ago. My friend who has been looking after them is also a vet tech so I trusted her judgement that Loco has not been showing any signs of illness. Regardless, she couldn't stay where she was living so I decided to take the risk. I work with three board-certified avian specialists so if something pops up they will be in good hands.

I also did not do a "look but don't touch" method of introductions. I never did that with any of my former chickens and never had this problem so I didn't even think about it. My coop is very large with a large (100sq. ft.) covered run attached so I thought that would be plenty of space for two hens. Do you think it would work best if Loco stayed with her chicks during this period or should they be separated? I have a brooder I can set up in our garage.

Thanks anyways! I got the information I needed from another group.

Hope that things are working out. The pecking order is frequently brutal.

Could you please let us know what you try and how it works out. I haven't seen this situation before, a broody with chicks integrated with a single immature pullet. I'm not sure what I would have suggested. Probably as long as no one is injured just let them go, having feed and water inside and outside. Maybe adding clutter to the run to improve the quality of that space. 100 square feet should be plenty once they are all grown and integrated but it is not that big when integrating, especially with clear lines of sight. I'm thinking more of when the hen weans her chicks and leaves them alone to make their own way. The room and clutter could really come in handy then.

My other thought is to isolate the pullet until she starts to lay. Pullets typically mature a lot about the time they start to lay, that might change the dynamics between the older ones. I'd still expect the broody to protect her chicks but once she settles in she may not be quite so protective.

Of course there are other options. Good luck however you try.

I would personally keep them seperate (but within sight of each other) until the chicks are weaned
Then there is no reason why Loco should be defensive of the chicks.

Drache said:
Thanks anyways! I got the information I needed from another group.

Great!
Could you share what you learned, and how it works out, with us here, please @Drache ?

This is a challenging situation. I have never introduced a mama and her chicks before. I hope it all works out.
And we always love pictures!!! It is part of the chicken addiction.

H
Rooster defensive of coop toward everyone but me
2