Hello all!
I've had my chicks since Thursday and so far it's been a disaster.
They are modern game bantams and so far I've lost FIVE chicks... My remaining four seem great except one has me a tad concerned.
I've spoken with quite a few people and they all think it was stress from shipping that has been killing them.
The one chick I'm worried about its a bit smaller, a bit quieter, and a bit tired. She seems to just stand and watch while the others play, eat, and drink. It's not that she ISN'T doing anything, it's just much less.
Her behavior has me paranoid with all the other losses I've had so I've been all over the forums now and I'm seeing people talking about MEDICATED CHICK FEED... The food I have is organic chick grower / starter. Do I need to switch?

As far as I know, the medicated chick feed only helps prevent coccidiosis. I don't know that it will help perk up your chick. Maybe you can get some electrolytes in her, or some Poultry Nutri-Drench (I have never used that, but those who have say it's a good thing to have on hand.)

bobbi-j said:
As far as I know, the medicated chick feed only helps prevent coccidiosis. I don't know that it will help perk up your chick. Maybe you can get some electrolytes in her, or some Poultry Nutri-Drench (I have never used that, but those who have say it's a good thing to have on hand.)
Click to expand...

They had sugar water yesterday - she's still the same. Her eyes are bright and alert..
I could go grab some of that, I do keep hearing people mention it.

Or there’s also Save A Chick. They make both an electrolyte and a probiotic to put in water, I used both when I brought mine home for the first gallon of water I used. 1 pack of each per gallon. After that gallon was gone I didn’t use it any more. I think it’s a lot of stress to be shippped and moved, new environment, etc, so they sometimes need a little help.i did have mine on medicated feed until the first bag ran out and then I switched to an organic non-GMO starter, but as someone else said I don’t think the medicated feed really makes a difference for anything except coccidiosis.

This is what I used 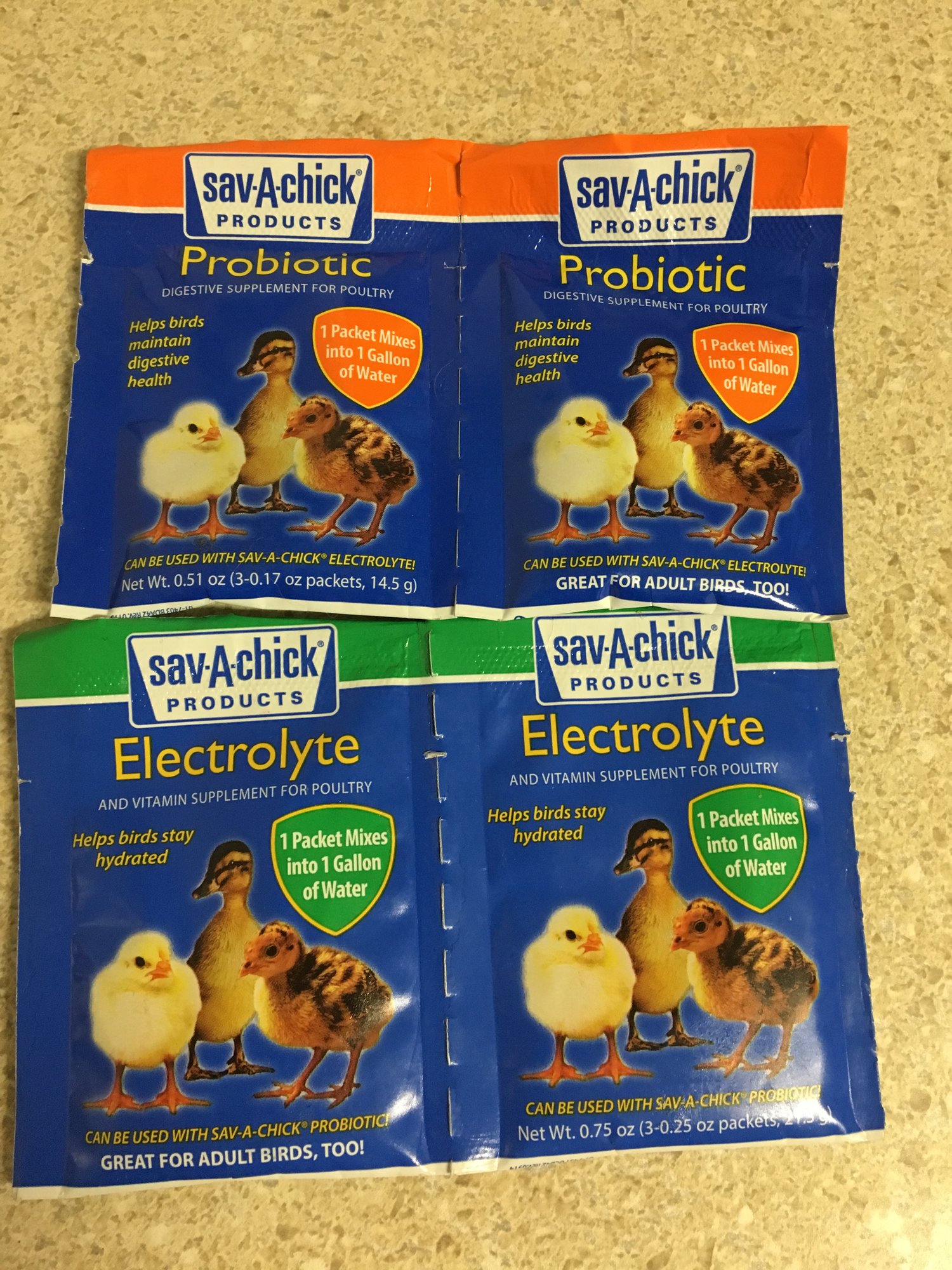 And the two can be mixed together?

almount92 said:
And the two can be mixed together?
Click to expand...

Yes. Packets do say you can add them both (electrolytes and probiotics) into the sam gallon of water. Needs to discarded after 24 hours though.

I didn’t discard after 24 hours. Whoops? I mixed a pack of each into a gallon jug of water (sealed with a cap) and used that to fill their water bowl every day. I didn’t know you were supposed to discard it within 24 hours. It lasted a few days. Well, they seem happy and healthy? LOL But yes, the lady at the feed store told me you could add both at the same time.

I used a drop of straight nutridrench on a chick that had problems with his feet and legs (I had to put a boot on one of his feet). Within 2-3 hours he was walking much better and coming out from under the heater plate to eat and drink. I also tried it on a chick that was flagging and had umbilical problems. It didn't help, the chick died. It's worth a shot.
C

I got my chicks last Thursday. The little runt had the umbilical cord still red and a little blood but has been eating and drinking ok but is pushed around by the older ones. I put apple cider vinegar in the water , used some electrolyte water and I think she will make it. I got 12 chicks from a lady 5 miles away. I still have 12 so sorry you lost some. That's heartbreaking.

R
Can I switch my chicks from organic crumble to medicated?

K
When to switch feed

Medicated feed and other food questions

P
What to do?! treat and vaccinate or too late? I don't understand these diseases!