Men take an interest in chickens..almost!

I have had three near-death experiences when my father and a friend of mine, both males, took an interest in poultry of some kind. First off, my FATHER, we're talking about the man who wanted eat them a few months ago, decided my st run polish chick was his . He NAMED it and calls it his "hippy chicken." Second experience was also with my father, he like my duckling, Poet and called it CUTE! He called a bird cute. Oh, yeah.

. Last experience was with a friend of mine. Not many 16 year old boys think ducks are cute, well, he was talking to a picture of Poet on my phone and asked if I could give a chick to him. I wouldn't trust him with a rock so you know what I said to that. But its a start! It's a start!

My dad loves all of my animals. My husband doesn't like any animal. I wish I'd have known that before we got married.

I will never be able to get my mom into chickens but I got her b/f into them.

Hope you weren't to hard on the kid, ya know-- A lot of kids just have no idea what it takes time-wise for good pet care-- much less a chickee or a duckling.

Hope you weren't to hard on the kid, ya know-- A lot of kids just have no idea what it takes time-wise for good pet care-- much less a chickee or a duckling.

lol, he said he'd steal them in my sleep!

I see your from Indiana, but I'll try not to hold it against ya.

Just to let you know, men/guys/boys can and do like chickens as well as women/gals/girls do.

Teenage boys, um, I was one once. Their brains don't develop til much later.

My son came home from school and asked if he could raise chicks for 4H he is 11 so of course he has an interest in little critters... I thought I would have to convince my husband or just buy the chicks and say I need a coop to get him on board but o my surprise when I asked him he actually said sure that would be great... At first he said he would keep the hens and eat the roos but now he said he wont be able to kill these babies...

Our whole family is excited about this school project but has gained a great family experience we will all enjoy...

Because I darn near squished a chick to death with the water container (my first post on this site) the whole family has deemed me as the chicken killer and said if we are going to eat them I have to do the dirty work...

Boys building the coop without me begging! 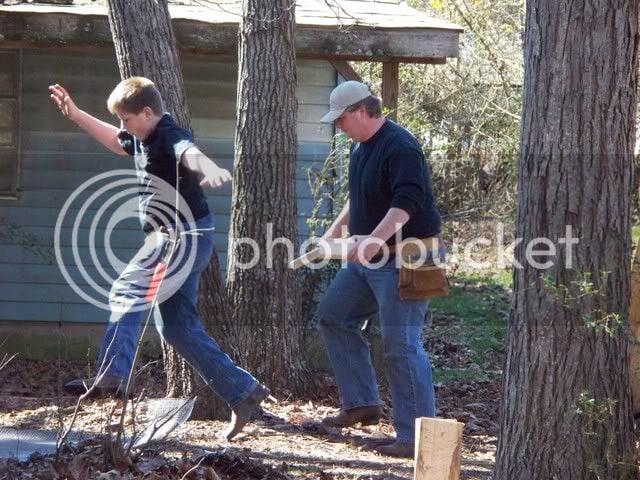