I really wat to get a micro pig but im worried itll turn into a huge pig! So, how do i know whether i am getting a genuine micro pig or not?

You would have to take a look at the parent stock. If the parents are fed a good diet and are still tiny, then chances are the offspring will be tiny as well. I would NOT buy from a breeder who refuses to show you the parents or to tell you what they are feeding their pigs. You have to be careful with some breeders because they basically malnourish their pigs to keep them small which is not healthy at all.

Careful with that though. Pigs can breed at a young age, and before they reach their full size, so even looking at the parents can be deceiving. I will only buy a pig myself if I know I can take care of it even if it grows into a huge porker. If you look back a page or two, moochie started a thread on micro pigs. I have some small (still not the under thirty pounds some advertise) breeds listed that are used in animal testing but seem to be available to the public now. Also, linked was an extensive pig rescue list that had pigs over four years-old that were under 100 pounds.

Thankyou. I have images of the pigs and I would appreciate it ifyou could give me your opiion on them. I have a dit list from the seller also.

This is a pic of Barnie, he is the piglets dad, he is with my 7 year old daughter. 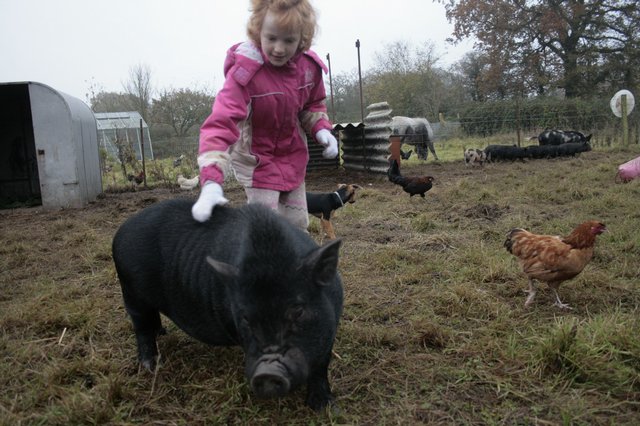 This is a pic with a large fowl light sussex chicken for size comparison. The stock fencing in the pic is normal size so you can see from that how small they are. This is mum and babies. And theyre all so cute so i am strugglingo decide between he all!

http://www.cd3wd.com/CD3WD_40/LSTOCK/001/SA_InfoPaks/docs/pigdiseases/diseases.htm I am by no means a pig expert, but I don't *think* the ribs should show on a pig, and dad looks like he has ribs showing in that first picture. It would lead me to wonder if they are under feeding him for size reasons. I don't know how to age a pig, but http://www.readbookonline.net/read/53019/98104/ might have some pointers to see how old these breeding pigs are. I am not sure what a dit list is, but does the seller have a reference list from people who own one of their pigs that is now over three years of age and still at the promised size? Do you have a pig savvy vet who you could talk with and could give their opinion? What breeds went into these pigs, and where are their lines from? And I think most importantly, if your piglet ends up being well over the promised size, will you still be able to house and feed him or her? Those are just some things I would be asking myself when I looked into a seller.

I just realized you are from England. You guys have better access o Gottingen pigs and other laboratory lines over there. http://www.bartonhill.co.uk/little-swedish-pigs.php The pigs advertised here are within the size range of Gottingens, so this site could potentially be more legit than some others.
Last edited: Nov 17, 2012

Those pigs look great! (In my humble opinion..) The black one could use a teeny bit more weight on him though..
Pigs are NOT supposed to be round like everyone thinks..that's unhealthy for them and they will develope all kinds of health problems from being overweight. So if you get a pig..make SURE that you don't overfeed them.
They should be peanut in the shell shaped. ..(if you are standing above them looking down) . So wide in the shoulders..thinner at the waist...and wider again at the hips/rump.
Last edited: Nov 19, 2012

Those adult pigs are about the size of my pigs.
Also remember that pigs supposedly don't reach full size until they are like 3 yrs old.

A Facebook friend of mine said he had a dream about me. I was carrying around a mini-warthog, on my shoulder. He said it was no more than five inches tall.