More on Colloidal Silver and Marek's

A while back, I posted (see below) about curing two of my hens of Marek's with Colloidal Silver (CS). I've had several chickens lovers contact me and let me know that because of my post, they gave CS to their paralyzed chickens and they have all completely recovered and are walking again. I'll put the original post below, but I wanted to share about a recent experience with a rooster that healed because of CS. I'll post a couple of pics either in this posting or in another.

Copper is a beautiful copper-colored rooster who, when 4-5 months old, began having trouble walking. The joints in his legs lost their strength and he ended up walking on those joints (equivalent to where our knees are). It was horribly sad as he was not only sweet, but beautiful. I began to give him CS. He must have had a really advanced case of it because it took weeks before he started showing signs of being able to walk normally again. I used to visualize his legs as super strong as I'd see him hobbling around the yard and with the applications of CS, his legs got stronger and he started to walk. Every so often, his joints would give out again. He would walk with his tail way high and his head low at first because it kept his legs straight. Then one day, he began walking normally. It was such a triumph. Beautiful Copper could walk. Because it took so many weeks, it took great strength of mind and heart to keep seeing him as fully recovered (even though he wasn't quite yet). I believe that seeing him in full health during his recovery helped him gain full use of his legs again (in addition to the virus-killing CS). We always kept our attitude positive because we had experience that this type of therapy worked.

Here are is photos: 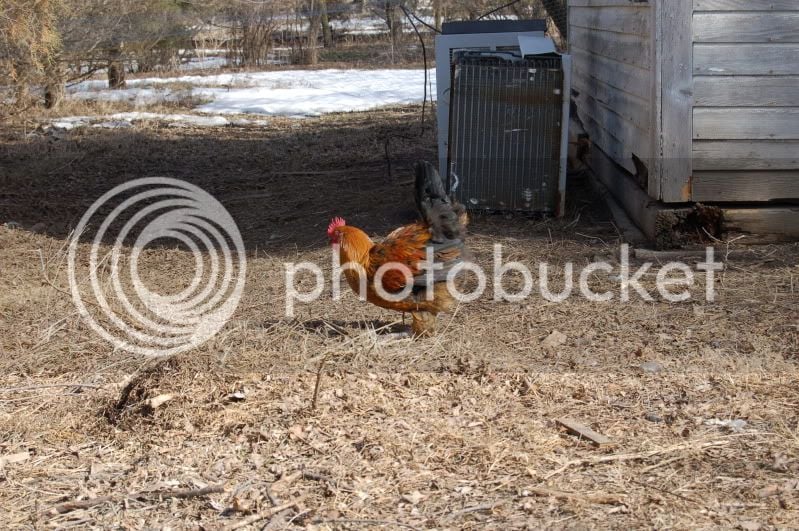 How Copper would peck when his legs didn't work. 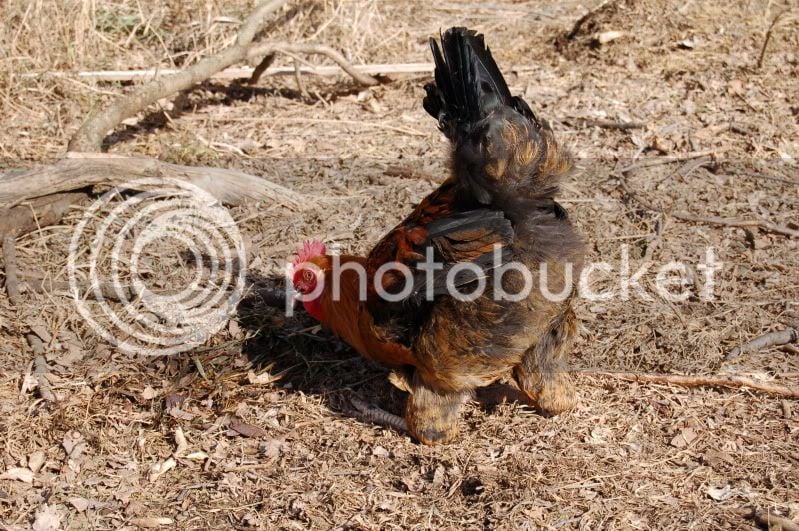 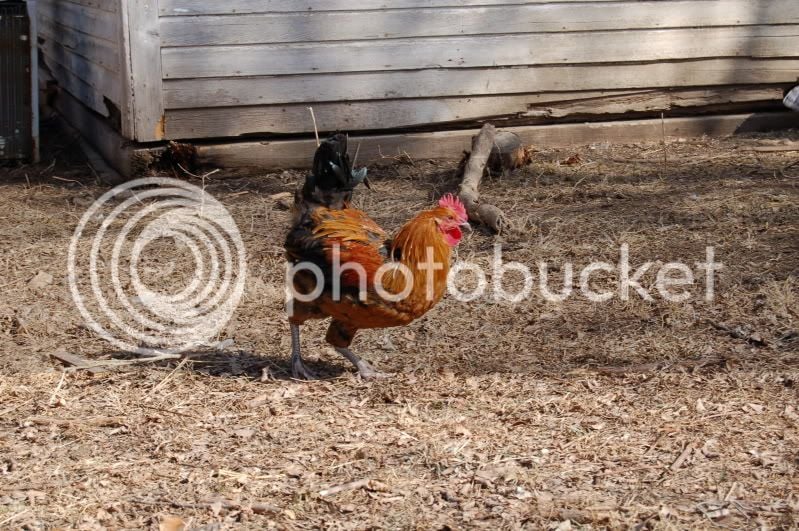 Copper standing tall, but is unsure and wobbly (after 6-7 applications of CS) 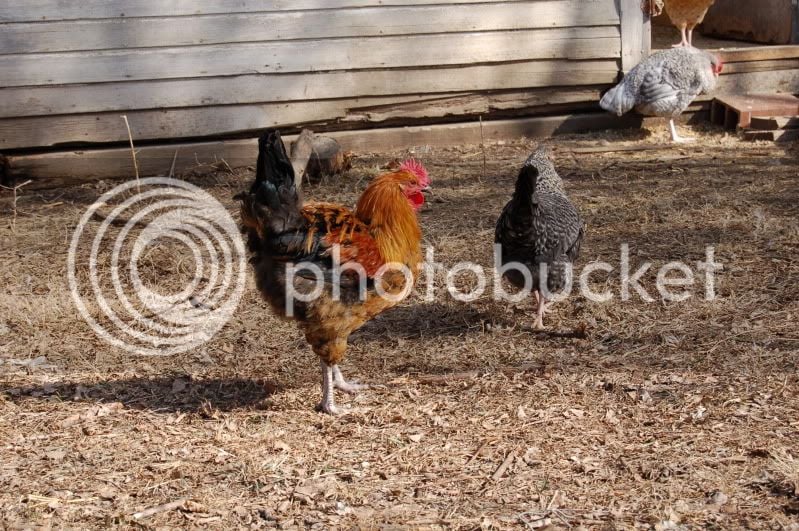 Copper after several weeks of 3-4 applications per week of CS. He's healed and he's walking normally. 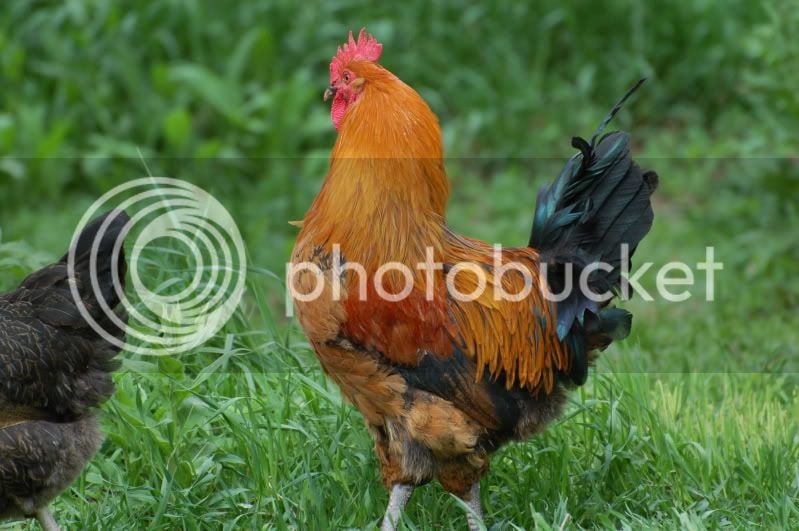 Our beautiful Copper, now able to perform his manly functions and walking perfectly.
His recovery brought tears to our eyes of appreciation for his valiant return to health
and the miracle that is CS (plus our positive attitudes) 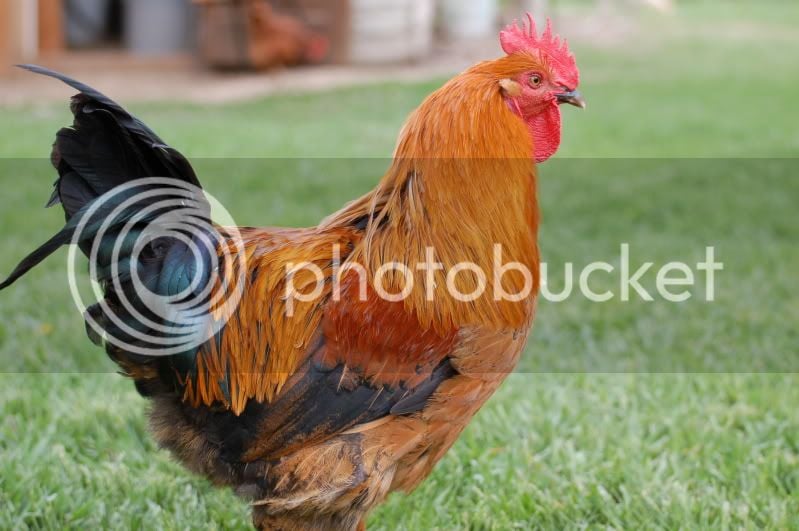 Reposting of my original successes using CS with Marek's
My saga with Mareks:

One of my RIR's began to be unable to walk. Her legs were splayed out, one in front and one in back. I felt terrible for her, so I made sure to pick her up and take her to the feed twice a day. After that I'd take her to the water. I'd leave a little feeder right in front of her so she could eat whenever she wanted. Except for her leg condition and inability to walk, she seemed fine. She ate ravenously. I used to sit in the coop and lay her belly up in the crook of my arm while watching the other chickens. She'd close her eyes and I'd sit there and cry. I figured I'd take care of her until I could see that she no longer wanted to live.

She had feces stuck to her tail feathers because she couldn't move when she pooped. I took her to my bathroom, turned her belly up and with a warm washcloth, I carefully blotted and rinsed, blotted and rinsed. The stuff was stuck so strong that it took a good hour to remove most of it. She just closed her eyes and didn't struggle. Sweet, sweet girl.

Someone told me about colloidal silver and how it killed viruses. People used to use real silverware in the old days for it's sterilizing effect on food. I heard that Marek's was a virus so I gave her a dropper full. She started to get better and in a couple of days, I gave her another dropper full. Her legs started to heal and when I could see that she would be walking again, I assisted her walking. In addition to the colloidal silver, my husband and I did visualizations akin to the ones you may have read about having little pac men eating up whatever of the virus remained.

My dream was that I wouldn't be able to tell the difference between her and the other RIR's I have because she'd be walking normally again. Well, my wish has come true. She is totally healthy and the only way I can tell it's her is because she's a bit smaller than the others having gone through what she did.

Last week I noticed one of my New Hampshire Reds starting to limp. I waited a couple of days to see if she had injured it and perhaps it might go away. The limp was still there and getting worse. I captured her and gave her a dropper full of colloidal silver and within two days, she is no longer limping.

I'm not saying that this is some kind of miracle cure, but with Marek's, everyone is so darned sure that it's fatal, saying there is no cure, but that is simply not true in our case. Oh, by the way, all our chicks were vaccinated at 1 day old for Marek's.

I couldn't be happier, which is why I wanted to pass this on to anyone who is faced with this issue.

That's awesome--glad you posted the pics to show the improvement!

Does anyone know the best place to post this so that other chicken lovers who may be facing Marek's might find it?

That is so awesome!!!! How much CS do you give them? Thanks for sharing!

my little polish hen is about 6 months old and seems to have come down with mareks. i started her on hypercium today and was wondering if i could use the colloidal silver with it. What dosage would you recommend?

Thank you for posting about colliodal silver treatment for possible Mereks.. I am trying this as well as brazil nut, cranberry, turmeric, homepathic St John's wort, diatomecious earth. I appreciate all the advice for natural treatments. I hope and pray Gertie makes it, she is such a sweet girl.

Lady Badlands, do you do every other day? And why is that?

It wasn't easy to find this thread, about colliodal silver as a natural therapy for possible Mereks disease, but I am grateful for hope! Thank you, for sharing your story and photos of how you chickens recovered from paralysis with colloidal silver. This was my last hope for a natural cure as she has been sick for 2 days and an anwer to my prayers. .
Last edited: Aug 18, 2013

Well the silver I believe is helping with keeping away infection. I found a large wound under her wing. The baths and other things probably saved her life. There wasn't any smell or puss I noticed, it looked like it was healing nicely. She still cant walk and is tired a lot but she is eating and drinking on her own and outside once she gets her balance, her tail is up and she is grooming, and eating. I have her separated from the other chickens and she sleeps in the house.

I would love to see what people do for holding sick chickens in the house. I am using paper towels over a carpet pad which is pretty clean for indoors, but wondering if there are alternatives.

I think my bird has marek's. Thankfully someone told me about marek's today and I automatically thought about CS and when i looked it up i found this thread. I am hoping to have good results with the cs. I gave my first dose about 40 mins ago. I got a dropper and my bird just drank from it. I also put cs in her water. My question is how long did it take before y'all saw results from the CS? My bird is completely immobile and one leg stuck out and one wing droopy. Thanks!
Last edited: Dec 9, 2013

I know this is an old thread. Just wondering were you get this c and what dose etc. I would like to get some to have on hand. Thanks

Ocular Marek's vs the other kind? Could be both?