I'm not sure if she got stepped on by one of my kids, or if a coon tried to pull a leg threw the wire... but my d'uccle is now lame.

She is eating and drinking fine. She seems to have use of one leg and can move the other. She dosen't use it often, I'm sure it because shes in pain. I can't feel anything broken but maybe a toe, and I can't tell if she has something dislocated.

She can walk if she needs too but it is very close to the ground and with her feet out.

Vet is not an option, if she goes it will be at our hand, but I liked her and want to give her a shot at getting better.

Any Ideas of what I could do to help her.

She is in her own cage right now so she can get to food and water as she needs. Wasn't sure if I should try to bandage her up to put her feet in the right place, or just leave her be and see if she gets better,

I had one of my girls go lame very quickly last summer. She was fine when I let them out in the morning, then an hour later, she couldn't walk very well at all. Like yours, mine was eating and drinking fine. Her poop looked fine. I couldn't find anything wrong with her leg. She just huddled on the ground, moving occasionally to get nearer to the others. I didn't have a cage, so I just put her on the roost every night, and back on the ground every morning. (If I let her fly off the roost, it seemed to set her back.) It was about two months before she stopped limping. Today, there is no sign that anything was wrong. I never did figure it out.

Is yours okay with being penned up? Would she sit on a roost if you put her there? If she is walking, and there is no sign of disfigurement, a splint might make her walk less.

I have only had the one bird in this condition, so maybe someone with more experience can give you a better suggestion. At the very least, here's a bump!

Has she been vaccinated for Mareks? Perhaps do a search and see if the symptoms match that.

so the new questions are, how long do I give her to improve and if she dosen't.... well is she safe to eat??

also where do I get the vaccine?

have you checked the bottom of her foot?
check for any sore, scab, raised area heat or swelling...

is there a problem with the toe?
please describe..

try and confine her to a small area..make sure she is on soft bedding, somewhere safe and out of draft or wet... with food and water close by so she can rest the leg.

Pic of my girl. 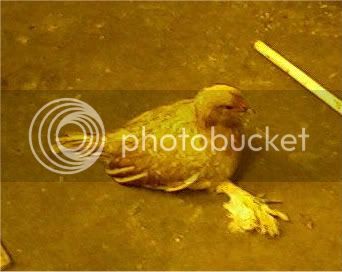 How is she now? That looks like what I've seen pictures of with Mareks. Granted I've never had a chicken with it, so my experience is limited by what I've read.

I have a silkie hen with the same syptoms. I hatched her and her flock mates myself last October, and they spent the whole winter inside - then in the end of January, I found her in a position similar to that of the chicken in the picture. Everyone was still inside at that point, so I consulted BYC and all the responses I got said it was Marek's Disease - but she had NEVER been outside, neither had her flock mates, nor had I added any new chickens to the flock.

So, I isolated her, worked with her several times a day trying to help her stand, and I placed her in a basket so she could reach food and water, but otherwise, she hopped around on one foot. Then about 6 weeks later, she was back on her feet for no apparent reason - so I snuck her back in with the others one night while everyone was sleeping, and she was fine with them for 2 days. Then I found her limping again. She's been like that ever since - its been almost 4 months now, and nothing I do is helping. I've tried the same exercises I did with her before, and even tried splinting the leg at one point, but that just seemed to stress her out. There is no swelling, no sores, no heat, nothing - she just can't seem to move anything from the hock joint down.

I'm wondering now if she slipped a tendon (I didn't even realize that COULD have happened until recently), and maybe its too late now to help her. So, I pick her up out of the coop and put her on the ground next to the water every morning, and several times a day, I place food right in front of her - then I pick her up in the evening and put her back in the coop. She lives alone, because otherwise, the others just trample on her. She is very tame from all the handling, and is my favorite, but I can't help but wonder about her quality of life.

I also have a serama rooster that came up lame like that a couple months ago. He limped for a week or so, and then started walking normally again. No such luck for my silkie tho.

Sorry to be so long winded, but I'd be interested to know what happens your chicken, Fancie - so please keep us posted!
Last edited: Jul 1, 2009