Starting a thread here now that I actually have my chicks!

The Beginning:
Fall 2017 we bought a property with 9+ acres so I could bring my horse home. Shortly after I got the itch to get chickens. I spent the winter months researching and planning for the chicks to come home over spring break (a long hard wait).

The Coop:
Though I have a very handy family, no one believed me when I told them what size/shape etc I wanted... so I ended up buying a shed turned dog run off of craigslist and convincing my husband to help me haul it home. Some major renovations later it is chicken-ready, thanks to some nice weather weekends and help from my little brother. I wanted it to be ready so after the chicks spent about a week inside I could finish brooding them in the coop.

The Brooder:
I converted a medium dog kennel into a brooder, which in hindsight wasn’t the most convenient choice, but i do feel very comfortable knowing g my chicks are safe inside. I chose to use the MHP for heat for my chicks.

I picked up my girls. Two Barred Rocks, two Gold Laced Wyandotte, and two Rhode Island Red pullets. There is a smaller hatchery in Missouri, Heartland Hatchery, that brings chicks to feed stores relatively close to me on the weekends. I ordered the girls on Thursday (hatch day) and they were ready and waiting for me on Saturday. They were pretty peaceful on the drive home, in which I was sweltering because I was keeping the heater on for their comfort!

Got them home, checked each of their booties and then dipped their beaks into the water as I put them in the brooder. They all took some nice long drinks, got plenty of food, and then I put them under the heat pad so they could find out where the warmth was. Watched them for about 30 mins and everyone had figured out the lay of the land.

Day 1:
I had steeled myself in case of a loss overnight, I knew it wasn’t out of the question. I came out and 5/6 were happy as clams. My littlest BR was not, however. She was on her side and couldn’t seem to stand. When I set her upright she would just stumble sideways and fall over. I held her and offered her some water, then gave her a drop of NutriDrench, offered a bit more water, and tucked her back under MHP. She was still wobbly about an hour later, but I held her upright with her legs tucked underneath while giving her some food and water and she didn’t seem distressed about it. She could stand when I set her back in the brooder, but still didn’t seem too sturdy. I decided to let her rest and check her again later. Much to my surprise, she bounced back just fine. Little Wobbler pulled through and is holding her own with all her sisters on the morning of day 2.

Day 2 I removed the soiled puppy pads and replaced them, topped with a layer of pine shavings. The chicks are enjoying pecking at their new bedding. The most fun game of today is to exit the back opening of MHP, hop up and over to the front, and dive bomb an unsuspecting victim on the other side!

The ride home, I bought a wool sweater at goodwill in hopes it would help keep them warm: 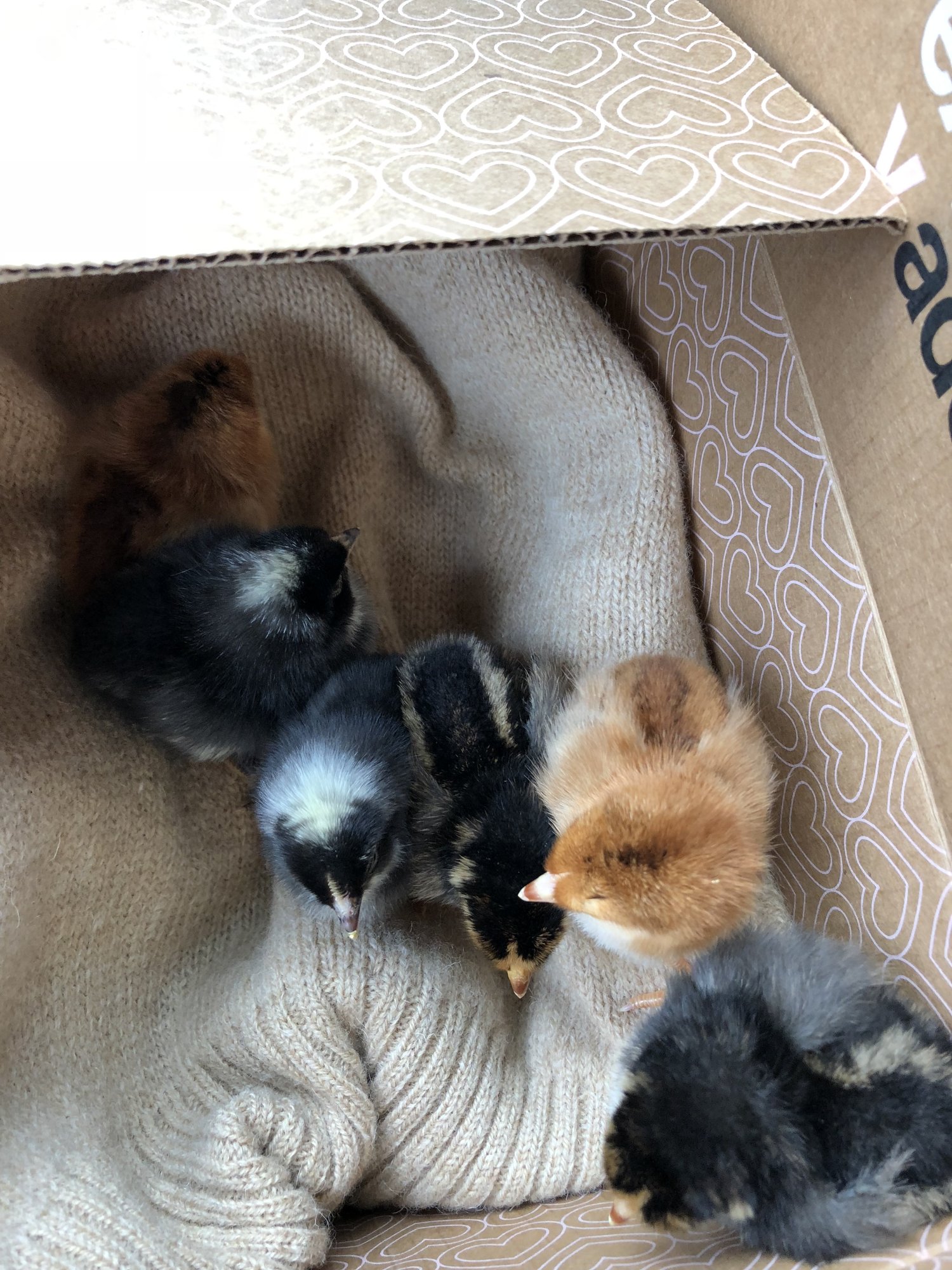 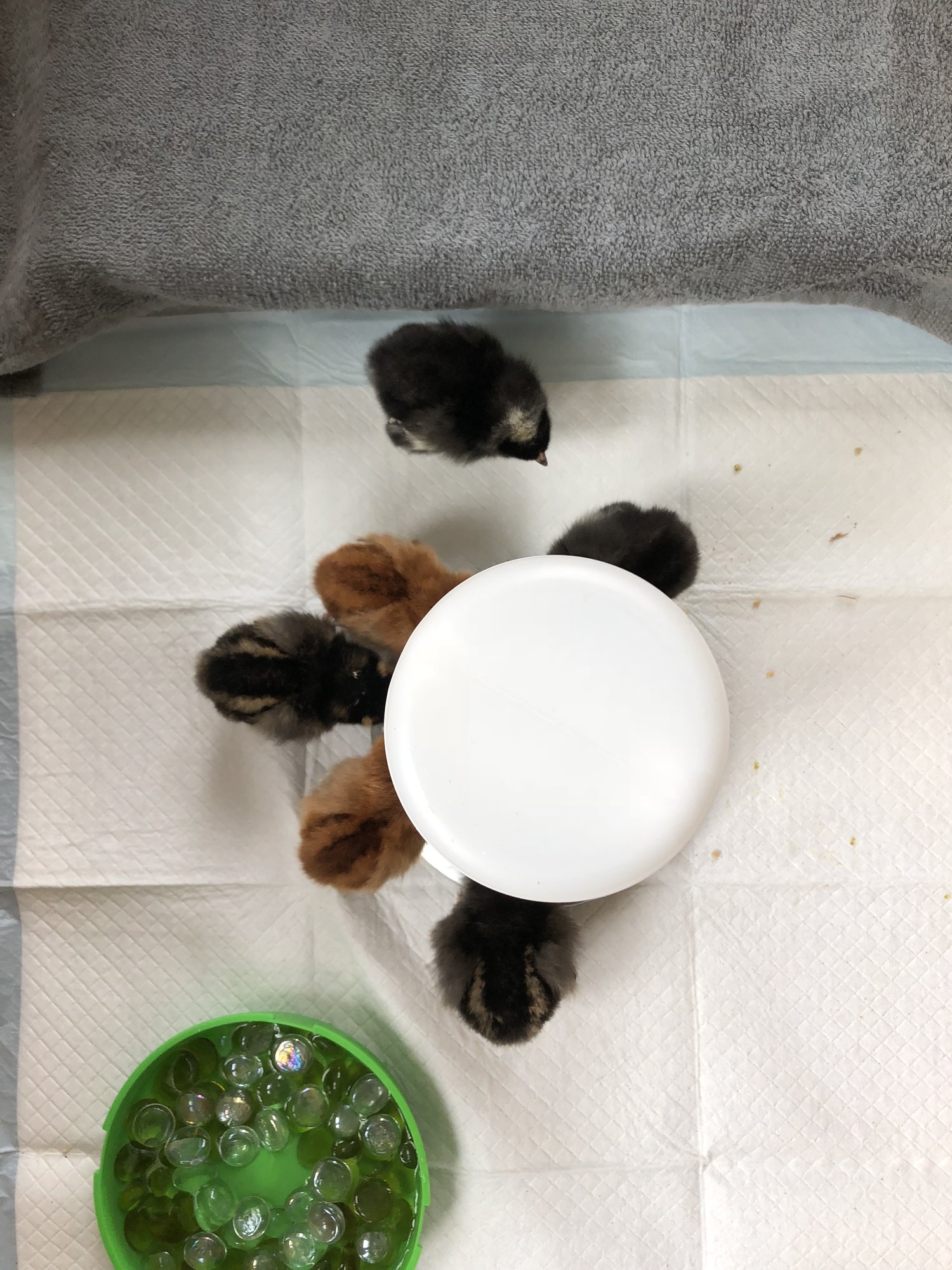 A photo series entitled “why it’s a good idea to put marbles in the water”: 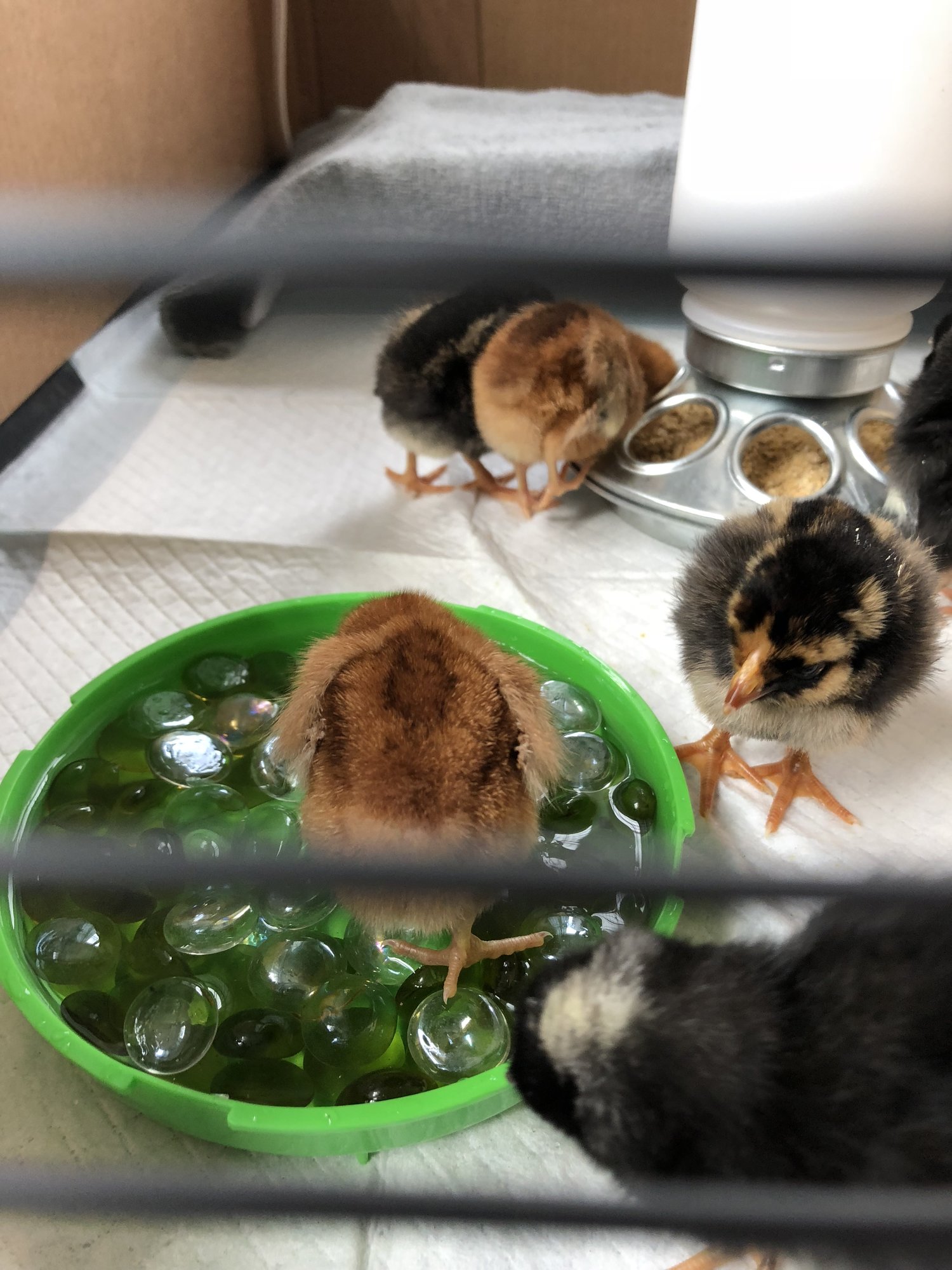 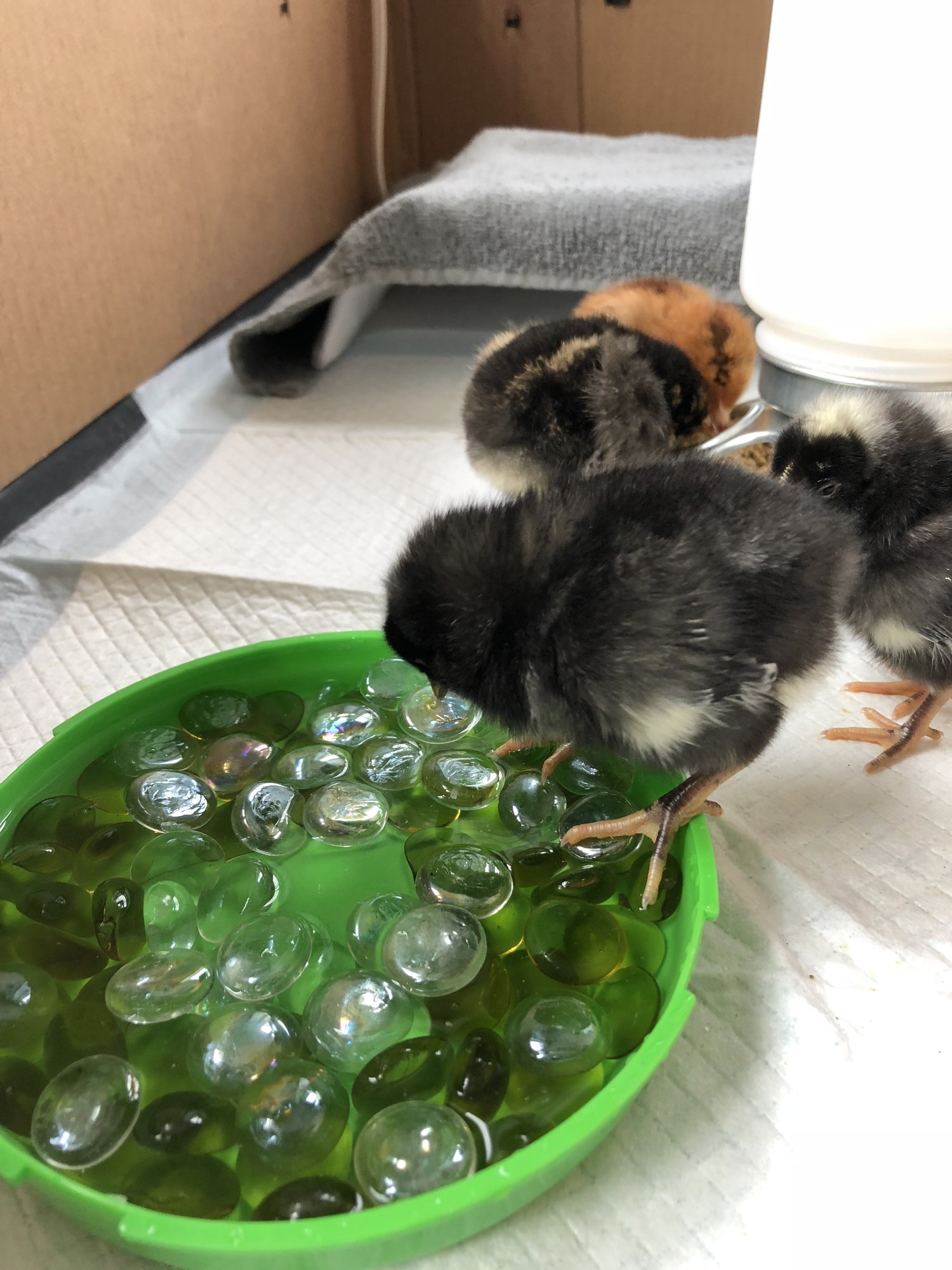 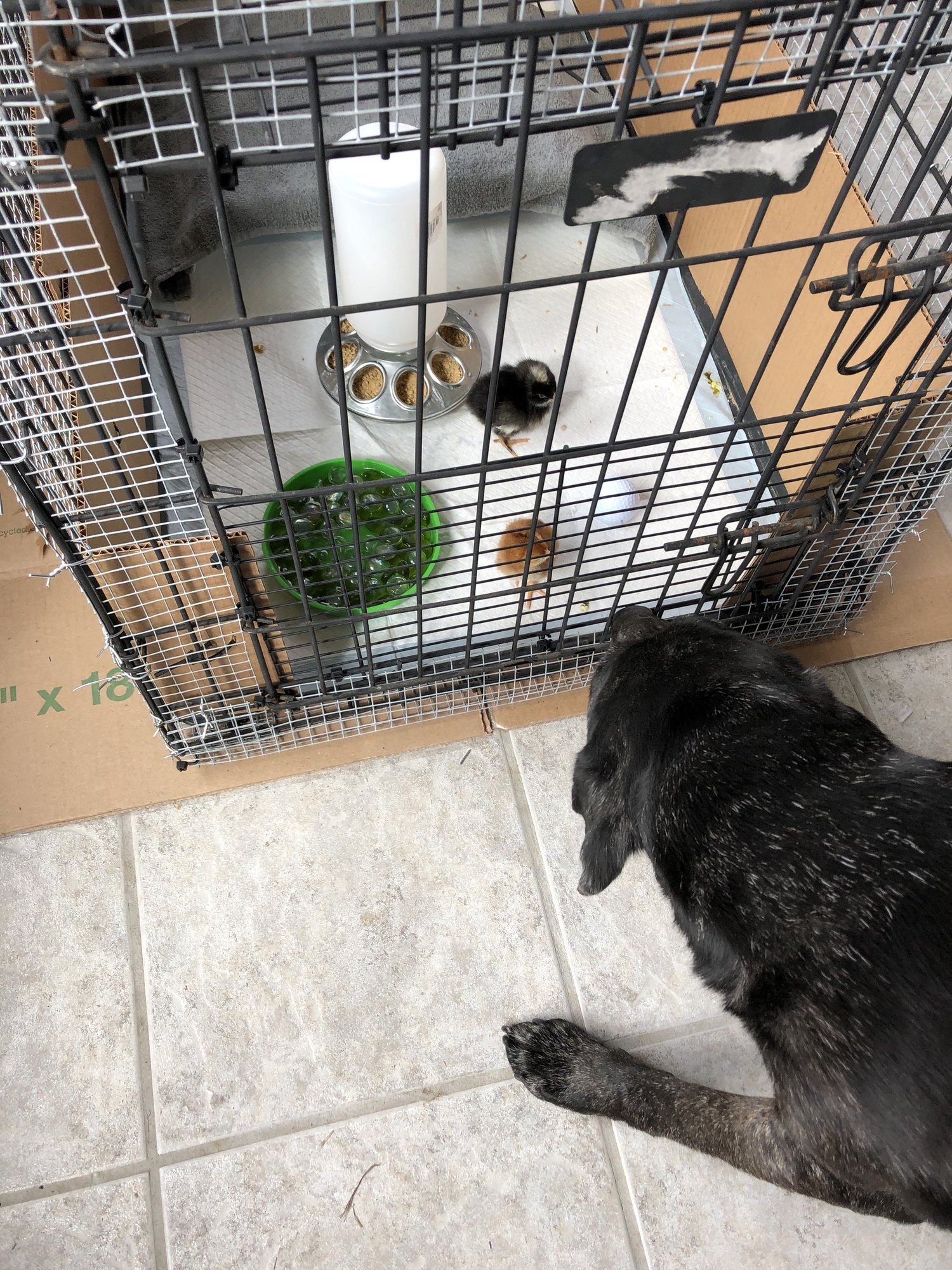 A shot of everyone with their new bedding: 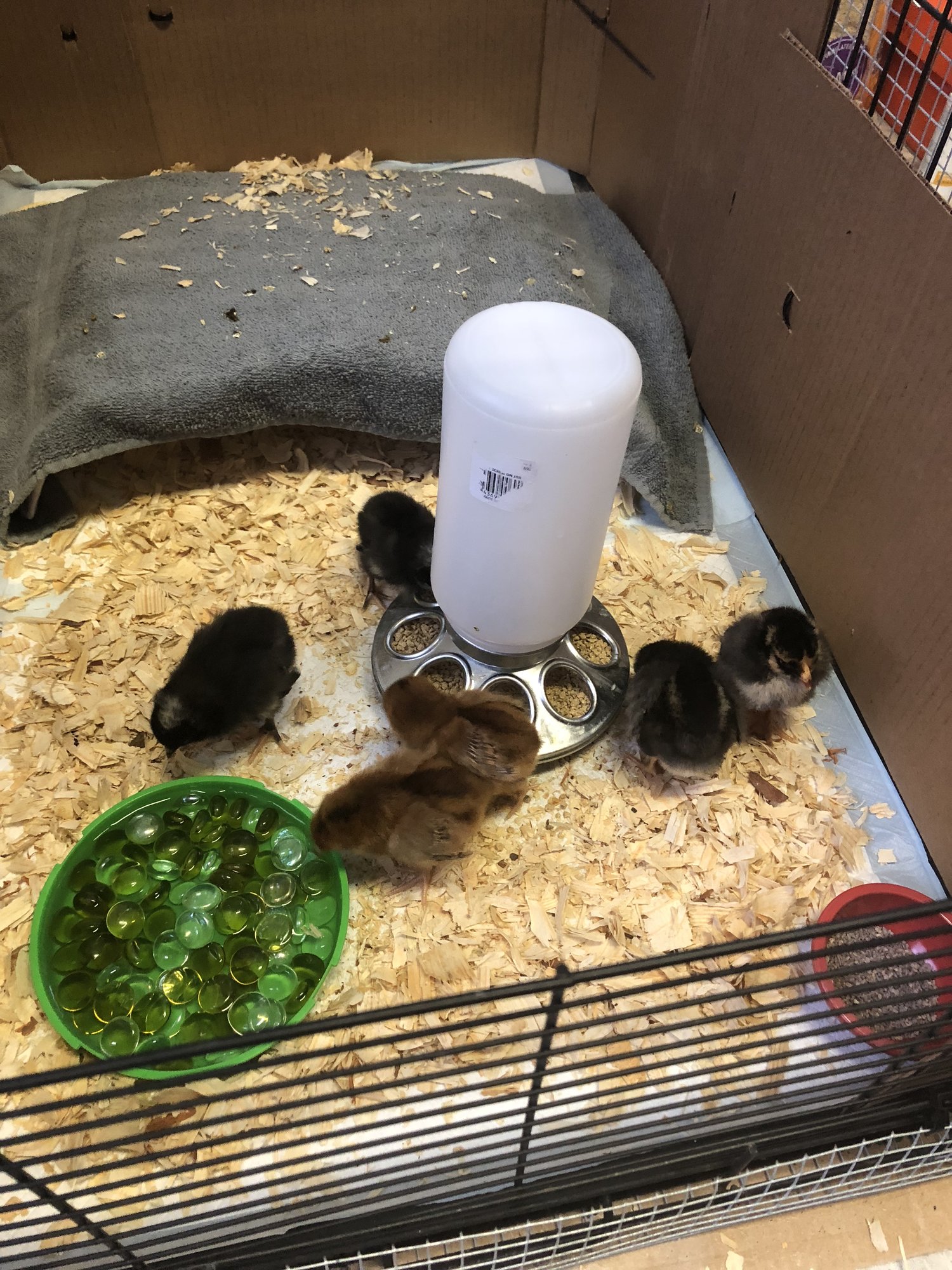 So cute!! Love the marble idea! Like the open concept over just a normal watered, plus no way for drowning!

Yesterday was day 8 at home (not counting "gotcha" day!) and I moved their brooder with the heating pad out to the coop early in the day. They didn't really seem to notice once they were in there probably due to the fact that their immediate environment didn't change at all. In the afternoon I opened the big coop doors to let some sunshine down on them while I groomed my horses and they seemed to really enjoy that. They're much more lively now and exploring their little world a lot more! They are also drinking much more so I changed their water dish to a proper waterer- which of course seemed to them like a big scary intruder.

Of course last night we had the first thunderstorm of the spring, and though my coop seemed fine with the light rain we had earlier in the week I was afraid of the inside somehow getting wet- I hurried out just after I woke up to check on everyone and they were snuggled in and just fine- though they seemed a little peeved at me for shining the light in. Their wing feathers are coming in now. I will update with more recent pictures this afternoon.

It sounds like you're off to a great start with your littles! Thanks for sharing all the photos

It wasn’t until I had looked back at my original pictures that I had realized how much they have really grown! They’ve also grown to be much more wary of me but I’m just Taking my time there. 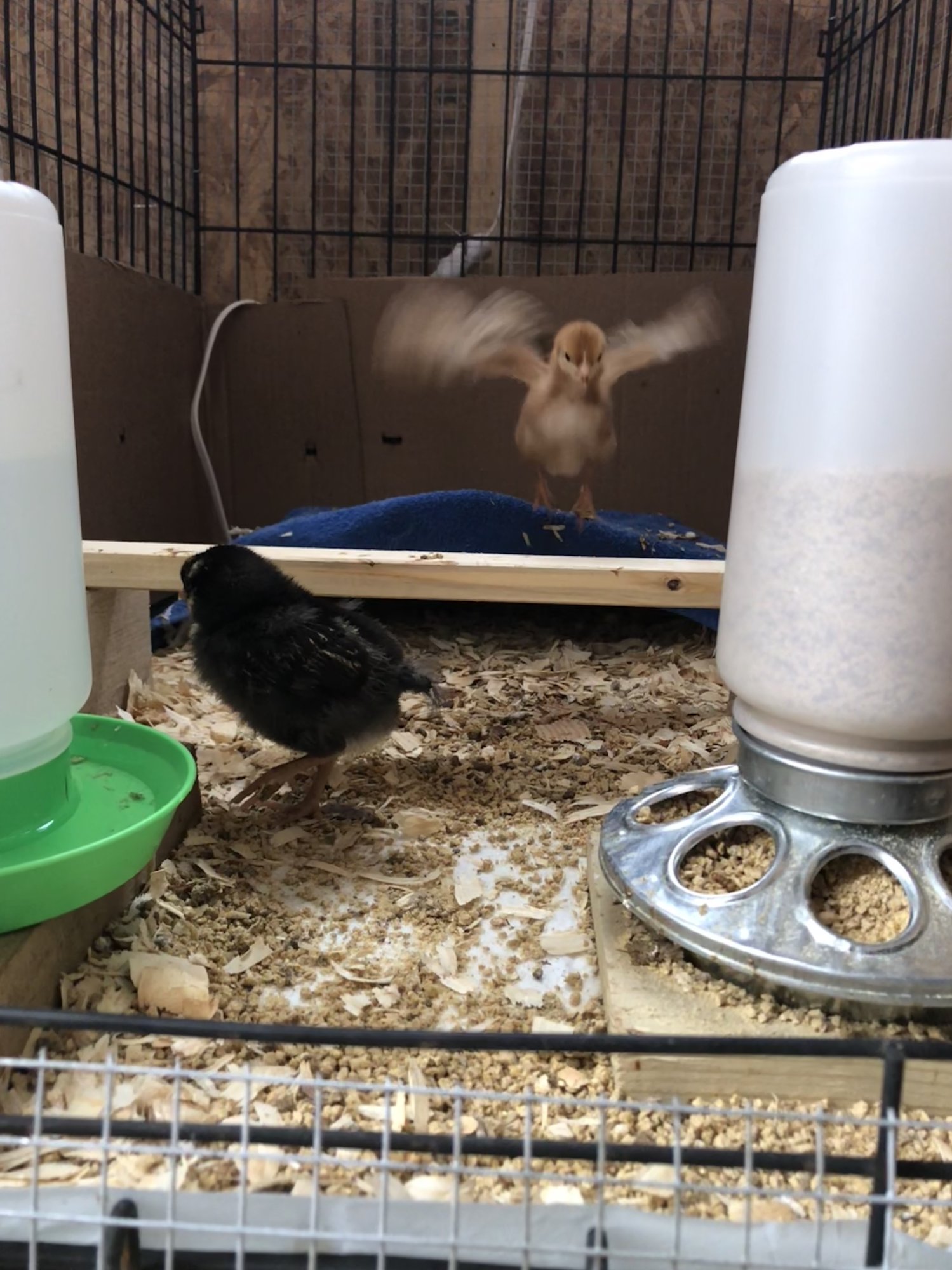 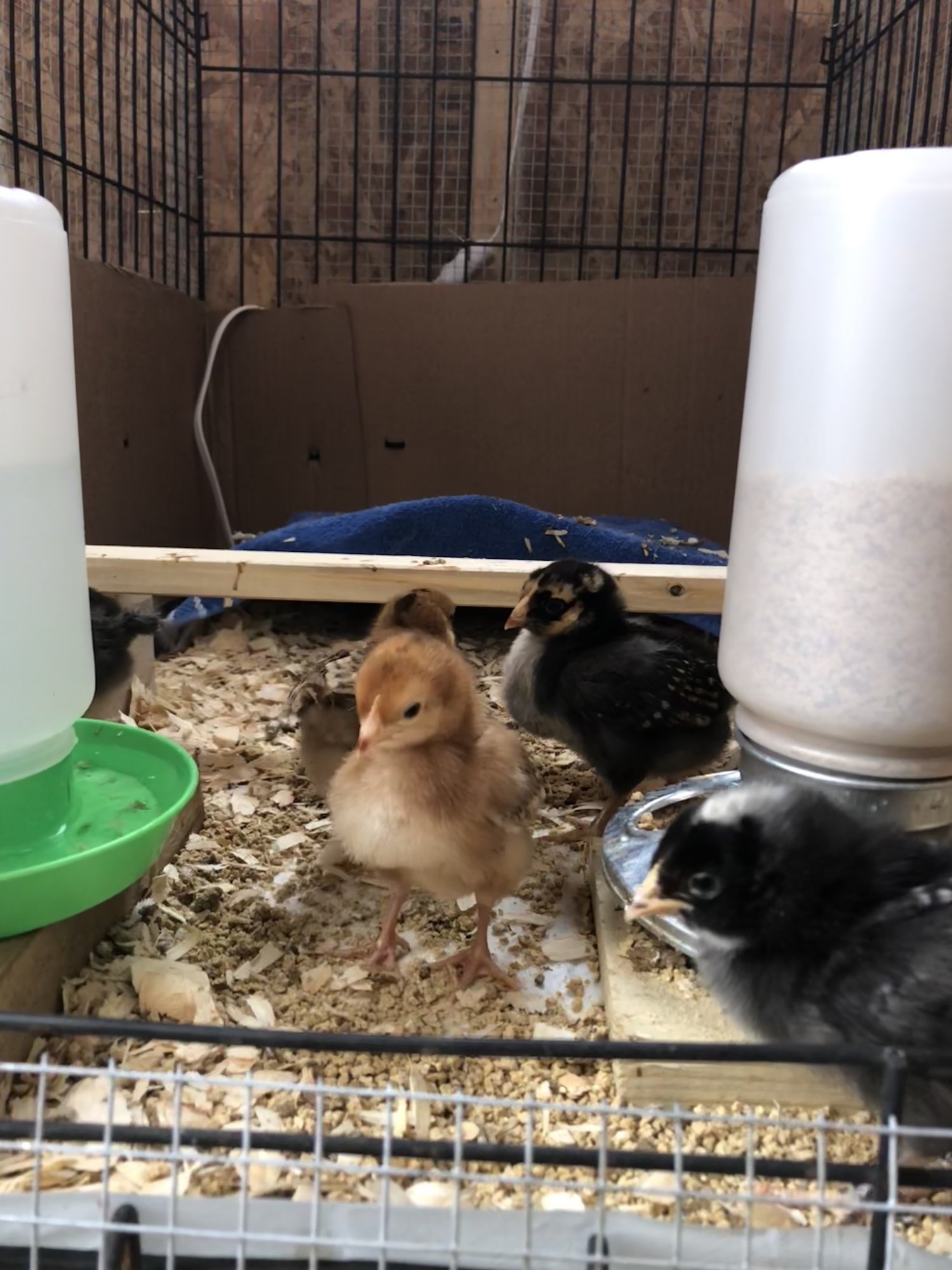 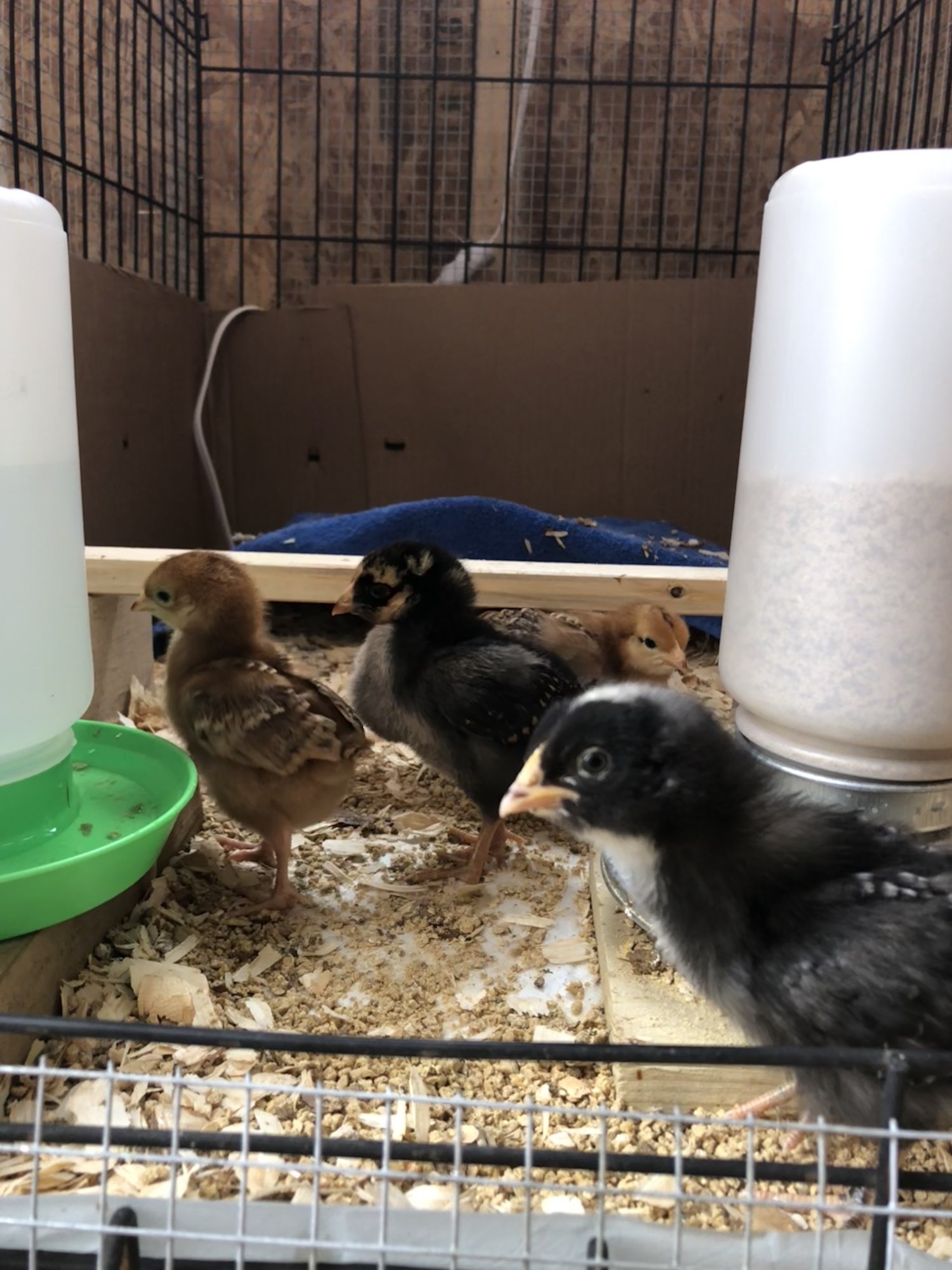 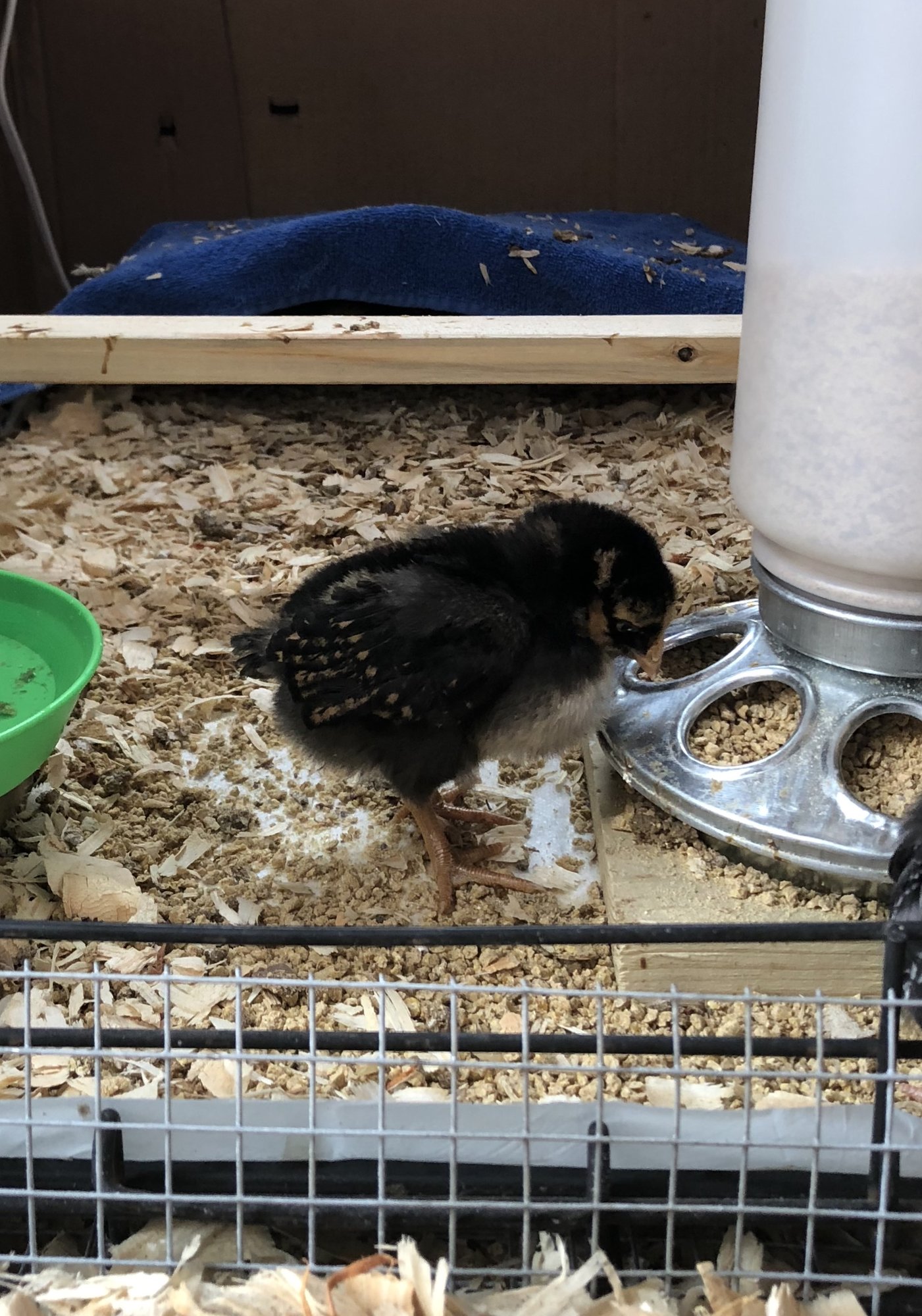 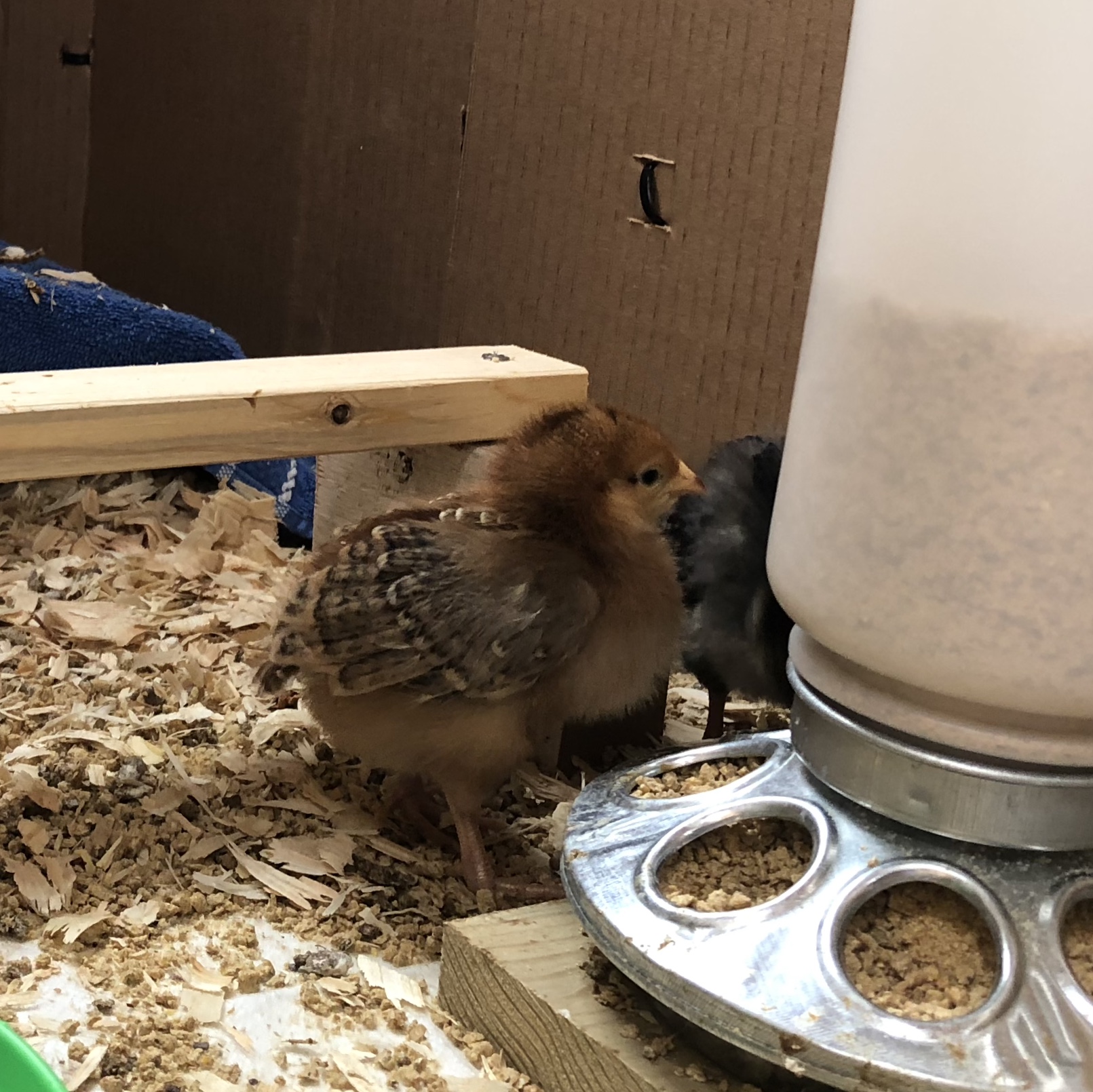 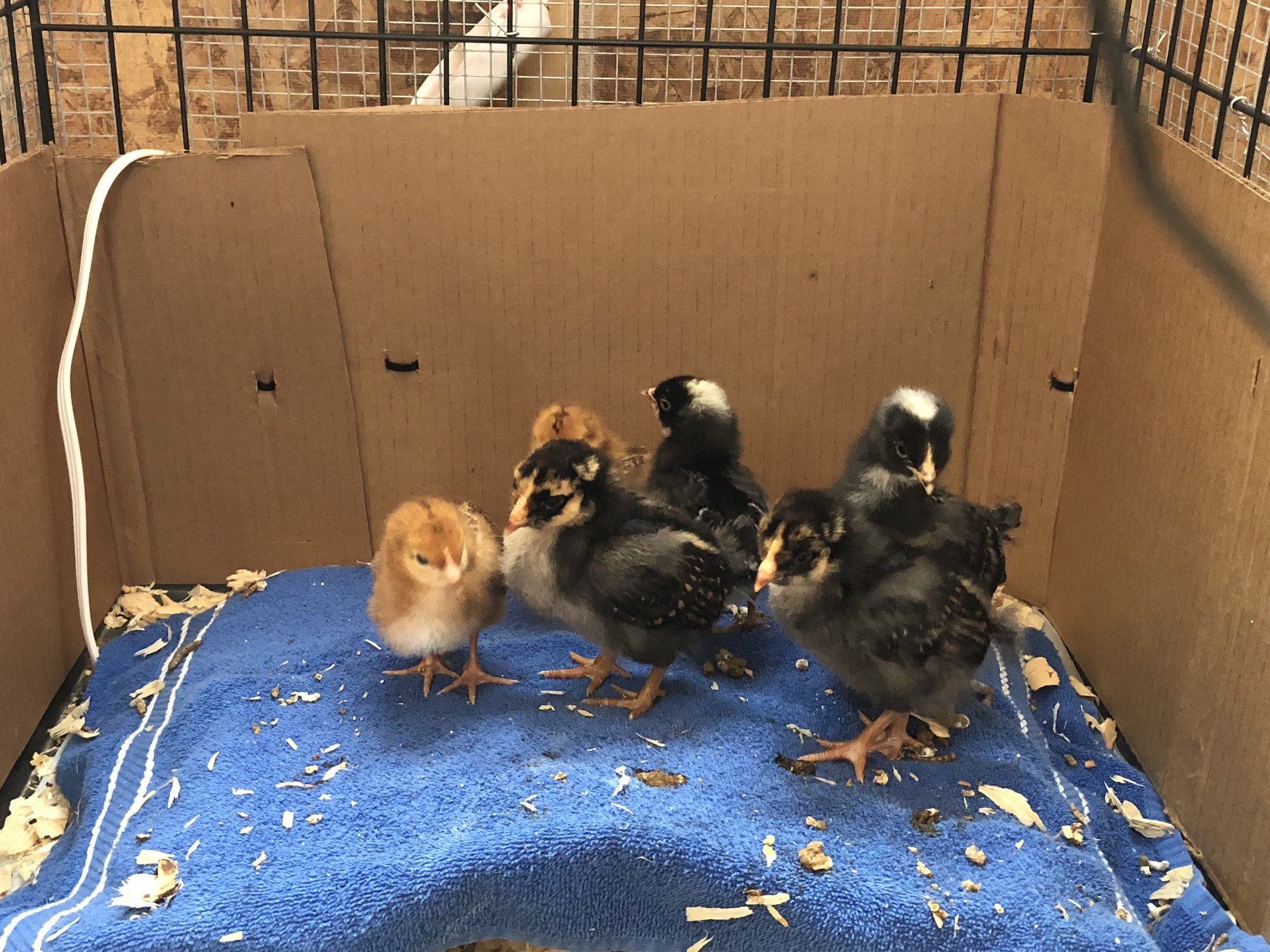 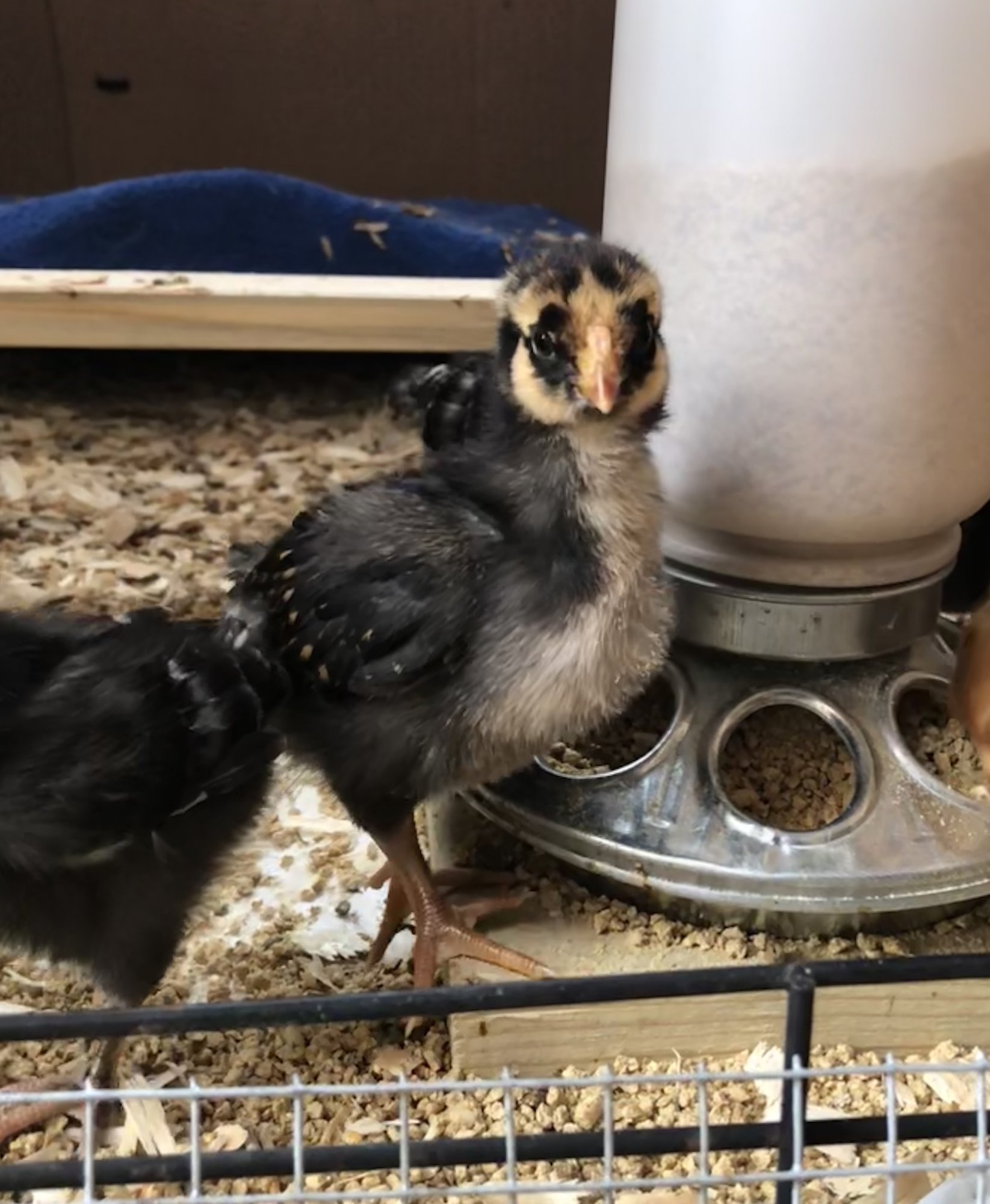 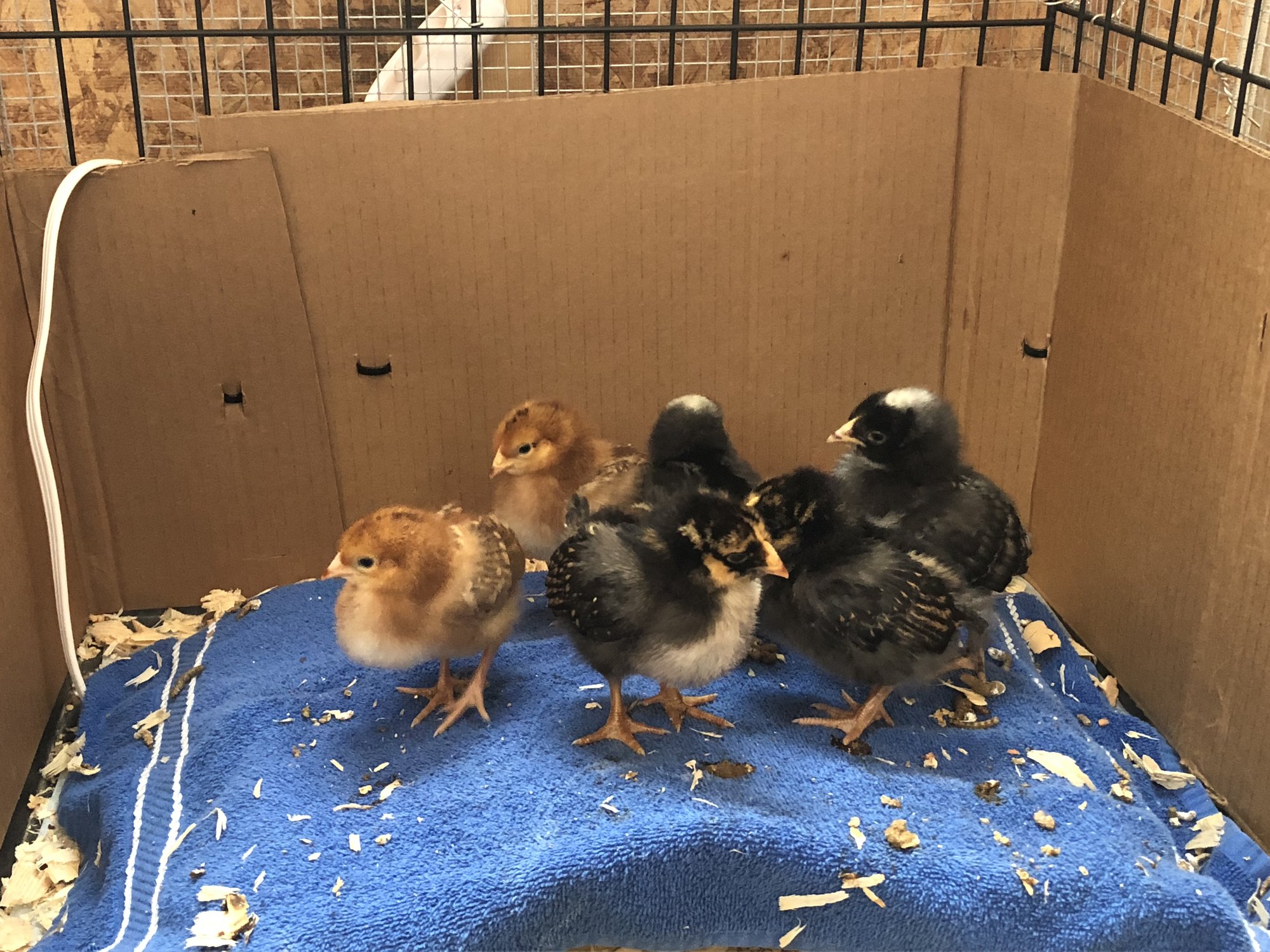 Fun photos, thanks for sharing them!

Growing like weeds now! The kennel was taking up a lot of space in the coop and they were taking up too much space in the kennel, so they got the whole place to themselves starting on Tuesday! 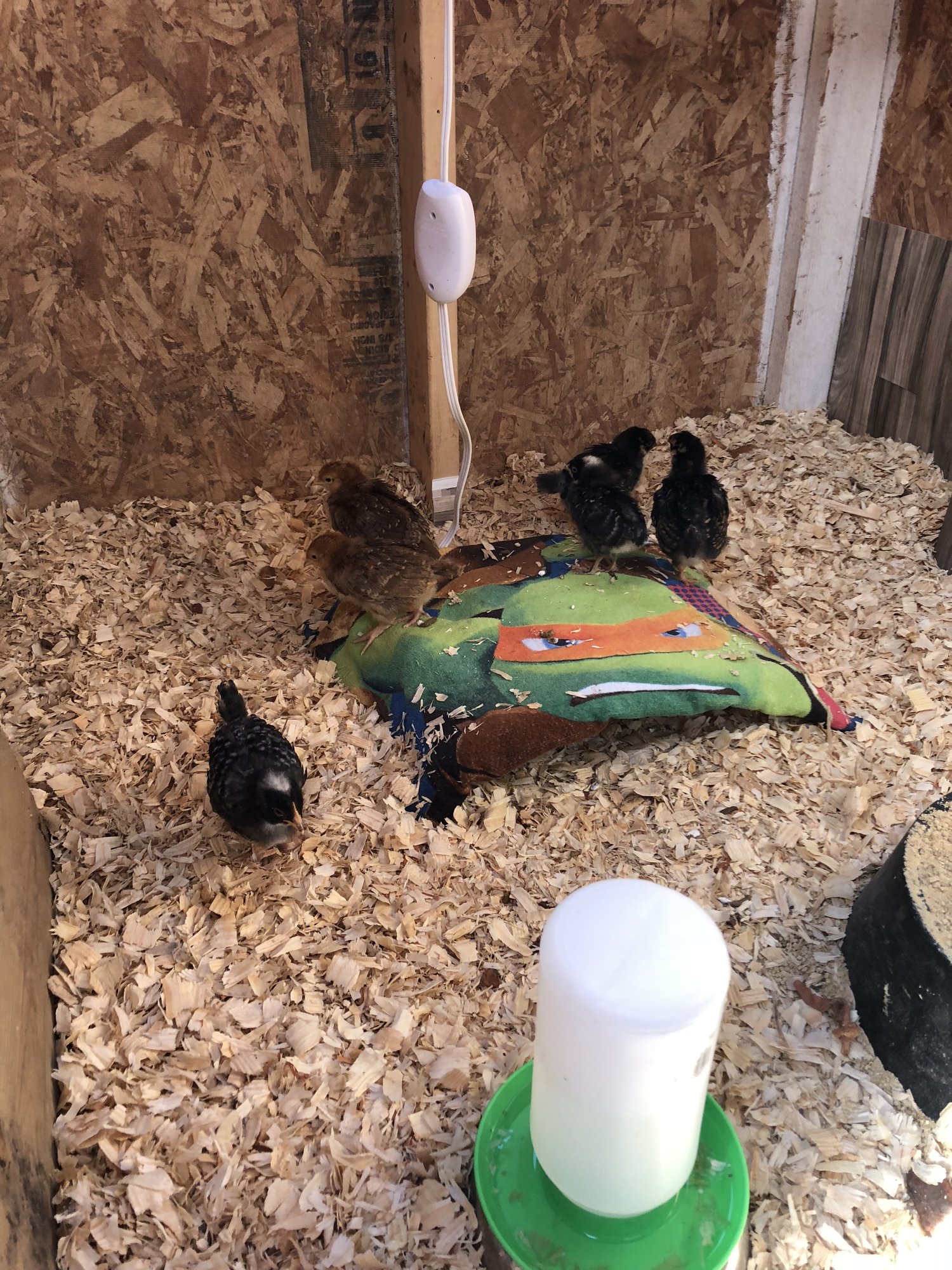 My “solution” to them wasting feed... I have since changed this a bit 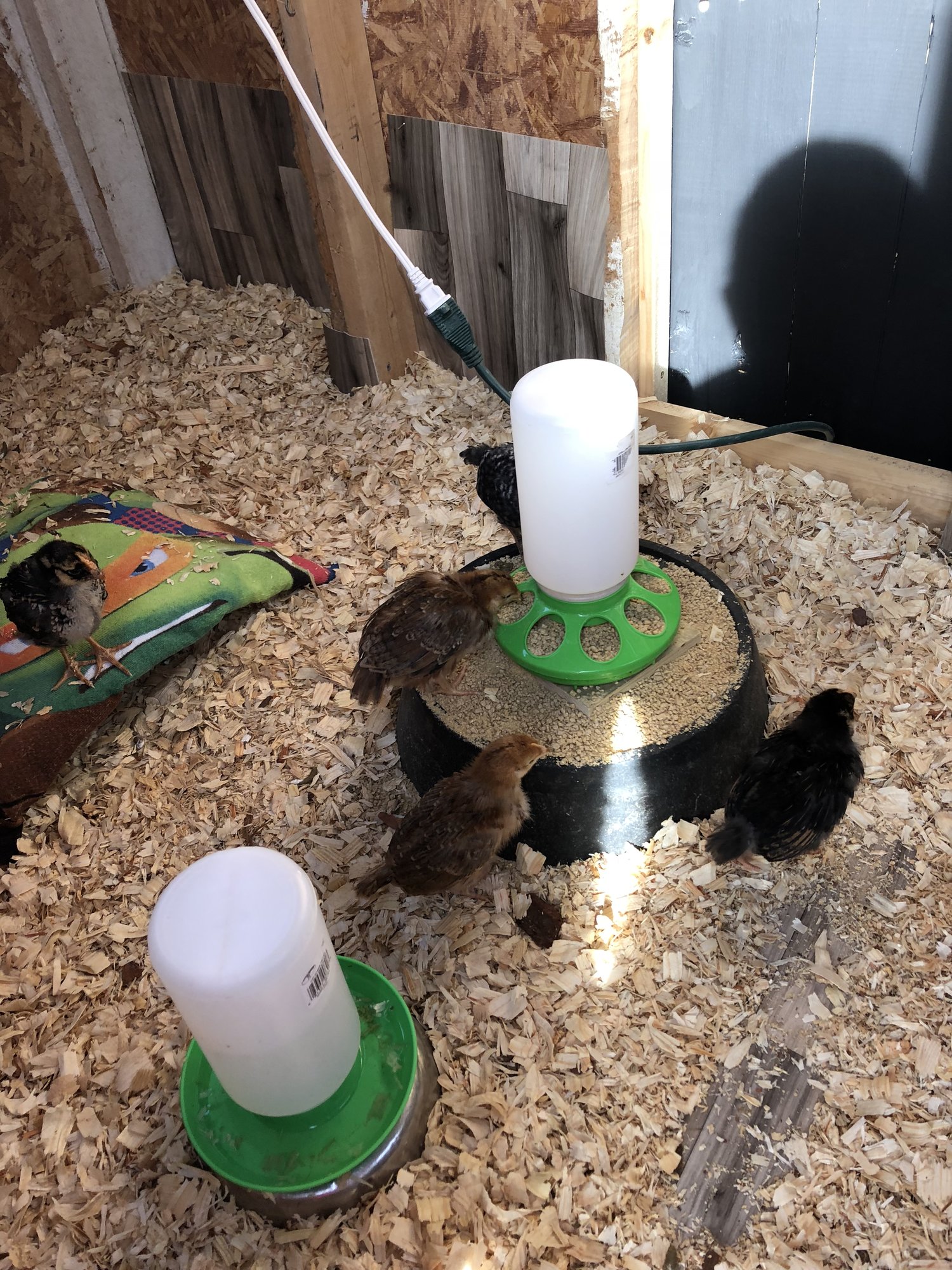 Pics from today (3 weeks old exactly):
Bertha (my big barred rock) thought the chunk of grass I set in there made a perfect nest! 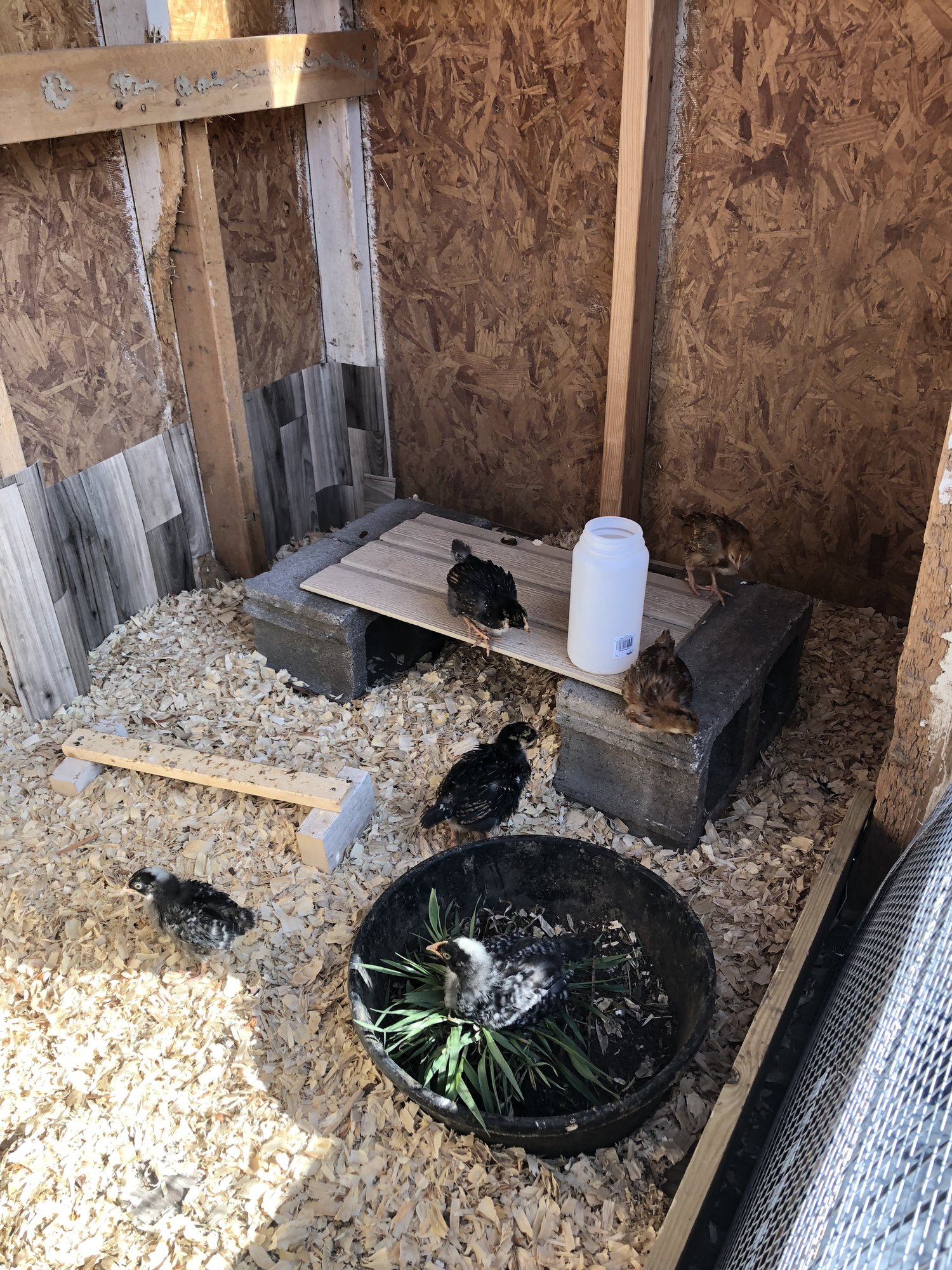 Everyone trying to get in on the dirt action: 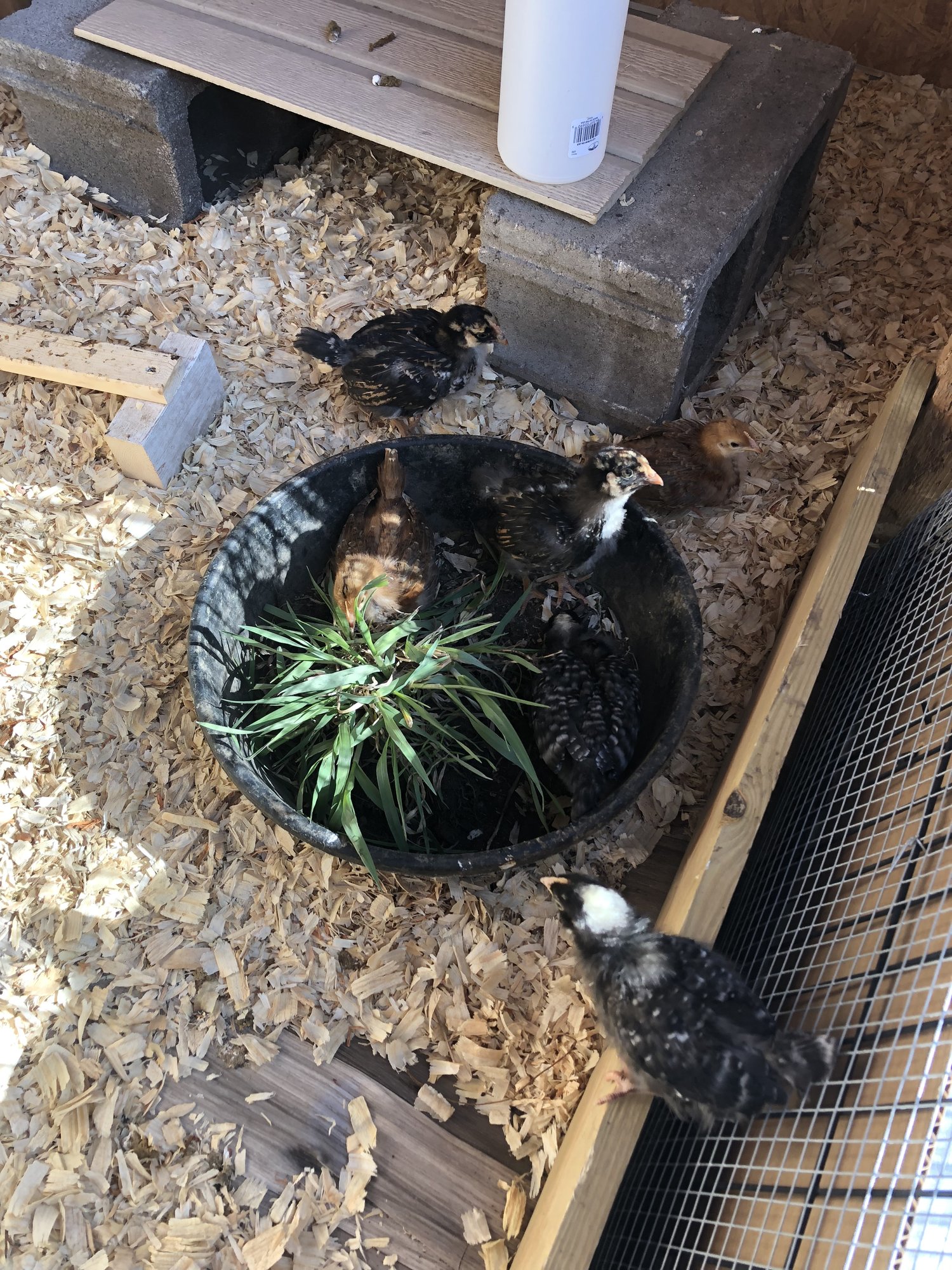 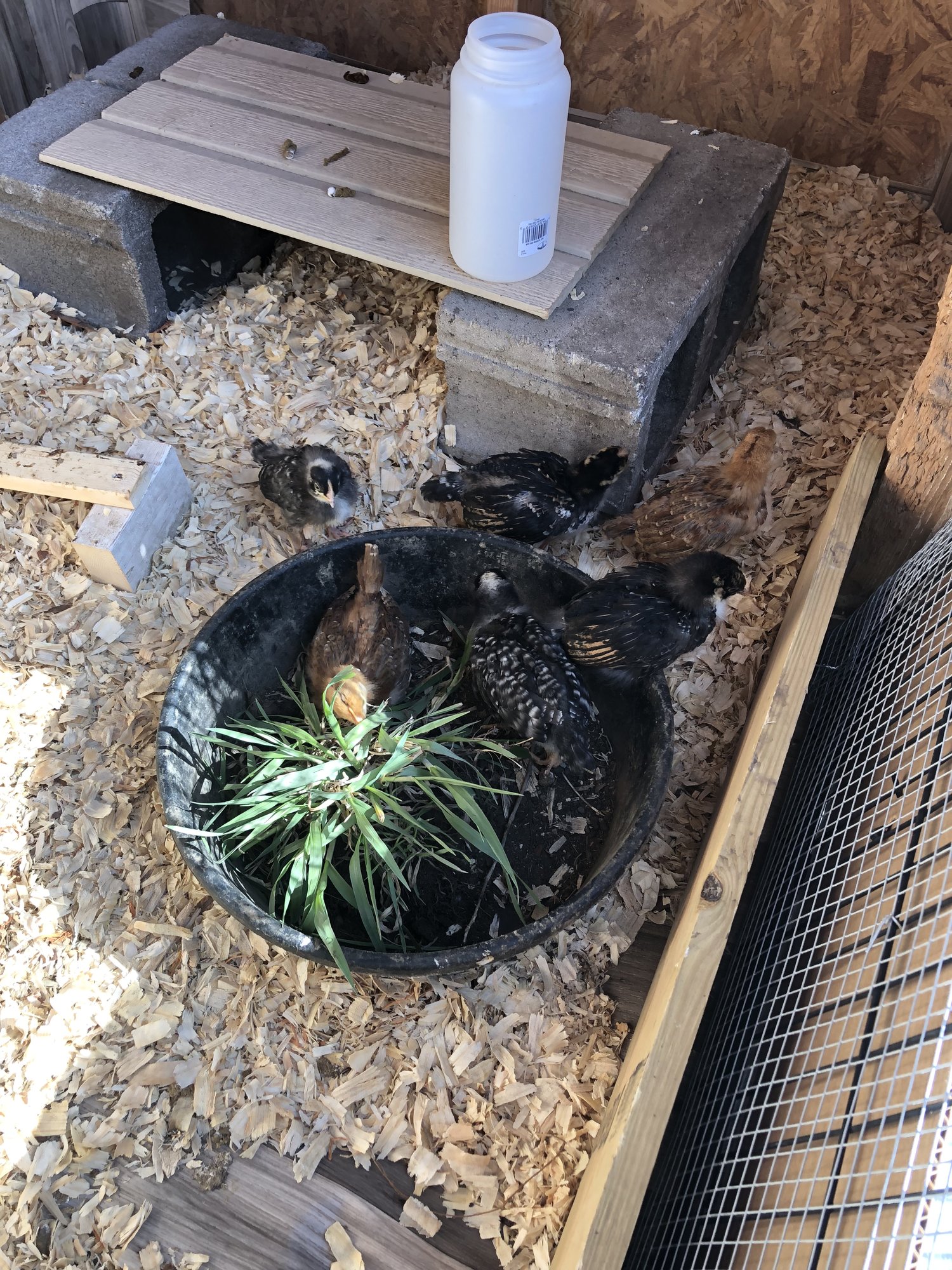 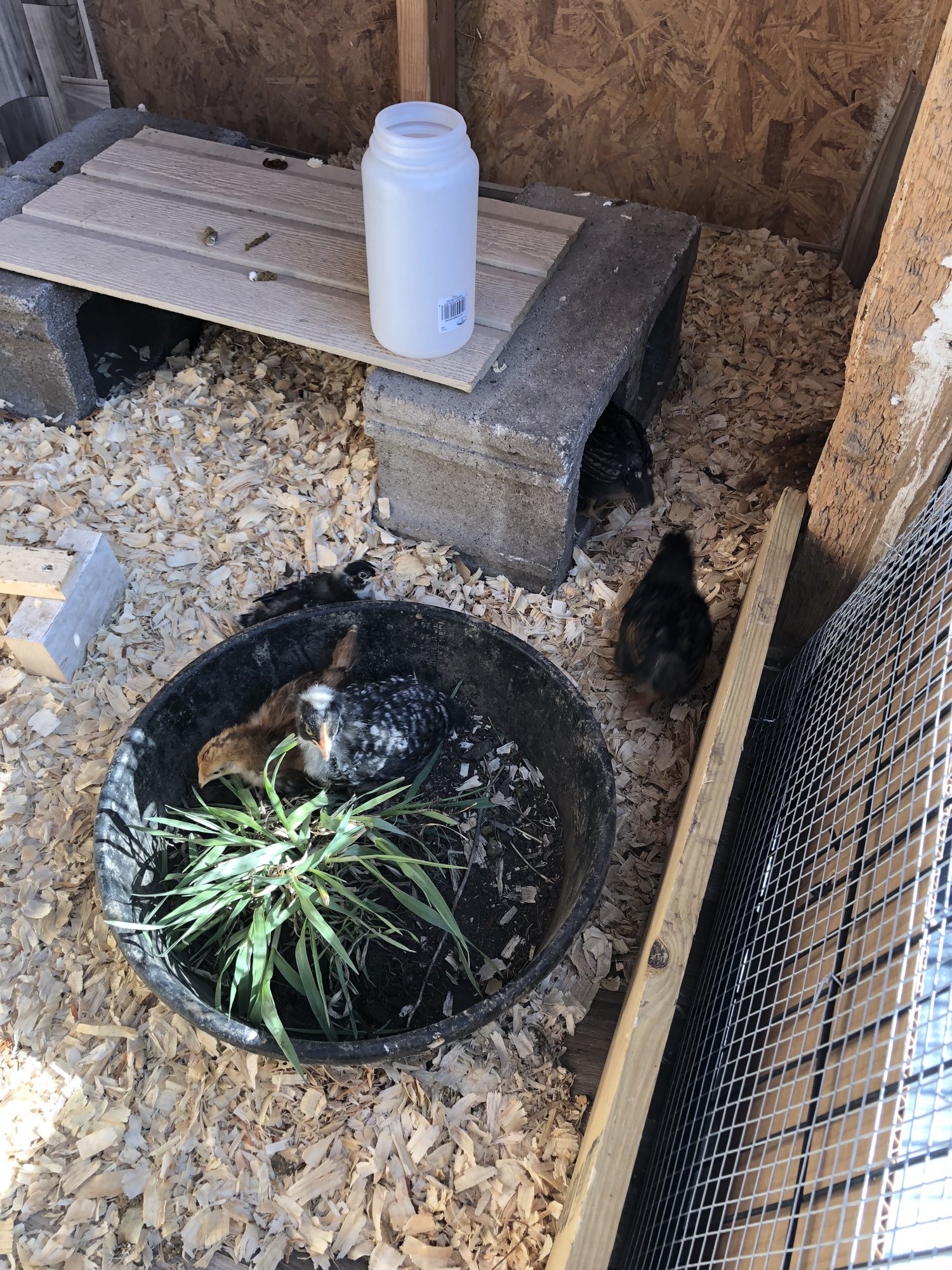 Soooo cute!! My chicks had NO interest in a pan of dirt! I

what happy chicks - how cute

Got a new bowl of dirt! Boy I didn’t realize how exciting it would be for them! Also, you can really see how tiny my one barred rock is in this video. I believe they’re all the same age because their feathers have come in the same- but that little gal is just so small!
https://www.facebook.com/lkgreer12/posts/10104854792997881

Kiwi- the story of a sweet chick
2