Hi guys...was in another thread earlier trying to help ID some chicks and it made me wonder about this little chick I have been taking care of at work (TSC). FYI-I'm pretty new to chickens. Fell hopelessly in love with them working my first chick days in the spring and now the hubs is building a coop for us to start our own flock!

Anyhoo...This little guy or gal came in a shipment of Buff Orpingtons last week on Wednesday, making it about a week old. I didn't think anything of it until yesterday when a coworker thought it might be in distress. I quickly brought it to my little hospital brooder in the back to monitor him. He cussed me out for about 15 minutes until I brought another Orpington chick to hang out with him so he wouldn't be lonely. While checking him out, I noticed he had feathered feet. He appeared to be just fine, just noticeably smaller than all his bunk mates. After about 24 hours I returned him to the brooder without incident. He's a little darker than the orpingtons as well. I just assumed he was a light brahma since he had hairy feet and because we've been getting so many of them lately...but I just compared him to a brahma and the coloring on wings isn't quite the same. He only has 4 toes. In the group shot below, he is the darker yellow one on the far left. Any ideas?

This has nothing to do with anything but I absolutely love this little fella. He (or she) is hilarious. I wish my coop was built so I could bring it home like NOW. 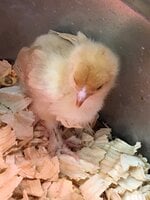 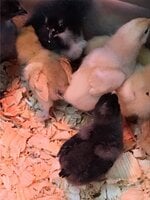 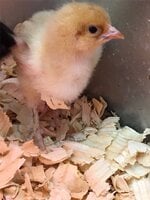 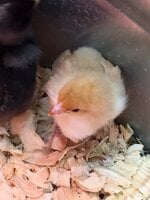 You can do what I did- tell hubby I ordered chicks and need a coop built by they time they reach 8 weeks or be happy with house birds hahahaha.

shawnanjohn said:
You can do what I did- tell hubby I ordered chicks and need a coop built by they time they reach 8 weeks or be happy with house birds hahahaha.
Click to expand...

Is it a cochin? Im new at this but am raising some cochin and that would be my uneducated guess.

Chris-n-Kate said:
Is it a cochin? Im new at this but am raising some cochin and that would be my uneducated guess.
Click to expand...

Could be...I googled some pics and he does look a lot like the buff ones!

Does he have muffs? (Puffy cheeks)
Leg color is off for a cochin.
It looks like a golden neck d'Uccle

Breed of this rooster?!