My ostrich died. This is my tribute to her - also a warning of something to watch out for when purch

For those of you that don't know. I bought two ostrich chicks last year. One I was sold with a genetic deformity. She laid in his egg in an incorrect position with her neck bent the wrong way, developing her spine with a kink. The little twist was hardly noticeable when I bought him, but became more and more apparent every day. There was nothing I could do, but hope that it would not twist enough to eventually kill her.

Sadly, at the age of 7 months the pressure on her spine became too much and it snapped her neck and she died. I do not believe the breeder I got her from sold me her on purpose, but I wish he would have picked up on it. Or really, I should have noticed, too. But it was dark when I got her and I was too excited about finally getting my babies after a year waiting for the season.

I raised my chicks from 1 week old and Mormor was so sweet, my other ostrich never was and is coming up in age now and clearly a male. Raising young chicks isn't easy and the mortality rate is high, so I was pretty impressed that both of them made it with only having 2 of them. The fact that Mormor would still be alive if it weren't for her position in the egg makes me even more sad.

My male is aggressive. I love him, but he isn't Mormor. I made this video tribute to her to help me grieve and so that she would never be forgotten. It shows his entire growth process up until the end, so is interesting in that respect. I'm sure anyone can relate who has lost a ratite they loved. I also made it to warn others of this possibility and look for it when purchasing chicks.

Please if you buy a chick, look very closely at their necks. I've spoken with ostrich ranchers and zoo vets and they say this is an extremely rare occurrence, but that it does happen. I just want to get this info out there so you don't end up getting attached to a bird with a death sentence like I did. It's heartbreaking.

And if you love ratites, feel free to subscribe to my channel. Just click on the video when it's over and you can subscribe there. I love sharing them with everyone. I post a lot of videos featuring my ostrich and emus. If you have a YouTube channel with your birds, let me know, I'd love to subscribe. 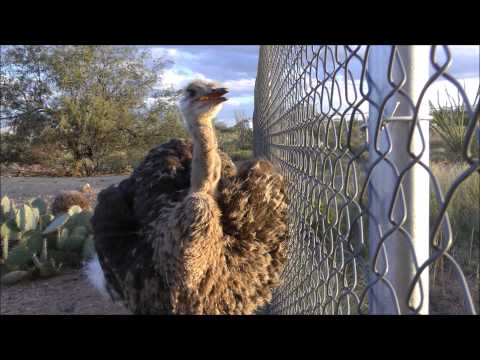 Condolences. It's still quite beautiful what you shared with Mormor, sometimes the best things only last a short while.

Sweet video. Sorry for your loss.

Thank you. I'm glad I was able to give her a happy 7 months. She would have surely been culled at the ranch I got her from, which breeds for meat.

Knock! Knock! G'day! Would you like to buy a vacuum cleaner?