Basically my chook has an inherited genetic trait that adds an extra toe and this one ended up in a terrible place constantly creating friction against one of the main toes which created a decent hole and made the whole thing swell up to about the size of a thumb, she’s a decently small chook mind you.

‘I’ve already cleaned the wound, covered it with some cream under the cover to help it out a bit and that made the outside of the wound better atleast, also filed down the toenail to try and create less friction and she was going good so we let her back with the others after we had her in there changing the bandage every few days and now she’s limping, the wound is healed on the outside but it’s still majorly swollen and you know it’s painful when a chicken limps.

I thought about amputation but I don’t think I could do the sawing it off thing and don’t know that a tourniquet would work on a chooks toe as it would a sheep’s tail for example and, well this chook needs some kind of solution before the whole foots gone.

It has been afew months since the toe was first noticed, I have tried doing what I could with bandaids and such, I have cut off the obviously dead parts and cleaned the wound and tended it till it was no longer an open wound, I was told to come here to ask for help after awhile of asking in other places. 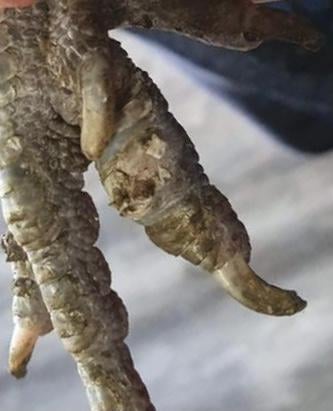 Toe in question, it’s healed on the outside a lot since the initial ingury but she has started limping and the swelling even though less than before is still showing me something inside isn’t healed.

-If anything is confusing let me know, I’m bad at words n stuff.
F

Found a picture of when the wound was open 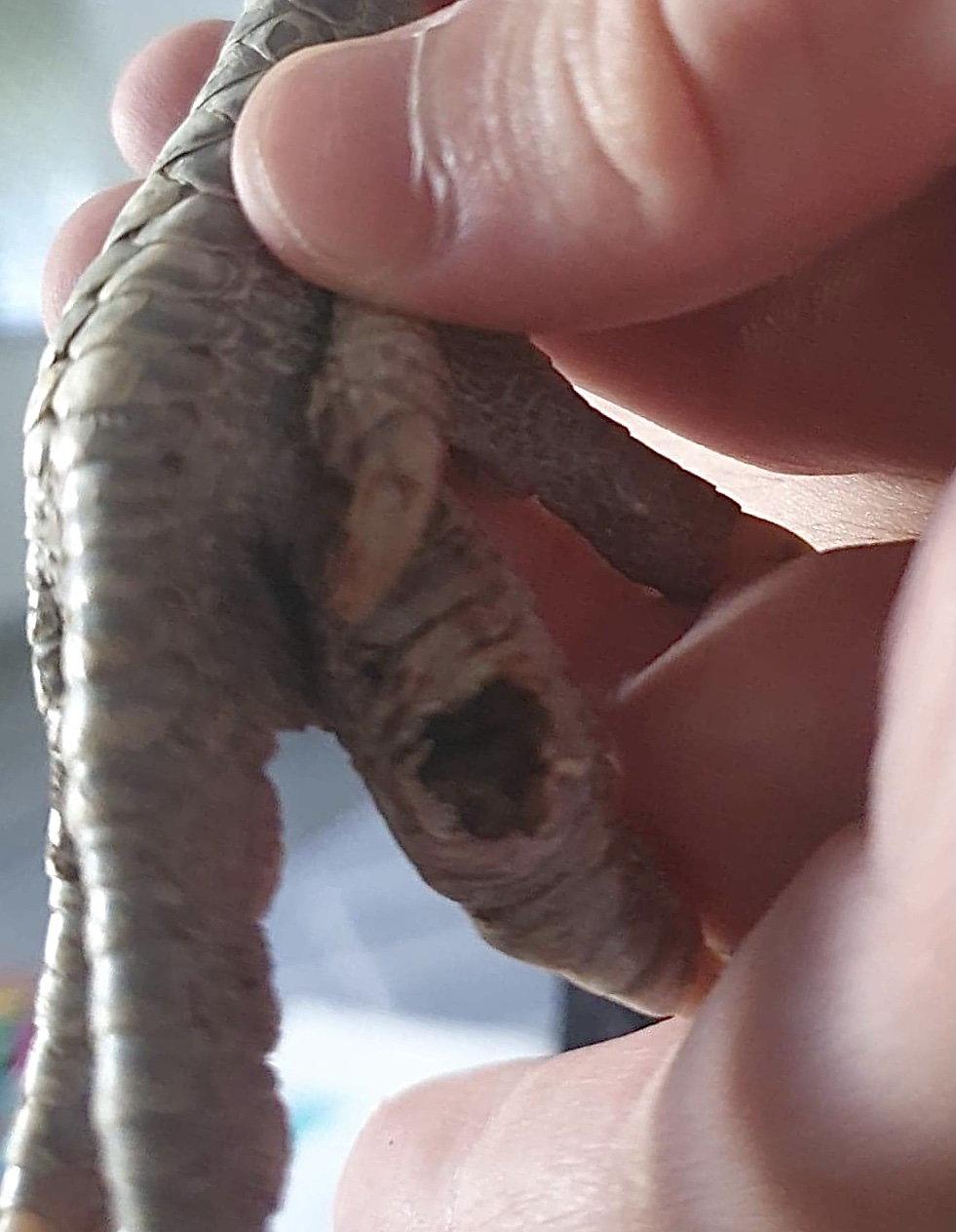 First off, welcome to BYC! Sorry you are having problems with you hen and sorry your hen has a bum toe.

It almost looks like the toe is being rubbed by the toenail on the toe beside it. And that is one deep hole.

Soaking in Epsom salt water (warm) then packing the wound with antibiotic salve then bandaging so it heals from the inside out is about all I can recommend.

But I'm going to tag @casportpony and @wyorprock for advice as to what to do and about the ongoing problem with the toe.

Hope you get it healed up. I hate it when one of my birds has a health problem I can't solve.
F

microchick said:
It almost looks like the toe is being rubbed by the toenail on the toe beside it. And that is one deep hole.
Click to expand...

Yea she has that extra toe that unfortunately grew in the wrong spot, when she’s standing and walking the nail is constantly rubbing against the toe underneath, and even though the outside of the wound has healed, she is now limping a fair amount again lately which she stopped doing for awhile.

You can soak, saturate a small piece of gauze with antibiotic salve, pack the gauze in the wound and then bandage with vet wrap. Change the dressing daily, removing the old gauze and replacing it.

IMHO, ultimately something is going to have to be done to stop the irritation. Poor baby. That has got to hurt.
F

Unfortunately we don’t have anything to dress it with other than your everyday bandaid and I’m unaware of if we have antibiotic salve or not, I’ll have to check.

Make sure it doesn't have pain killer in it. That is contraindicated with chickens.

Soak the foot in warm Epsom salt water. Chickens believe it or not love it. The longer the better. Clean with betadine if you have it. You can use peroxide cut 50/50 with water but it can be harsh on injured tissue if you over use it.

You want the wound to heal from the inside out. That is why I suggest you pack it with a small piece of gauze. If you don't have gauze you can pack the wound with antibiotic ointment and then wrap it with vet wrap. Vet wrap is also known as Coban and you can get a roll of generic at dollar general reasonably price. It's good to keep a roll on hand if you have chickens because there will always be the inevitable bumble foot you will have to deal with.

Cut a strip about 3/4s of an inch wide and a foot long. You will want to anchor it around the hen's ankle above her toes and then basically figure 8 loop it around the toe, covering the hole. You want it snug but not tight, Thick enough to keep friction from the toenail that is rubbing against it.

If you keep chickens you need to keep a first aid box on hand for using when they hurt themselves. Vet wrap, antibiotic ointment a small bottle of betadine and Epsom salts to start with. Some no stick gauze pads also.

Ah sorry, I forgot to reply, will try to get stuff to treat her ASAP, unfortunately found she opened the wound today when I went to feed everyone, I’ve put her back for now as we can’t do much to help her currently and its better not to stress her out too much before we can actually do anything. 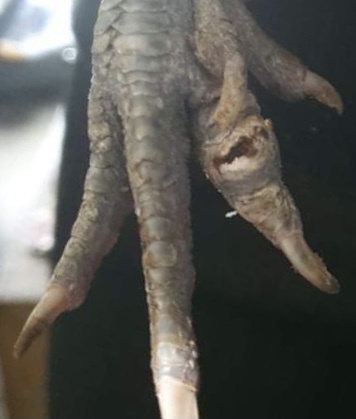 Didn’t seem to be bleeding when I found her, just looks like she took off some of the dead skin covering the initial hole but it’s still raw around it so hopefully she’s good till we get stuff, luckily nobody picks on her, more so she picks on them, so shouldn’t have any problems with that.
F

Because of the constant friction, I’m afraid amputation is the only option for that extra toe, my only issue is how to do it without hurting her, when looking for ways I only see people basically using knives, or bone cutting scissors and cauterising it.
While my idea was more of how you make a sheep’s tail fall off with a rubber band, possibly with a tourniquet further up to stop any possible bleeding, but I don’t quite know how that would work with a chooks toe to say the least, the only other option would perhaps be a vet but the prices are ridiculous to say the least.

We will be doing as microchick said to heal the wound and any help in solving the cause so the wound doesn’t pop up again is greatly appreciated.

Is vet care an option?
Having that "extra" toe removed would probably be the best solution.

You can try trimming that nail so it's not rubbing so much. With the toe having a cut/wound there, I would worry that it's going to get infected.
@microchick has given very good care instructions in the previous posts.

M
Swollen toe - not bumblefoot - what to do?

Not an emergency. Parrot beak and broken toe?

H
My Duck Has a Swollen neck