Need Some Advice on Broody Hens with Different Timed Eggs

So I want to preface by saying that I realise we've done this wrong and should have put all the eggs under the hens at the same time. Lesson learnt for next time.

We have 2 broody hens sitting on about 18 eggs. They kinda share the eggs, and if one sees an egg poking out from under the other hen she'll push it under herself. We tried separating them into separate nest boxes, but then we came back 2 hours later and they had both moved into the same box and abandoned the second set of eggs, so we just put all the eggs and both hens into the same box and they seem happy.

Yesterday we had the first set of 4 chicks hatch. Some of the other eggs should be hatching in the next day or two.
We've been offering the chicks water, but I read that they won't need food yet for another day, so haven't been trying to get them to eat. They seem more concerned with getting back under mum that they are drinking.

What do we do if one of these happens? Ideally one will raise the early chicks and the other the eggs, but we're not sure what will happen.
Do we take the chicks out and raise them under a lamp until the other eggs have hatched, and then reintroduce them?
Should we try splitting the 2 mums up again, and give one the early eggs/chicks and one the later eggs? How do we stop her from leaving the nest and going back in with the other hen?
We also have a 3rd broody in another pen that I could put the later eggs under. Should I try that and then move the chicks in with the older ones when they hatch? (the main pen isn't suitable for the chicks once they hatch, so we set up a separate daycare pen in the garage for the hatching nests which is where the 2 mums are)

p.s. If you remember my post from a while back with the stray rooster with the weird bone/feather thing sticking out of his neck? He's the daddy

Edit: Here are the mums: 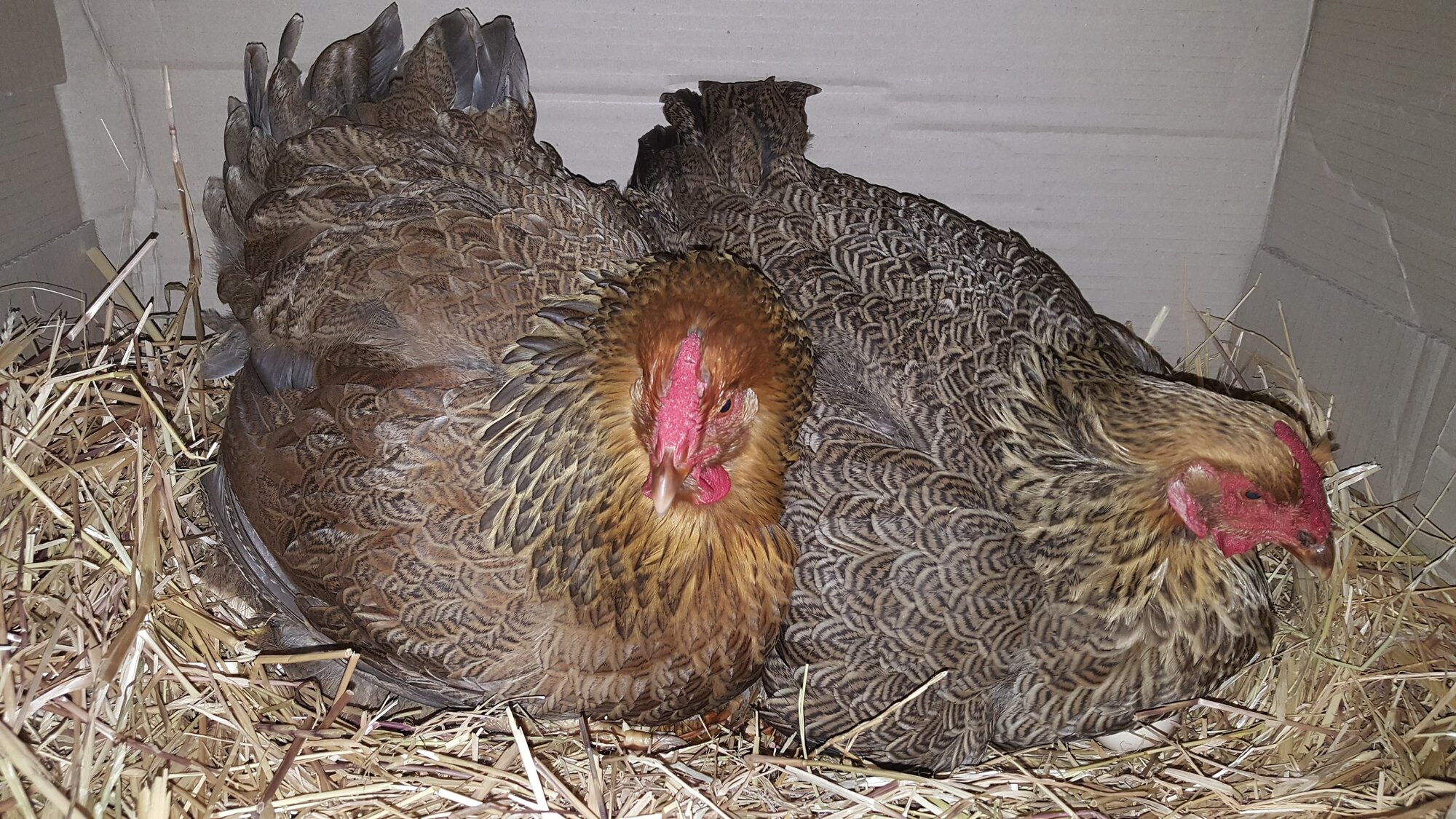 Take the chicks away from the hens and raise them in a brooder. If you do not do so it is likely that the hens will abandon the eggs within 36 hours of the chicks hatching. Do you have an incubator ?
C

sourland said:
Take the chicks away from the hens and raise them in a brooder. If you do not do so it is likely that the hens will abandon the eggs within 36 hours of the chicks hatching. Do you have an incubator ?
Click to expand...

We don't have an incubator, but we have heat lamps. We raised chicks under the lamp last year with no issues, so taking the chicks out and raising them that way isn't an issue. But we couldn't incubate the eggs that way.

If we do that, can we reintroduce them to the mums once the other eggs hatch? We wouldn't be able to raise the full 18 chicks inside, not enough space.

Your idea of removing one of the hens with the first lot of chicks to hatch might work, but she and the chicks would have to be set up out of sight or hearing of the other hen.
A

If u leave the first set of hatchees with one hen, then as sourland said, move the 2nd hen Completely away and out of sight and hearing of the 1st hen; let 2nd hen hatch the 2nd group of eggs, then give the remaining viable unhatched eggs to the 3rd broody, that Should work. I would move the 2nd hen in the dead of night to her new place, & watch her closely at daybreak to make sure she remains setting on the eggs. Situation is a bit complicated no matter what. But hopefully will it work. WAIT, i think this will work better. Move the FIRST hen with first hatchees to a place completely out of sight & hearing of a remaining hen. Let the second hen remain in place setting on the eggs. When 2nd hatch is complete, THEN give viable remaining eggs to your 3rd broody. I feel pretty good that should work! I didnt erase first part of this post cause i wanted u to know my thought process & how i arrived at second idea. (Because it is much more likely the 2nd hen will stay with the eggs if u Leave her where she has been setting. Meanwhile the first hen will have her chicks & wont try to return to eggs she can no longer see.)
A

Ps. I think my second scenario is actually what sourland meant anyway. U got this. Good luck with your 3 broodys and their chicks!
C

sourland said:
Your idea of removing one of the hens with the first lot of chicks to hatch might work, but she and the chicks would have to be set up out of sight or hearing of the other hen.
Click to expand...

Allsfairinloveandbugs said:
Ps. I think my second scenario is actually what sourland meant anyway. U got this. Good luck with your 3 broodys and their chicks!
Click to expand...

The issue is we don't really have anywhere to put the 1st hen and chicks where the 2nd hen couldn't hear them. We'd have to set up a separate pen for her, but the other hen would still hear the chicks.

Would we be better off just bringing the chicks inside and brooding them ourselves until the other eggs hatch? My only real concern is if we can reintroduce them to the mum later.
C

To make it a bit less confusing which hen I'm talking about I'll use their names. The 2 in the brooder box are Dolly and Queen Liz. The 3rd broody is Jane Fonda.

Would we be better off moving Liz with the remaining eggs and putting her back in the main pen until the eggs hatch, and as the next set of chicks hatch move Liz and the chicks into the brooder pen with Dolly? Then put the 3rd set of eggs with Fonda, and move the chicks in with Dolly and Liz when they hatch a few days later?

The nest boxes in the main pen are at least a foot off the ground, so the chicks can't stay in that pen because they can't get in and out of the nest.

And would the other hens in the main pen disturb Liz and the eggs? That's why we moved them to start with, because the other hens kept kicking them out of the nest to lay their eggs in there.

I'm kinda thinking the easiest thing to do would be bring the chicks inside temporarily until the others hatch, rather than playing musical nestbox

Ok, problem solved. Liz and the remaining eggs have taken up residence in our Laundry for the time being. This way she can't see or hear Dolly and the Chicks

Also, Dolly did a very wet broody poop. Is this normal? It stinks like broody poop, but I haven't seen one that watery before. 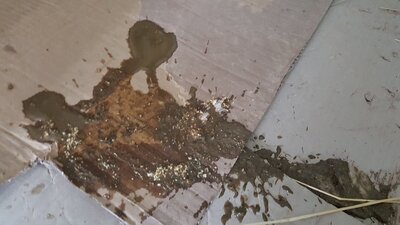 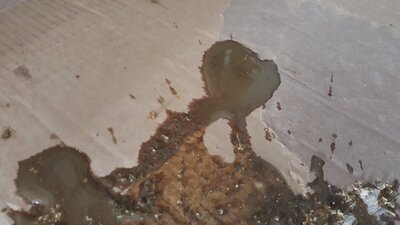