Hello, I'm a chicken owner who just adopted some ducklings for the first time. I was only going to adopt four, but there was a little one at the feed store who couldn't walk, and the owner was going to "throw him in the trash." So I of course adopted him.

He wasn't eating/drinking. I think he never had since hatch, since he can't walk. He didn't show any interest in the game chick starter, so I made him egg yolk mashed with water and dipped his beak in it, and also in water fortified with electrolytes. He sipped a bit of water and made a huge mess of the yolk mash trying to shake it off his beak, but ate some. We did that a few times. The next day he was super perky and ate regular game chick starter (moistened) and drank on his own. I noticed he was tossing the moistened chick starter around, so I fed him dry, and he seemed to like that better. So now he was eating and drinking normally, but wouldn't do so unless I held him up to his food/water. Also, he still couldn't walk.

I read that niacin could possibly help with the walking; I started putting it in his feed and water. I also give him "water therapy" twice/day (swimming in a lukewarm tub). It's two weeks later, and he still isn't walking, but he is trying to stand, and can move both legs well enough to scootch around in his pen and get to food and water on his own. His legs go out to the side and he slides himself along on his belly. He's not strong enough to get them underneath him. I still help him with eating a couple of times per day just to make sure he's getting enough food, but most of the time he can do it on his own.

So where I need advice is where to go from here. I had to separate him from his siblings because they were trampling him and far too rough. He needs a controlled environment in order to get to food/water on his own. He sits alone all day and stares at the walls. He seems to like soft fabrics and snuggles under them whenever he has one, so I keep old clothing in his pen. Other than that, he has no entertainment. Are there duck toys? LOL. Also, he loves to swim, but I don't know how he'd get in/out of the water if I left him with full access. He couldn't get up and down a ramp. He may always have to be supervised, but that seems a sucky choice as far as quality of life goes.

I was thinking of making him a wheelchair out of Lego, but Lego wouldn't float, I don't believe. Maybe that doesn't matter, since he floats. But I don't want anything that can drag him down, not to mention Lego is hard with sharp corners. Also, Lego wheels are tiny; bigger would be better, especially as he grows. Can anyone think of a waterproof, buoyant material I could use to fashion a duck wheelchair so he could get up/down a ramp to water on his own?

Thank you in advance for any/all advice. Fluffy McQuackers (son's name) thanks you, too! I tried to post a picture, but keep getting an error message, even though I lowered the size to almost nothing. Also, the regular picture icon doesn't work - had to use the "upload a file" button instead :/ This site is quirky since the changeover. Will try the picture in a reply.
Last edited: May 24, 2017 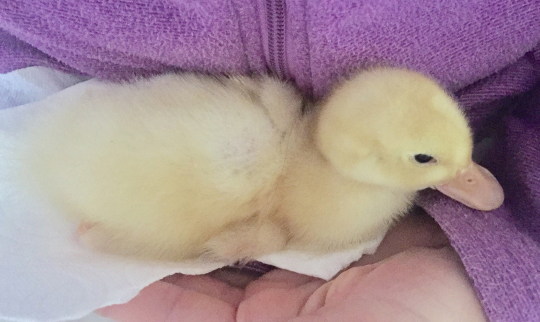 Sounds like splay leg. That can be treated. Check out the poultrypedia poultry podiatry page. Instructions for treating splaybleg are found there.

I would look into making something from a pool noodle, and remember never to keave him unsupervised, as with any duckling in water.

Look into the story of Bentley, the duckling, for some ideas on nutritional therapy.

You should be able to find that story in the archives.

A
I think my duck has a leg injury, please help
2