New feed store ducklings, anyone know what they are? (besides cute)

I got these two at the feed store. The one with the smoother head is very small, either normal for its breed or a runt. They are both cuties. I got them to go with my lonely duck that lives with my chickens. (a boy and not even sure what he is, will take a pic and post him later) Any help would be great. Thanks. 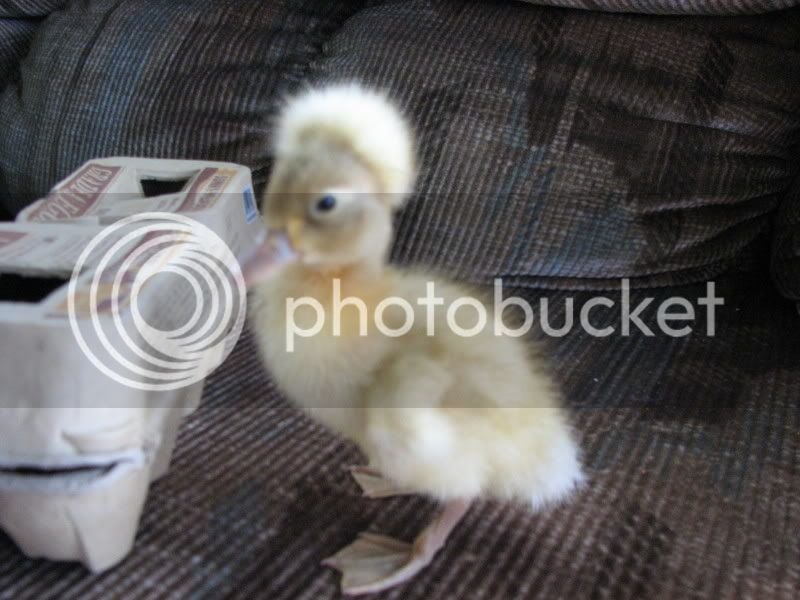 the top is a Runner.

bottom is Crested 'Something'!

maybe someone else will know that one.

they are so cute!!

I have one that looked just like the 2nd pic. He is now light brown/white with his crest. We call the little stinker, chocolate milk! I just love ducks. Just be careful if those are males, they will jump on your pullet/hens all the time!

The top one, just so everyone knows, doesnt actually stand upright like he is doing in the pic. He is just really small and trying to balance in that one, doesnt walk upright like I have seen runners do. I was wirried whan I took the pics that everyone would think it was a natural pose, but he was scared and I barely got this pic of him being somewhat still.

Not saying he isnt a runner, but he doesnt carry himself/herself like one.

I have a small male duck in with my chickens, he never mounts them or bothers them, just uses the ladies for body heat at night. Piles right in with them. However, my old muscovy would mount anything that was still long enough. Cats, stray dogs, chickens, rocks, anything.
Last edited: Mar 13, 2009

Does anyone know what kinda chicks I’ve got and what sex they may be?

Does anyone know what kinda chicks I’ve got and what sex they may be?

I feel like this is NOT what was labeled at the farm store.
2 3 4

H
Curious if anyone knows what breed this lil one could possibly be?