Hi, am new here. Today we bought first three quails. We've never seen quails before in our life. I've been lurking here for a couple of weeks... so I think we bought pretty healthy birds. We forgot to ask what kind of quail they were and how old... I am guessing they are older than 3 weeks...
I've read this forum and done google search, so I think I know what breed they are. Could you tell me what I have?

1) I think this one is Female, Japanese (Coturnix) Quail ?? 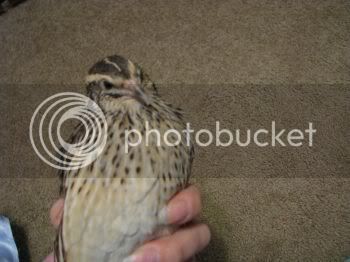 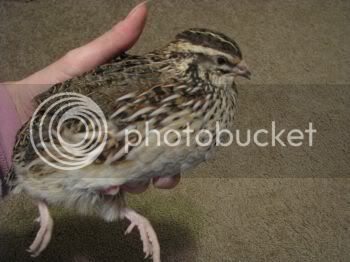 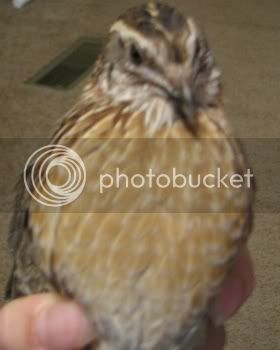 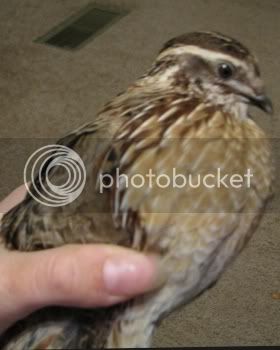 3) Is this a Red Tibetan Coturnix (aka British Range)?? I haven' been able to tell the gender. it is slightly smaller than the other 2 birds. 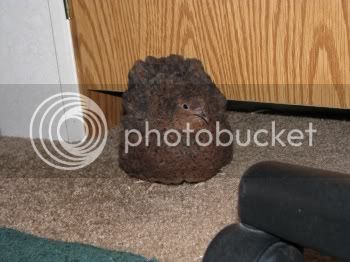 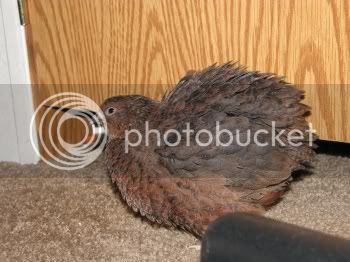 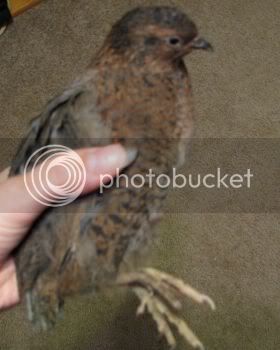 I want to keep them as pets & for eggs. We plan on getting several more next week.

#3 tibetan --- not a color sexable bird--- vent sex or watch for crowing or egg production. If it helps the males are usually on top and the females( or a lower ranked male having a really bad day...) are usually on the bottom.

Thank you so much for answers!!!!
and two more questions pls.

The second cage was a rabbit cage and we are going to fix it and add roof to it and possibly make windproof sides. it is 49"*36"*36" (or 125 cm*92cm*92cm)
They will have a lot of room to run around. I read that it's bad when the cage is too high but maybe I could make the top part soft. We want to buy another 3 or maybe even 6 quails.

Yep, the browns are most likely bigger because they appear to be jumbos (unless you have really tiny hands!). Considering that they seem to have all their head feathers, I would say they are at least 8 weeks old. The browns are right on the sexes, female first and male second. JJ is right that you can't tell the sex of the tibetan by the color, but judging by the shape, I'd guess you've got another girl. Males are usually smaller than females, and females are normally more 'round' than males are. But it's hard to say without another similar bird to compare to. Sxing is easy, once they start breeding. The males have a very distinguishable call for one, and they also have a gland right in front of the underside of their tail that gets swollen. Since you have another male for sure (the brown) turn him over periodically to see if you can see this gland. If you press on it lightly a white foamy substance will come out. This is not sperm. Once you know what you're looking for by looking at the brown, you can check the tibetan for the same thing.

Coturnix don't 'flush' much at all after their baby stage, so don't worry about the height. They don't need much height since they are ground dwellers, but it's not 'bad' for them to have it. They need 1 sq. ft., more or less, of space per bird.

16% protein is very low, you won't get many eggs in my experience with that. Did you go to a feed store? If so, ask if they carry (or can order) game bird starter. Typically it is 24%-28% protein, you will get a much better response with that. You can eat the eggs with medicated feed such as this, it won't hurt you. I've tried keeping my adult birds on 20% protein feed, and the laying was hit-and-miss. Once I put them on the 28% starter, they layed an egg per hen per day, for the most part, for the entire summer. Very few of them even took a day off during the peak of the season.

ETA: In the meantime, you can get some good quality dry cat food and mix with the 16% layer. Just grind it up in your food processor or some such. If you do manage to get the gamebird starter, you will need to offer them oyster shells in a seperate dish. And remember, if you keep them all together, you'll want no less than 5 females per male.
Last edited: Feb 28, 2010

Quote:
I have to disagree on what happens in the mean time. What ever low protein feed you are feeding is fine for the moment. Just feed that until you can secure a proper game bird starter. I use PMGBS 30%. Don't worry about grinding cat food, boiled eggs or what ever concoction you want to mix up in your basement. Focus your attention on securing proper game bird rations. http://www.purinamills.com/OurProducts.aspx?product=gamebird It's the first choice
Coturnix are lovers of perpetual sameness, so when you switch them from low protein feed to higher more balanced feed, you will get egg loss. It will be the same the other way around backwards.
One should conduct feed experiments on species other than coturnix. Just MHO

WELCOME TO THE ADDICTION!!!!

What to feed quails of mixed ages, sexes and laying? Tractor Supply ed.
2