New to chickens, lots of questions! 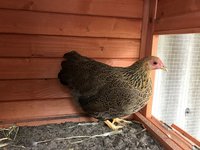 Hi everyone!
I am brand new here, and new to chicken raising, having only just acquired 3 beautiful bantam partridge wyandottes last month. I am located in Perth, Australia, and I have already got questions that I'm hoping I can get some help with here. I bought my chooks from a breeder and given the age he gave me, I'm guessing they hatched early December 2016, making them approx 24 weeks now. They were raised on crumble (the breeder had hundreds of birds so I'm guessing too many for scraps, and I'm fairly certain they had always been cooped). They aren't laying yet, but their combs have turned from light pink to a darkish pink and appear to be getting larger. I've managed to tame them somewhat with mealworms, and they are now free ranging.

Question 1: from what I've read, wyandottes start laying around 6 months old (give or take a few weeks) however we're coming into winter here. Will that affect when they start laying? Do bantams lay earlier/later than regular sized hens?

Question 2: my chooks won't eat scraps!! Does anyone have any suggestions? I figure they don't recognize fresh foods as food, I've tried greens, corn, watermelon, porridge, etc and they just aren't interested at all. I've tried scattering a little crumble/seeds over the fresh food but they just go around it. I've withheld the seed for a day or so but I'm worried they will starve. My next step would be 'borrowing' a friends chickens to teach them how to eat scraps but I'd love some suggestions!

Question 3: at 24 weeks, they still aren't perching. Is this normal at this age? They all just huddle in the nest box. The coop we have is a standard store bought one but I have a feeling the perches aren't high enough. We've tried poking them onto the perches but they are still a bit timid and usually just jump off again pretty quick.

So, I feel like we have defective chickens! No eggs, won't eat scraps, just so far costing us lots of money (meal worms aren't cheap!) Would love any advice.

The attached picture is from the day we bought them home, about 4.5 months old.

My responses to your questions:

1. they will lay when they are good and ready. Every bird is different, so i try not to get het up about when they should or shouldn't lay (easier said, than done

). When they begin to submissively squat in front of you and begin checking out the nesting boxes, you can be sure eggs are not too far in the future.

2. can't help with that one, I'm afraid. I don't feed scraps to my flock - they free range, so they do not seem interested

3. I'd say you are correct - your roosts are too low, in comparison to the nests. Block off the nests during the nighttime, but open them during the day, as your girls will want to check out the nest boxes before they begin to lay.

Millet is much cheaper than mealworms -my girls still go crazy for it.

1. They will lay when they are ready. Better quality birds tend to take a little longer.

2. Scraps are treats, and treats should be given sparingly. Feed is formulated for optimum nutrition. Never withhold feed from developing birds to force them into eating treats.

3. Yes, you might want to raise your roosts a little.

4. IF you insist on giving treats, try a little scrambled egg with the shell crumbled up in it, once or twice a week. They may not be interested at first, but don't give up. They will eventually give it a go, and like it.
W

Hi guys,
Thank you both so much for your responses.
It's so hard not to be impatient about the eggs but I'll try!

That makes a lot of sense about the feed. I will make sure they have plenty of the proper seeds/pellets and just keep giving them a range of treats and see how we go. My sisters chickens go nuts for scraps so I guess I just thought mine would be the same, but oh well!

Will start the engineering of the new roosts tomorrow and block off the nest boxes at night.

Egg with hole in shell and tail

I wonder how chickens used to lay eggs fine without a healthy diet..?
2 3