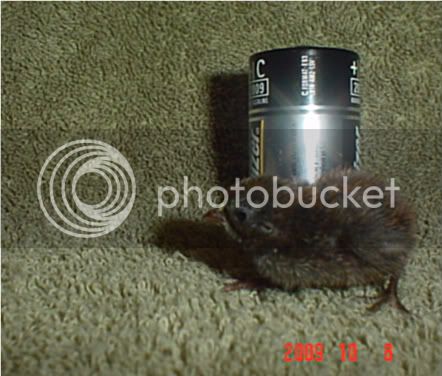 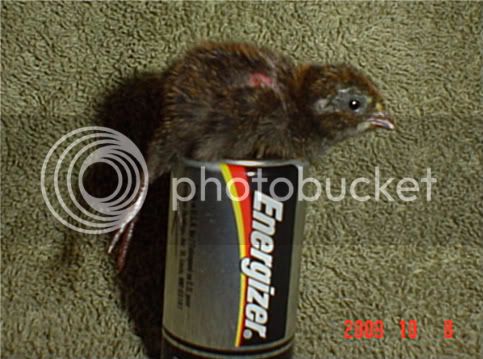 (I tried to get him to stand on the battery, but he was having no part of it)

I've only hatched what I call 'regular colored' and silver / white Buttons before.
Any clue what he'll look like as an adult?

other than that, i have no idea... I'm waiting anxiously for my babies to hatch (any day now!!)

P.s... did he get picked on? in the second picture he's got a little wound?

I think that's just patchy down and not a wound...my coturnix chicks had bald spots under their wings on their backs. Pretty sure that's normal.

He's very cute! I'm getting my first button eggs this coming week so I can't help with the colour, but he is adorable!

He's a blue face. Did you hatch him from your own quail? If so you have some other blue faces in there cause it's a dominant trait. If you have silver looking quail you might notice a few look a bit darker and without barring in the feathers. Those would be slates or silvers with the blue face gene. Crossing them with a darker color like the regular wild color quail or red breasted can get you a solid chocolate brown to black colored button quail.

Thanks! I didn't notice he has a 'blue face'.
It must be coming from the Button cock from Kelly's (KellyHM) eggs, because I never saw blue face here before.
I had gotten out of Buttons (stray dogs turned loose / killed 40+ I had outside) and wasn't planning on hatching / raising more, and was down to one old Button hen.
Kelly sent me some Button eggs back around Christmas-ish last year and I hatched 2 boys. My one Button hen hadn't laid in ages (not an egg I recall since the boys hatched) but started again, so I HAD to try the eggs. It's as if she is giving it one last try to repopulate the B'Quail here. She laid 3 eggs and quit (all were fertile and hatched), then laid 5 (all were fertile and hatched) and quit, then laid 9 as of today (I set 8 yesterday).
Looking at the first 3 youngsters from the pairing, I think one may be a blue-faced girl. She was not dark-downed or dark-legged like the one that just hatched, though.
I still haven't heard from Kelly to know if she had these in her Button gene pool, but that where it has to be coming from.
There's always something fun and new (at least to me).

Hi! Which of those colors hatch with almost black down/orange stripes like my new chick? I'm curious to know what color he'll be.
edit: And do dark legs and beak come with the package?
Thanks!

Lone female button quail - can I make her happy by herself?