New to the world of chickens!

Hi - I am from Cape Town South Africa - we have had our four (hopefully) hens for just over a week. I am a little worried that one may be a rooster, but as they are only around 2-3 months old I am having difficulty in sexing them. Also not sure of the breed - I think the two grey ones are silkie/Potch Koekoek crosses, and the smaller white one is a white leghorn/silkie cross - I think! The largest one - the possible rooster - appears to be along the lines of a white leghorn. Could anyone help with me with figuring this out?

Not the greatest pic - but trying not to disturb them too much at this stage. 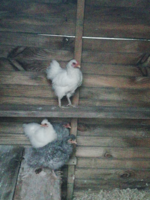 Hi Leisl and welcome to BYC. I'd suggest posting pics of individual birds on this forum - https://www.backyardchickens.com/forums/what-breed-or-gender-is-this.15/
L

This is a great place to learn and meet great people.
L

This is a great place to learn and meet great people.
Click to expand...

Welcome to BYC! I hope you enjoy the site.
If you post some clearer pictures (on the Breed or Gender forum) you should get some helpful opinions. Best of luck with your (hopefully) pullets!

so glad you have joined us.

Do post the question in the what gender/breed forum to get the best opines.

For each -- post each with it's own pic - for gender it's best to get several pics or at least a side view close up.