So we're coming up on one week with our poults. They have already gotten feathers. I emailed the hatchery and they said that the poults were 2 weeks on Thursday.

Some issues I have questions about:

Feathers/Flying:
Um...they are flying already?! Not out of the box (I am using an old microwave box, it's about 2.5 high, but a few birds are taking flight and whacking into the box occasionally. When they try to come straight up, they get a good 6-9 inches of air under them. Should I start thinking about clipping their wings? I saw hoe to do it in youtube and it looks fairly easy, We had caged birds as a kid and I know not to clip the 'blood' feathers.

Food:
The food. Ok, I got a big bag of "Nutrena NatureWise Game Bird Pellets". This is not the feed that the hatchery was giving them. They were not selling their feed, or I would have done that. The D and B Supply store said yeah, use that - no starter. But the poor things couldn't figure out how to eat the pellets. So I have been running the pellets through my blender to make a crumble. and now they are gobbling it down. Should I worry about this? Oh, and I have NO idea what the protein is on this stuff. Have looked online but no luck finding an actual protein count on the stuff.

Food and Water.
So I broke down and got the bottle/screw bottom thing for watering the poults but I have to change it constantly, with all the poop and pine chips these guys lob into it. Same thing with the food. I finally stuck some wood blocks under the food and water dishes to keep the pine out as much as possible, but it's kind of annoying how much they sully their water. m sure they will end up with the bird equivalent of rotovirus if I don't keep it clean. Any suggestions? The food dish is a shallow tin pan and i've stuck an empty bucket on that to keep the birds from strolling around in it. That's working alright so far, but I still feel the need to dump sullied feed and refresh the whole thing about ever couple days. (the other days I strain the feed to get the junk out and then add enough to top off.

Bully:
One of my birds (a Red Bourbon) is kind of a punk. he/she keeps nipping at the other poults to take the food out of their mouths. Is this normal poult behavior?

Sleep:
Is it normal for them to dog pile on each other and stick their beaks in the pine shavings? It's adorable, I guess i expected them to just stick their heads under their wings like regular birds.
They sleep and eat and poo and occasionally "whack" into the box, and I guess that's it for now?

Thanks for the insights.
For the record I have 8 poults.: 2 Narry, 2 Boubons 2 BBWs and 2 Bronze
This is our summer adventure.

Don't bother clipping wings, so long as the brooder is covered (we used hardware cloth and they were none the worse for wear) so they can't hit light, I'd not worry. Food: Augment the protein in the pellets with crushed hard boiled eggs, meal worms, moths, etc. (or just run down a bag of Purina Gamebird Starter). Water: Place brick that clears the bedding flush with interior wall of box/ place waterer on top of brick - wrap twisty tie around water reservoir and attach the tie to a small hook/screw on inside wall of brooder behind res. (keeps water clean/won't get dumped). Yes, they pile up/stretch out, etc. to sleep - if they aren't huddled in a single pile they're probably warm enough. Warm enough looks something like this: 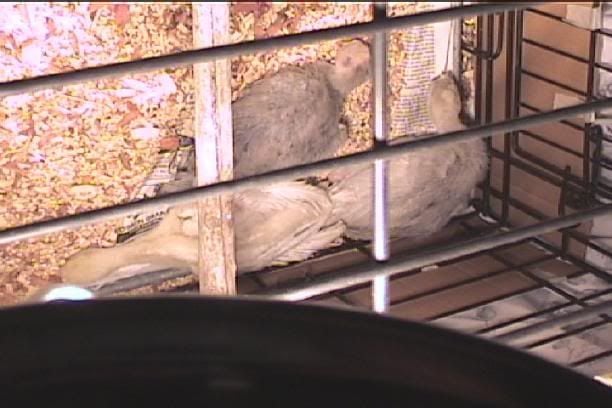 HELP! Turkey poults refuse to eat, can I force feed them?
2

How much feed to poults need
2