First, my cockerel (11 weeks); he seems moderately tired ( that’s laughable). When I put him in the playpen in the morning, he will run around. But far less than the rest of my small flock. He frequently stands looks around and then sinks to the floor/ground.

He pecks at stuff while sitting, and his poop picture it attached. He will breathe through his mouth when the other chickens are not.

Gave him some Vet Rx yesterday; seemed more animated today. Breed: Orpington. Also He has started “honking ”, or maybe I should say a stuttering honk.

I am also taking care of three older hands for a friend. I would say they are anywhere from 3 to 5 years old. I put a nesting box in there very large crate, and one of them is just acting weird. She spends all her time going into the nesting box. And now, just today, she has started to pick up the hundreds of feathers (one of them is molting) and is putting them on her back… Or perhaps trying to put them in the nest?

Thoughts? I’m not hysterical about all this, but I’m kind of suspicious something might be percolating. Or, it’s nothing. He’s tired because he’s growing

Also see second picture ... he’s down and no one else is. 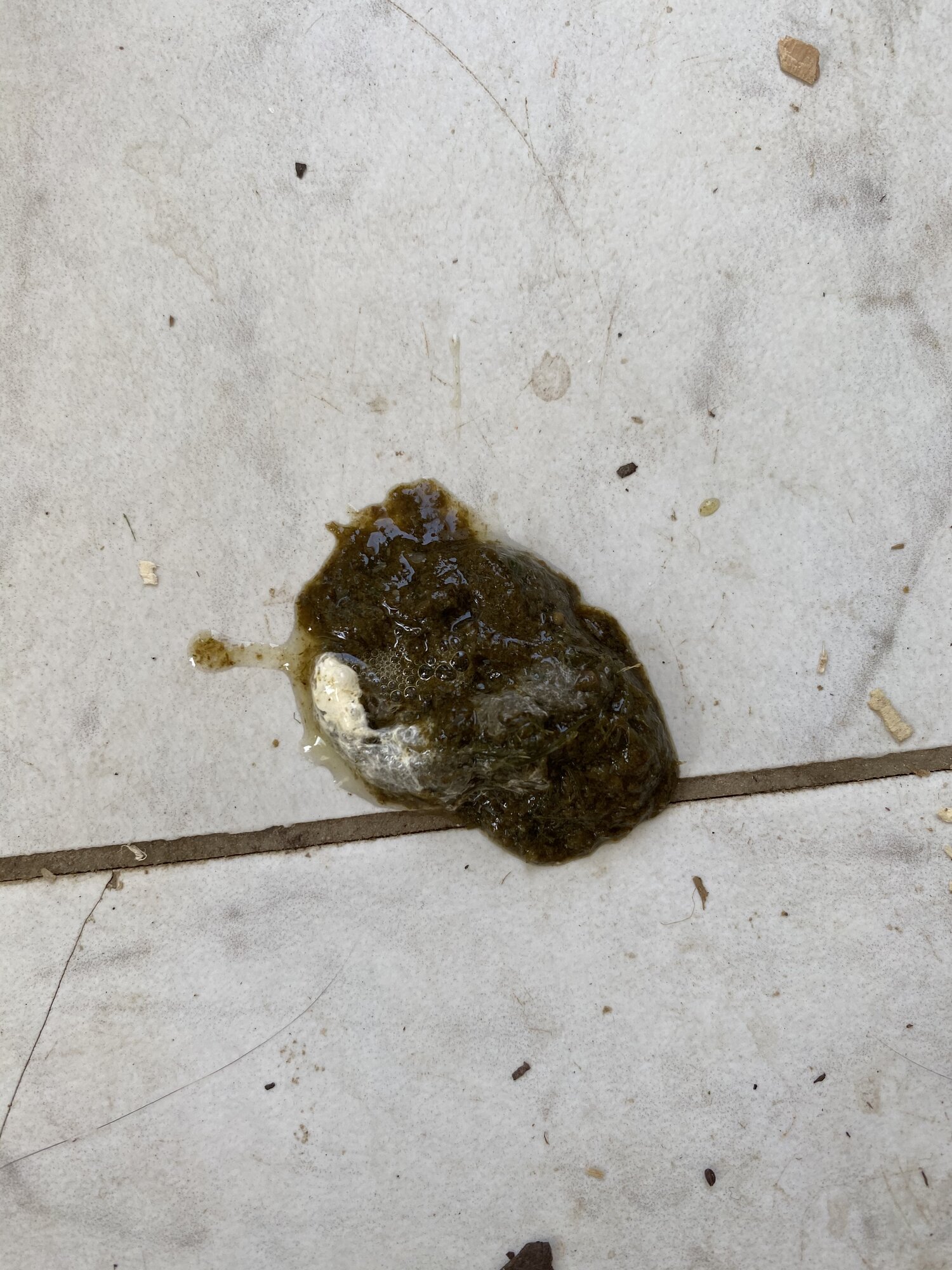 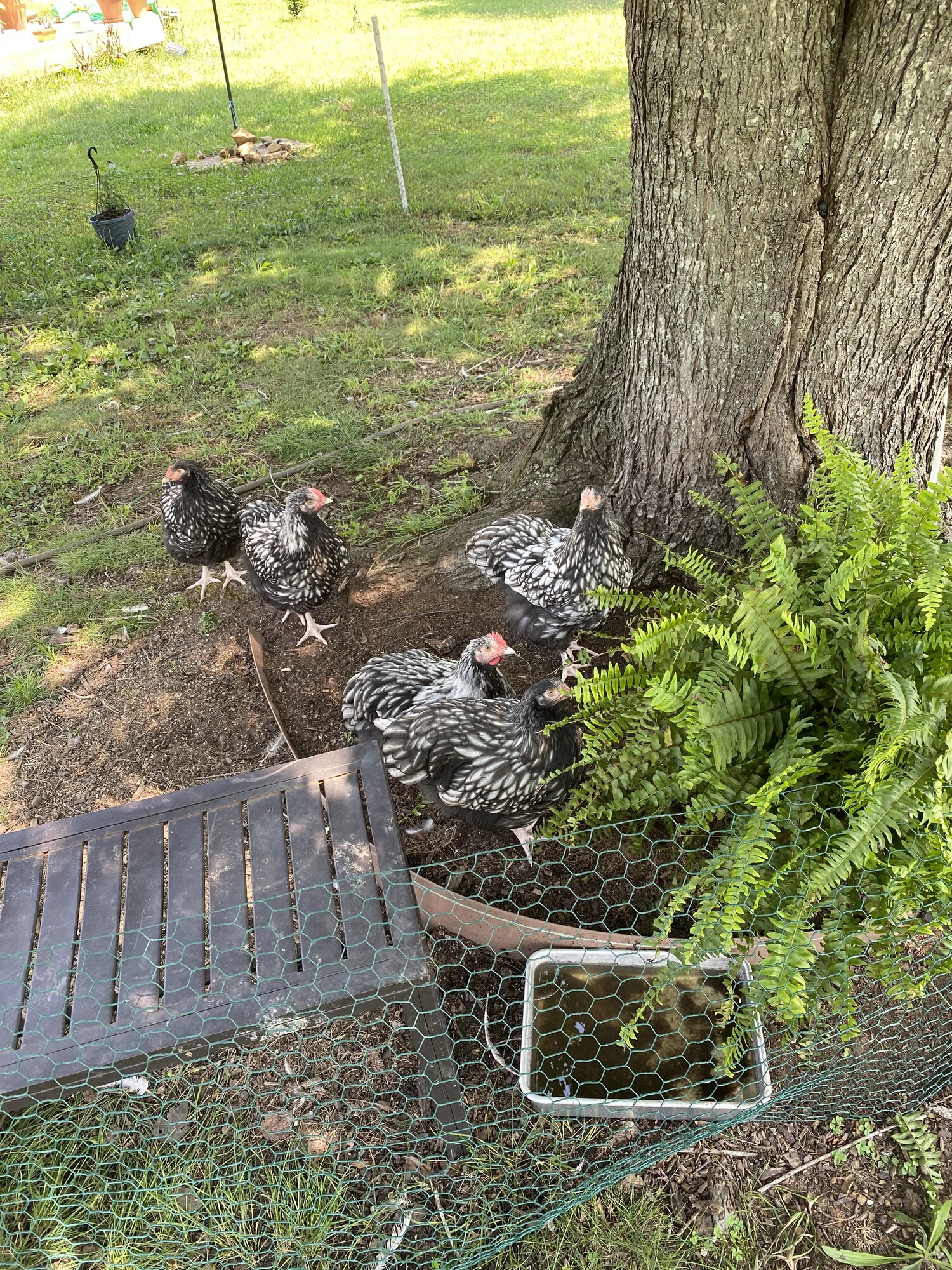 perhaps something in the water? It looks a bit green and algae-fied in the photo. You could try washing out the bowl thoroughly and refilling with fresh water.
As for the hen putting feathers on her back, some of mine do that with sawdust, and it appears to be quite a common behaviour, and nothing to worry about.

That is their water to walk through! LOL. This picture was taken at the end of the day. I put ice in it so when they walk through they can cool off... there is no algae in there, just green stuff they’ve dragged in.

Good to know about the hen, and thank you very very much!

Let's hope the 3 older visitors aren't carrying a latent disease that is affecting your cockerel.

Older visitors are segregated. Completely. But thanks for bringing that up, it’s critically important!

Check for mites or lice, at night, with a flashlight or head lamp. Easily acquired and need to be gone if found.
Have fecals checked, in case there's an issue now that they are all outside.
Orphingtons do tend to be quiet birds; is he just less busy? What other breeds are with him?
Are they all from the same source?
True isolation is really difficult at home! I too hope there's no problem with those visiting hens.
Mary

Folly's place said:
Check for mites or lice, at night, with a flashlight or head lamp. Easily acquired and need to be gone if found.
Click to expand...

OK. I have looked but not at night.

Breeds with him: Orpington only. Same clutch, same breeder.

One of my 8 wk olds had her mouth open and sat down often when all the other birds seem normal... She also wouldn't roost in the run when the other chicks were up on the beams and stayed on the ground. It got me a bit worried, but I left it alone since she otherwise seemed to be eating and running with the flock just fine. Today it cooled down quite a bit and she was back to normal. I'm guessing she was prone to heat...

Oldenburg Mom said:
That’s what I was thinking. I don’t blame him... I loathe summer.
Click to expand...

I see nothing particularly alarming about that poop.
Watery because they are drinking more water to cool off.
Might give some electrolytes.:
https://www.backyardchickens.com/articles/aarts-hot-weather-spiel.75893/


Oldenburg Mom said:
Older visitors are segregated. Completely. But thanks for bringing that up, it’s critically important!
Click to expand...