Apologies in advance for lots of reading, but this situation is rather strange and I'm new to this.

Okay, so long story kind-of short...My mother wants to raise chickens. She set up an incubator etc, and put in about 36 eggs, different breeds (I had no idea she was planning this so don't know where the eggs came from). We waited the 21 days, and one egg pipped. It was a long time, so we did assist a little bit and it was fine for a week but has since died - it's unrelated to this post, I just wanted to be thorough in giving info. It wasn't our fault, but there were measures we could have taken sooner to improve its chances. I loved it dearly (was such an energetic, cuddly little chick), but have since done a TON more research and that brings me here.

It's been about 10 days since the "hatch due date" and none of the other eggs have pipped or otherwise. I think one cheeped, and one moved, but still...No chicks. This is our first time doing this so we're not too surprised, just really disappointed (everyone starts somewhere right? And we learn the more we do it).

What I need help with is what do we do now - should we give up hope or what? I have done the float test, water same temperature as incubator, and most of them seemed viable (all info from this site so thank you everyone). Some even moved a bit. I'd done the candler test before the float one, and made lots of notes. All this was done today, carefully and mindful of temperatures (one egg did slip though and cracked the wrong egg - what should I do?)
From my research, it seems about 80% of the eggs could have a chance but it's 10 days over and to me that sounds...Not optimistic. Mum's so sad about it (thinking we've failed them somehow or super unlucky) so she's sort of left it to me. I made an educated guess and started assist-pipping 2 eggs with the most likely chances. But I saw no beak in either (one I plainly see a chicken in it, but the second membrane remains intact and can't see movement, but the candler test on this looked very promising. The second I couldn't see much of anything, too dark - but the first chick that hatched was black so...)
To be clear, I know what not to do for assisting in the sense of only creating a small hole and leaving the chick to do the rest, and so on. I only made a tiny hole where the beak was most likely to be, and tried to shine a light to see inside - no beaks. I'm also deaf, so while if I held a chick to my ear I'd hear it - I can't rely on this with an egg so if there's sound I'm not sure I'd know.

Either way, no beaks. 10 days over. No clue what the heck we're supposed to do now. They've stayed in the incubators, mostly undisturbed. My mother was very dedicated to keeping it all working and comfortable for them. We did still turn them for a while though (stopped about hatch day) - I now know not to do that after 18 days. So yeah, we're really new to this and I feel terrible for some of the mistakes we've made along the way but please don't judge us for them. We're absolutely going to do this again no matter what happens to this first lot, and we've learned a lot already.
But I'm so lost and confused about what to do now, just...Can someone please help me?

If the chick in the egg you opened was alive, you'd be able to see it moving under the membrane even if it wasn't internally pipped.

If you want to be sure, you can open the eggs over the air cells. If the chicks are alive, this won't hurt anything.

In the meantime, can you also tell us whether the incubator was a still air or a forced air, what temperature you were incubating at, and what your humidity was during the first 18 and last three days? That way we can help you troubleshoot and hopefully be more successful with your next hatch.

Thanks for the reply.

I was worried that would be the outcome. I got really stressed not seeing the beak, worrying I was going to harm any of them by opening it wider. But 10 days over...I think I will open the air cell areas and have a look later.

As for the info, thanks again. So I don't really know much as mother set it all up. I've included pictures of the incubator opened for the photos. The temperature displayed isn't accurate (as it was open) but I checked it now and if that is Fahrenheit then it's about 100 I think? There's water in the bottom, and the red light comes on now and again - and when opened. Aside from that, I don't know more until mother gets home and I can ask her (she's often away in weekends). Maybe you can make more sense of it than me?

The marks are so we know which side is which and don't miss any eggs when we turn them over. Next time I will be numbering them all and candling them before incubating and thus keeping a better record of it all. 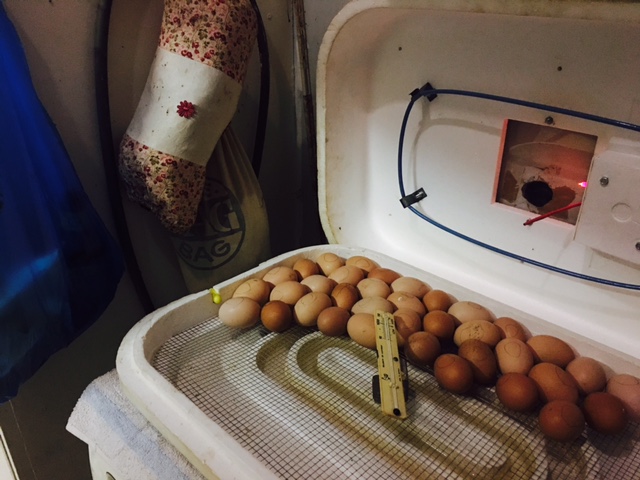 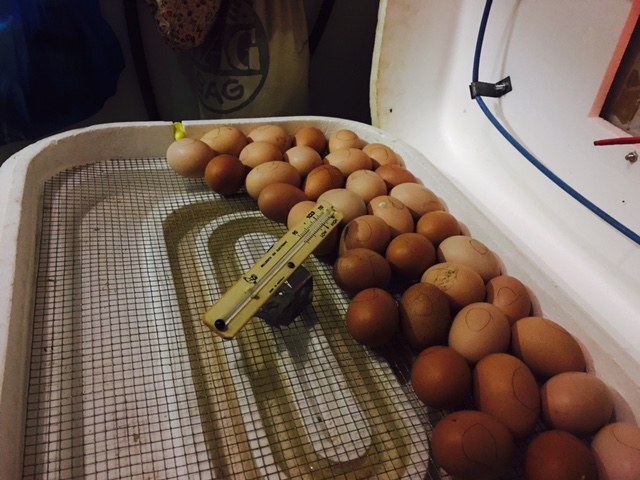 This was placed on a washing machine in our unused open laundry area (as said washing machine went on strike years ago) which is a tiny room without a door to the kitchen. So they're extremely safe and undisturbed. If it means anything, it's winter here in Australia and at about a week before hatch day it was really freaking cold here, but has since been more normal.
I've no idea how to check humidity. For the 21 days my job was just to turn the eggs at night on the weekends mother wasn't home. After hatch day is when I was more involved - but tell me how to figure this stuff out and I'll let you know. I'm very eager to learn.

Humidity is extremely important. If that wasn't measured then that's likely what caused the chicks to die. Late deaths in incubation are very commonly caused by incorrect humidity during incubation.

Help! Hatching/pipping egg with no incubator - how can I jury rig one?
2