Paralyzed leg - is it Marek's?

For the past couple weeks my chicken, Red, has been limping. At first I thought she had leg mites (we had a case of it a few months ago but seemed to have successfully treated it). Her feet had begun turning white and her scales were strange. I had a friend who knows more than me about chickens come by and my friend thought she saw a cut on the bottom of the chicken's foot. I have been unable to find the cut, but I've restarted the mite treatment and also sprayed her with blue-kote. The whiteness on her feet has disappeared and her scales have not worsened. I should also mention our other chicken, with whom Red is in close contact, is showing so symptoms of anything at all.

In the intervening time she's been using less and less of her leg, until today it seems like she has no use of the muscles all the way up to her hip. She just limps along on the knee and when I touch an ice cube to her foot, I get no reaction. When I try to manipulate the foot and leg, there is no muscular reaction, though there still seems to be some muscle tone.

Red doesn't seem to be eating much and hasn't laid in three days.

Has anyone encountered this before? Is my chicken doomed?

As a follow up, we have considered Merak's disease but her eyes do not seem to show any sign or discoloration or distortion. Red is also a bit old as she is about 18 months-2 years old (we were given our chickens as a gift, so not sure) and her other leg and wings are completely unaffected.
Last edited: Sep 14, 2014

I don't have much time to reply right now, but this should get you started until I can get back and write a proper reply:

Make sure to carefully read the "SYMPTOMS AND DISEASE DETAILS" section as it goes over the Marek's symptoms as well as other ailments that look similar and can cause the symptoms you are seeing. Please note that birds with Marek's rarely show all of the symptoms, and may only show one symptom. Most Marek's birds that suffer paralysis do not necessarily have abnormal eyes.

Thanks - the more we look the more she seems to have Marek's. There are some other symptoms she was having in her eggs beforehand as well, so I'm going to just throw it all up here and see what people say. Here is what Red and her eggs were displaying in the weeks leading up to this:

-June: Loss of scales on feet (we thought scaly mites and treated as such. She improved and our other chicken, Bertha, who was starting to have a couple raised scales now has completely healthy feet). Since the paralysis has begun, her scales have begun falling off.

-July: All seemed well, chickens are happy and healthy. We built them a new, improved coop.

-August: The next symptom I noticed were irregular egg shells. The pointed end of the shell seemed wavy, like a ripple in a pond, but obviously in the shell. She also laid a single egg without a shell.

-September 1 or 2: Limping on right foot begins. Both feet are covered white and crusty with raised scales. Assuming that she had mites again, I give her a foot bath and coat with canola oil. A couple of days later the whiteness and crustiness has receded. A friend stops by to help examine, says that she think she sees an injury on her limping foot so she is cleaned and treated with blu-kote. She reacts to being touched and has some resistance when handled. Foot is curled. She hobbles along fine. Still lays eggs. I notice briefly that she tends to close her right eye when resting but snaps open when being handled.

-September 5- Her right foot is stretched out and doesn't react to touch. Blu-kote has dried out the foot and it's cracked in parts and bleeding. I soak her and coat with Canola oil. An egg with a mottled yolk is laid. She continues laying about every other day. She can't get up to her roost though so she lays eggs on the ground. She is breathing through her mouth heavily but we attribute that to the heat.

-Sept 20: Right Foot and leg are paralyzed completely up to her hip, she is losing weight, occasionally closing her right eye, and seems to have no appetite, though her crop does not feel backed up. Heavy mouth breathing continues, days are in the 90s. We isolate her and begin feeding her lots of greens and tomatoes to up her vitamin intake. Limp comb.

-Today: Still no laying, she has either lost or plucked the belly feathers, still paralyzed in her right leg, which has also lost a significant amount of muscle mass. She has green feces (brooding?) She is breathing heavily through her mouth (days in the 90s) and occasionally closes her right eye, cannot tell why. No swelling or injuries or other signs of bumblefoot. We have been giving her aspirin. Her appetite seems back to normal. The right leg doesn't seem to have the strength it once did but still reacts to touch and has resistance when handled.

*Other information: Our other chicken, Bertha, is completely healthy, and the flock we got the chickens from in June has no history of Marek's disease, though I read it could have come over on the wind from a neighboring flock (the nearest flock is 3 houses away, about 100 yards through fencing and houses).

Here's a video of Red trying to stand up. 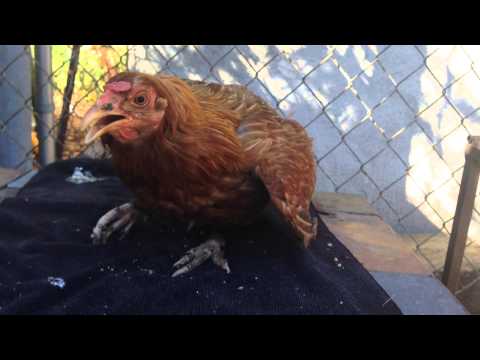 Any Feedback would be great! Poor thing. My chicken went lame on her right side last night. I too don't know what to do. She's about the same age as yours and don't think she was vaccinated against Marek's disease. My question is, can they live with it, or is euthanization necessary. My girl is alert, eating, drinking...but paralyzed. Since it just happened yesterday I haven't seen her poo. By the way, I'm only guessing, but her foot looks as if it's necrosing

Okay, first off, I am not a vet or medical professional, nor an avian expert of any kind. From our experience and research, Marek's is basically a form of herpes that affects poultry (not communicable to humans) and "flares up" from time to time the way a cold sore does for humans. However, their sores occur on their intestines. It can often be fatal or paralyzing, but it is not uncommon for the chicken to survive the bout and come out the other side, never to be bothered again. Separate the affected bird from the flock, and make sure she is supported (as she won't be able to support herself) and given plenty of fresh water and food. You can also make sure she has plenty of electrolytes (I think the product is called "bird rescue" or something in that vein). Clean her separate box daily and keep an eye on her to see how she is faring. Our Red, sadly, did not survive, but I know that they can.

Hi there! Thanks for the response!

I took my "big red" to the Dr. today and she had hypocalcemia! It definitely mocks Marek's, except her poo wasn't green and I read elsewhere that Marek's is not sudden. I read all weekend thinking it could be numerous conditions, as they all symptom the same. She laid a funky egg on Saturday, then a soft one Sunday...that's when I knew it had to be some sort of deficiency and doctor confirmed it. She gave her a dose of calcium, some hcg(? Something like that, it temporarily halts egg production), a pain reliever and antibiotic for preventive measures. She's now standing using both feet! She's not 100%, but I'll take it! So if anyone reads this, I believe most sudden paralysis may NOT be Marek's, but a nutrient deficiency of some sort!