Concretely the two WE genes ... it's a superposition of genes?
Or are two WE genes not identical?
How to prove that there are 2 WE genes? ... by the genetic profile of the offspring?
1 WE gene it is few white eyes on the train ... 2 genes WE is a lot of white eyes ... it is a 'genetic' logic?
The effect 'eraser' of color at SP is White + 2 WE ... because White + Pied + 1 WE (Pied WE pattern) there is a lot of color!
The color silver comes from where? ditto with the Ara Parrot Silver Pied?

This is interesting. I'll be watching this...

Hope someone who knows views this thread.

"Pied" and "White" are two different mutations of the same gene. This means that a pea can have only a combination of any two -- "Pied", "White", or "Normal". Here's the convention for naming these possibilities:

1 "Normal" + 1 "Normal" = no mention of either White or Pied. Normal is assumed if no mutant version of the gene is named. Thus, we say India Blue rather than non-Purple, for example.

"White-Eye" is a mutation of a different gene. When a pea has one copy of this mutation, it should be called "Single-Factor White-Eyed" or something of that sort, to follow the convention found with other species having such incompletely dominant mutations. But since there isn't such a convention among peafowl, often you'll see both Single-Factor and Double-Factor simply called "White-Eyed". You can tell them apart by looking at the ocelli -- Single-Factors will have some white-eyes, while Double-Factors will have all or virtually all white-eyes.

The "Silver Pied" thing seems tricky, because it seems to be the result of this:

But some breeders say there's some additional mutation involved to give the "Silver" aspect, despite not being able to demonstrate it being an independent trait. In other words, they claim that it's possible for a peacock to be "Pied Double-Factor White-Eyed" and not have this mysterious "silver" trait. I've seen a few pics meant to demonstrate the difference, but what I've often found was that the peacock had some non-white ocelli in the train -- thus they weren't "Double-Factor White-Eyed". I think what also happens is that the Single-Factor White-Eyed birds might be mistaken for Double-Factor birds because there's so little color in the train. In other words, the "Pied" part of them already erased the feathers completely, so you can't tell if the ocelli would have been white-centered or not.

Any other combination of those mutations would be something else. So, no, there wouldn't be a "Dark Pied Silver Pied". I'm guessing you're thinking that would be this:

I'd call that "Dark Pied Double-Factor White-Eyed". It's a very clear and definite term. Unfortunately, because there is no convention on this with peafowl, breeders can call it whatever they think fits.

Over the years, when I've tried to encourage some kind of convention on this forum, I had people here arguing for different terms, and not always agreeing with what yet others said. It's a mystery to me -- in so many other species, there is a convention for what to call the same mutations and combinations, but there seems to be a tradition among poultry people to just come up with whatever name they want. There are chicken breeds with terms used to describe certain colors/patterns. The exact same color/pattern -- based on the same mutations -- could exist in another breed, but goes by a different name. Or, as in peafowl, someone combines two mutations and calls it a new name -- such as the now-retired "Oaten". It makes things confusing for people breeding their birds. There is no "Oaten" mutation, since it's the condition of being Cameo Blackshoulder. That was thankfully changed from the former to the latter, but I'm seeing "new" colors with "new" names which disguise how they are inherited.

I'm more familiar with "cage-birds", personally. Take cockatiels, for example. You could find a bird listed as being "Cinnamon Pearl Goldcheek split to Pied". This description tells the buyer exactly what (s)he's getting. If, instead, the cockatiel breeder offered the bird as "Spotted Citrus" or something similar, there would be no genetic information conveyed. If "Spotted Citrus" was, at least, a term accepted by convention and used by all breeders, perhaps the buyer could look up what mutations are responsible for the coloration. But if "Spotted Citrus" was the "new color for 2018", buyers would just have to guess.

Then there's also the convention of using the same names for mutations across species, especially in parrots. If the mutation is sex-linked and results in no melanin -- so the eyes are red, normally green feathers appear yellow, normally blue/gray/black feathers appear white, and toes are pink -- it is called Lutino. If the mutation is sex-linked and results in a reduction -- but not elimination -- of melanin, it's called Cinnamon. If the mutation is autosomal recessive (in other words, not sex-linked), results in elimination of melanin from the feathers but skin and eyes remain pigmented, it is called Yellow, or sometimes Dark-Eyed Yellow. This terminology is maintained across species -- so red-eyed yellow-feathered Budgerigars, Lovebirds, Ringneck Parakeets, Lineolated Parakeets, Amazon Parrots, Conures, etc. are all called Lutino -- because they all have the same mutation.

Similarly, if an autosomal recessive mutation results in the elimination of yellow/red pigment in feathers, the mutation is called Blue -- even if the bird doesn't have blue feathers. Sure, Blue Budgerigars are that color because their mutation erased the yellow from their green, leaving blue. But not all parrots are green. There are African Grey parrots which look "normal", except their tails are white instead of read. Their bodies are gray, but they're called Blue -- because it was the Blue mutation which prevented them from showing red in their tails. When the same mutation appeared in Scarlet Macaws, they were also called Blue -- despite the fact that they are white, with blue "trims", because the normal Scarlet macaw is mostly red. The Blue mutation blocks that color, leaving those feathers white.

Anyway, that's a bit off-topic, but I believe this is the reason confusion remains among peafowl people about genetics. Sure, many people figure out the "code" after a while, but will it work with "Mocha" and "Platinum" and "Steel" peafowl? Unless someone took you aside and whispered in your ear, you'd have no idea what they're made of.

I already answered this -- see below for quote from my response above.

Rosa moschata said:
So, no, there wouldn't be a "Dark Pied Silver Pied". I'm guessing you're thinking that would be this:

I'd call that "Dark Pied Double-Factor White-Eyed". It's a very clear and definite term. Unfortunately, because there is no convention on this with peafowl, breeders can call it whatever they think fits.
Click to expand...

Two gene White eyed ... OK if all the dark SP were like on these photos ... but it is very rare! 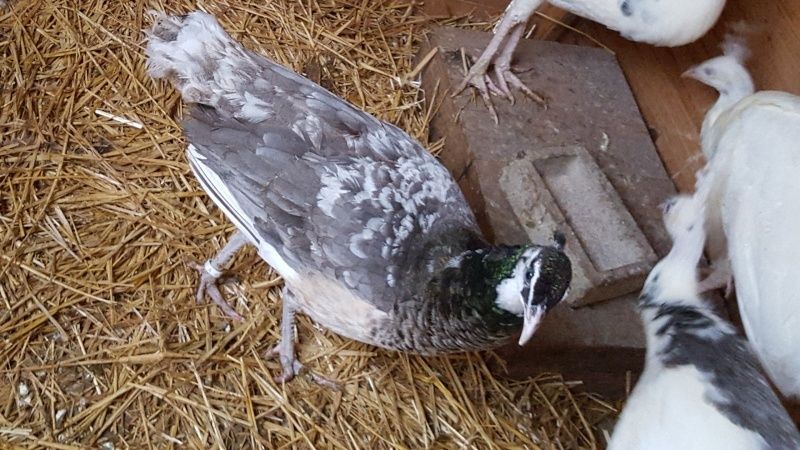 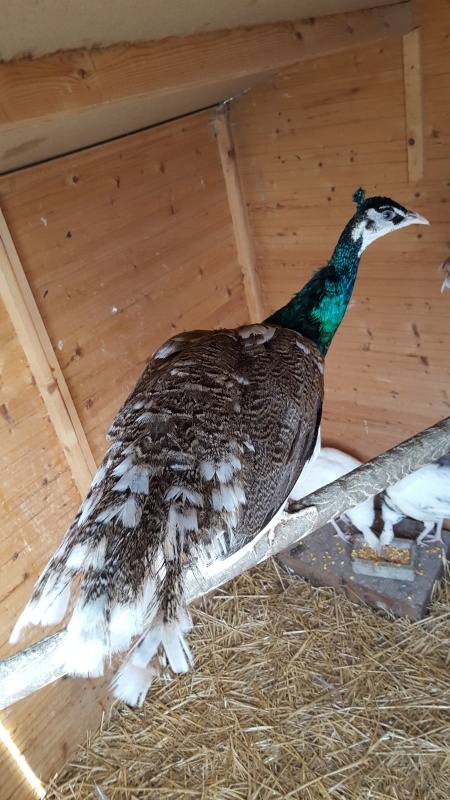 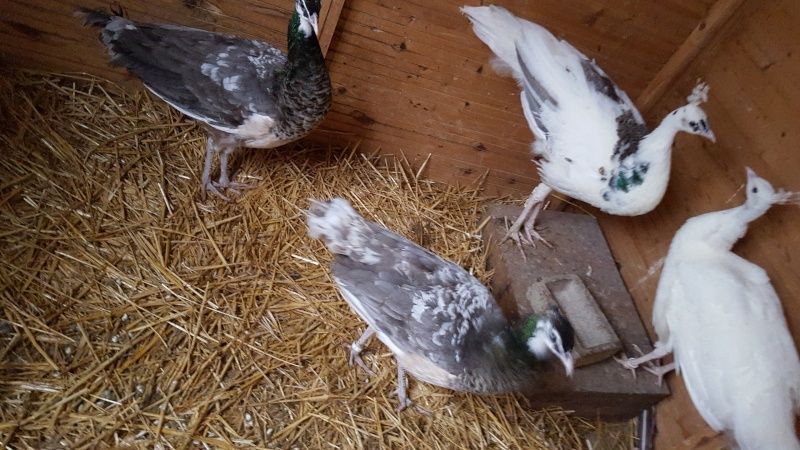 How can be explain that with a single silver pied bird the silver pied pattern can be created ? ... cross with pied birds ... for example .