I have at least two birds that their rumps have been pecked till bloody. They have plenty of room and feed. Suggestions and ideas are welcome.

I've heard you can put Blu-Kot (dunno if I'm spelling it right) on them and the other will stop pecking. Sure it isn't maybe mites?

Nahh they get dusted often - they are pecking :-S Blue dot?

Im not sure what its called might want to look on some other posts. I've seen it a lot, but not sure how it's spelled.

I've read where some have success with Blu-Kote, others say it didn't work worth a hoot.
I used pine tar. Messy, but works with one application.

I smear axle grease on the raw area. That's what my grandpa had once told me. It works, though the blue kot may work as good or better.
Last edited: Oct 16, 2008

I've never seen this, but am wondering too.

I have four chickens that are being picked on by more dominant birds. My EE had her back picked so badly that I had to keep her in the house until she healed. I made a cape for her to cover the area and she has been wearing it for a little over a month now. Her back is healed and feathers are starting to grow, but it's still bald enough to get the others picking again. I won't take the cape off until she is mostly feathered in. I bring her into the house once a week and take the cape off so that she can preen. She definitely did not pick herself, I saw her being mauled.

Second, I have four Derbyshire Redcaps and three of them have bloody feather stumps from their tail feathers being pulled and feathers missing from their saddle area like my EE. I made them smaller capes and they are healing nicely too. The redcaps come in the house once a week to air out too. When I take off the capes for the chickens that have totally healed, they will all get some kind of deterrent like pine tar or Stop Pick in that area to enforce that they will taste bad if messed with. The capes are easy to make and you can customize them to the size of your bird. There are some that you can buy and patterns that you can find by searching this site or on the inernet under 'chicken saddle'.

When the feathers are bloody, I try to extract the broken feather from the skin very swiftly with tweezers because sometimes the broken part of the feather just keeps bleeding. I will clean the area with a mild disinfectant and then dry the area thoroughly. Sometimes I will have to put styptic powder only on a spot that will not stop bleeding and remove any residual powder after the bleeding has stopped so that the bird will not ingest it.

Not a single one of my birds have or had any kind of a parasite, so I know that is not the picking problem and since I spend a lot of time with them, I have witnessed the vicious picking. If you don't get the picked and bloody parts covered up, the other birds will continue to pick never giving the injured chicken a chance to heal. These capes or saddle covers are good for hens being torn apart by roosters too. 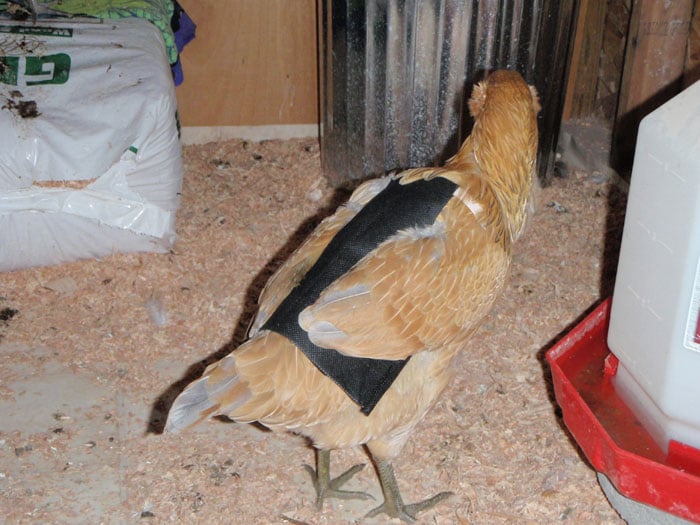 It was suggested to me to use Vicks Vap-o-rub on the raw spots and it definitely worked. Which is why my roo, Stumpy, shies away from me now - he remembers me catching him and rubbing Vicks all over his butt when the mean girls in the coop were pecking his tailfeathers out! It definitely stopped the pecking.

L
Not sure who the bully is - can it be the pecked hen herself?

Moving up in an already established pecking order?

C
HELP!!!! My chicken was pecking 2 others in the flock and there was a large bloody spot.