Curious as to what this pattern of color is called 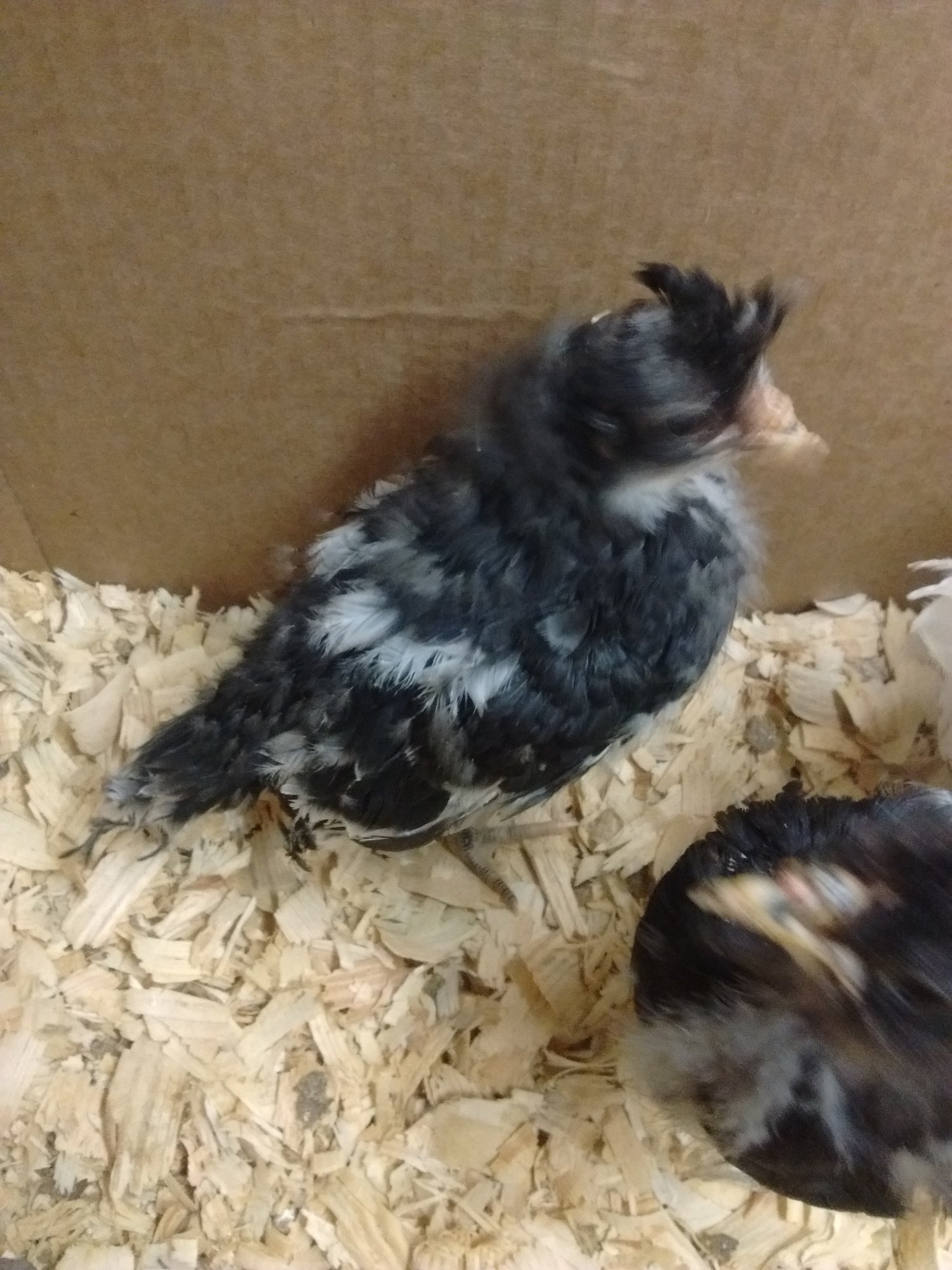 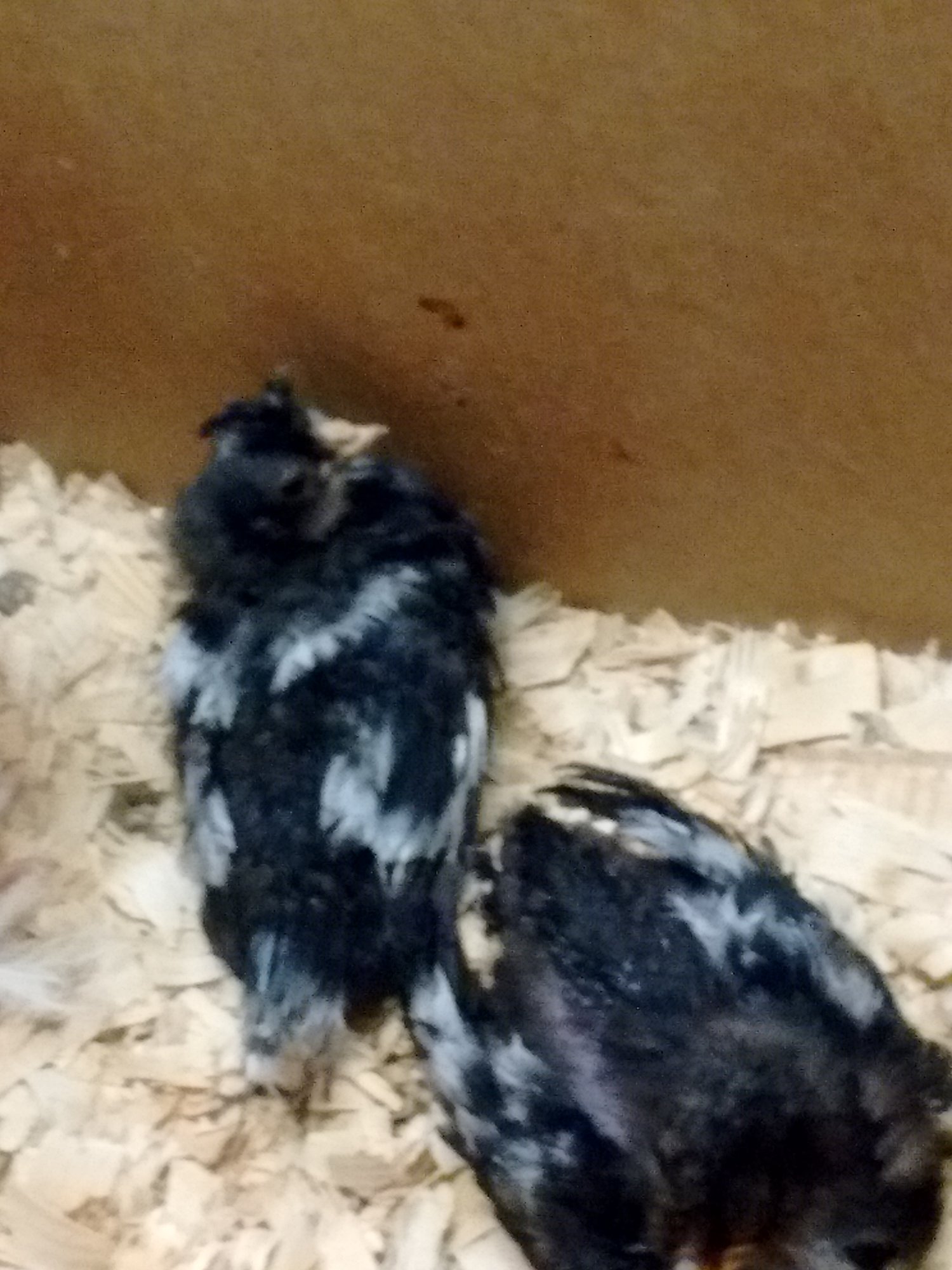 Sorry pics are fuzzy...they are scared of the phone.

I am absolutely nuts about them. Crevcouers are a favorite as well.

It is hard to tell from the pictures because they are just getting in their feathers but I think they are likely dark variations of splash, cuckoo or B & W mottled... Possibly even silver laced. However, I have a few questions that could narrow it down... I don't usually see ones of those variations that are quite that dark as chicks.

I am also not an expert or breeder.

Where did you get them?
Are they pure bred or mixed?
Could you post a picture of their wing feathers close up? (Please spread out the wing feathers so the color pattern is more visible). 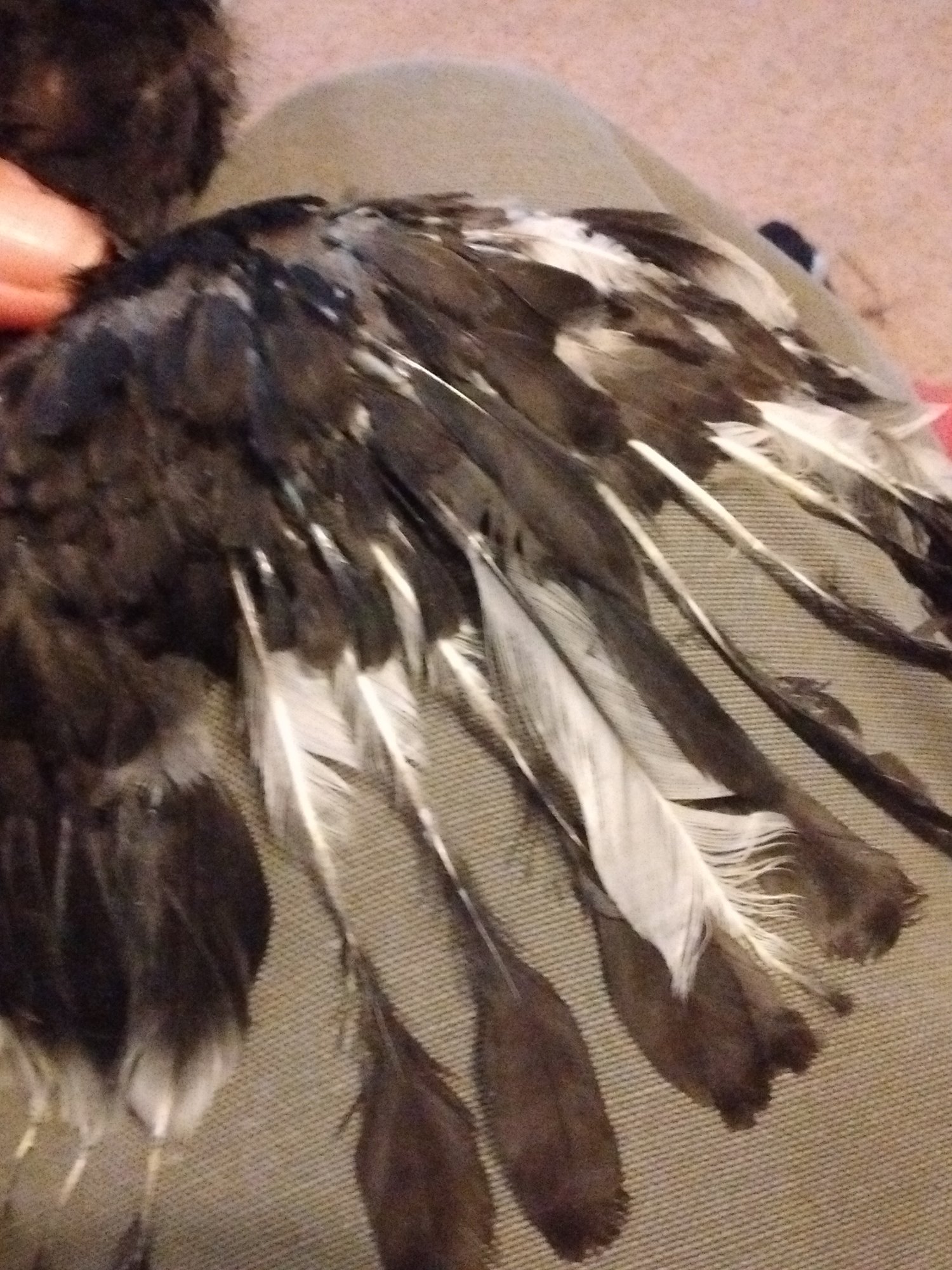 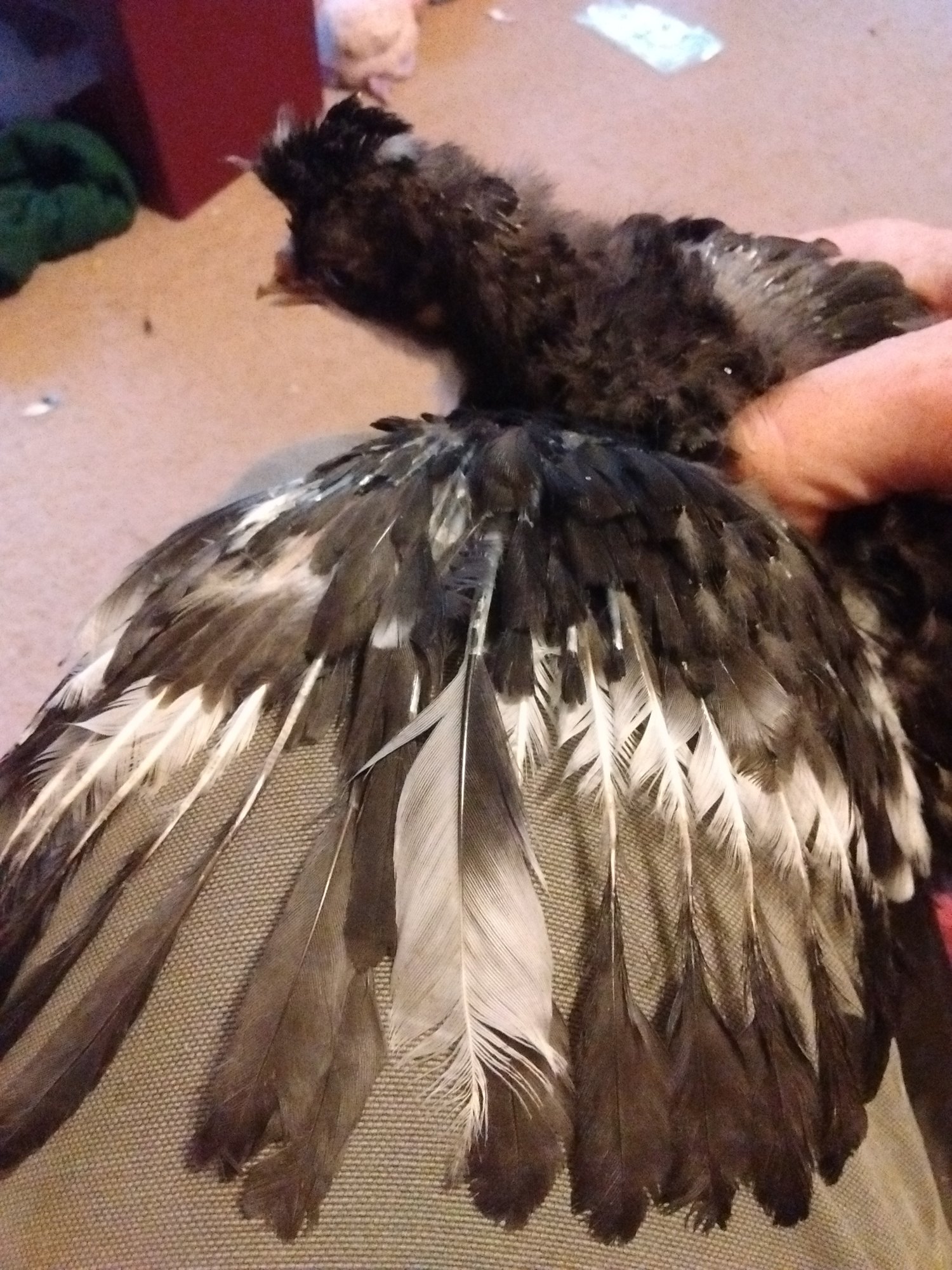 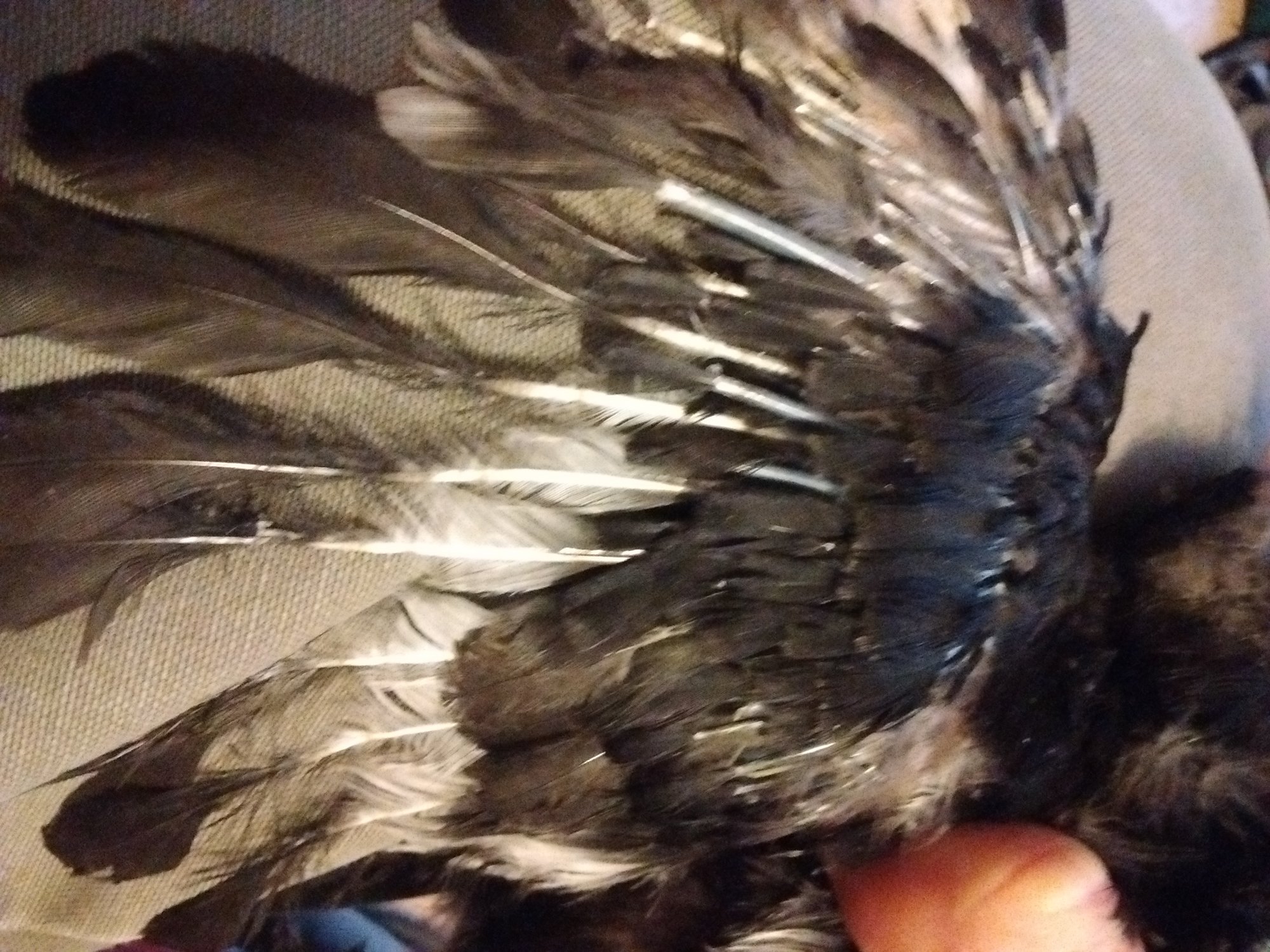 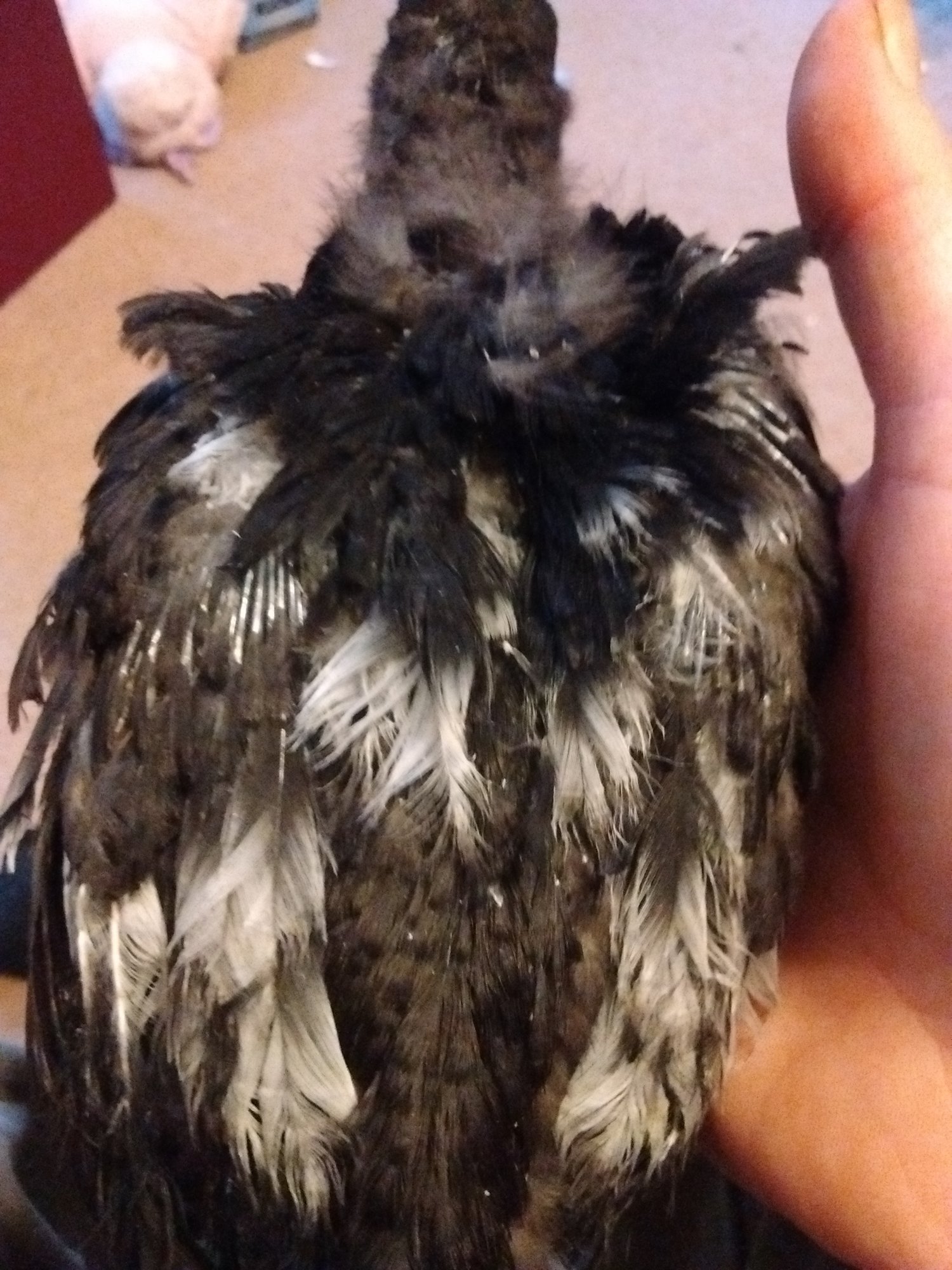 They are pure bred but not the best they're only hatchery stock. They were black with lighter undersides as chicks and suspected possible barring gene in one due to a very small lighter spot on it's head. I was surprised to see the way they are turning out with that seeming solid white straight thru wing and across tail too.i was thinking spangled or mottled of some sort, but it is so uniform.

They still have lots of sheathing to get off the new feathers...they look so scruffy...lol. Are they usually much slower to mature? I have a Sultan about same age that is much more feathered out...all except it's top knot

They are definitely interesting little peeps!

I can't say that I know exactly what color variation they are. However, I am not an expert and others may know more than I.

The pattern looks reminiscent of a cuckoo polish (like you mentioned)... except that your polishes are abnormally dark for typical cuckoo polishes.

Silver laced chickens are usually lighter and more speckled on the wings so I do not think it is likely that they are pure silver laced. However, I think that silver laced is at least as likely as cuckoo at this point.

As for mottled... I have never heard of a true b & w mottled polish (that is basically what a Houdan is... except Houdans usually have 5 toes and are somewhat hard to come by). The closest thing to a mottled polish that I know of is a Tolbunt polish... but Tolbunt polishes have at least a little brown on them.

The last possibility (in my opinion) is that they are a mixed color variation of polish. However, they are still young and may exhibit a more obvious pattern after the next juvenile molt... which shouldn't take to long since peeps grow like weeds (very cute little weeds, that is

Sorry that I cannot be of more help!

However, If it's not a bother, I'd love to see pics in a couple weeks when their feathers come in s'more.

Has me puzzled too. They are just black n white not show any of that calico type coloring of tolbunt polish. I have a silver laced Wyandotte and the placement of white is similar but not quite showing any lacing at least not yet, as the white is all the way to feather edge..more like a single bar. I'll post more pics in couple weeks and we can see what becomes of them. One of the many things that makes chicken keeping so fun, all the guessing and surprises along the way.
Last edited: Nov 2, 2017
You must log in or register to reply here.
Share:
Reddit Pinterest Tumblr WhatsApp Email Link