Questions from an Obsessed with Sex Link/Autosexing and Cross

I can’t quite explain it but I’m obsessed with sex linked and autosexing chickens and also cross breeding purebreds for specific characteristics. I always have a lot of questions about the color genetics or characteristics so thought rather than posting a new post every time I would just keep one and hope that those awesome and knowledgeable people who have answered me before will continue to do so! (Thank you btw!)

First question-
Sex Link cross for chocolate egg layer-
I was thinking of BCM on Silver Laced Barnevelder. Works? Are Barnevelder are slow feathering for second sexing option on fast feathering BCM. I had ordered eggs from Double Silver Laced Barnevelder and they were all consistently a light brown (not even solid brown). I did not keep them to see what they laid. Is this common or do the silvers often keep their solid to dark brown color?

I've not tried the BCM over Silver Barnevelder cross, however I do not believe it will work for sex linking. I have bred Double Laced Barnevelder over BCM hens, and produced solid black chicks, both sexes. Black Copper Marans are black, as are their parent base, not red, so the silver is not likely to produce a sex difference as silver is only dominant over red. Whenever I bred my BCM over anything, the black seemed to be dominant over anything other than barring.

Therefore, I would take the BCM rooster and breed with the Cuckoo hen to produce sex linked chicks.

As to the egg color, even if you have a dark egg parent bred to another, you still can get ranges. Breeding dark to light generally produces a mid tone between the 2 the first generation. You have to line breed back to the darker parent to intensify the coloring. Though of course, you will get throw backs to lighter shades.

You can end up at autosexing fairly quickly if you work with the Cuckoo line and BCM. It would only take about a couple to get double barred males and single barred females, although I have never preferred working with black and white bars to see gender as it is hard for me to see black on white vs white on black of the single vs double barring. I can see head streaks in partridge much easier. The investment in some good quality Rhode Island Reds can further an autosexing program rather quickly (for silver over red).

Just for fun, I'll link my photo of egg generation chart below. I've been working with dark brown and olive in my flock. I've pretty well perfected the olive, now I will return to refreshing my dark brown layers as my F1 and F2 girls are aging as is my pure Barnevelder.

Good luck with your project. Have fun! 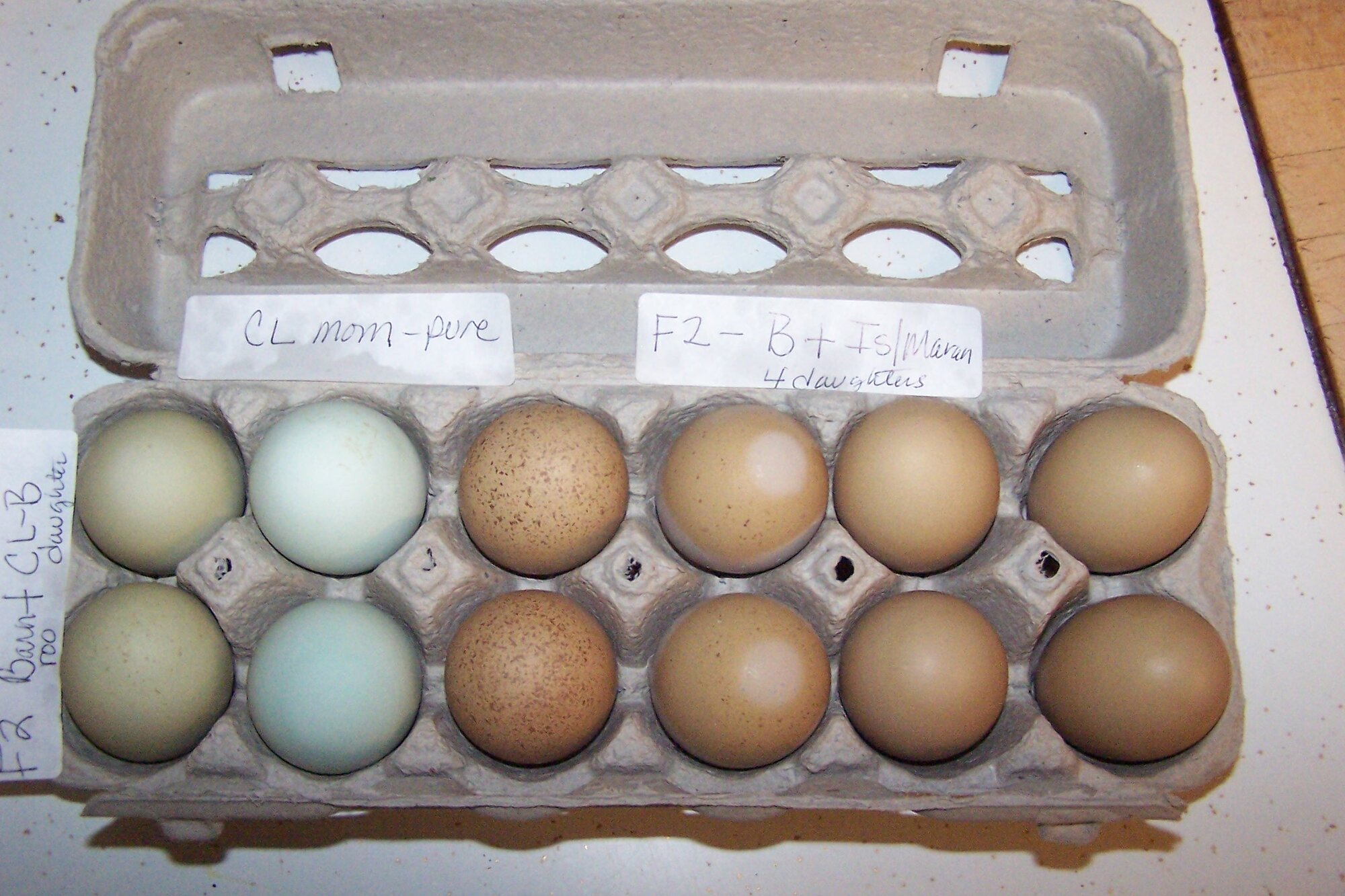 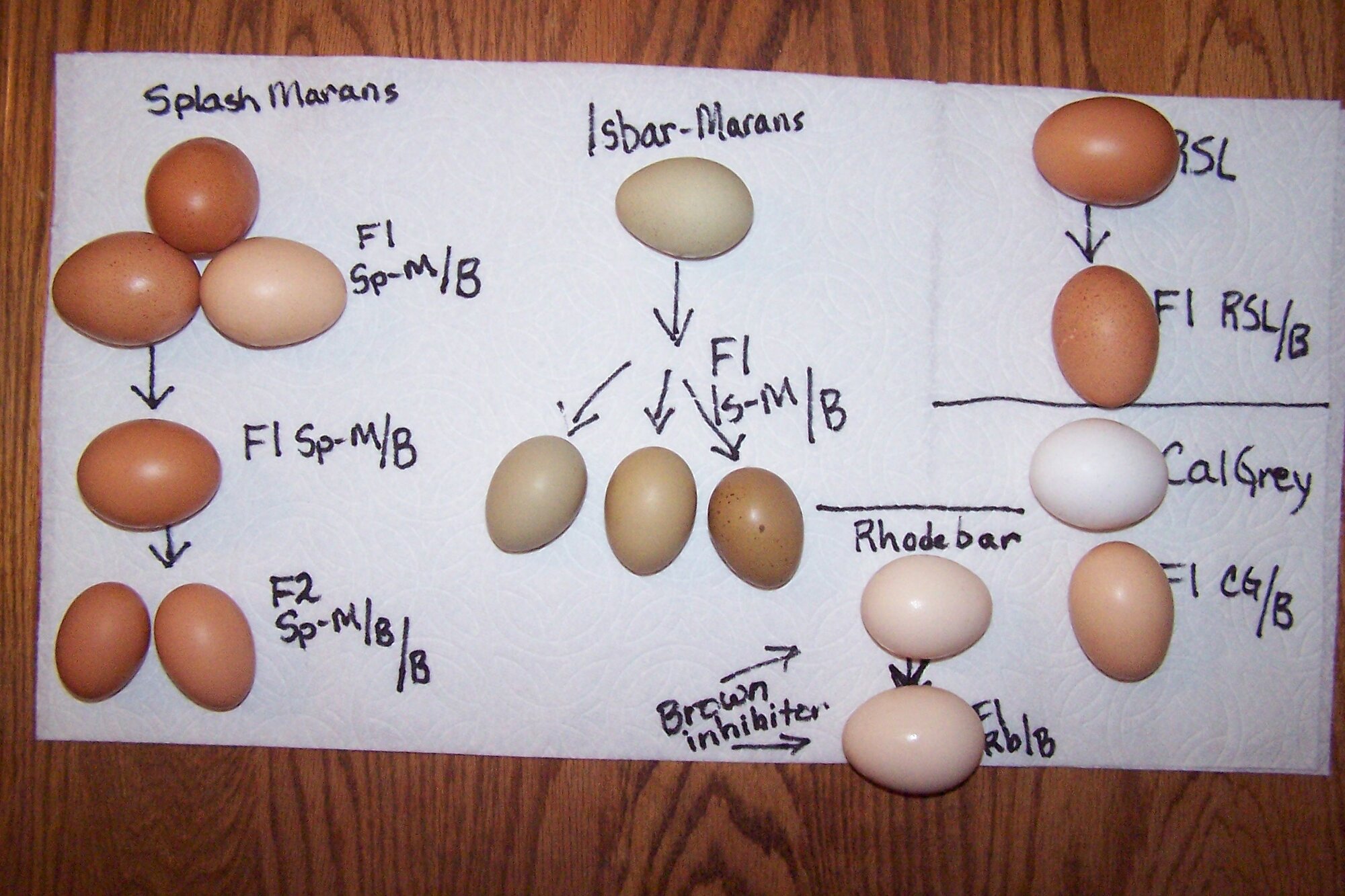 LofMc, Thank you for the reply! What great info. Your olives are amazing!

I was just looking at the Rhodebars at Greenfire.

Question to clarify- the cross you did of the silver Barnevelder on BCM, did you meant the other way around because wouldn’t (for sex link) the roo have to be the BCM and the hens the silver Barnevelder. I think someone did mention to me that it might be difficult to see the silver on black but it should be that only the females would get any silver whereas the males would be black. I know a breeder who does Blue Copper marans with no Copper. (Dark blue head on the blue and the black offspring from blue breeding have no Copper). I was thinking this could be key to seeing the silver earlier.

And yes, you would need a BCM rooster over silver hens....which I've not done...but working with BCM, I find the black pretty dominant, and I know that silver (hen) genetics is only dominant over red based (roo) genetics....which led to me to my conclusion that I question you'd get clear sex linking with BCM rooster over Silver Laced Barnevelder as there isn't enough red base to be dominant over, and the lacing doesn't offer a head dot like barring.

I will step fully aside, however, if someone has done a BCM rooster over a Silver Laced Barnevelder hen and found any reliable sexing marking....but I think the silver will get buried in the black genetics.

Ah! I see what you are saying now. That totally makes sense. Thank you.

I think part of my problem (I keep getting mixed up) is that I think of barnevelders as black bird with white or gold “lacing” not silver or gold birds with black lacing. Same with the Wyandotte’s or Polish.

But people don’t tend to do that is it because not sexable at hatch have to wait? Or...?

My understanding is the Double Laced (gold) Barnvelder is brown feathered with double black lacing....I know that bred over red birds F1 gives me a first gen of red base with incomplete black lacing.

You might try playing with the Chicken Calculator here, you can learn a lot about the genetics and anticipated crosses. I'm not getting sexable down for Double Laced (gold) Barnvelder over Silver Laced Barnevelder....chick down both sexes, as I expected, is partridge...technically black patterned gold duckwing in adults, with difference between male and female in adult coloring but not at chick down. Ditto for BCM rooster and Silver Laced Barnie hen.

Click on the "Help Pick Color" (just the right bottom corner of the little chicken picture) for a quick cheat for genetics of the various color combinations. Barnvelder is "Double Laced" for the brown-gold/black laced bird, and Silver Laced black tipped for Silver Laced Banvelder. Use Black Copper for the BCM.