Well, it aches me to say that Ladybird passed away a little over 24 hours ago.
I'm not sure where to start and figured I'd let the community know and maybe aid me in "getting over" this.
To say the least, my biggest nightmare happened and I about lost it.
The death was even more worse, I ended up screaming bloody murder, picking up her body and head and driving her to the taxidermist.
I promise you, it was as traumatizing as I state it and I pray I'll remember her in a better, happier time.
Whether I'll get her mounted, bury her or cremate her, I'm unsure yet.
I understand "stricken with grief" now.

A little about her.
In 2007, I began getting chickens and in early 2008, we got more (duh!).
My life wasn't the best and this was a new "start" for me.
Somewhere in the mix of miscellaneous fowl, I began having favorites, preferably this pretty blue bantam.
But I always had this little grey bantam following me around (how I got my name) even as a chick, I now believe she was the same peep that always followed me.
When an owl decimated the flock and my little blue bantam was a no-show, I had hard feelings for the little grey bird.
To me it was unfair my favorite got eaten and she was alive.
But I was her world and yet I wanted nothing to do with her.
She would wait outside the door for me and one day, while going out, I opened the screen door and she rolled under, brutally breaking her little leg.
I hate to say it, but we spent 3-4 months together with popsicle sticks, scotch tape and paper clips. And another 2-3 months total of me rehabilitating her. 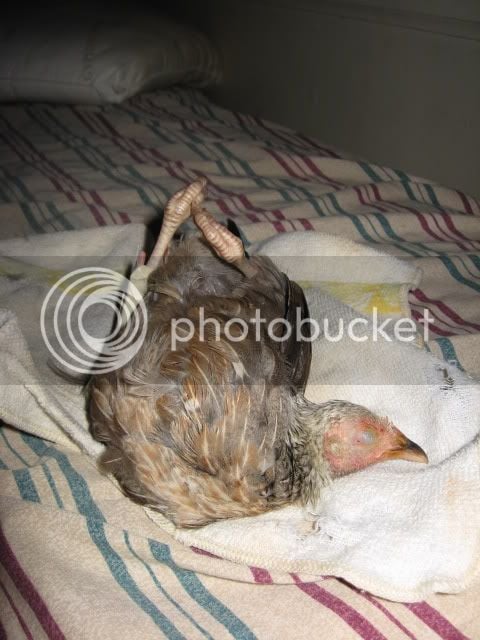 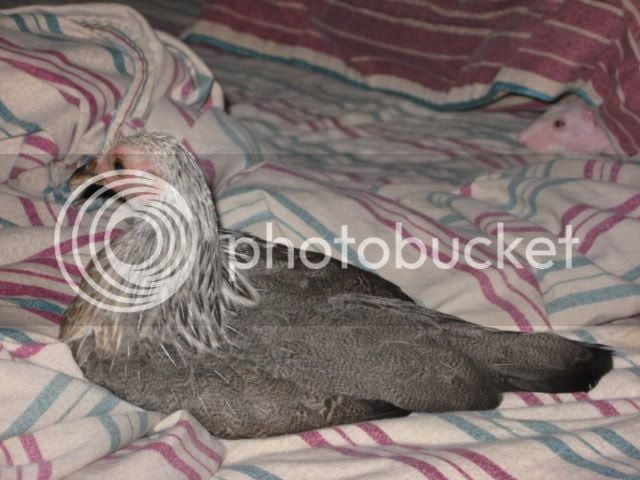 She spent time in a shoebox in the backroom, but she hated being away from me.
Of course, I was guilted into caring for her and so our story began.
Our home was "U" shaped and when she could hobble, I'd wake up from being passed out with her on my ankle or snuggled next to my face.
I spent a lot of the week alone with BF at work and she got her name from us watching "king of the hill together" at midnight.
Late at night, I'd carry her to the front porch where moths would flutter to the light and she'd learn to peck moths off the porch.
We'd also go on these late night "grasshopper" hunts in the dark with a flashlight in my mouth, a bird in one hand, and my other grabbing bugs off the tall grasses.

She became the little light at the end of my tunnel.
We moved 200+ miles and she came with us.
I have no idea what happened, but 3 1/2 years passed and she was my world.
And I know, it seems silly, "it's a chicken" oh but to me, she was so much more.
She was my best friend and my little girl, especially when the poop hit the fans a-many times.
Whether we were gardening or napping or cleaning animals/stalls, she was with me, clucking nearby.
She spent many nights curled up on my chest (with a towel underneath me) and was so attached to me.
If I accidentally left her kennel door opened, she'd find me, hop on top and nap.
I woke up one early morning (5 AM) with her trying to dig herself underneath my arms.
She watched me raise a few batches of puppies, raise a few bottle calves, hit the nursing homes and sat on Grandpa & Grandma's laps.
She lived in a huge expensive dog kennel in the house and every night before bed, there was a Good Night.
Every morning, there was a Good Morning and on summer days, if I slept too late, boy, she'd let me know.
There were teasing conversations and if I looked away, she'd give me an earful.
We had drives into the pasture, down to the lake, around it, into town, and at the grocery and feed store.
She was well-traveled, well-loved and just the most amazing bird.
She chose me when I needed someone and was truly my little guardian angel. 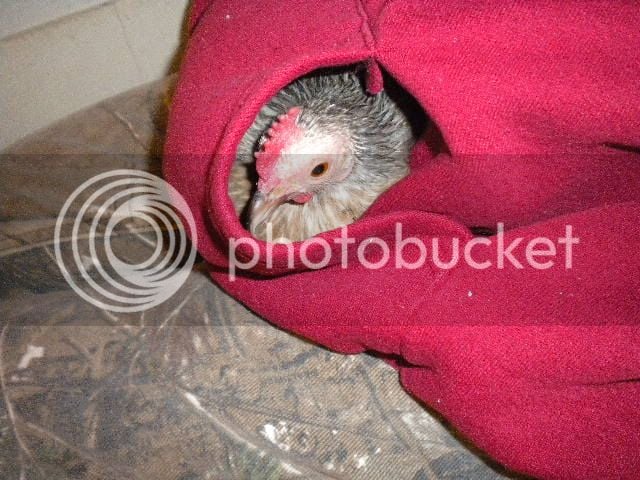 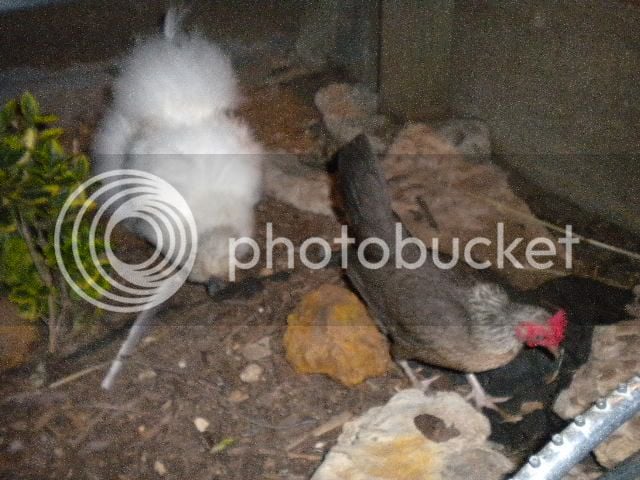 You bet your rear end, if I took photos, she was in a few of them.
I cooked for her. She would sit in the truck and if the ride got too bumpy, she'd crawl into my lap.
I had a scale I'd weigh her on weekly and she'd slide across our linoleum floor.
She spent a lot of time on my lap while studying and sometimes, on my head (if I ignored her). 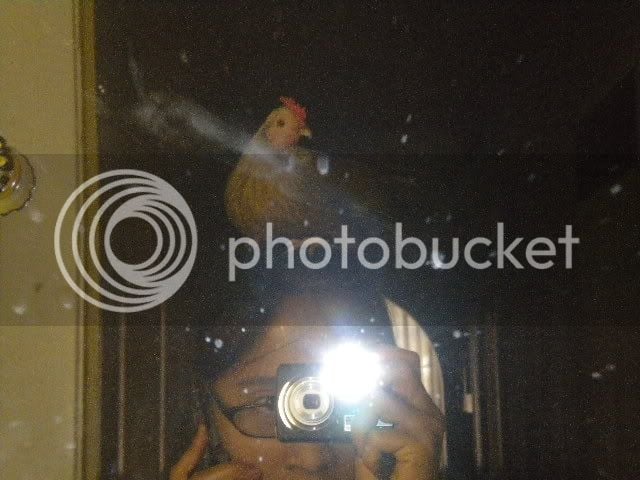 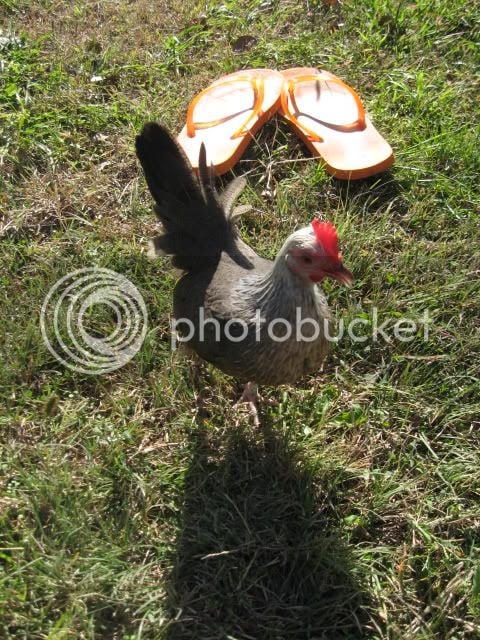 Oh and how she loved wheat-heads. She'd find those no matter where you left them, especially for decorative purposes.
I was scared of everything... if your feet were too big, if I saw a big toad or a strange large bug, I'd run the other way, her in my arms.
I was sure everything would eat/step/squish her. And boy, she loved eating the lead paint chips T.T I nearly had a coronary shaking it out of her beak.
We had a buddy system, we were always chirping and conversing with one another.
She had the prettiest golden eyes and was such a stout little bird. 15.5-16.5 ounces and I called her a fatty and that I would eat her someday.
She snuck into a lot of places in my hoodies <3 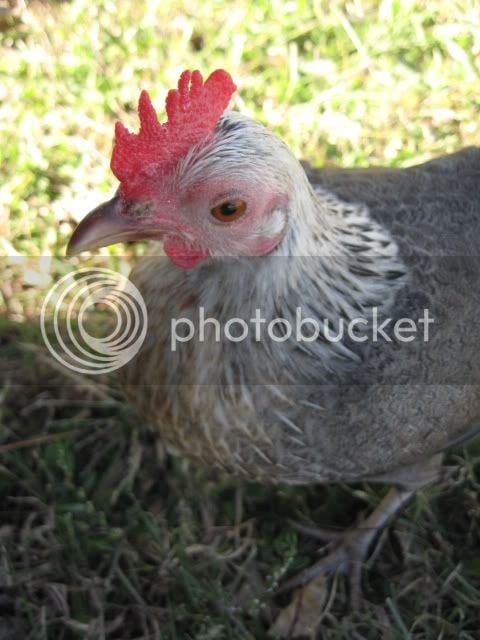 I guess, long story short, I loved her to death.
I'm not sure how things will go for now, but I'm glad her death was fast.
I'm still balling like a baby and I know I'll hurt for awhile.
I had so many plans for her and 3 1/2 years was just too short.
I would give up everything I own and all my money to bring her back.
I'll miss all the wonderful memories we had and the many things she taught me.
We were so alike in personality and when it comes down to it, I'm so glad, I could love and be loved like this.
I honestly believe animals are angels in disguise and I have honestly been blessed.
To me, animals are almost like soulmates. Some are lucky enough to fall in love again.
I have been blessed to have so many wonderful animals in my life and she was one of them.

I hope you guys don't mind me posting more photos of her on here...
I don't expect anything, just a little piece to remember her by and to remind me that death isn't the end. 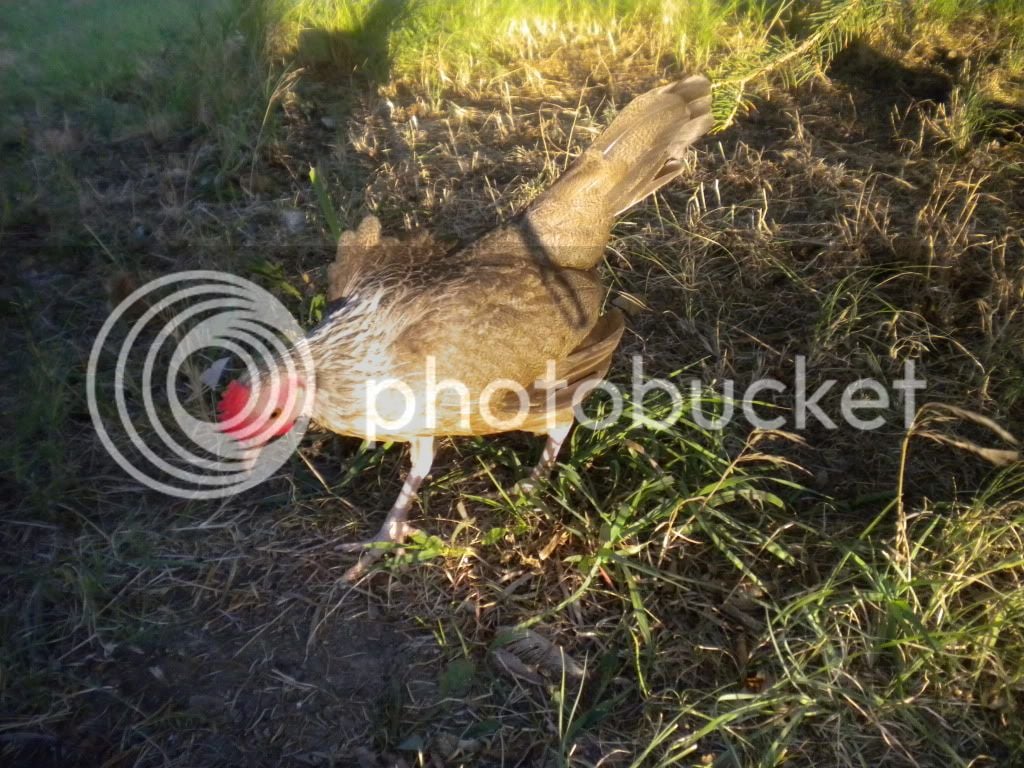 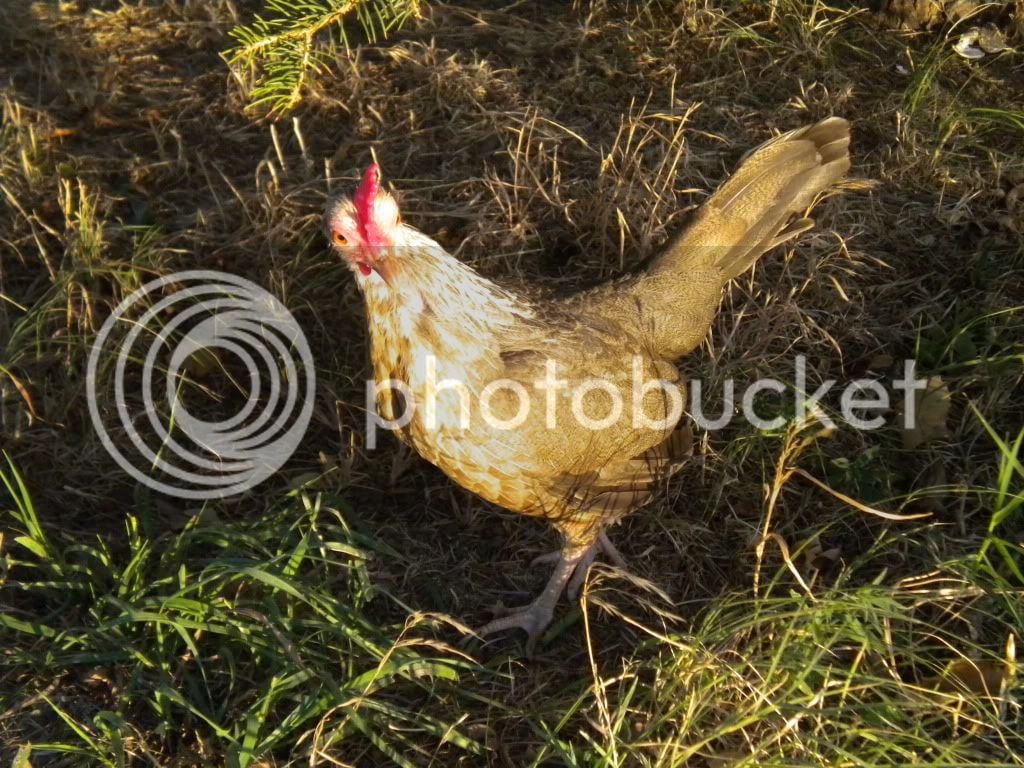 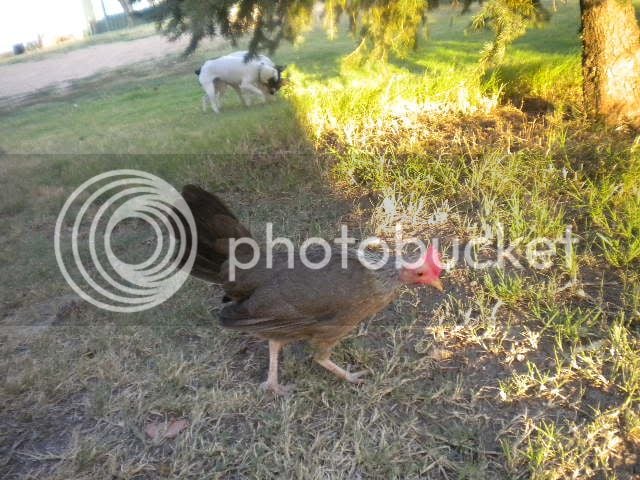 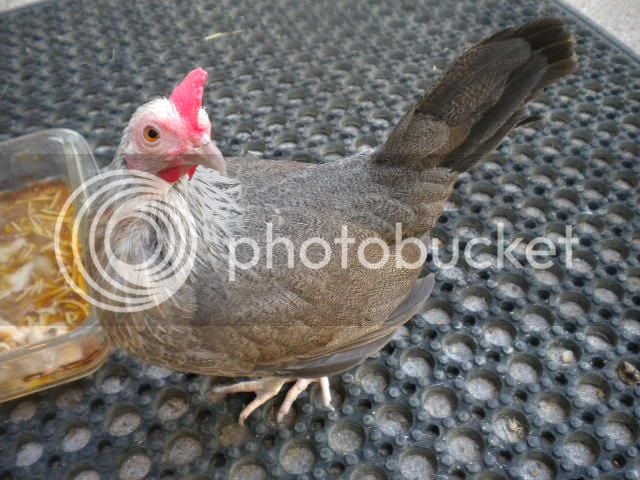 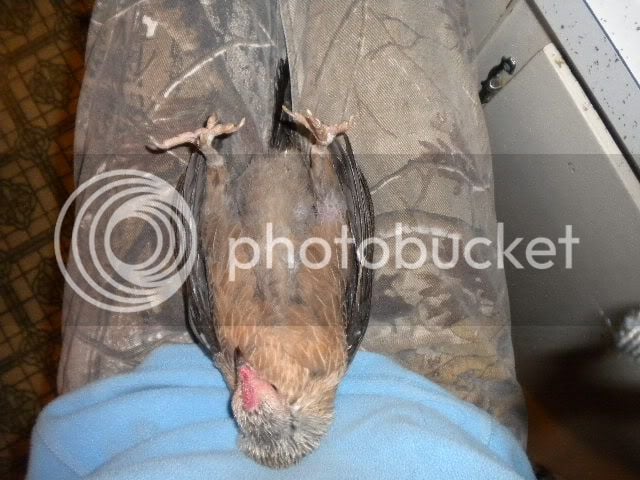 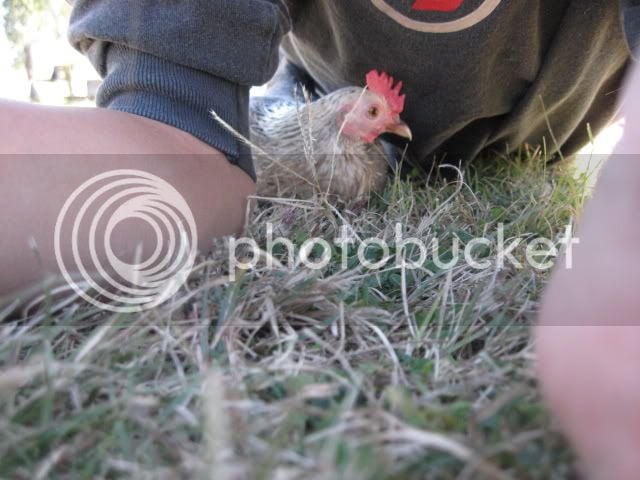 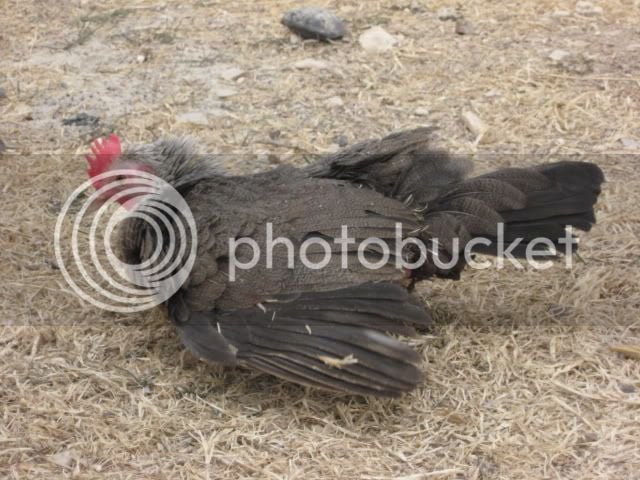 So sorry for your loss! She was really really pretty. Your little grey bantam was such a special girl. It's amazing how close we can get to them.

Pretty girl. Sorry for your loss.

What a charming story! Sorry you lost her but she led you down a wonderful path.

I truly believe that our pets will be with us in the afterworld. You'll meet her again.
K

❤ She was such a cute little girl. It will be painful for a while so cry when you need to. In time, the pain won't feel so raw and you'll be able to look back on all your happy memories together with a smile rather than tears. I pray that God give you comfort, healing and peace.

My condolences.... she was a beautiful and special friend.

I'm so sorry.
I had rooster who was very close to me pass this year...it's very hard.
And you are totally right about animals being guardian angels.
I found one of those little mushroom birds you get at the craft stores that looked like my boy. It's on my dashboard in my car.
Maybe you could do something like that?

I’m late, but my baby crossed the Rainbow Bridge 😭💔