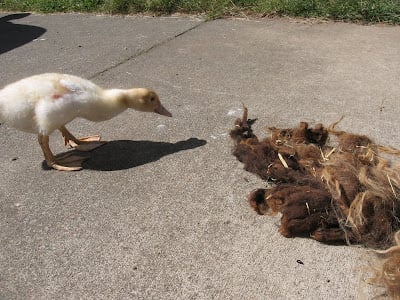 (if I made the link work right) Here is a photo of the duck I lost last night. He was a duckling when the photo was taken, helping me sort out some wool - but full grown when the raccoons got him. I'm super-sad because it was the most affectionate bird. It's the 9th dead Muscovy duck this week! Add 2 injured ducks and one seriously injured chicken to the mix and we can thank those nasty raccoons for choosing our farm for their dinner reservations.

Aside from the dwindling Muscovy duck population, I have two flocks of chickens. The 40+ leghorn hens (plus 4 bantam cocks to guard them) have been extremely jumpy since the day before the first raccoon attack. If one of them moves their head too fast, the rest of the flock spooks and scatters in all directions. They are most jumpy late afternoon through bedtime. They also start crowing at 4:30am which is new for them. I think that the raccoons are going near the hen house at these times.

With all these hurt and dead birds around, I'm beginning to despair. I don't know what else I can do to keep them safe. Death by raccoons is so horrid.

Live traps don't work. (I'm suspicious that these are urban transplants which are almost immune to traps - apparently it's kinder to have the raccoons kill farm animals than rummaging around city garbage cans) Poison and guard dogs are not an option for us. I've been clearing away all the brush but that makes no difference. [edit - I forgot to say: even if it was legal to fire a gun where we live, we don't have one.] We've stayed awake the last 4 nights with flash lights, patrolling the yard every hour or so to scare off the monsters - no luck. They still got poor Keats.

There are two lone raccoons and a gang of at least 6 raccoons that have suddenly found our yard - attacking the chickens during the day and the ducks at night. We had absolutely no problems with these predators for over a year. Why are they suddenly invading our yard? What more can I do to stop them? Should I just give up on poultry all together?
Last edited: Oct 10, 2010
O

They've started invading your yard because they've figured out there's an easy meal to be had there. You can't get rid of all the coons, you have to protect your birds. Are you locking them up at night? And you said you've had daytime problems as well? Are they free-range? In a run?

You could try baiting your traps with the remains. I've also heard of people putting radios (NPR) on in the coops.

The chickens are in a run. Actually they have two pastures that I switch between. They get locked up tight in the henhouse every night. It doesn't protect them against day time raccoon attacks.

I'm almost positive this one was hurt by a raccoon. They have plenty of shelter from sky-monsters and it happened at the time of day I suspect the raccoons are visiting.

The ducks on the other hand, refuse to be confined at night (or any other time). They do have a secure shelter that is just for them that gets locked up at night if anyone chooses to go in there. I raise the little ones in there so they know it is a safe house. But they never use it. They are impossible to round up. As they can swim and I cannot, they get to sleep where they like.

The main area of the property is surround with 8ft. game fencing (works really well at keeping dear out by the way) which kept the raccoons at bay until now.

You might want to look into a product called Nite Guard - you can google the name for their website.

I have not used it, but I have read of other BYC members who have used it successfully against coons.

I had a similar problem, a racoon family lived and thrived in my barn loft, but would NOT go into the LIVE trap. Thus, thanks to this site, no more. Here is what I did: Bought a can of (****BYC does not condone illegal means of predator disposal *****) set it in the loft and hoped it would work before something I owned ate it by mistake. NO KIDDING, turned off the loft light and left the barn and walked to the house. My son stayed in the yard about 10 minutes and he heard a thunk in the loft. The coons had all three eaten the bait and were dying that quick and we have not had a coon since. I was able to pick up the bait and not worry about it getting into the wrong mouth. Success, works for skunks too. I wish you luck, it can be daunting and so heartbreaking.

ETA: This would need to be monitored closely and picked up and put safely away if you had to leave the area. Just in case someone didn't think of that. Anything that likes sweet stuff would be subject to eating it. DO NOT LEAVE UNATTENDED.
Last edited: Oct 10, 2010

I have VERY simular issues here... thought rat, but a friend suggested weasel... both would fit. The first attack, I thought raccoon, but the second attack was just not quite raccoon like. Little wyandotte pullet lost her meat off the back half of her body, top of her head, and the last inch of her left wing. She is doing great now after i treated her wounds and put her on meds.

Just wanted to share... it may not be a raccoon. Lots of things injure the critters and not kill them (all).

I put out some "nite guards" and sured up the tractor they were in, and moved it FAR away not just a few feet like normal. I haven't had a problem since. Meanwhile I'm setting up live traps to catch and re-home whatever it is. Good luck!

Quote:
He tunnels thru your barn floor in a frenzy to get the coons, like a KamaKazi Mole on a Mission!!

I'm still ROFL from a previous post, I know how he feels!