So recently we had hatched out a single Ayam Cemani chick. I was REALLY not looking forward to having him alone but none of the other eggs hatched. So I went on the look out for some buddies, I asked around all the local chicken people I know but unfortunately its just not the time of year most people have chicks. So I heard Rural king had chicks so off I went.

Only planned on 1-2 but in Ohio there is a 6 bird minimum....then when we got there I told my kids they could each pick out 2. After they picked the guy offered me a really good deal on some others.

So we ended up coming home with: 8 Asian Black pullets, 2 Easter eggers, 1 brown leg horn, and 1 black sex link. The asian blacks he only charged me $1 each for so it was hard to pass them up!

Without further delay, here is pictures of the chicks and Rex <3 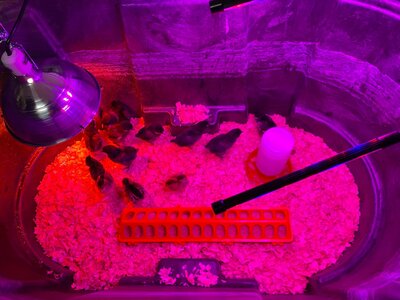 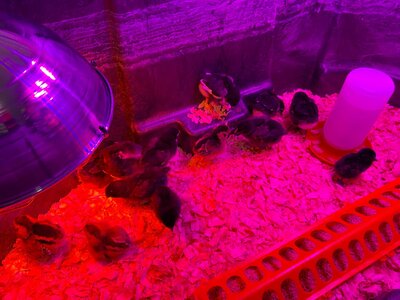 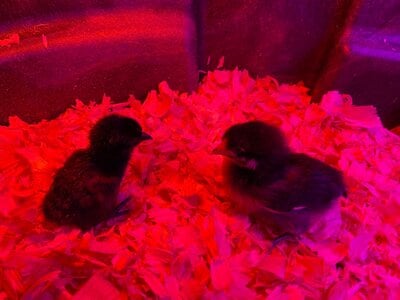 You give "chicken math" a whole new meaning!

It's a great time to start this years chicks. You will easily be able to sell any extras in the spring.

azygous said:
You give "chicken math" a whole new meaning!
Click to expand...

In all fairness, usually we keep 20-30 hens in our main flock but we had a predator problem last year that took out our whole flock. We planned to build up this spring. Then we had a random chicken dumped on our property but we didn't want her to be alone so we got her a couple friends off some people we know. So currently we have 5 adult hens. Then its gone downhill from there. We only had one Ayam Cemani chick hatch and I hate them being alone so that's how we got these. I most likely will sell some of the Asian black chickens when they get older this spring

So we want to get back up in numbers for our main flock then we are breeding the Ayam Cemanis for a breeding set up so all of them will be in a coop of their own. I'm hoping to actually get two breeding projects going by this summer but one thing at a time

Percheron chick said:
It's a great time to start this years chicks. You will easily be able to sell any extras in the spring.
Click to expand...

That's my plan. I really only wanted 1-2 of the asian black chickens but for $1 a piece I couldn't really pass it up

D
Who else is raising Asian black chicks, and wants to share?

I finally got my babies

Filling the brooder with “filler chicks” good or bad idea?