Hello folks, been lurking in this thread for a good while now. I'd like to ask for some opinions on the sex of the few remaining silkie chicks from our tag-team hatching that occured back at end of May of this year. I have a specific thread dedicated to this first time hatch along of our silkies. Today I took fresh pics. Cropped them and posted a few pics and mini background details on each of the 5 remaining chickies. Each chickie got it's own post for keeping things clear and simple. They are all over 13 weeks old at this point.
A) a chocolate silkie
B) 3 salt-n-pepa silkies
C) Not a silkie -from a Brown egg oops. And if you want to know it's history then got to page one and get the whole kit in kaboddle.

Because we live in a DSL only option area outside the city limits... I have to do this for ease of uploads.

Start at post #73 for the facts on which silkie is which.

Thanks for understanding as my upload speed is typically 0.34-0.5MB/did see

I have white silkie hen that will chase one of our cats she has deemed a asshat lol. Even when he comes closer to me just to rub on my leg. She will stand up right flare all her feathers and go nuts on him. He is a nice cat never goes after any of the chickens but made the mistake of drinking out of the water in their run one time and she was having no part of it.
M

wow that is a lot of duplicated pics!!

Two separate chickens. I've been told they're cockerels. I'm hoping not. I can take better pictures later if need be? Thanks in advance.

I've sexed these two for you on your own thread and explained in words and pictures why I think (know) they are both cockerels.

Sorry that's not what you wanted to hear.

I've got at least 4 out of 6 chicks of my own atm that I'm going to have to rehome, so I know how much it sucks.
F

aoxa said:
I really think we need a thread describing key factors that are used to foretell the sex of their silkies. I know there is a thread for sexing EE's, but have yet to find one describing the difference between one of the hardest to sex breeds.. So many people are asking if their silkie is a hen or a rooster on here every day, and I have heard from silkie breeders that by the age of 3 months old you should be able to tell determine the sex of your silkie with ease.

Please feel free to send me photos of your cockerels & pullets. I would love to include some of your pictures in the original post

SIGNS YOU HAVE A ROO:

#1: Streamers coming out of the back of their crest. These streamers will begin to develop between the ages of 4-6 months. Picture of my Roo's crest.

**Note: I'm noticing streamers in his offspring as young as 8 weeks old** #2: Generally Silkie males will hold their bodies much more upright than silkie pullets. #3: Silkie roosters will have long hackle feathers which are rough in texture. 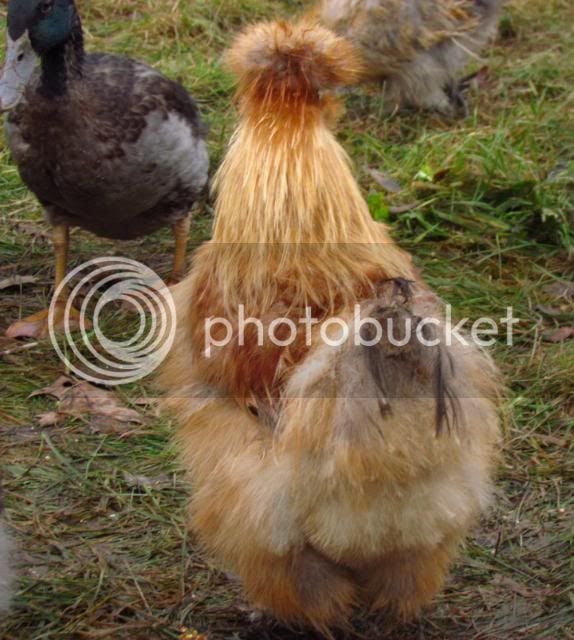 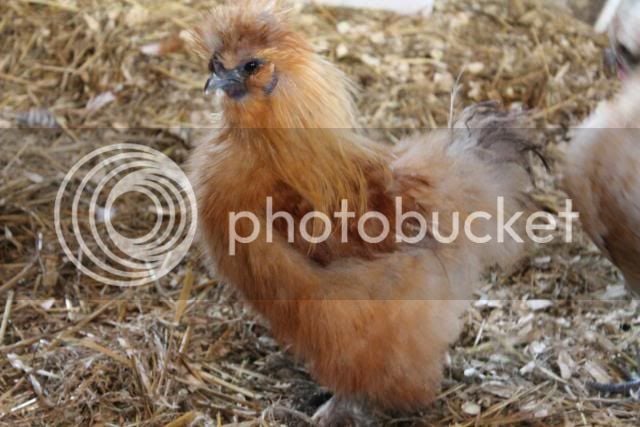 #4: MOST Silkie roosters (Not talking SQ stock here) should have a larger walnut comb than a hen when mature.
**Bearded silkies have the big poofy beard under the beak and should have barely no waddles (or the mature boys will have very little ones you can barely see ) where non-bearded will start to grow waddles pretty early (boys and girls will develop noticeable waddles with the non-bearded (clean faced) variety) ** 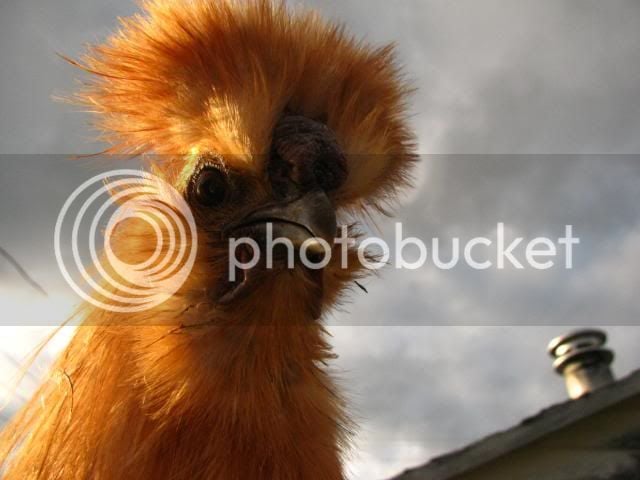 Besides the obvious - roosters crow and hens lay eggs. Are there any other signs anyone would like to contribute?

NOTE: These are all visual determinations of the sex difference. There are many behavioural aspects to sexing silkies as well. Not sure if I should get into that yet or not

Remember, I have limited experience with silkies. I am just stating what I see between my pullets and my rooster, and what I've read online. I do spend WAY too much time reading about chickens.

If you have time (on a weekend or a day off), sit outside with your silkies and watch their antics.

You will soon begin to notice behaviours in the boys that you will not notice in the girls. *Do not sex them as chicks based on behaviour.*

#1 Cockerels will be on watch a lot of the time. Even my young cockerel (4 months old, though not a silkie) has stood watch from a very young age. The boys are more social than the girls. If they are with others their own age they will most likely be head of the flock. If you have more than one rooster, one will be Alpha, one will be Beta.

I only have two roosters, both get along great. My silkie is my obvious Alpha rooster. My Barred Rock cockerel is Beta. Steve will not permit Jagger to breed any of 'his' hens. I'd like to see him try to mate my silkie pullets

#2 Silkie roosters start crowing (on average) between 4 and 6 months old. Don't let anyone tell you their crows are meek compared to that of their standard counterpart. My silkie rooster is LOUD.

#3 Silkie boys have a natural instinct to protect their girls (as do 99% of other roosters). Most silkie roosters are docile (up to a degree), but will do things like.. Flare their hackle feathers.
** Someone mentioned that their hens have done this, however, I have never noticed my silkies doing it. My other breeds do. Not my silkies** 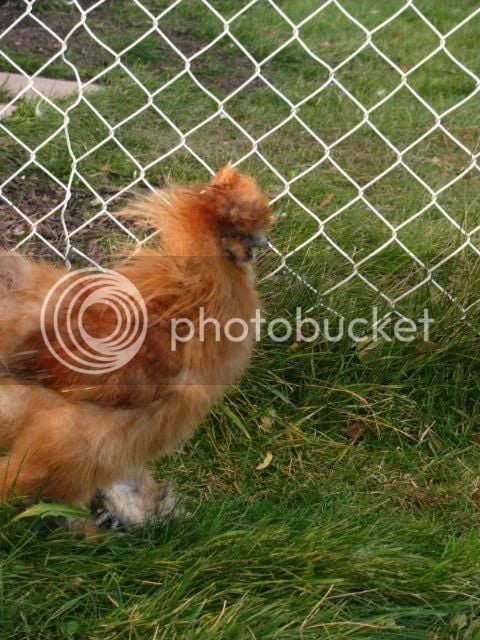 as so. I have yet to see any of my female silkies do this. I spend WAY too much time with my chickens

I am out watching my chickens almost full days on weekends (weather permitting), and from after work until dark. I hope to one day soon own a small hobby farm.

#4 Normally the lowest on your pecking order will be bullied by nearly every other chicken besides the rooster. My rooster is more apt to peck the head hen than the underdog. He will break up fights between the hens. It doesn't take much of his assertion to end the squabbles. 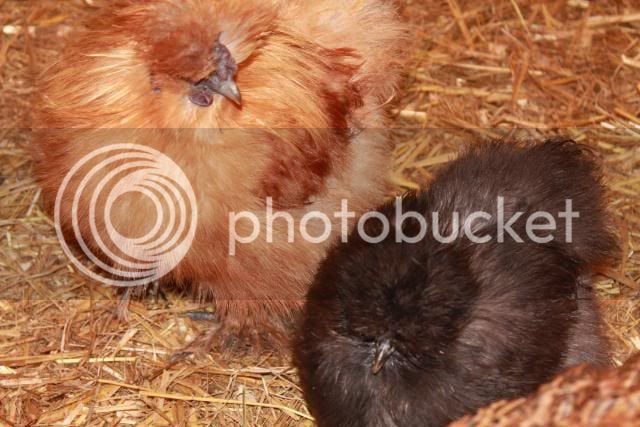 #5 You will notice "tidbitting" from ONLY roosters **or hens with chicks, but if you have a hen with chicks, you obviously already know they are hens and not roosters!** They will make a strange call that I've only heard come out of my roos. They will pick up a piece of food, drop it, pick it up, drop it, etc. until they have the girls paying attention enough to come over and claim the piece of food. Youngest I've seen this is 4 months, but that's just my experience. 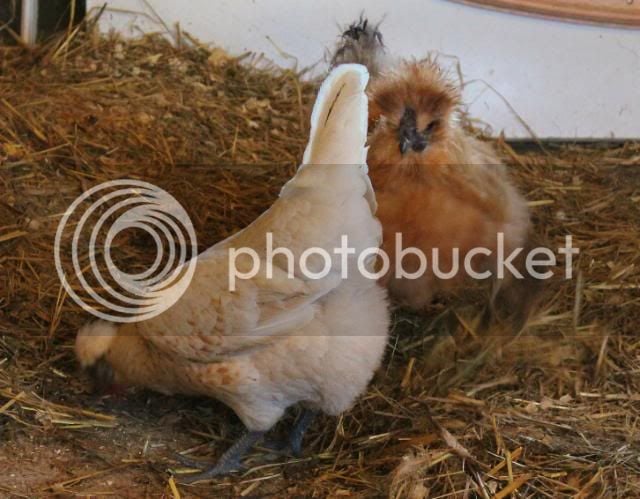 They will also do this in attempt to mate even if they have nothing around them. It's sneaky..

#6 Of course mating.. This behaviour can start as early as 3 months old, but for those roosters that are not alpha, it may be much later. My rooster will drop a wing and shuffle around the hen until she submits or runs away. This behaviour is best observed in the morning when you first let them out.

Mating Dance
Here is a video of a rooster doing the mating 'dance' as many call it. Do not let him do this to you. I most definitely would not let him do this to my kid. This is not my rooster. Just a good video showing the dance only a ROOSTER will do.
**Note: I was informed that some gamey types of hens may do this wing cutting if they are without a rooster in the flock. Just as some hens may crow. It is definitely not as common as a rooster doing it, but it could happen**

Hormones RAGE in the early morning

I will have to take a video of my rooster doing his morning activities. I will not tolerate aggressiveness towards the girls. He is such a great rooster, so I normally don't need to intervene.

Please feel free to send me photos of your cockerels & pullets. I would love to include some of your pictures in the original post 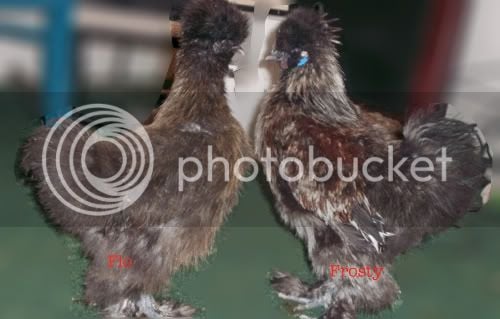 Thank you for the informative post. I have 7 chickens that I got at 6 weeks old (hatched on 7/1), that wesupposed to pullets, but at least 3 or 4 are cockerels. Of my 3 Silkies 1alwayes been much larger, and a few daus ago it crowed for the first time. I don't see the longer head, neck or tail fearhers or a difference or comb or wattle from the 2 hens, so not 100% sure yet if it is indeed a male. I've seen him play fight with my little d'Uccle cockerel, but also seen the 2 pullets do this. Can you please take a look and tell me what sex you think this splash (gray or blue?) Silkie is. Thank you

@FoxySonia We need some stills of the bird in question, standing side on, and close ups of head, comb and crest.

And wow, those pantaloons!!!
F

Chicalina said:
@FoxySonia We need some stills of the bird in question, standing side on, and close ups of head, comb and crest.

That's not an easy task but I'll try. 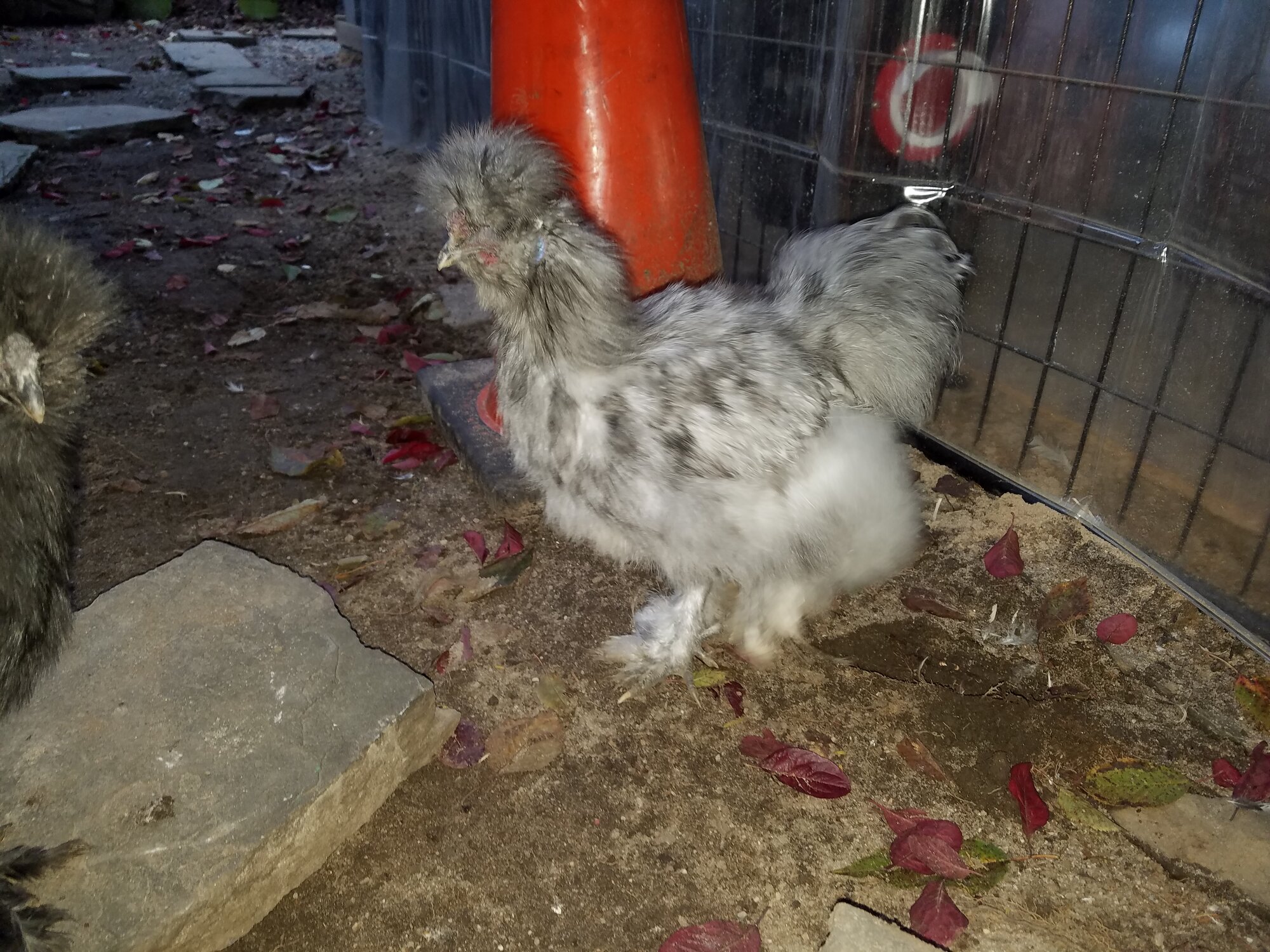 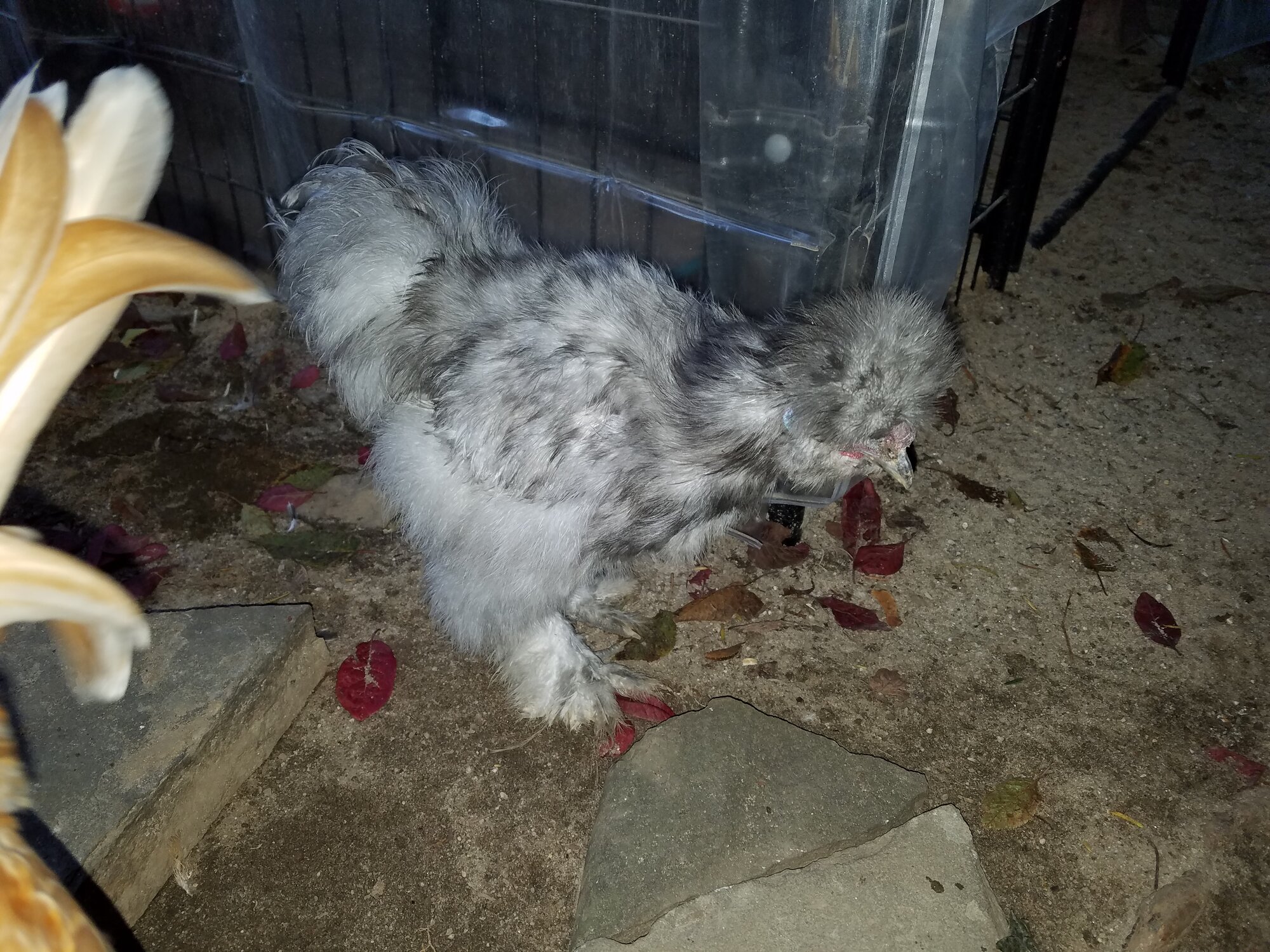 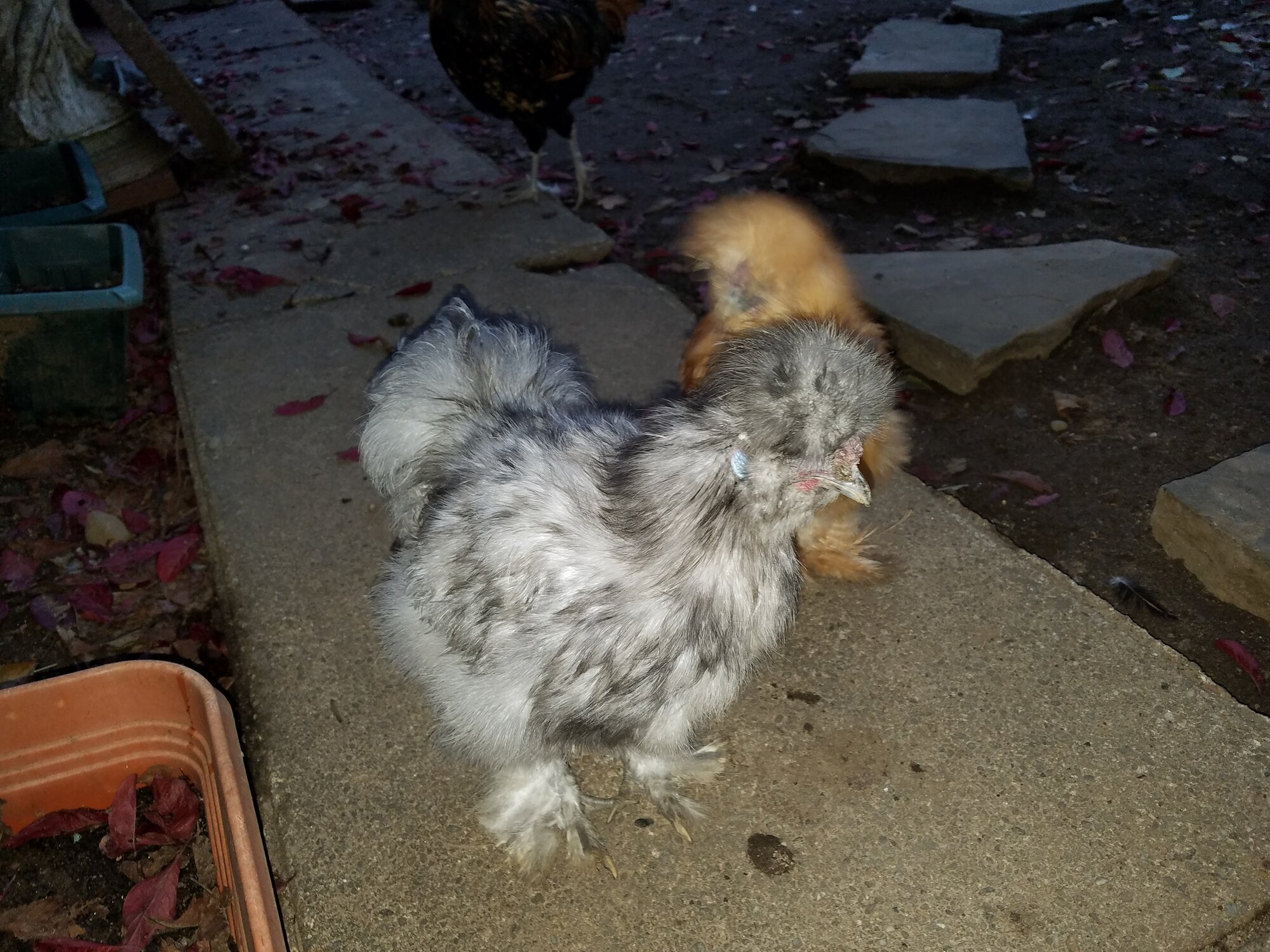 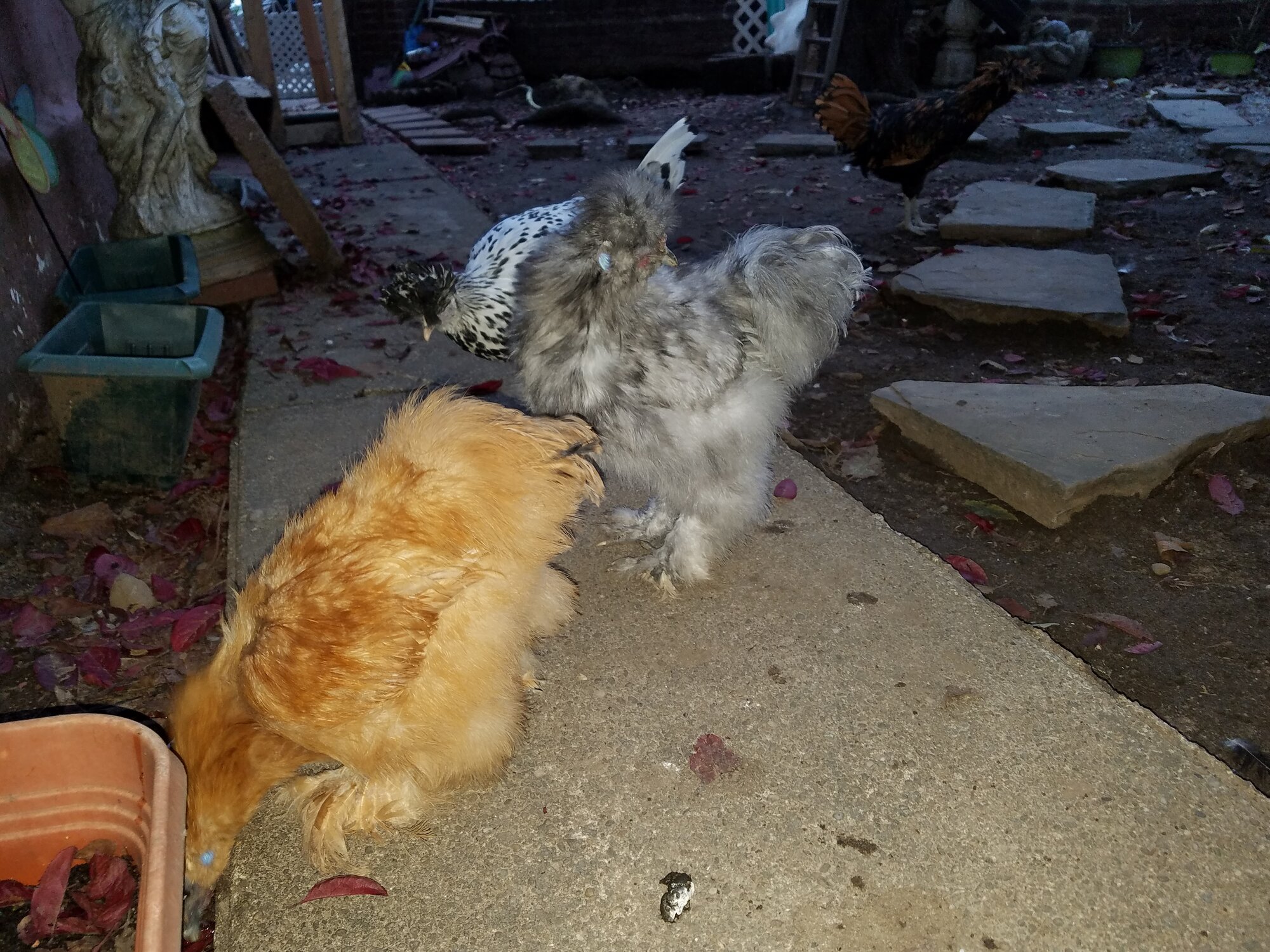 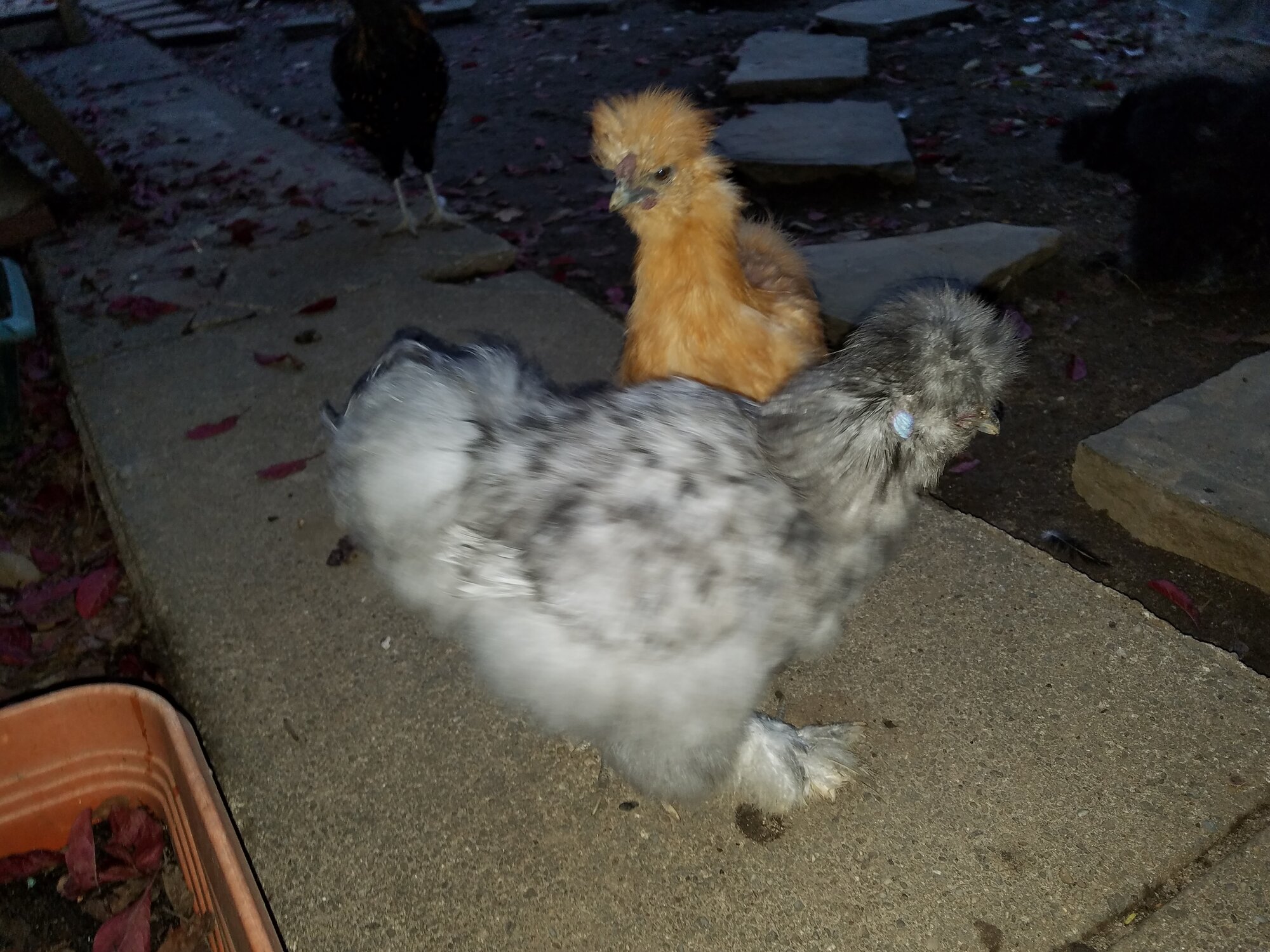 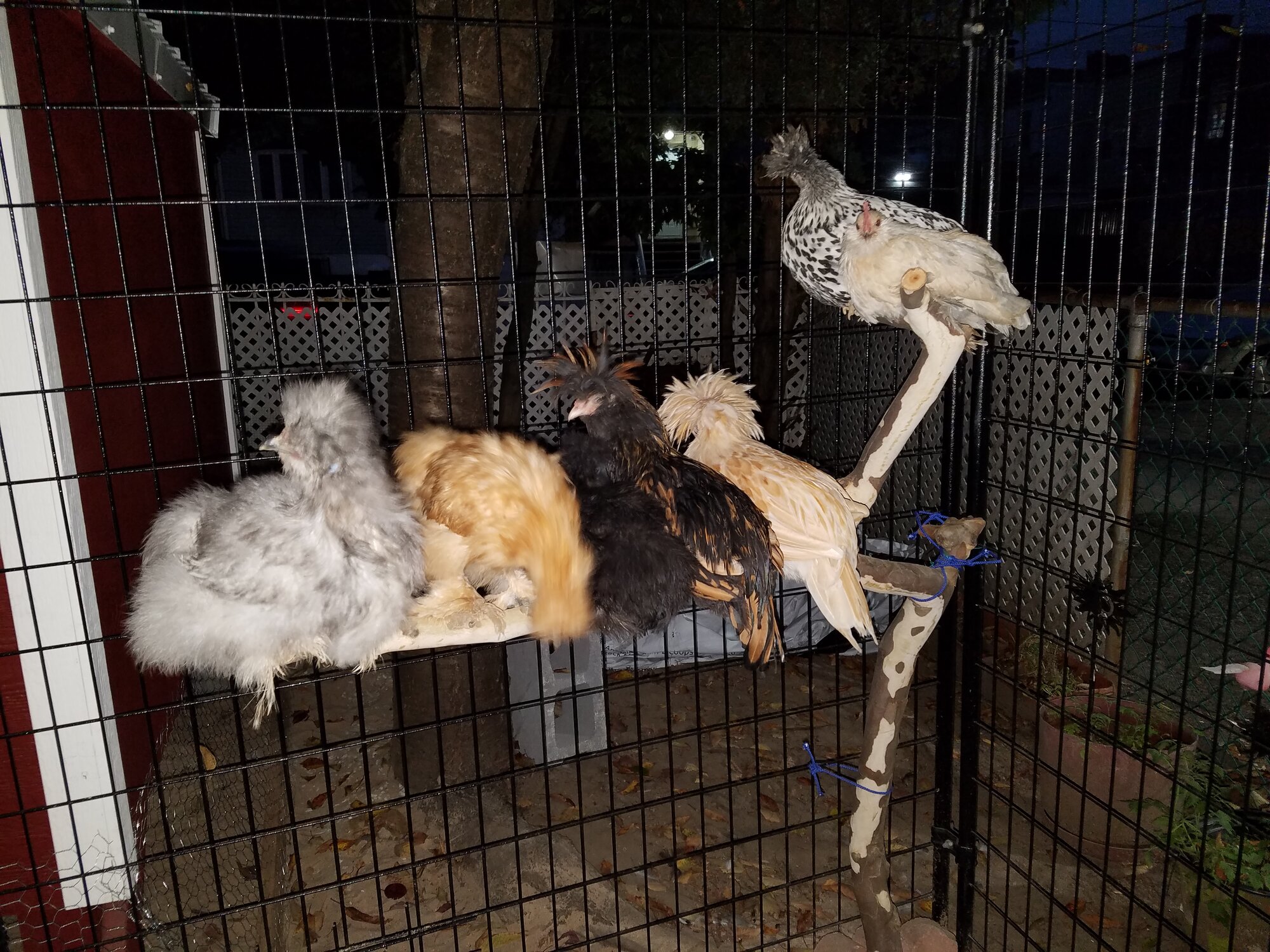 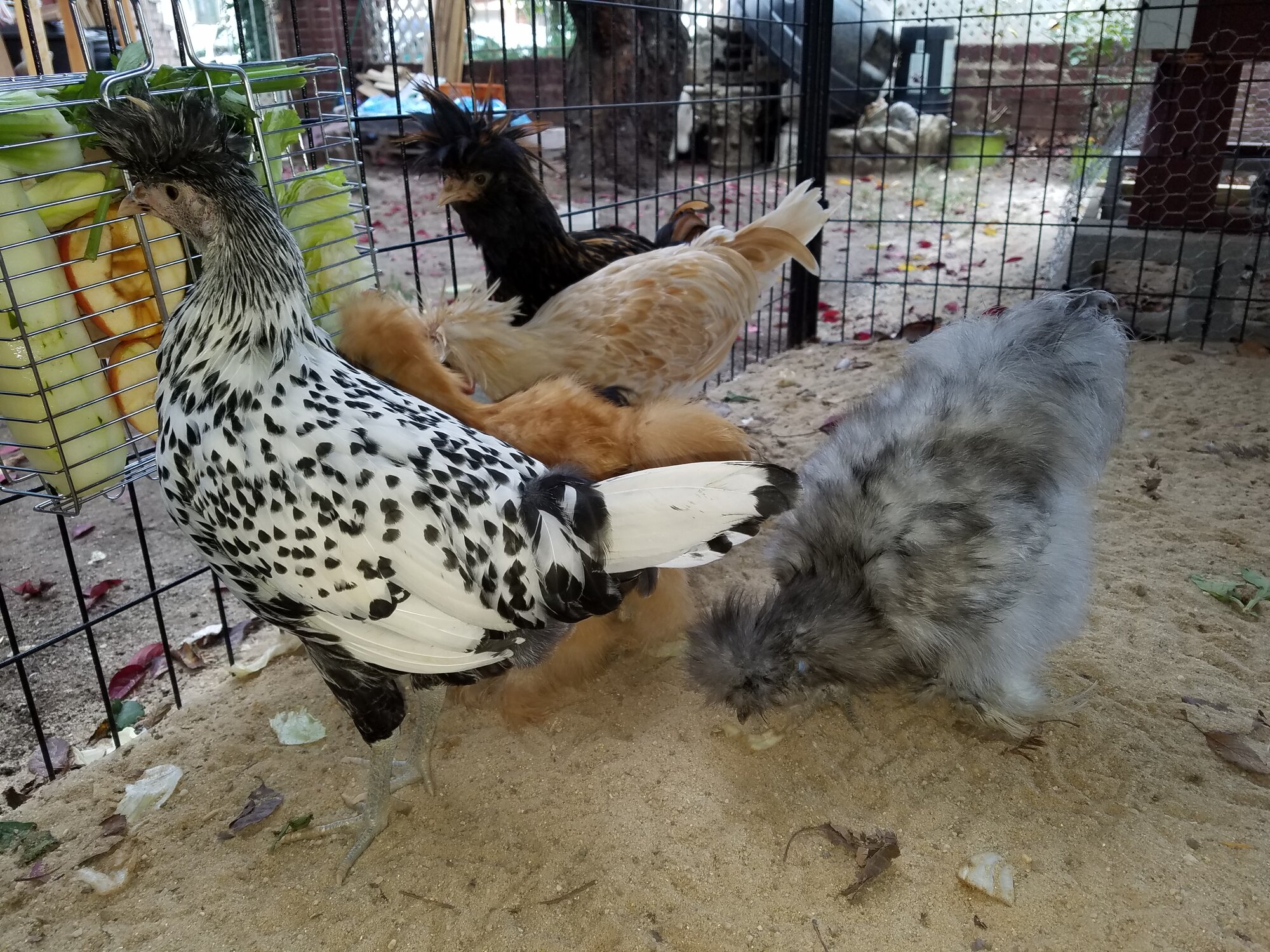