A few weeks ago I posted photos of our old shed I wanted to make our coop. Here's an update. (Aart - I did replace the roof, which provided a lot of ventilation - thanks for the nudge.).

Would love to see pics of the inside! Will you add mulch/rock over your apron, or will you let the grass grow up through it?

OH.. and will you add HC to the top of the run between the roof and the top board? Looks like theres a 6/8 in gap up there...

RobertaD1 said:
OH.. and will you add HC to the top of the run between the roof and the top board? Looks like theres a 6/8 in gap up there...
Click to expand...

Hey, RobertaD1 - I’ve used 6” garden staples for the apron, and there is HC on the top of the run.

Bodhisan said:
Hey, RobertaD1 - I’ve used 6” garden staples for the apron, and there is HC on the top of the run.

OK! Just couldn't see it! I figured you used the staples on the apron... (I love those things

) just being nosy as to if you would landscape it or just let the grass grow! Looks really good!!!

Looks good! The birds would probably love some outdoor roosts in the patio/screened in area (though like Roberta mentioned you would have to enclose the gap at the top).

Bodhisan said:
(Aart - I did replace the roof, which provided a lot of ventilation - thanks for the nudge.).
Click to expand...

Yes, lets see the inside!

On The Rolling Plains of Dixie

Nothing fancy - just the basics of ramp/roost/poopboard, ramp going to pop door.

The roost and dropping board are removable - sort of. I had to put a screw into the ramp to keep it steady to the roosting bar, but simple to take out (I don't use nails - ever.). 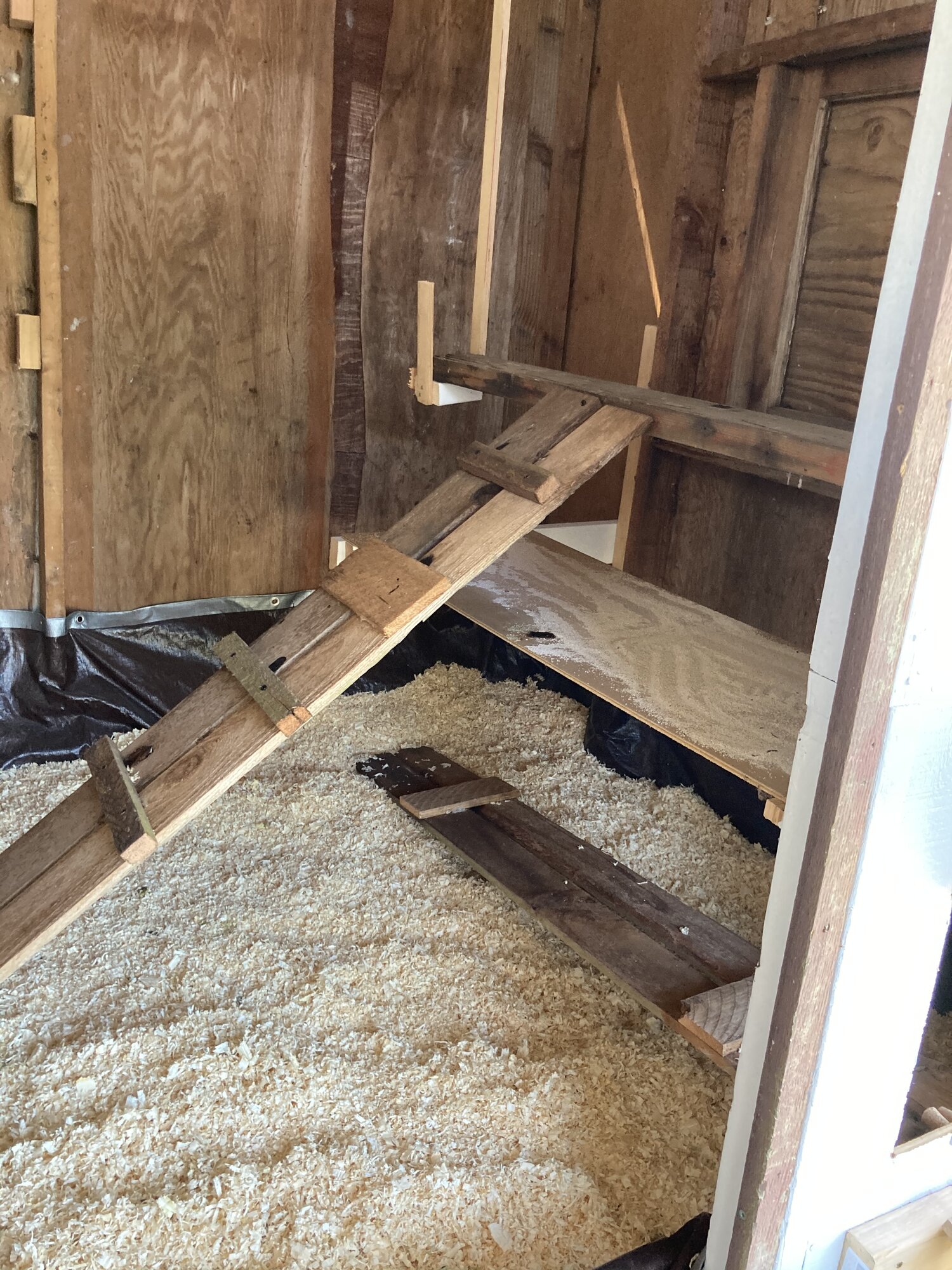 Ventilation goes all the around the top/all four sides - at an angle. 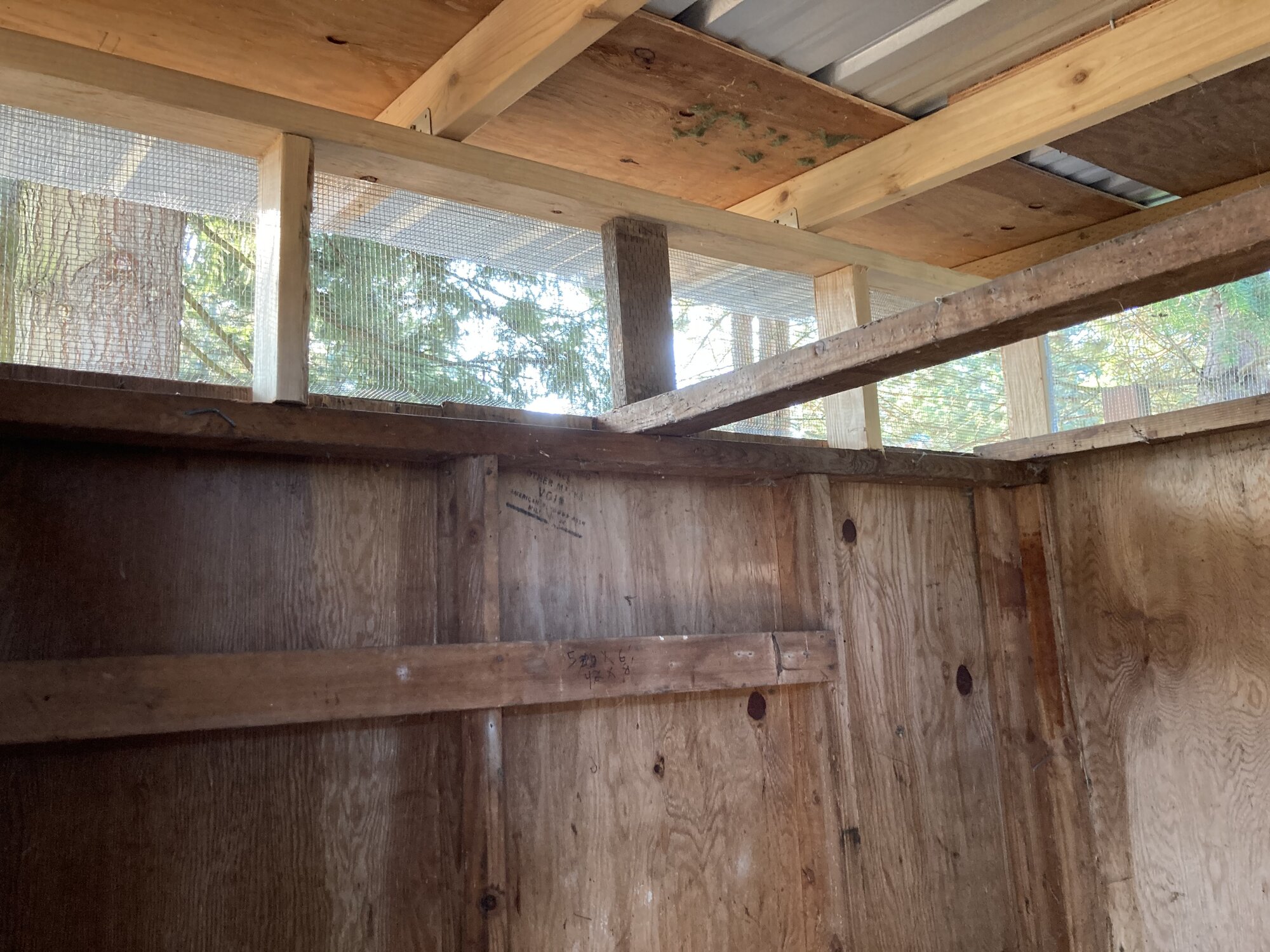 The small space between the 2x4 and siding is covered with HC. The shed had fallen, over the years since it was built in the late 60's/early 70's, to a slant, so it was really caddywampus to deal with. I had taken down the entire back wall to "re-do" it, and discovered the difficulty of working with such a fun-house room. 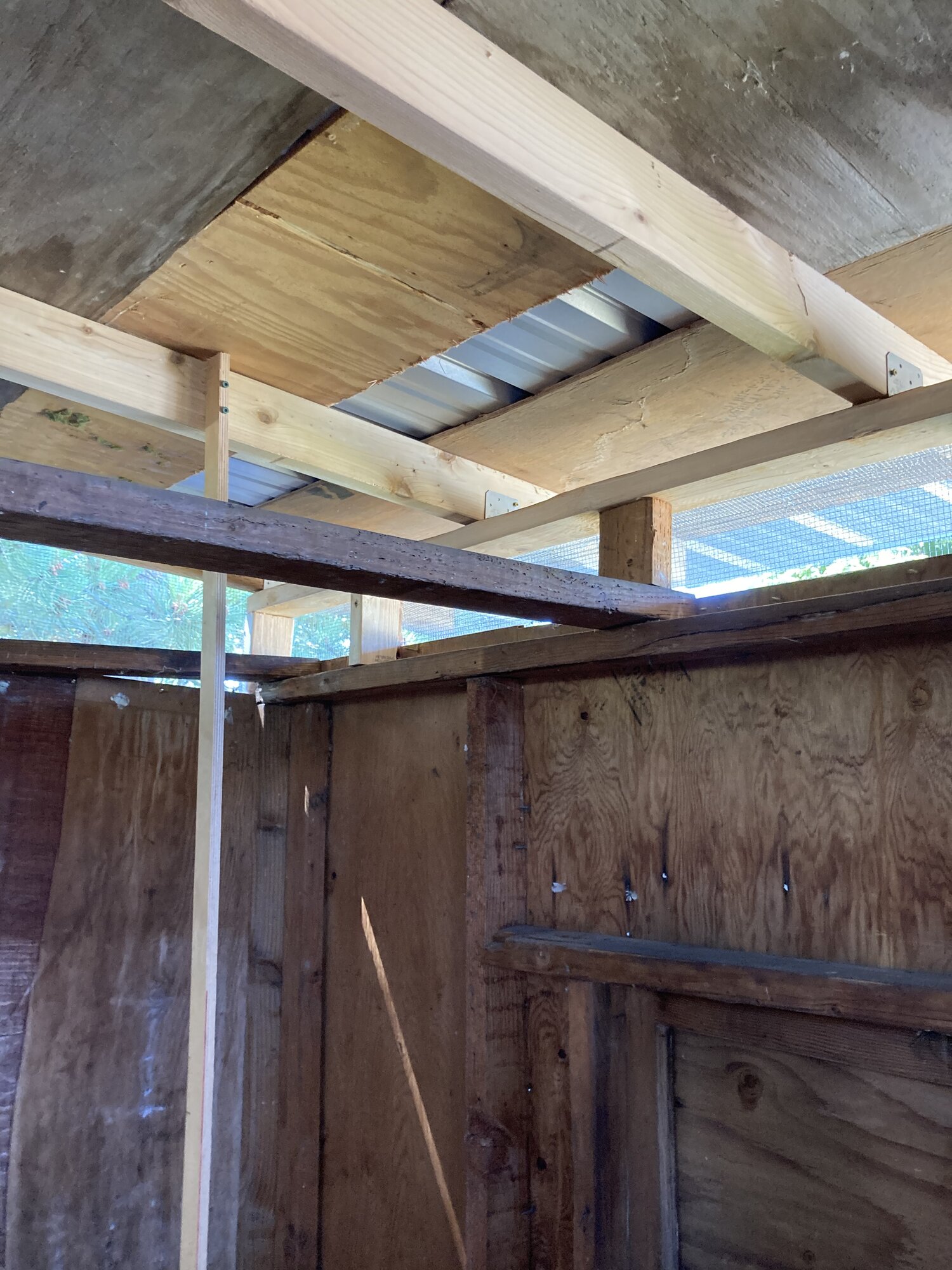 Door made from scrap fencing and 2x4s. The pop door is temporary until the Omlet arrives in a few weeks. 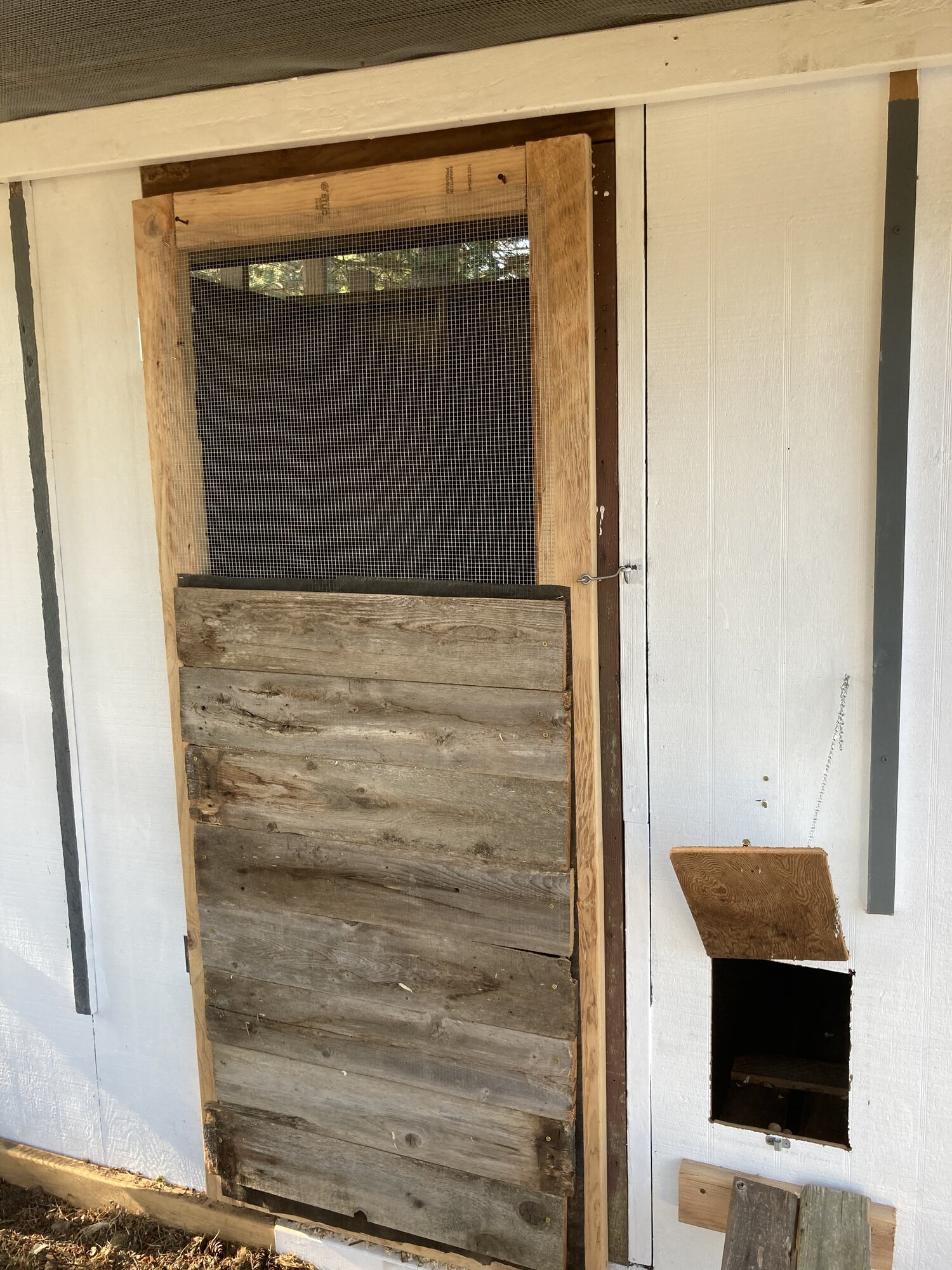 Another perspective of the venting. I just bought some cable staples and spaced them out on the perimeter skirt, but will do so, as well, all around the HC. Truly, though, I keep reading about how regular staples won't hold, but I just can't imagine that. I used 1/2" staples with a staple gun to stabilize the HC, and - gee, it just seems so solid. Anyway, I did also use screws (some with washers, but I got lazy (I've got horrible arthritis in my thumb joints), but I'll go around with the cable staples (u-nails). 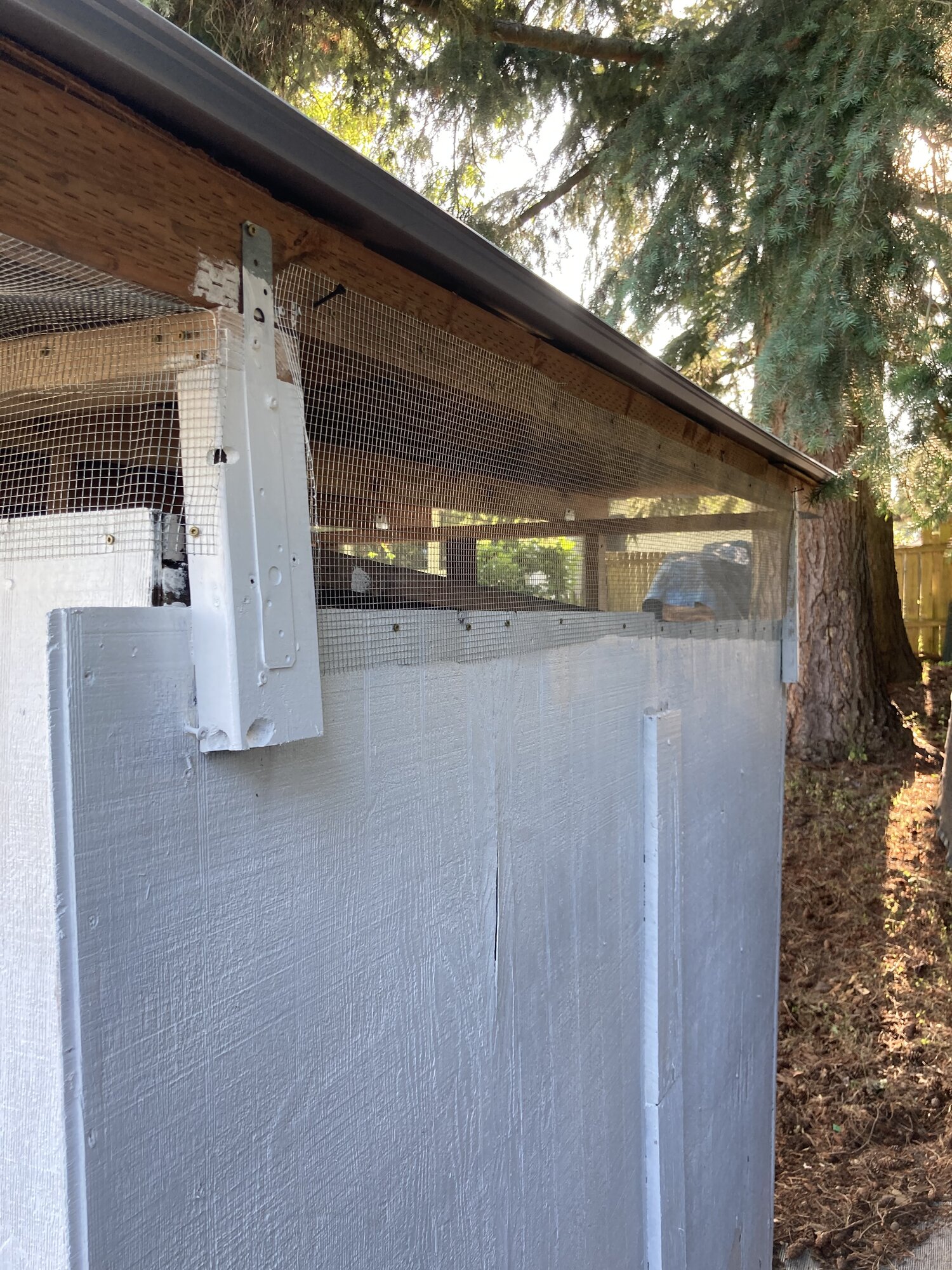 My nesting box opening is blocked with a shingle until they get closer to "that age" - and I have a ramp for it. After seeing a video on a "communal" nesting box that is shorter in height to discourage standing/pooping, I decided to go with that. The size of the box, if I remember correctly, is about 19" in length, 13" deep, and about 11" high. The big piece of wood to the left of the blocked nesting entrance is to close off the screened top of the human door in case temps drop into mid 20's or lower (and it's windy), as my roost is fairly high, and that could be quite drafty. The pine shavings are probably three inches deep now - I'm going to use the deep litter. I went with the tarp underneath just to try it out. My repair job to the floor was so screwy with an uneven surface of several 2x4 pieces, so having to clean in between all of those seemed like a nightmare. PLUS, I did a coating of Blackjack on the wood, and it was not drying beyond a stickiness, so that gave me doubly reason to put down the tarp. 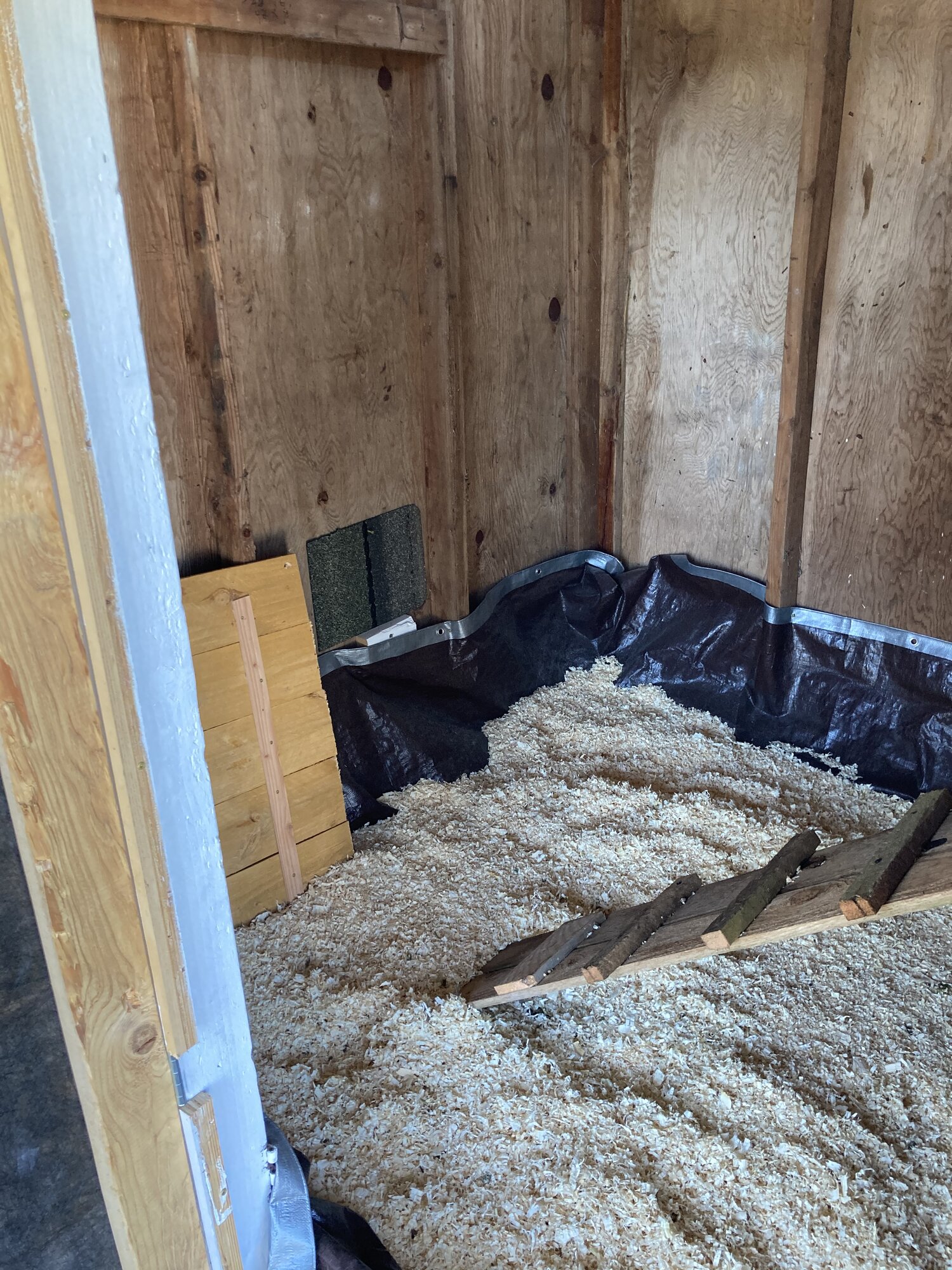 Obviously, I'm not a carpenter nor have I done a lot of woodworking, but I sure learned a lot from doing this. The only part I'm fearful of is how the roof is attached. I've got those four short 2x4's supporting the whole darn thing, albeit with four 3" screws in each, and I keep thinking a gusty wind of 60 mph, which we get once a year, could take it off - and I don't know if having that ventilation space will help or hinder that possibility. I'm going to also support/tie those boards down from the inside to the top frame horizontal 2x4s with support brackets.