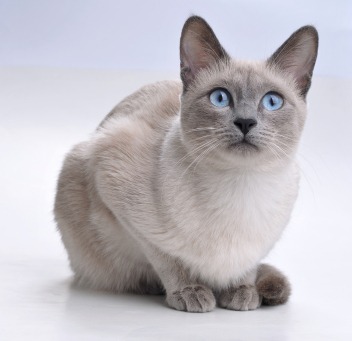 My Moogle is a chocolate tip. Shes a purebread, but her ear markings are DQ, so the breeder was going to dump her at the pound as a stray (we lived nextdoor to her back then, she took equally good care of her kids

). So I told her the boys would like a kitten.

The Chocolate points are my second favorite and choice if I were to get one of these guys. They're gorgeous, too.

I'm looking into breeders here in Northern, CA... I thought some prices for chickens were scary, but kittens! Most people want more than we paid for our Corgi!

You got lucky and so did your Moogle to find each other.

ETA: Since we promised not to breed him, we got him for cheaper.

That's the thing, most breeders want to send you home with your kitten being spayed/neutered. If I'm gonna pay 1000 bucks for a kitty I at least want to be able to make some return on my initial investment down the road if I choose to. They try to pawn it off as promoting responsible pet ownership but they're really just ensuring the future padding of their own pockets. IMO.

Quote:
And Moogle lets me know it daily, she actually sits on the bed and the moment a foot hits the floor shes mewing for breakfast, pick the foot back up she stops, back down starts again. The coffee pot's programmed to brew at 8, and she runs in to demand her brunch.

ETA: Since we promised not to breed him, we got him for cheaper.

That's the thing, most breeders want to send you home with your kitten being spayed/neutered. If I'm gonna pay 1000 bucks for a kitty I at least want to be able to make some return on my initial investment down the road if I choose to. They try to pawn it off as promoting responsible pet ownership but they're really just ensuring the future padding of their own pockets. IMO.

Yes the breeders will argue the spay/neuter deal. I am not against spaying and neutering but I am very against doing it to very young animals.

I don't like to buy animals without full registration even if I never breed them.I have bought Mastiffs for over 20 yrs. with full registration yet I have never bred any of them. I think if a Siamese goes for $1000 you should have full rights on it. A lot of breeders seem to want all the market.

What kind of registration does the kittens have that you are looking at?

We raised "traditional" Siamese for awhile. I had mostly seal points, but we did have a few blue points, a couple chocolate points, and a lilac point or two. Oddly seal points were the most popular and usually the first kittens to find homes. Breeding cats is a lot of trouble. Specifically keeping an intact male cat. It is rare to have an intact, actively breeding male who does not spray, and really hard to keeping a spraying male cat in the house. We had stud cages outside, so our boys ended up not really being pets at all. Not feral, but not particularly friendly either.

As far as prices go, I would rather buy Siamese than Sphynx. The breed I really wanted to raise. Those suckers are E-X-P-E-N-S-I-V-E. And I am not sure how we would work out keeping an intact male Sphynx in the house since there is no way they could live outside between the risk of sunburns in the summer and freezing in the winter.

I guess the other option would be to get a female with breeding rights and find a stud. We did occasionally stud out our male cats to other owners. Depending on the breeder, some will sell breeding rights for just a little more than standard kitten price. Though I can tell you, if you raise a litter correctly, you won't be making much profit towards recouping the cost of the initial kitty. Between all of the vet costs of preparing the kittens for their new homes (shots, wormings, health checks, etc.) and the prenatal care of momma (x-rays and sonograms to check the kittens progress as well as health testing before breeding her) it adds up very quickly. I would say we may have "made" $100-150 per kitten not including money spent on food and time off work to be there when momma was due to deliver. If for some reason we have to get momma to the vet for a c-section we lost money on the litter. That is with owning our male cats too of course. Outside studs typically run at about the cost of a kitten from the litter...or some people will trade for pick of the litter occasionally. When we did rarely use stud cats from other cattery's, cost usually ran between $500-750.

I would not say most (good) breeders sell their kittens with a spay/neuter contract do it so they can make money off you down the road...because there is not much money to be made. I know with the way we raised our cats I definitely could not make a living off it. I think the only people really MAKING money are the mill type breeders that do not put a lot of money into it.

Quote:
Yeah, now Otter Creek has just reminded me of a lot of reasons as to why I quit breeding cats.

Oh those stinky stud cats. Their urine is strong smelling stuff. I remember one time I feel in love with a Golden Persian.I wasn't a breeder then but the ppl held on to his papers. In a way they didn't want to let him go but I think because I would be a private owner rather than breeder they let me buy him.

They told me to let them know before I had him neutered.( I guess they hoped to still use him for a breeding.) Anyway everything was fine. The litter box was upstairs. He went up to pee and that strong stud cat pee smell beat him downstairs. I called them that night and told them he was to be neutered.

e expense. People can't imagine the expense of breeding cats correctly. So many vaccines,health testing,expensive food,litter ...how could I forget? Probably I'm blocking that part out as for the most part I couldn't get a fair price for my kittens.

I love Siamese cats and they are the love of my life and the only breed I will ever have.

Breeders around here are not cheap and harder to find a kitten of certain color. Sealpoints are the most popular color. I had both blue point and sealpoints. All females and after Bambi had her first litter of kittens when I was a freshman, hated the morning plays by the kittens, hated every bit of it so as soon as I could, I spayed Bambi and it was the best decision I've made. From then on every female kitten I got, I got them spayed as soon as I can or when the vet allows it. Some as early as 12 weeks and others was six months old (never again, she came into heat and I hated that yowling and spraying). Spaying ends it. They also make much happier pets.

All my cats were the traditional appleheads, despite of their mothers were wedge or bat eared faces and fathers were traditional apple heads. Only ONE I had talk like a Siamese which I love and the rest of them were quiet, non talkative. My Siamese right now, is 3/4 Siamese, from a private breeder whom her and I had some disagreements that her stud was NOT pure Siamese because of the tabby markings imprinting on the Siamese sealpoint colors. He was a lovely boy but her house stank. That is the reason why I do not want to breed nor have the time and money to invest breeding Siamese and the city is very very strict about people breeding their animals that you would need to be certified, licensed by the city to do that.

KatieKat, RIP, sudden death at the age of five, which we think she died of a heart attack, beautiful blue point

Cat hit his head on wall

Convincing a friend that her cat is to fat

WHO'S YOUR DADDY?Cat genetics question
2