I know that some of the coops featured here are very ornate and very clever, but I wanted a few simple coops and runs to isolate new chicks and hens until they were accepted by the bigger girls who have free range 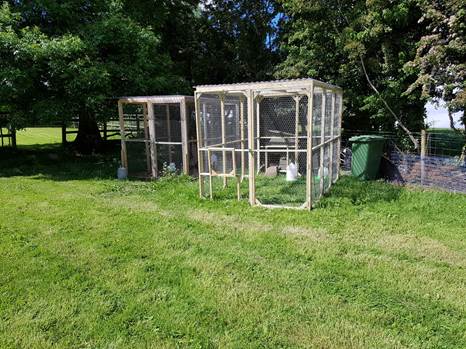 I only had 3 criteria.

I did make use of some power tools which I had at me disposal and this helped considerably to compensate for my lack of woodworking experience, but nothing too exotic.

The entire run consists of 13 identical sized frames and one door constructed from the 25mm x 50mm slating lath and covered with 25” chicken wire. Each frame is 95cm wide and 190cm tall.

The height is exactly twice the width so when assembled two frames wide a single frame will neatly span the width of the pen.

As it happens these lengths are also easily cut from the standard 4.8m lengths of slating lath with very little waste

Each frame is glued and screwed together on a homemade jig to ensure that they are perfectly square. To aid this I also included short 20cm 45deg braces in each corner although once the chicken wire is stapled on the frame is totally fixed. 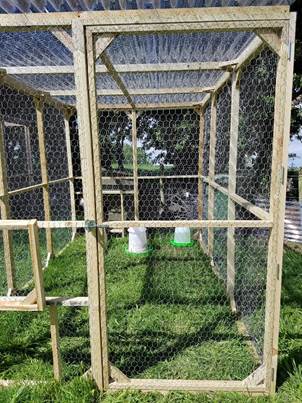 Constructing the frames is where the power tools are really useful. I used a chop / mitre saw to cut all the lengths of lath so all the lengths were identical and all the ends were cut square, makes squaring the frames that much easier. I also purchased a nail and staple gun from the local budget tool store. Nothing exotic, it will not be used on a daily basis so at £37 (About 45US$) it is sufficient for my needs. If you have never used an air-driven staple gun to affix chicken wire then please add to your bucket list. Sooo easy and sooo fast, and wired tight as a drum and 5000 staples are about 10 bucks.

The door is simply another slightly smaller frame but constructed in exactly same way. I allowed about 8 – 10 mm gap between the door frame and the standard sized frame into which it is fitted with 4 flush fitting hinges and secured with a simple gate catch


During construction you can decide on what size and position you require for access to the coop, assuming that like me you are going to mount it outside of the run.

Having carried your lightweight frames to their designated location it is simply a matter of screwing each to its neighbour with 3 screws, top bottom and middle. 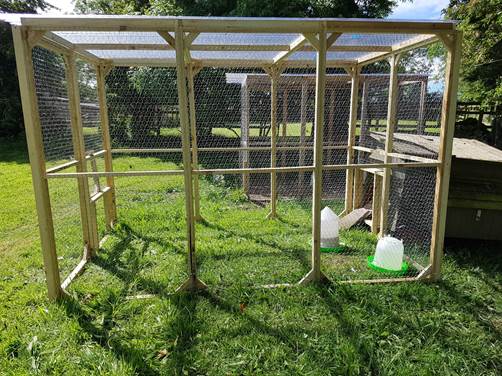 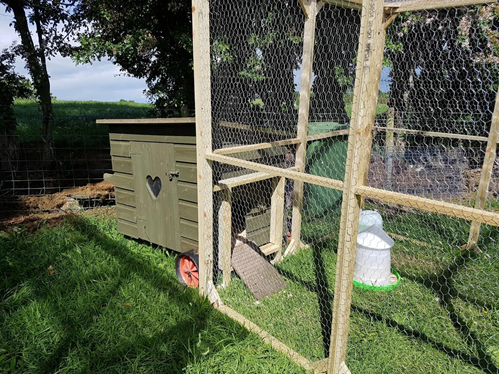 To finish off the assembly I fitted clear PVC corrugated sheets to the top to give some weather protection. These were actually the most expensive part of the whole run at £25 each, but so what, my girls deserve a bit of comfort.

I have built these run 2 frames wide by 3 long giving a floor area of about 60 sq foot, but there is no reason why more frames could not be added to create more space.

I usually hammer some small posts into the ground at each corner and screw the frame to these just to ensure it stays in place during a storm.

Going to try my hand at building a coop next so that may be another article.

Looks good. Due to predators I would need to have hardware cloth and add a skirting so the coons and possums have a harder time digging under. Mine is going to be simple as well. Will have to think about a staple gun.

How to fix a measuring mistake
2