Spots on eggs in frig

I occasionally sell extra eggs that I collect from the girls. I usually don't wash the eggs until the hour before I am giving them out but they are refrigerated from the moment I collect them. None of my eggs that are sold are more than a month old... Most are a week or two old but have been kept fresh in the fridge.

The past couple of months I've noticed some dark spots that occur on the bottom of the egg? Anyone know what these might be? Is it from being refrigerated?

Just extra pigment if they're like that when you gather them, or condensation if you wash them and store them in foam cartons.

nuthatched said:
Just extra pigment if they're like that when you gather them, or condensation if you wash them and store them in foam cartons.
Click to expand...

That's the thing.... I don't think it was like that when I collected them. And I do not wash the eggs until an hour before I give them out (to preserve the bloom) so it is not related to the washing process because that's when I am finding it is when I go to wash the egg.

TJAnonymous said:
That's the thing.... I don't think it was like that when I collected them. And I do not wash the eggs until an hour before I give them out (to preserve the bloom) so it is not related to the washing process because that's when I am finding it is when I go to wash the egg.
Click to expand...

Maybe it's not noticeable until they're washed? I don't know.

Start looking more closely, I'd bet it was there from the get go.

Heck, if I don't get spots on my brown eggs I'm disappointed. I still like getting a dark speckled brown egg from the ISA Brown pullets. Makes those eggs seem special and exotic to me.

So I'm doing more research on other sites to see if I can figure out WHY these spots are appearing occasionally on the bottom of my eggs.

In the process of searching, I came across this incredibly informative article which discusses the "blood spots" or speckling that appears on some eggs. This isn't the "spots" that I am researching but I found it interesting, nonetheless.

As a layer flock ages the quality of their eggshells decline and the percentage of cracks increases. Also, the relative number of eggs with heavily spotted shells increases with age of a layer flock. Research has shown that as the hen ages the egg gets bigger and the shell becomes thinner. Simply, the size of the egg increases and the amount of shell deposition remains somewhat constant and, therefore, the shell thins. The calcite columns in the palisade layer of the shell become shorter with hen age and research in eggshell quality has shown that fracture strength of the eggshell is directly related to the thickness of the palisade layer. In older flocks, the combination of increased spotting and thinner shells has a cumulative negative effect on egg breakage as well as moisture loss. The increased moisture loss has a negative effect on hatchability.

Egg hatchability can be decreased by 3 percent to 14 percent when spotting of the eggshell is high, especially in older breeder flocks. The decline in eggshell quality in older flocks is also highly correlated with an increased bacterial penetration of the eggshell. Minimizing the number of stressors and their intensity in the environment of commercial egg-type hens and breeders will keep the stress level low in the birds and this is usually associated with a decrease in the amount of eggshell spotting/mottling, especially in older flocks.
Click to expand...

I wonder if my situation is falling under "uneven pigmentation"? I will watch more closely to see if this is present at collection but right now I feel like this only seems to show up randomly after I've removed them from fridge to wash the eggs.

Hmm, I get eggs like that on occasion. They cooked and tasted just fine so never thought anything of them.

Is this the one you are concerned about? 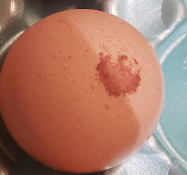 Is the shell there thinner and/or rougher than the rest of shell?
There are quite a few shell oddities than pose no harm to the egg as far as edibility.

K
Eggs and the frig

K
Eggs and the frig