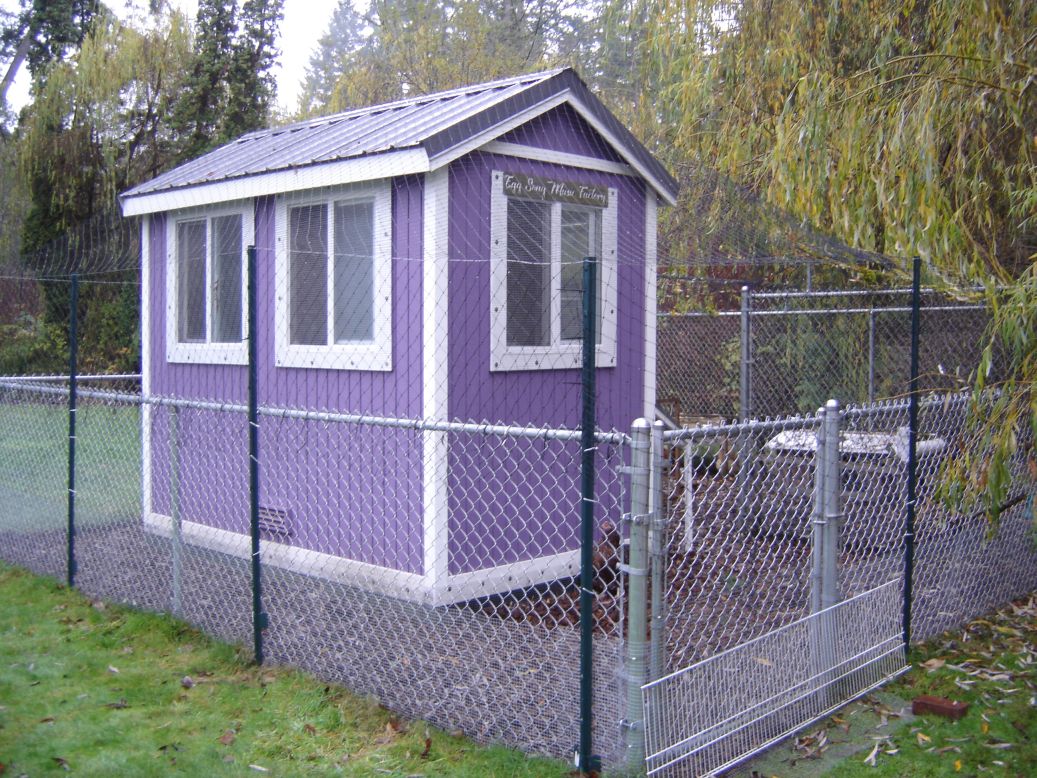 Welcome to my coop!

​
Like many first time chicken owners we started off with a little box of chicks and a prefab coop. Two years later we were ready to expand both the flock and the coop. We're up to 3 hens and 4 pullets at the moment! 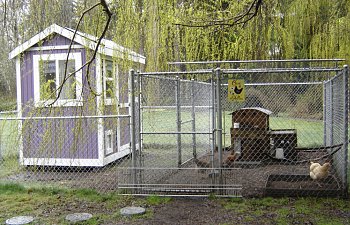 I hired a local shed company to build a 6' x 10' shed. Actual interior measurements are 5.5' x 9.5' (approximately 48 sq ft not including nest box) so this coop can hold up to 12 standard hens. The coop sits inside a split run measuring approximately 20' x 25' (440 sq ft not including coop) overall. It sits elevated 6" on concrete blocks to deal with rain and to deter rodents from tunneling inside. The entire base is surrounded with 1/2" hardware cloth, tucked under the coop footprint and secured by lawn staples, stainless steel screws and fender washers. 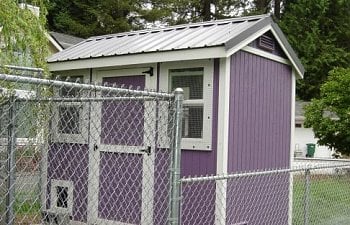 Since it's hard to get a good photo of this, below is an illustration of how the interior is laid out, roughly to scale. Aqua = windows, grey = roost and nest box, pink = pop door under the window. 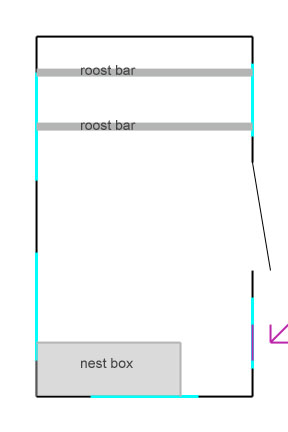 After reading other recommendations on BYC, I went with two coats of Black Jack #57 on the floor and up a foot or two on all the studs (the walls are covered in Tyvek so no need to coat). I also put Black Jack on the inside of the door and on the support legs of the roost and nest boxes. Bedding is currently wood chips. I use a 1x4 held in place with bricks as a kickboard to keep beddings from flying out the door.

I installed an automatic door by ChickenGuard which opens and closes by timer. I'm a late riser so now the chickens don't have to wait for me to wake up, and as we're often busy towards the end of the day, this means we don't have to rush out at dusk to lock up either. I chose to install the auto door internally so that weather will never be a concern. With the pop door 16" above ground level we put in cinder blocks for steps, as we get a lot of rain (I didn't want a slippery wood ramp) plus we have limited space in front of the coop, so steps make more sense. The chickens (even 4-week-old chicks) have no problem using 8" tall steps. 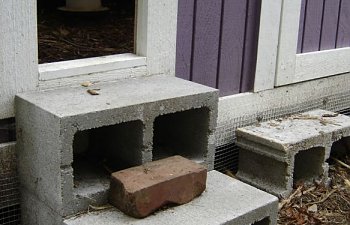 The coop has approximately 32 sq ft of ventilation, not including either human or pop doors. There's 5 windows, 1 gable vent, 2 floor vents, 40 under eave vent holes front and back, and a ridge vent. Recommended ventilation for a build this size would be 12 sq ft (a minimum of 1 sq ft per bird OR 10% of floor space, whichever is greater) so I went well over. For extra security the windows are all covered in 1/2" hardware cloth with stainless steel screws and fender washers.

The roost is made from 2x3's with fence brackets for securing branches. The branches can be removed during cleaning, by simply unscrewing the raised section of the bracket. The roost sits across the south side of the coop, the only side without a window, as that faces the direction of prevailing winds on my lot. The top roost sits 14" from the back wall, the lower roost another 18" further down, sloped at a 45 degree angle.

The nest box is made from 3/4" plywood plus a few bits of scrap wood. Each bay measures approximately 14.5" x 14.5" x 14.5" rising to 24" in the back, so the top slopes to prevent chickens from roosting on it. The top is hinged to the wall so it can be opened for easy egg gathering, cleaning or broody removal, and I've also added a hook and latch so the top can be propped open. For nest padding I put a folded feed bag in each box, with wood shavings on top. 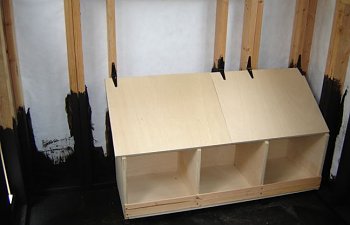 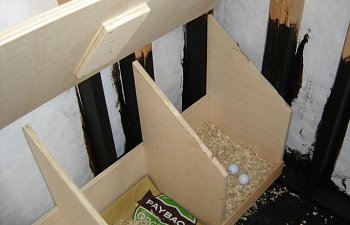 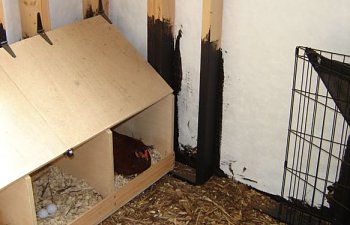 The chain link run measures approximately 15' x 20' x 4' tall on one side and 10' x 20' x 6' tall on the other. There's approximately 18" of 1/2" hardware cloth at the base of the fencing, secured with hog rings and both UV resistant and stainless steel zip ties, and 18" aproned out and secured with lawn staples. Over the top we have 2" heavy duty nylon bird netting which lets snow and leaves fall through but provides coverage against birds of prey.

Here is how the enclosure looks once netting was installed over the entire run. On the sides with 4' fencing, we added several 6' tall U-posts, set them into the ground with a mallet, then wired them to the existing fencing. I ran tension wire near the top of the posts to give the netting more of a frame to rest on. On the sides with 6' fencing there's a pair of support bars across the top to prevent sagging and give a little more headroom. 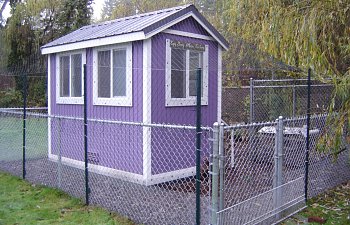 The run has a lot of obstacles in it, including the brooder, a watering station, a covered feed station, a jungle gym, and a raised dust bath. As we were integrating chicks this gives them a lot of options to get out of line of sight of the adults while still keeping ample open space for all the chickens to dig around in, lounge about on, and explore. Even with the chicks now "grown up" they still appreciate having hiding spots when another bird gets cranky with them. More information about my outdoor brooder setup and early chick integration here! 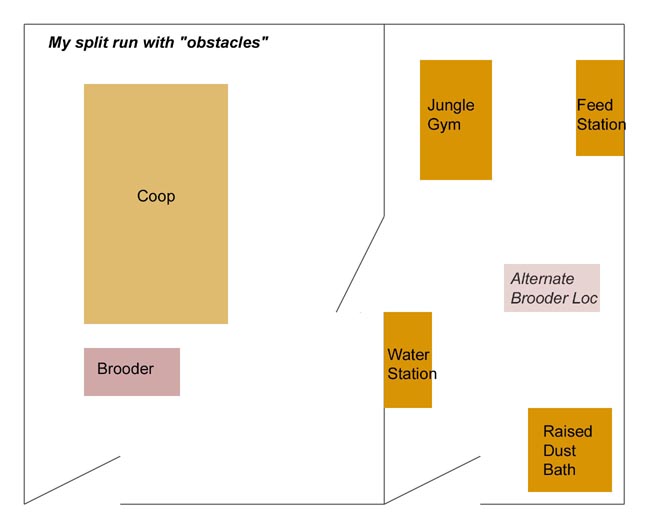 I highly recommend a split run. It's very convenient if you're ever planning on integrating chickens, or even if you just want to keep the chickens out of the way while doing cleaning or maintenance work. Originally I had some garden beds plus an occasional use chicken pasture in the larger run (hence the fence height), but with the new coop in place I now free range with supervision if I want the chickens to have some forage.

​
Here's a few more things I added, both for function and for fun!

A coop nameplate. My husband named the coop (originally it was E&S Music Factory, a spoof on the pop group C&C Music Factory). But the only music we're producing is the egg song! 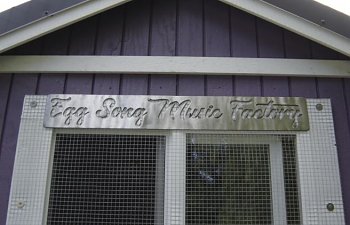 Shelving for extra feed, treats, grit and oyster shell. Yes, I eat a lot of gelato... 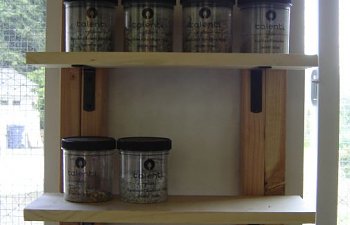 My husband is a big fan of the Silent Hill video game franchise. Here's the pop door "art", and the reference photo. I might try redoing it later with some newspaper, to make it look more like the original.: 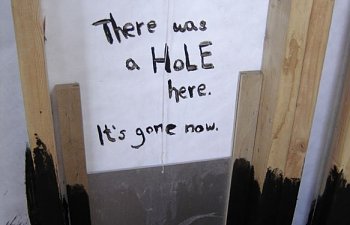 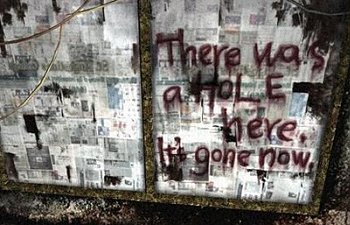 Nameplates for each hen, which hang above the roost. I was going to buy ones off etsy but why buy when I'm capable of applying paint to wood? 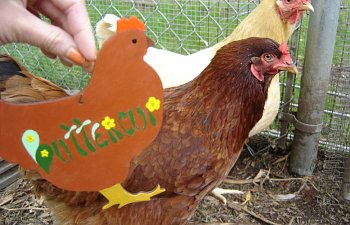 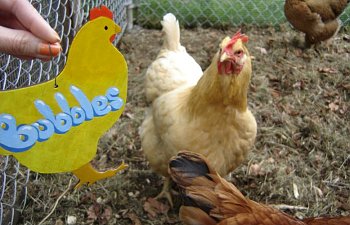 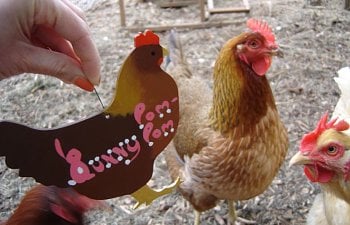 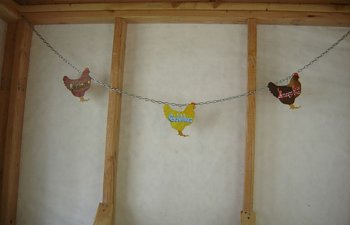 An awning for the pop door. Turned out that while the rest of the coop handled rain and winds just fine, the pop door was positioned in such a way that rain was blowing in at times. I built this awning out of a polycarbonate roof panel set on a 45 degree angle and some 2" x 2" wood. It's not quite square but it does the job and doesn't budge even during heavy windstorms. 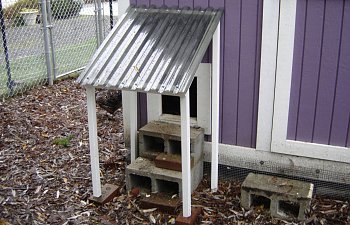 A pair of battery operated puck lights. They're mainly there to provide light so I can poop scoop under the roost area on overcast days.

A Ring Stick Up Cam security camera which was my Christmas gift to my husband, as he was going in the coop every night, rain or snow, to make sure all the chickens were in and up on the roosts. Now he can check in on them and have peace of mind, all from the comfort of his computer. As we don't have electricity or cables run to the coop the camera operates on battery and wi-fi. 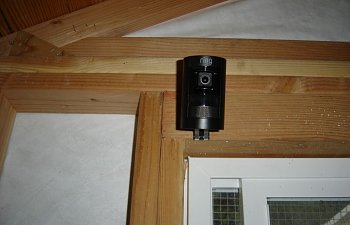 It's not part of the coop, but I can't help but grin at our "upgraded" dirt bath. Someone across the street put out a Little Tikes turtle for the taking, so I nabbed it, blasted it clean with a hose (I know they don't have chickens so was just getting some cobwebs off), and filled it with peat moss. It's a huge improvement having a dust bath that's waterproof and covered, given how much rain we get. The chickens immediately congregate around it every time we open it up. 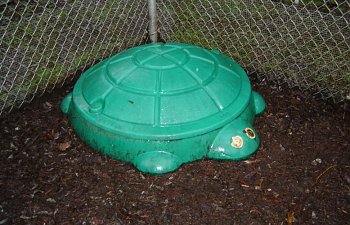 Thanks to BYCer LuckyCluckyCA for this LOVE tin sign! Makes me want to go out and find more signs to add to the coop. 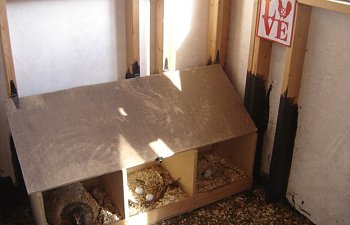 Thank you for the comment on my thread, and this educates me aswell! Thanks!
Great info in the article. Lucky chickens!
Reactions: analyticalblonde and Cryss
Read more…

that is a very nice coop ,but for me I have to say that chain link fence would have to go, I guess that is because I am more in to free range chicken, I feel that the more room a chicken has to range around the happier they are ,but again that is just me.
job well done it really does look good

boz said:
that is a very nice coop ,but for me I have to say that chain link fence would have to go, I guess that is because I am more in to free range chicken, I feel that the more room a chicken has to range around the happier they are ,but again that is just me.
job well done it really does look good
Click to expand...

I don't free range without supervision as we have everything from stray dogs, coyotes, coons, hawks, owls, eagles. On days when I do let the chickens out they almost always head back to the run on their own after an hour or so, they're very comfy in there.
Very well thought out design. Excellent job.
Nice job!
Love the name plates!

Awesome!!!
Beautiful!
I love the thoughts of integrating chicks at a young age out there too. You sound like a fantastic chicken keeper!
Awesome!!
I love the name plates! Where did you find the wooden hen cut-outs?

FlyWheel said:
I love the name plates! Where did you find the wooden hen cut-outs?
Click to expand...

FlyWheel said:
I love the name plates! Where did you find the wooden hen cut-outs?
Click to expand...

Thank you so much.
Hi, I’m pretty new to all of this and I’m wondering what a dirt bath is? Also, do ducks need one?

Duck_lover3 said:
Hi, I’m pretty new to all of this and I’m wondering what a dirt bath is? Also, do ducks need one?
Click to expand...

A dirt bath is just a pit of dirt that chickens roll around in to cleanse themselves of debris and parasites, as chickens don't bathe in water.

I don't have ducks (well, no domesticated ones) so you'd have to ask on the Duck subforum about that. Since they're waterfowl I imagine they don't need it.
Such a cute coop! Love the sandbox idea for the dust bath
There are lots of aspects I like about your design. Love the automatic door and the repurposed sand box!!
You must log in or register to reply here.