Tell me a bit about your set up when you butcher, please.

We did our first butcher (mostly extra roos) this past weekend and it took 6 people 4 hours to do 14 chickens. I doubt that's good! LOL! First of all, there were only two who knew how to process-- we got a guy and his dad to come out and help us, and teach us-- in return, he got 1/3 of the processed birds.

One problem, right off the bat, we didn't have the pot out to boil the water til they got there--nor the table set up or butchering knives. I was a bit surprised the guy who came to help didn't bring his own knives. But eventually we got a bit of a system down. My son brought the birds over, the guy slit the chickens' throats, hung them to bleed out, his dad and I had chairs and we started pulling feathers, and then handed off the plucked chicken. Then the guy cleaned them. Eventually, hubby and neighbor, (who co-owns the chickens), started trying to do some of the steps. (I had a bit of a harder time with the throat-slitting, because he (my hubby) sawed and stabbed a few times before he got it right-- those chickens suffered. I think I'm going to have to learn, because it didn't matter to him, but it does to me)


Anyway, we're eventually going to be doing 50 birds, and I think our lay-out and set up made things not go as fast as they could have. And the flies were obnoxious! LOts of blood and guts on the "chopping block". (He stretched the birds out on a block of wood, slit their throats and then chopped the heads off immediately), then they were hung to bleed out--another spot for the blood to just run onto the ground, drawing flies. Then there was the butchering table, at least there he had several buckets--one to dip the knife-- and his hands, to clean them up every once in awhile, one that had bags to hold the various organ meat we wanted to keep, and one for the stuff we didn't want. Then a hose to wash out the carcasses after they were cleaned out.

So is this a "normal" type set up? Should we be catching the draining blood in a bucket so as to be able to bury it in the hole we dug for the guts? We're going to try to get a few more helpers when we do the 50 birds, and have two "cleaning tables". And i personally would like the birds put into killing cones. I'm the only female in the crowd, so they may not let me do that.


I would like to hear how some of you "seasoned processors" set things up, is there a quicker system? What kind of knives do you have--I don't think we had that good of knives. Any other pointers you can suggest?

I haven't processed birds, but am watching with keen interest one of my friends' projects, a Cornish Cross growout which will end up with around 180 birds being "processed" in two weeks' time. She and a group of likeminded friends and neighbors went in on the birds together and they have set up a part of the garage to do the processing in. Their setup is based on that of a local German Baptist farmer, who is well known around here for the several crops of pasture raised broilers that he raises each summer and sells at the farmer's market... he also lets people use his facility for a nominal fee and shows them what to do.

They have set up some killing cones, these are homemade ones constructed economocally of what looks to me like aluminum flashing... I am told that they are easy to make yourself from a pattern. I was probably told but can't remember where the pattern came from. Could be it was one of Robert Plamondin's books, could be from the internet. Anyway, cones and buckets ought to help with the random pools of blood problem.

They also pooled resources, and constructed one of those do-it-yourself whizbang chicken pluckers, and tested it on some Muscovies (it did a fair job) and I think on Guineas as well.

Finally, I am told that food should be withheld for 1 day before the time of butchering. (They can have plenty of water though). This allows the intestines and stuff to clear out and makes the work a lot less messy.

Fingers are crossed for the eventual day of reckoning, as no-one involved is an old hand...

Now, here's a thought: apparently you can save the blood and use it in cooking. Either in sausage making, or in some Asian cuisines. Hmmm. 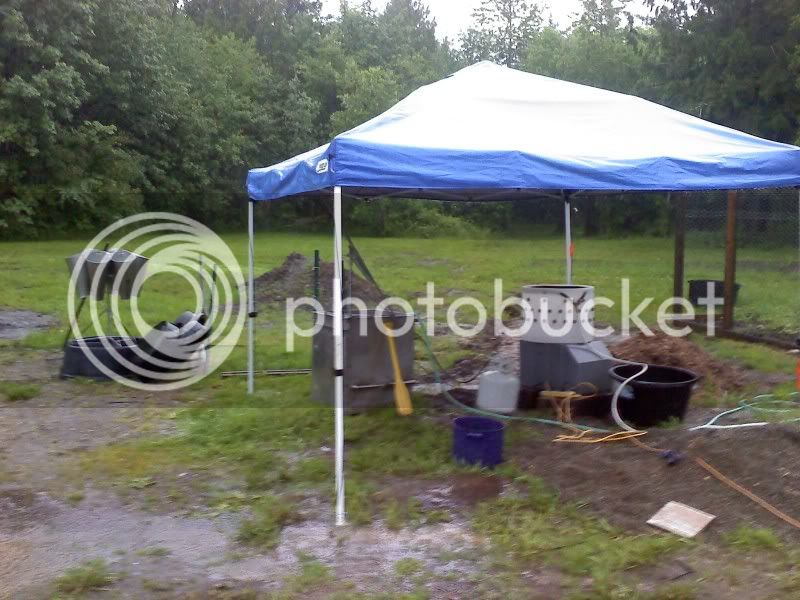 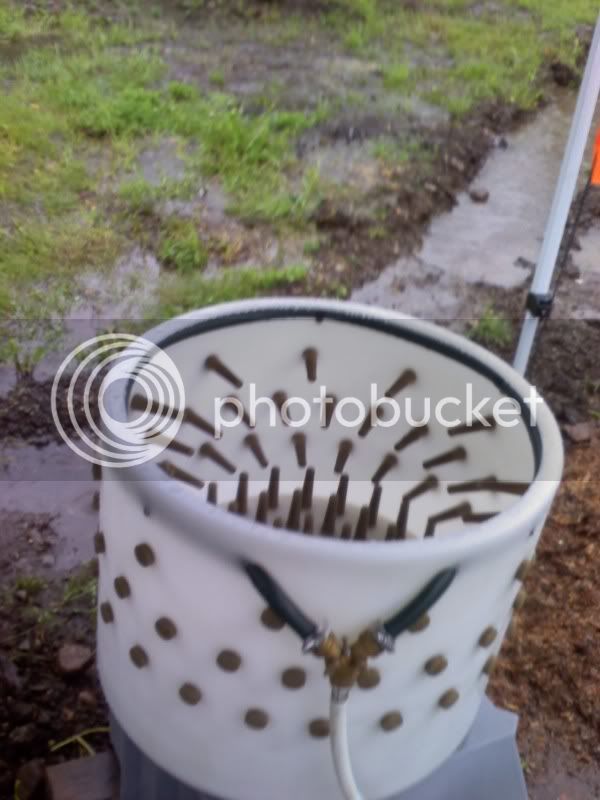 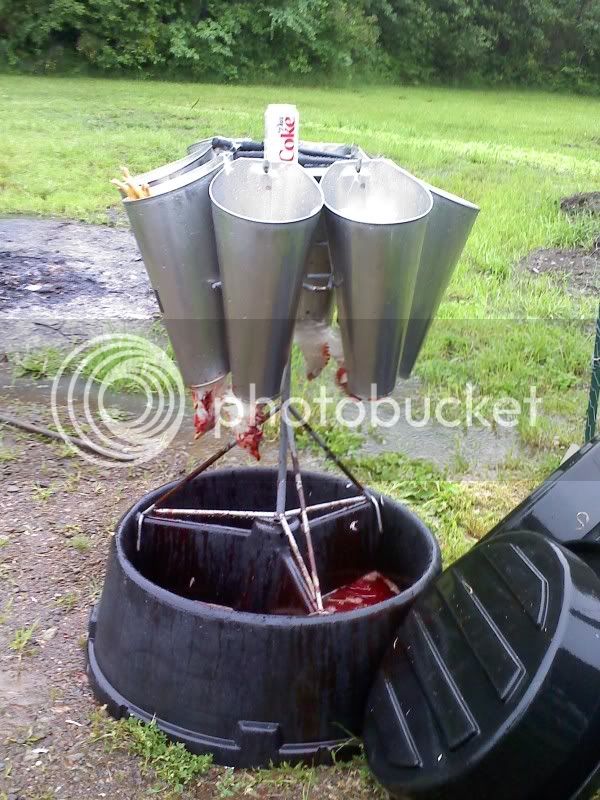 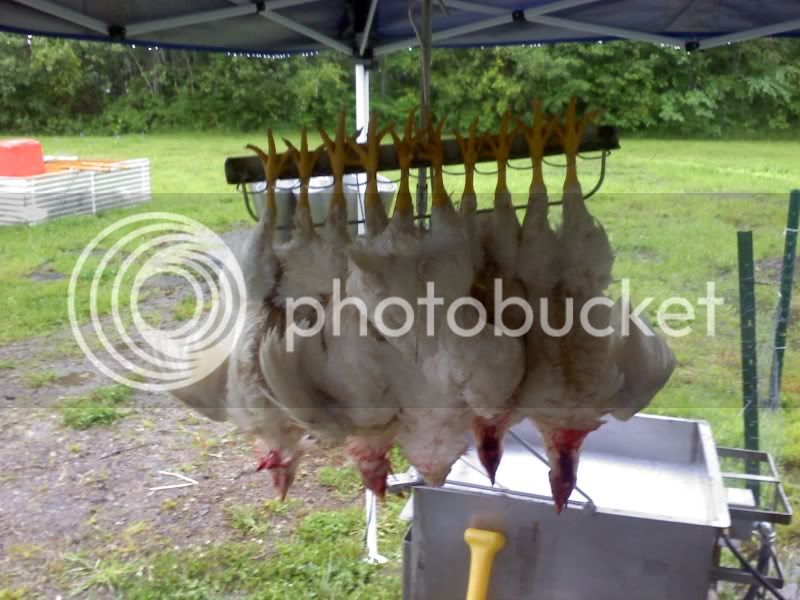 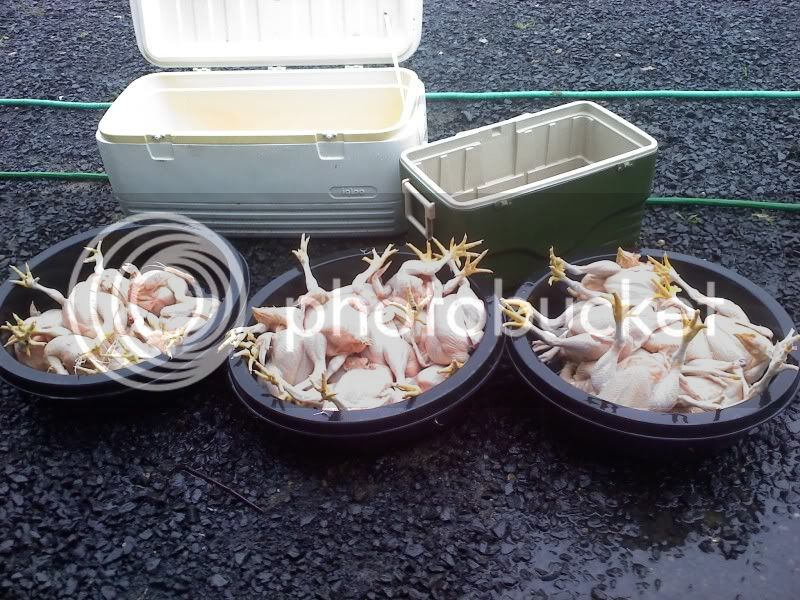 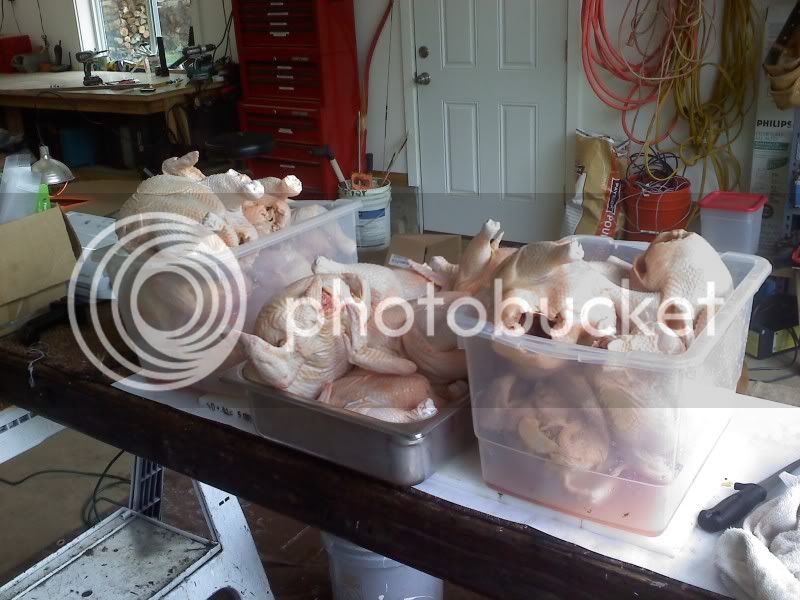 I'd say whatever set-up works for you is normal. I only process a few at a time so I'm not sure if my method will work for you but here goes....
I go out about 04:00 before the flies/wasps are out and the birds are still sleeping, I hang one at a time up by the feet and slit the throat to dispatch/drain.
I take him down before I go get the next one, that's not strickly necessary but it's important to me that the last thing my cockerals see is NOT their dead friend hanging next to them...I know I'm kinda a sissy about it-I still cry too thank you very much.
Since I usually don't leave the skin on when I cook them I don't even bother plucking-I just skin them. I'll pluck only if want one for roasting.
After skinning, the head,feet, and last section of the wings are cut off with bone shears you can pick up at a sporting good store in the hunting section.
At this point I bring them inside the kitchen, I remove the breast meat, legs, and wings then bags them. I remove the neck and toss it in the waiting stock pot. Finally, I take my bone shears and cut through the ribs close to the backbone-follow the path of least resistance here. Then the carcass opens like it's on a hinge and you pick out the liver, gizzard, whatever you want and slide the rest in the trash. Rinse it off and into stock pot it goes.

Thanks for sharing everyone as I would love to get some meat chcickens...but would only need to clean a few at a time. I seen someone else use the cones to stick the chicken in then cut. I like that idea...versus the lop the head off on a wood table (or as my grandfather use to do) use an old stump then throw the chickens and tell us kids to chase them... how creepy.

I would definitly contain the blood as you can bury it near your compost or dump it deep into your compost and bury well. I would not use it for cooking/eating...yuck

Thank you all for sharing what works for you. I've read that a lot of people clean the birds innards out after they bring them inside-- I LIKE that! Air conditioning, here I come! LOL! I especially like the suggestion form you, infernoflower, about cutting through the ribs near the backbone to get to the innards--much easier sounding.

The pictures are helpful, Dogfish, thanks.

exop, that sounds like a great set up--especially with all the help! LOL!

MyChickenWishList, when I was a kid we lived on a farm, and my parents did the chop the head, let the chicken flop-- it IS creepy.

I hang them to cut their throat, and put them in a bucket to bleed out. I also do all my cleaning/cutting etc indoors - I like the comforts of home, and when I was picking up roos through the winter to process, there is no way I would be outside in a blizzard processing!

Here's my blog on how I do it

Booker81 that was an exceptional blog!! Thank you so much for sharing that!! Photos and all...I love it. Was very clear pictures and so easy to understand instructions. You not only did a great job on blogging it but the chicken looked great too..

I will definitly be marking your blog in my favs for future reference.
Again..THANKS

Quote:
that's because you don't have experience on butchering. you will get faster. i'm working alone and i butcher 8 birds (chickens, turkeys or ducks) in 5 hours. and i pluck by hand.

We did 5 Roos yesterday, we are far from experienced. A couple months ago I did 8 old hens, but we skinned them. So yesterday was our first real go.

It was just hubby and I.

I got home from work at 4:45. He was was washing out the scalding pot and tubs with bleach and water.

We had everything set up by 5:20. One table for plucking, one for butchering. Killing cone in the tree line, 50 or so feet away. A turkey cooker for scaliding water, a tub for pre butcher dunking, and an ice bath for the finished chickens. A bucket for peices, an ice water bath for hearts & livers, a bucket for bleach water, and a hose for spraying off the chickens before we scalded them (pretty muddy here.)

By 7:00 we were done with all five. Then clean up took anouther 15 minutes or so.

The fastest bird took less then 15 minutes, getting the scalding water the right temp is important.

I killed, helped pluck, and gutted. Hubby kept everything clean, manned the scalding water, helped pluck, and pulled any residual pin feathers when I was done. It seemed to be a good distribution of labor. Now that I feel more comfortable with my speed, I might next time, let hubby pluck when I go dispach anouther and let it bleed out when I gut. Then there will be less waiting and we could probably do 10 minutes or less a bird.

Oh and sharper knifes. I need me some good knifes!