The Beginning of my chicken story

My story begins awhile back at a fleet store, like so many others. I would always go look at the baby chicks, of course, and daydream about a life of self-sufficiency and beautiful land. I went one day with my brother and my partner and we noticed a single americauna that really was not in good shape. My brother, being the sweet kid he is, decided then and there to do a rescue-buy. He looked to me and said it would be better to have a pair. Before I could even process my own thoughts, my partner sighed and said "Fine, let's get one." We selected buff orpington and I said to the worker who was picking one out, "Get us the most lively one!" And so it begun.

I kept the chicks at my house and used an old, big tank we had as a brooder. We tried our best with the americauna, but she did not make it. She had not learned to eat/drink and by the time we got her, she was just too exhausted. We fed and watered her through a dropper as best as we could, but eventually we had to sleep and she was gone in the morning, poor thing.

My brother was heart broken but at the same time, he didnt want to leave the other chick on her own. It took a few weeks for him to find a chick he wanted, but in the mean time our girl was growing fast! She did not like it when no one was in the room with her, the sweet thing. I spent a lot of time with the little one and it felt like she was just what I needed at that point in my life.
---
Fast forward to today, my brother's chicken is alive and well and perfectly wonderful! Unfortunately, my girl passed just before Christmas last year, and it's been a very tough time for me. I miss her like mad, miss her voice, miss how her favorite place to stand was on my feet. But! I am determined that that is not the end of the story. I had a wonderful time with her and I don't regret it. Eventually, I will have my homestead and a lovely flock of my own! In the mean time, I've been considering taking in a new chicken for companionship. So that is kind of where I am at and why I've become part of this community! 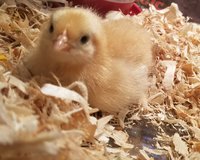 Glad that you are part of this community.

So sorry for the loss of your girl, sounds like she had a great home with you. I hope things work out where you can have more chickens, they really are a joy. Thank you for sharing your story.