The Gang's All Here!

Finally, my babies are here!

I ordered 13 Buff Orps (one roo), 7 Black Australorps (one roo) and 5 Barred Rocks (straight run). I received 27 chicks, with one clearly the oddball "rare" chick they throw in for free. I don't know what the other extra is, but hopefully it's one of the breeds I ordered.

Here's a group shot. Everyone say "Ahhh! How cute!" 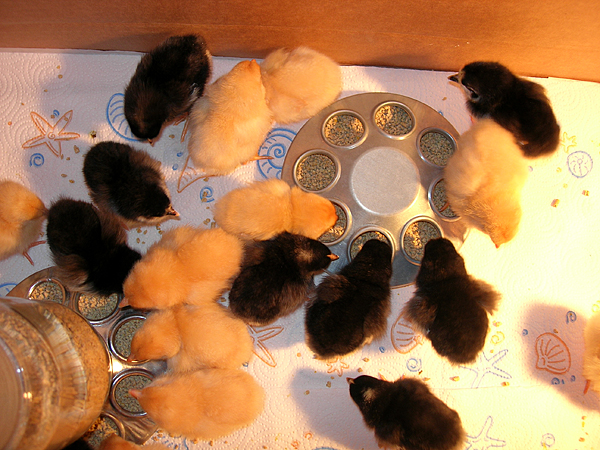 The freebie chick. Hubby and I think it may be a silver spangled hamburg. Opinions? It's clearly smaller than the rest of the gang and much more active. It also has a more upright stance. It's back is mottled, not barred. Also there is a light greenish tint to the legs. 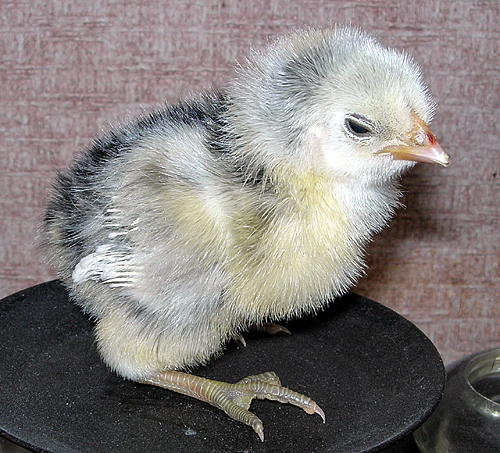 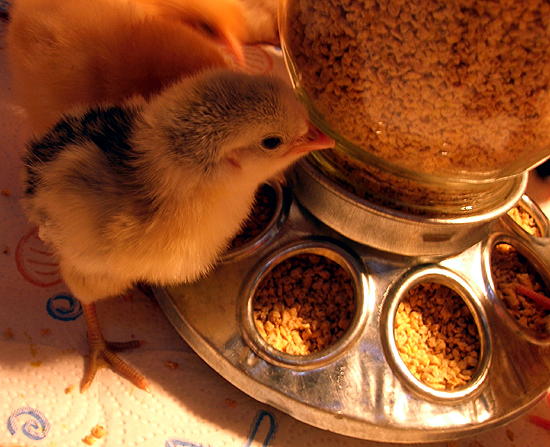 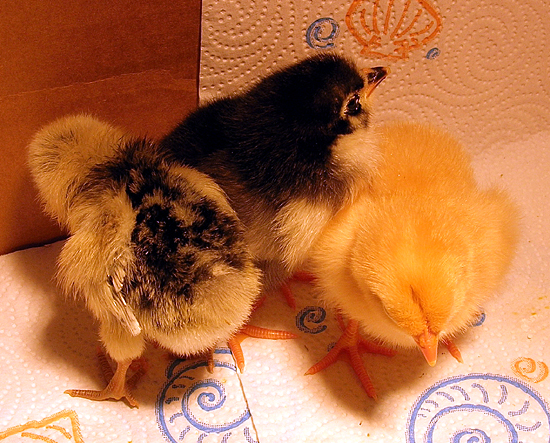 I can't tell the difference between the BR's and the BA's. Can you give me some tips? Not that it matters I guess. In a few days the BR's will be showing their stripes. Wouldn't the Australorps have darker shanks?

This one has a set of lungs! I suspect it's a roo based on the white blotch on the top of its head. I have four such chicks, the rest have dark black heads. Am I correct in my assumption? 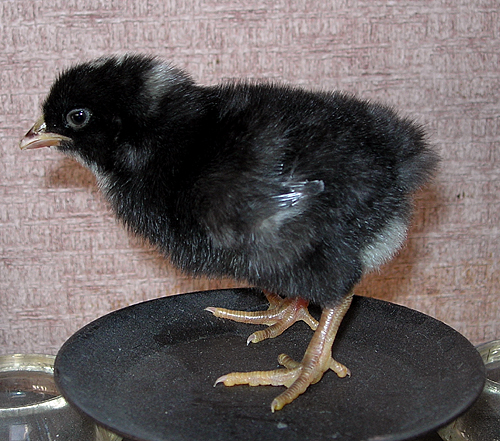 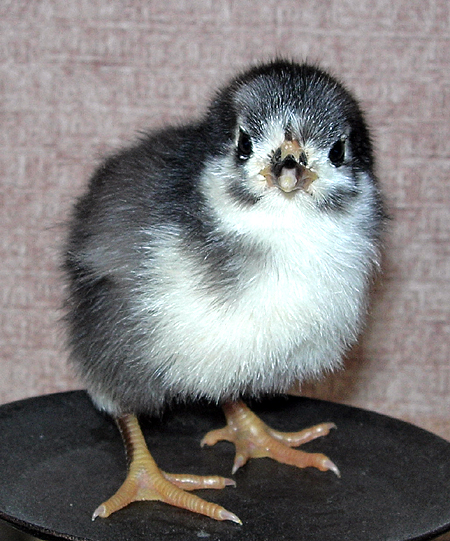 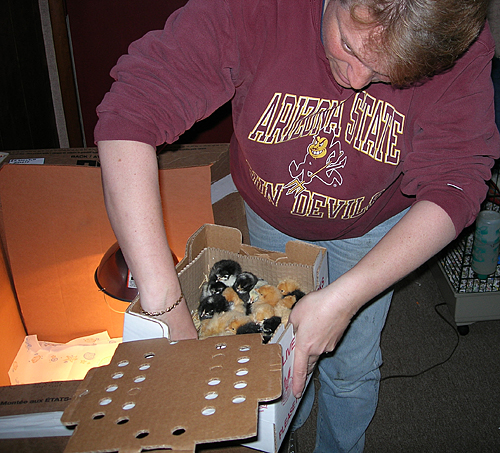 They all quickly found the water and food. After a bit of sprinting, scratching and jumping a few fell fast asleep. I ask you, is there anything cuter than a sleeping chick? I think not! 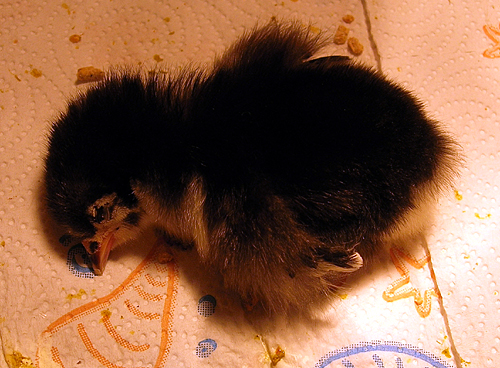 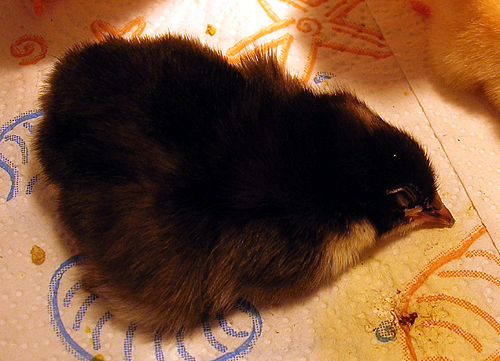 I see no signs of weakness in any of them. I am amazed that such seemingly fragile creatures are so incredibly resilient! I am one happy chick mom! 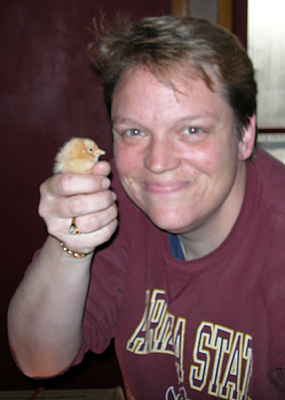 And so we are off to a running (and peeping!) start! Hurray!

Aw, they are so cute. I can't wait for mine to get here.

Way tooo cute!!! There's nothing sweeter than new baby chicks. (except for newborn humans!!) We had one with white on its head like yours does and it turned out to be a roo. have fun!

Very Cute Chicks! I like your little "odd ball" chick. Congratulations! Have fun with them!

Thanks all! Hubs digs them too! 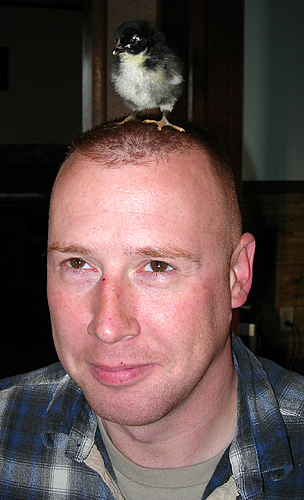 Just wait till the boys get home. There'll be chicks on everyone's heads for a group shot!

Hey 12 acres we have 12 australorp chicks 10 hens and 2 roos that are 4 weeks old today. Their shanks and feet were yellow untill a few weeks ago they have started turning darker and with the BA the bottoms of their feet are pinkish. also none of our BA had dots on their heads they were just yellow and black puff balls a few of them looked like they had a mohawk lol. Our roos were marked so we watched to see the difference between them and we realized that the roos have really short wings where the girls have long wings also when they start feathering out the girls have long tails and the roos have short stumpy tails hope you enjoy them as much as we have. We have chick addiction we bought 19 cuckoo marans 17 girls and 3 roos yesterday.

Thanks! I will have to look at the bottoms of their feet too. I forgot about that trick. I hadn't heard about wing length either. The mouthy one above has got to be a roo, plain and simple. LOL I think I'm in love with each of them. The little Autralorps come running when I scratch my fingers on their bedding. They peck peck peck at anything my finger shows them, and they are entranced by my diamond rings! LOL

Quote:Hope none of the chicks need to "poop" at the time.....


They are sure a bunch of cute little peeps.