What do you think? This gives me a 4 x 8 coop, room underneath for shade, movable, plenty of roost and nest space for some creative chicken math. . . but I would want to insulate the roof probably, more for heat than cold protection on the eastern shore of VA. Opinions, ideas, anyone? 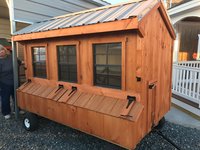 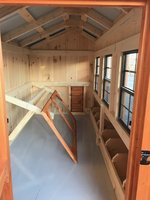 That is a screen door propped against the roost. May have to change the bars to 2 x 4s for my roo.

LeeHoll said:
What do you think? This gives me a 4 x 8 coop, room underneath for shade, movable, plenty of roost and nest space for some creative chicken math. . . but I would want to insulate the roof probably, more for heat than cold protection on the eastern shore of VA. Opinions, ideas, anyone?

Wow that looks real nice. I would NOT put insulation, even here in Wisconsin. A well ventilated, draft free roosting area is key. Chicken find heat and humidity to be more problematic than cold. Again, that looks like a great coop!

Will you have an attached run? I wrapped 3 sides of my run with clear plastic shower curtains from the Dollar Store in winter to stop the wind and the birds came out to enjoy the sun in temps at zero and below.

I like it! Finally a coop that does not include nest boxes in the floor size!

I agree with changing the roost to a more substantial one.

We will be allowing the flock the run of the yard as long as I am home, which is most of the time . Otherwise there will be a safe run for them to be outside. I was wondering if insulating the ceiling would help with the heat?

I love that it is wheeled, that will allow me to change location for summer (under the trees) and winter (against the south side of the barn).

Thanks for the input. Love the shower curtain idea biophiliac. And since I want a good broody hen to raise chicks, the extra nest boxes will be helpful.

Done the right way, insulation at the ceiling could keep extra heat out of the coop. You have a metal roof? Cant tell from your pic if there is a gap between the walls and the roof? Ideally you would have a gap under the roof overhang, covered with hardware cloth and open 24/7, 365 for ventilation. This is up high enough that it should not create a draft on the roost area. Believe me, you do not want to think in terms of holding heat in but rather keeping it out. Also you want an air vent down low so as to draw in fresh air from the bottom that exits through the upper venting, taking with it the moisture and amonia from chicken breathing and pooping. Besides a strong draft, the other thing to watch for in cold weather is that you do not get moisture condensing on the ceiling which then 'rains' down on the birds causing frostbite. You can always add more vents if you need them based on your observations. A lot of how you manage your birds will depend on your specific location. If you at least put your state in your profile, people can help you more. I think your birds will love their home.

There was a very interesting experiment that @mobius conducted last winter measuring temps and humidity, inside and outside the coop that I believe supports my point.

biophiliac said:
There was a very interesting experiment that @mobius conducted last winter measuring temps and humidity, inside and outside the coop that I believe supports my point.

Should the lower vent also be open 24/7? Also which wall? Does it matter? For me the prevailing winds all year come from the west/southwest with occasional switches to from the north for some winter storms. As I learn more from everyone I seem to be revising my rough coop plans daily.

yes, imo the lower opening should allow 24/7 air inflow but not allow rain/water to come in. There are many ways to accomplish this. Take your time and make adjustments as you go. Now thinking about the warmer months, do those windows open? Are they secured with hardware cloth?

Blooie said:
I am also in Wyoming. We had over a week where we didn't see over -20 degrees, and then it soared into the negative teens for another week. A few balmier days came along, then it repeated the cycle. <sigh> I don't insulate my coop...even got into a discussion with about it with @JackE and fortunately his wisdom prevailed.

This was our 4th winter since we built, and I don't regret not insulating or heating one little bit. Moisture control and ventilation are the keys. A person would think that sealing that coop up, warming it, insulating it, and all that stuff is the way to keep chickens safe. If you aren't planning on heating it anyway, what are you holding in? They keep all of their warm body air trapped next to their bodies. Oh, if you have enough chickens they'll also warm the air somewhat, but in my opinion not enough to justify the expense of insulation and a second, inner wall to keep them from pecking and eating it. I wasn't smart enough to build a Woods Style coop, which I regret, and our layout with a super high roofline pretty much means that there isn't enough heat generated by the chickens to warm the space. Dumb!

The only concession we make to winter here is to partially cover our run with clear, reinforced greenhouse type plastic. I say "partially" because we have a hoop run, and the plastic on the south side is a totally separate piece which we can roll up or down from the top just like a window shade, and then roll down and remove completely as it warms up outside. Most of the winter it's over halfway down, but on those super windy days when the weather is blowing in from the south or southwest, we roll it most of the way up. The north side also has a gap at the top of the arch, between the top edge of the run and the top of the people door. On the east side, we don't pull the large sheet of plastic all the way to the ground, instead leaving a small gap at the bottom edge. The first year we did the plastic, we sealed that puppy totally up. What a mistake! The floor was wet, the food was wet, and the chickens were wet. The top arch of the run was so loaded with condensation that it literally dripped down our necks when we went in there. Took forever to dry that out! We understood better then than ever before how critical ventilation is, even in the run. Moisture + cold = frostbite. That was the only winter a couple of my birds had frostbitten combs. Lesson learned, big time!

As for deep litter, I also use deep litter. There's a distinct different between deep litter and deep bedding. There are really good threads on here that address that very subject. Unfortunately either I have haven't figured out for sure how to find them or link them in this new format so maybe someone smarter than I can step in here. But remember that here in Wyoming, with our extremely dry and cold winter, composting in the coop slows way down. But either way, you'll find the chickens will sometimes make little hollows in the litter and pull their wings in, content and snug as can be. In summer mine do the same thing - but they'll lay their wings out flat over the edges of the holes to cool down.

In the end it's all about your personal comfort zone and what you think is best for your flock, regardless of what I or anyone else say. I just wanted to let you know that I'm in the same general area of the country, and we haven't found insulating necessary. Good luck! (By the way, we are in the Northwestern part of the state, 6 miles from the Montana border and about an hour and half from Yellowstone.

Edited to add: Funny, Jack...while I was typing you were posting! I do miss that little "new post notification" at the bottom!
Click to expand...

Mini coop sleep box for run? Stuck on this until coop is completed . . .