this little runt can not be a meatie... so what is it? pic included

top of the hill

So my DH and I purchased 6 meaties (3 Cornish and 3 Red Rangers) from our local feed store. As the weeks have passed (this saturday will be 6 weeks) I've notice that one of these chicks is not like the others. he/she is a little runt and roosts up high while the rest of the gang sleeps on the floor. I am convinced that this is not a meatie.

Any thoughts as to what breed he/she might be and when will I be able to tell what the sex is? would love another little hen!

Here is the little runt with its meatier buddy. That is a difference, lol. I agree. My first guess would be a red sex link/cinn queen. They go by a bunch of names.

Hrm, don't think it's a SL. I am assuming, since you didn't notice the change until a few weeks in, that this little guy started as a mostly white bird (red SL pullets start caramel colored, and would really stand out).

If that's the case, I would also ask if this was an extra in your order. If so, it's most likely a Production Red roo (it is definitely roo from it's stance). Nobody really wants them since Production Reds are desirable for eggs. So hatcheries like to stuff them into meat bird orders as extras.

I agree, red sex link pullet. Congrats, those are my favorite hens; sweet, calm, and lay like crazy right through the winter.

@ six weeks old - if a boy - it would show some comb/wattle growth. I would never sex based on stance. Otherwise I would have gotten rid of a really good hen 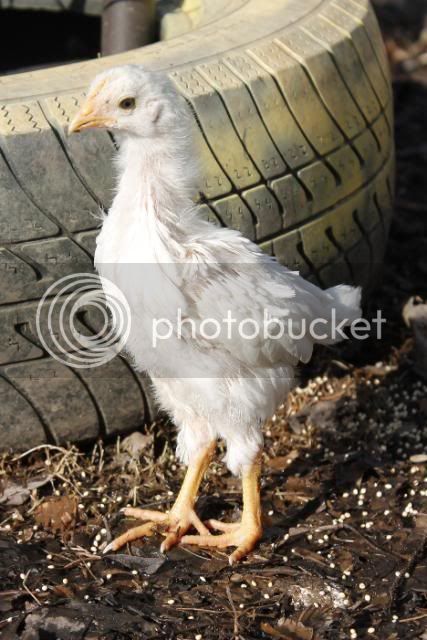 I have to agree w/ the others. Somehow a production red got in the wrong bin!

Anyone thinking a Rainbow Ranger?

I have red rangers that are six wks old... They have A LOT more feathers and are very much larger than this bird. check out my profile

C
New to Quail, how can I help this little one?

Lost my little runt today and flock is struggling