Three nights ago, I decided to leave the chicks (about 8 weeks old) to find their way up the ramp and into bed by themselves. They've been outside about 2 weeks. I was getting frustrated with always having to wrangle them in. The good news is that they found their way in! Such smart birds! I think I was trying to move them in too early.
Anyway.... when I checked on them in the coop, I noticed that they were all huddled, very uncomfortably, in a corner of the coop (which is inside of a shed). They have ample room. LOTS of room. Hubby asked me, "Is it normal for them to sleep on top of each other?" Uh... not unless they are really cold. Which is impossible since it's sweltering hot and humid here.

And now, ever since the tough-love night, they have been huddled and piling on top of each other. It is not cold. The "feels-like" temperature is 86 degrees and it's 11:30 at night. There were three chickens stacked on top of each other like pancakes. It was so hard to even tell if they were all there because of the piling. I have no idea what's going on??!! I don't know if I freaked them out by letting them find their own way in and they are scared or what.

My first thought was to turn the brooder lamp on because it might give them security. It's way too hot to do that. They are going to have to get used to the dark. There is a light in the shed that gives them just a little light at night.
My other thought was that maybe the concrete floor is cooler in the corner where there are fewer pine shavings. So I cleared the pine shavings from another part of the coop to give them more concrete.

I'm worried about them. The one that's always on the bottom of the pile is my barred rock and she was making some serious "I'm-too-squished-so-get-offa-me" clucking.

Does anyone have any ideas about what might be going on here? Should I block their corner?

My 4 red star pullets were all sleeping in 1 nest box at 3 months. I think they are just used to being in a bunch. I blocked off the box and they huddled on the floor of the coop together. Took about a month for them to roost and start spreading out.

This thread needs some pictures.

Do they have any light at night in the coop? I give my birds a night light as they were doing the same thing. Since they have their night lights they sleep on their roosts. I use a 7 watt bulb. It isn't much light but enough. This is an old picture. 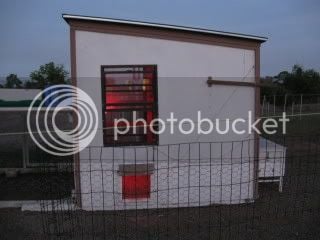 is that red glow coming from the 7 watt bulb? i didn't know they made small wattage red bulbs. i'll definitely look for them.

right now, they have a regular 60 watt white bulb, but i was thinking maybe they didn't like the white light. they were raised with the red heat bulb and seem to like it quite a bit. it's just way too warm to use it now.

Mine did the same thing. The first few nights they piled into a corner on top of each other (there are 4 of them). They would actually fight to be on the bottom of the pile. Now, they go up the ramp by themselves (hallelujah!) and they all perch on the skinny little board my hubby inserted to keep the shavings from getting kicked out, with their faces smashed against the wall. Totally ignoring the nice long 2x4 above their heads. Hopefully they will figure it out when they get too big to fit on the kickboard.

Red light is supposed to be more soothing to chickens (so Im told) try one of those old fashioned Christmas light bulbs in red. You can put it in an artificial candle.

Quote:
No, the bulb I had in the coop at that time was a 15 watt red sign light.

Quote:
I went out tonight to try to take one, but when I opened the door, they all got up and waited to see if i brought them a treat. I'm going to keep the camera handy from now on, though. Just like Tarragon's chicks, mine are smashed against the wall, too.

Thank you for all of your replies. I really thought I might have traumatized them!

G
Chicks piling on top of each other
2