VIDEO - Could this be infectious bronchitis..... or something else???

Apologies for the poor quality of the video. 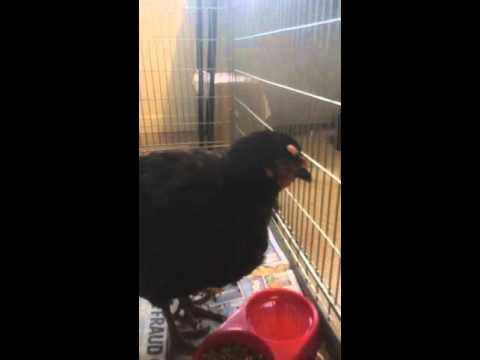 The video is of a hen that we are currently caring for while her owners are away, she has been noticeably ill for around 4 days.

History - this hen has been under some stress for a while due to an infestation of ants in her home coop that her owners have been finding difficult to manage. She came to us 1.5 weeks ago (with her three sisters) for respite, however the move most likely increased her stress temporarily due to the change in environment + our four hens picking on the new arrivals (even though they are sisters - separated as pullets)

We live in a hot arid environment (central Australia), but there has been a significant increase in humidity, and some rain in the last couple of weeks. Their bedding and food however have remained dry. Their coop is filled mainly with eucalyptus mulch and they free range 6 hours a day.

They are fed on a mix of free range layer pellets, seed mix, scraps from the kitchen and free range.

Signs - first thing we noticed was that she was being separated from the rest of the group. She then became quite ill seemingly very suddenly with closed swollen eyes, noisy labored breathing, and is very weak/ lethargic. She also has very watery green diarrhea.

She is able to stand and walk, but mostly just stays in one place with her eyes closed and her tail and head down.

She is still drinking and eating small amounts without assistance, but is losing weight unless we supplement with sub-cutaneous fluids.

She has no discharge from the eyes or nostrils.

She has no neurological signs

All of the other hens in the flock seem fine and are not showing any signed of illness.

Treatment so far - we are treating her with anti parasitics (ivermectin and fenbendazole), a broad spectrum antibiotic, anti inflammatories, and warmed sub-cutaneous fluids.

After four days of this treatment, she has shown no signs of improvement, but also has not deteriorated. So we are pretty sure that is is a viral infection of some sort - possibly with a secondary bacterial infection.

At this stage we are wondering if it is Infectious Bronchitis, and so we plan to continue the current treatment for 1-2 weeks to see if she rallies and fights it off on her own.

Sneezing a great deal of the time is the usual sign of infectious bronchitis, along with clear nasal drainage. Her symptoms could be from other diseases such as mycoplasma (MG,) or one of the others. The broad spectrum antibiotic may be good for her. Oxytetracycline, Tylan (tylosin,) Denagard, and Erythromycin are commonly used for MG. If it is a virus, then the disease will likely run it's course over several week. Antibiotics don't affect viruses, but can help to prevent the secondary infections.

There's absolutely no sneezing and no discharge which is what has us scratching our heads! We're using the broad spectrum just to rule out any secondary bacterial infections - but give the lack of response to all current treatments, we're pretty confident that it is a virus.

We're happy to keep up supportive treatment unless she deteriorates, but would like to have an idea of what it is so we know how long to quarantine her if she recovers.

It's a little strange that the rest of the chickens are not showing similar signs. By the time we humans realise a chicken is sick more than likely they have been ill for some time and hence have an opportunity to spread it to the whole flock.

Maybe it's possible that she is a carrier of some viral issue that has fought and won the battle with her immune system as a result of recent stresses?

Hoping she recovers, I personally would not return her to the flock. You risk infecting your chickens which would not be a risk worth taking imo.

We are now starting to suspect fowl pox - the respiratory signs have been slowly decreasing, but we are now noticing some small scabs and wart like growths on her eyelids, ears and wattles. So we are wondering if she had the wet form first and is now exhibiting sings of the dry....

The only thing that doesn't really fit is the green watery diarrhea :/

You might want to contact your department of agriculture or poultry official in your district about getting her tested. There are several common viral respiratory diseases besides IB.

UPDATE - the hen unfortunately passed away this morning.

We are having an autopsy conducted by our local vet to confirm our suspicion of diptheritic fowl pox.

Two of the other hens in the flock are now showing external lesions on their combs and wattles - so we are pretty positive. :/

Will start another thread re; managing a fowl pox outbreak.

Is it a respiratory issue or is it me?