Want to build a chicken moat.

I have seen very few pics though, most links just refer to the mother earth news article and drawing. Here is my garden plot as it is now. Or I should saw was a few months ago. It's pretty overgrown now. Bugs have eaten the squash and the tomatoes are withering vines, still loaded with tomatoes that rot. A chicken paradise. 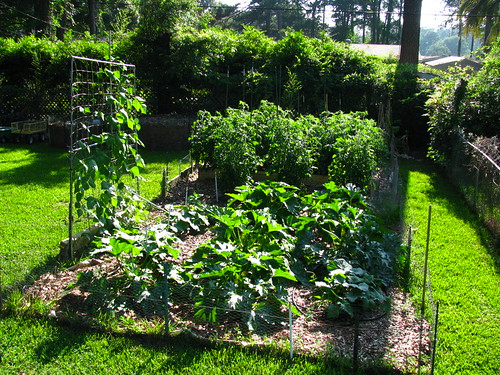 It's about 12 ft by 25 ft. I am converting one half to raised beds, was thinking about doing the other half but it's kind of handy to have an unbounded plot. The one raised bed full of tomatoes is 4ft by 12ft. I am going to move it over some so it's not so close to the neighbors fence, two bassets live there and I want to be able to mow. Here is a side view of one end of the garden. 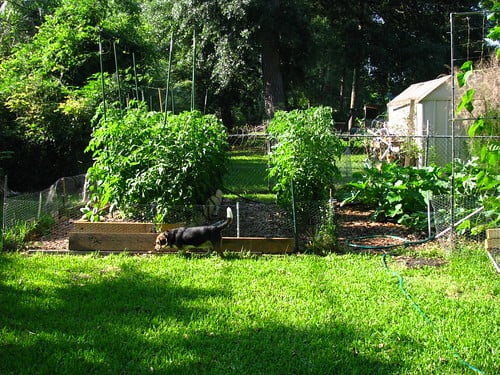 There are some boards stacked by the fence in front of the raised bed, that might create a false impression of how the bed sits, it's only 4 feet wide.


I am wondering how tall to make the fences and what wire to make them out of. Also how wide should they be. I can't move the whole garden over by much because there is an oak tree, which is out of the picture. The coup should probably be at the squash end beside the bean trellis, it gets the most shade there. Perhaps I should only do an L shaped moat. I am planning to let them free range in the yard when they get bigger. The chickens are 4 dark brahams. Hopefully I won't have any roos, but if I do I plan to replace them with hens, by goal is 4 hens, 3 at least.

I have 2 doggies, a beagle and beagle/dachound mix. They seem to be adjusting to the chicks just fine, although I do not trust them along with them. Maybe when they are bigger but I really don't want to tempt fate, there's no sense in it.

The fence around my garden seems to work well even though it is only poultry mesh propped up with little metal poles. I am planning on longer poles for the moat. Would 4 ft be enough? I suppose if I make it sturdy enough I could detach the run on my chicken tractor and just place it by the moat. I am concerned about how a double fence would look, right now I can sit in the yard and look at my purty gardnen. I would rather not have the view blocked by a bunch of mesh, so I was wanting to go with 1 inch poultry wire, not hardware cloth.

Anybody have any suggestions or pics of moats?

I am planning on making one this fall for the same purposes as you. I was planning on six foot high fences with a cover. There will be four feet between fences. I was going to use 1 x 2 wire for most of it and 1/2 inch hardware cloth on the bottom and buried apron.

I think it will be important to make the fences high enough that you can walk in it without bending over.

Good luck with your project and let's compare when we are done.

I think the chickens will be fine if there's at least a 4 foot height, but there's other things to account for including your typical garden predators, your chicken predators, how often you'll be in the moat, how permanent of a fence you want it to be, and what your budget is.

Where my grandparents live in Pennsylvania, they'd need two 8 foot fences to prevent deer from jumping in. (Seriously.) Where I live, I could probably do fine with a 4 foot fence, which would deter rabbits. I'd probably only go in the moat once every week or so to clean up scat, so maybe I could get away with draping bird netting over the moat to keep the chickens in and hawks out. With a smaller garden like yours, maybe I'd go in more frequently and want to make a top that's less trouble to move and replace. Or maybe I'd make something taller and have a permanent top.

I did see a description (alas, no pictures) of a 'permaculture chicken moat'. I believe this person had three moats encircling his garden. He'd grow grains in some and have the chickens in a third. When the grains in one got to maturity, he'd let the chickens in there to forage, then sow grains where they'd been. He'd keep shifting through the three moats as needed.

Actually, I kinda think it would be easy to use a fencing system kinda like this for a moat. If I had land, I'd probably put something like this around my vegetable plot to help with the rabbits and occasional deer, and then probably run some chicken wire on the inside to make a moat for a year or so. If I liked it, maybe I'd build a second interior fence later to keep the funtionality but improve the looks. 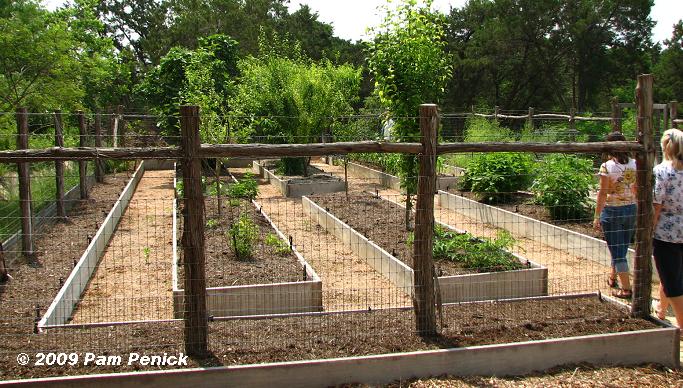 We have deer, so our garden is fenced with 6 ft non climb fencing and an additional wire across the top where we thought they might be able to jump it. We haven't had a single deer jump it. And it keeps our chickens out of the garden as well.

I live in the burbs and there are no deer here but there are small rats, hawks, occasional possum and coon, and cats. My doggies do pretty good with keeping cats out and alerting us to possums and stuff. I have on two occasions (in 13 years) seen a hawk swoop down and get a squirrel in the yard.

I am thinking that 4 ft would be high enough to keep chickens in and dogs and cats out. I am wondering how sturdy the fence posts should be, I have gotten along fine with metal poles and chicken wire in the past when I fenced in my yard for by doggies. And that flimsy fence keeps my current canines out of the garden, but then they dont' really try that hard to get in.

I found this pic from someone on this site! My garden isn't that big, I wonder if I could scale it down, make it a little narrower, for just my 4 chickens. Maybe I could make a smaller pen around the coop, with the option of containing the chickens. That way I could make part of it more secure.