Ok, I am in MS so my cold nights are not like nebraska cold nights. The coldest night the chicks spent out in this brooder was in the mid thirty degrees F outside. It started out as a 4'x3' frame this is 2' tall. On cold nights, I prop up some wooden sides (actually use a plastic tote lid on one side that fits.) All closed up, it looks like this: 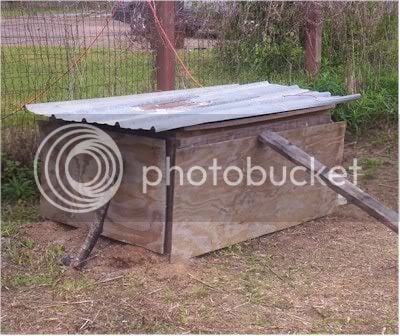 When it is warm enough (it is mid 70's now) I can take three of the sides down. (the back is solid wood.) Like this: 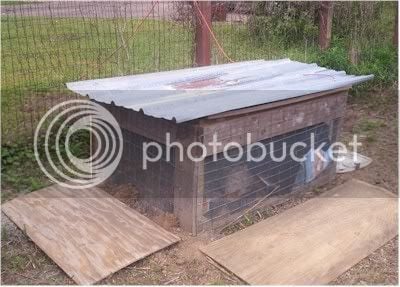 There is a piece of tin nailed on top to keep the rain out. can you make out the bungy cord on top of the tin? When I want to get in, I pull up the tin and attach it to the fence behind the brooder with the bungy cord: 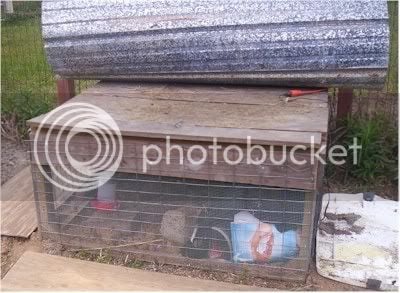 Underneath the tin, there is a plywood top, half of which is hinged for a door. I open the door to get access to the inside. 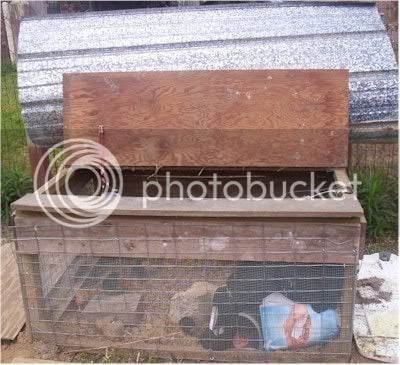 There is hardware cloth stapled to the inside of the brooder to keep the chicks in. There is 2"x4" weldwire nailed to the outside of the brooder to keep dogs and other predators out. (I actually did have to go outside one night, months ago with a different batch of chicks, to chase away a dog who was trying to dig into my brooder. So that's why I added the weldwire. The weldwire also wraps all the way around the bottom of the brooder, so if a dog did dig under, he still wouldn't be able to get inside.

Below is a shot of the inside. There is a block for them to climb on. The water can is suspended above a large wooden block. It stays remarkably cleaner this way. They have to hop up onto the block to get the water. When I open the door... up comes the water can so I can clean it and change it. 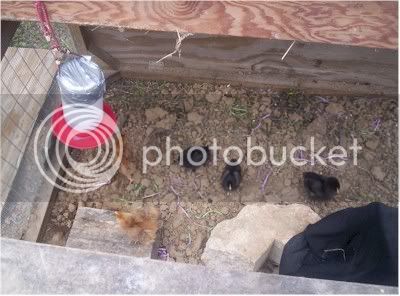 In one corner is a box (the box the feed store gave me when I bought the chicks) I have the top of the box open, but with a black shirt draped over the top of it to help it absorb heat (and keep it darker at the same time so the chicks can sleep) I also insulated around the outside of the box with a few magazines to help it hold heat. There is a heat light suspended above it. 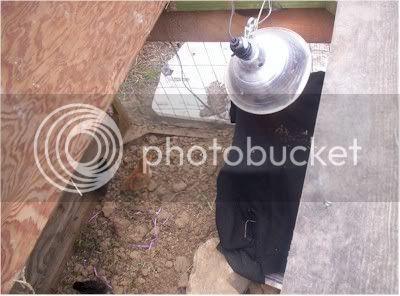 Below is a pic of the inside of the box. It is currently lined with paper easter grass. 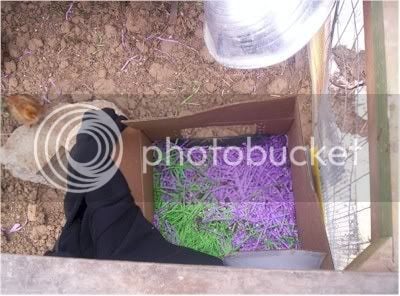 And here is a picture of the chicks playing around. I actually put more dirt in the bottom of the brooder to cover the wire (which is big enough for them to fall through.) They like it in there! 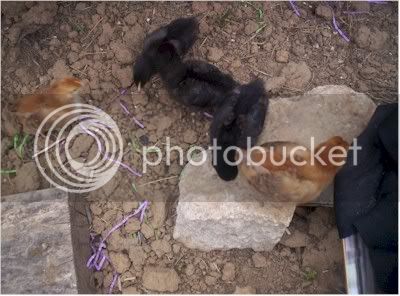 I never checked the temperature when we were having those cold nights, but I did check on the chicks frequently. They never bunched up or seemed distressed. Even when it was coldest outside, when I would go check on them (disturb them from sleeping) they would always act like they were comfortable and happy. I am pleased with how it worked out.

I totally love bungee cords and cable ties! It looks like you have maximum flexibility there!

thats a nice looking brooder.like the way you put plywood on the sides to block the wind.

Reading your post has given me huge relief! I have been back and forth second-guessing my decision to brood my chicks in the chicken coop (brand new). It goes into the 30's here at night and I didn't know if they would be OK in the coop with just the heat of the light-free chick warmer suspended above them. Our coop is draft free and well-built with insulated walls, etc. Coop stays about 5 degrees warmer than outside now with no chickens in it.

I plan to put 3" of shavings down. Should I put cardboard with paper toweling on top for the first week??? Or just the first few days???

Cool, how the boards fold down.

Thanks for the kind comments.

Penske:
I think it depends a lot on the size of your coop. The heat light keeps my brooder warm enough because it is just a small space. It wouldn't really warm up something the size of a closet or bathroom. Best thing to do is let the heater run and see how warm it gets.

If your coop is the size of a small room, you might want to invest in an electric space heater (mounted out of reach.) This would really warm up a well insulated room. If you can get the room temperature up in the seventies, then you can use a heat light or your chick warmer to heat up a smaller area to the nineties that the chicks like.

Where there's a will, there's a way! You should post us some pictures of what you have. I bet we can think of ways to keep it warm.

Edited to add, I mean you could use a space heater if you only have baby chicks that can't fly up and reach it. Of course you wouldn't use one with grown chickens in there.
Last edited: Mar 30, 2008

What you have done seems logical and seems to work!

I wish that I could do that, I can't get my day-olds until May 16 because of our climate, and they'll be indoors far longer than yours. I will be able to bring them grasses and other fresh plant material when they're ready and I expect them to *swarm* to the outdoor coop when it's time!

Inside brooder to outside coop

I
Insulating an outdoor brooder
2

S
Will my metal nesting lockers be to cold?