What a good rooster

I have had a rough Rooster Week at my house. My Jersey Giant roo got craaaaazy and attacked and flogged me pretty good. Punctures and bruises on one leg.....the following day he got in a serious fight with my other rooster, a RIR. They have always gotten along just fine, basically grew up together......but I got home to find them fighting and the poor RIR losing badly.

That was the final straw and the Jersey Giant is now confined to a large dog crate, until he can be culled. So now my RIR, who has always been bottom roo (used to have 3 total, and he was still bottom) is the only roo with 19 girls. He has always been the more attentive roo, clucking at the girls and calling them over for treats.....does the "predator scream" every night in the coop if I go in after dark, and if any of the girls are fussing he will call and call for them and come running over to see what is wrong. But he still was bottom roo, so he was always on the lookout for the Jersey Giant roo and having to behave himself.

His first full day along with the flock and he was already showing off his rooster skills.....here he is at night lockup. One hen was still out and about, so I guess he was standing there waiting for her to come inside. What a good rooster! 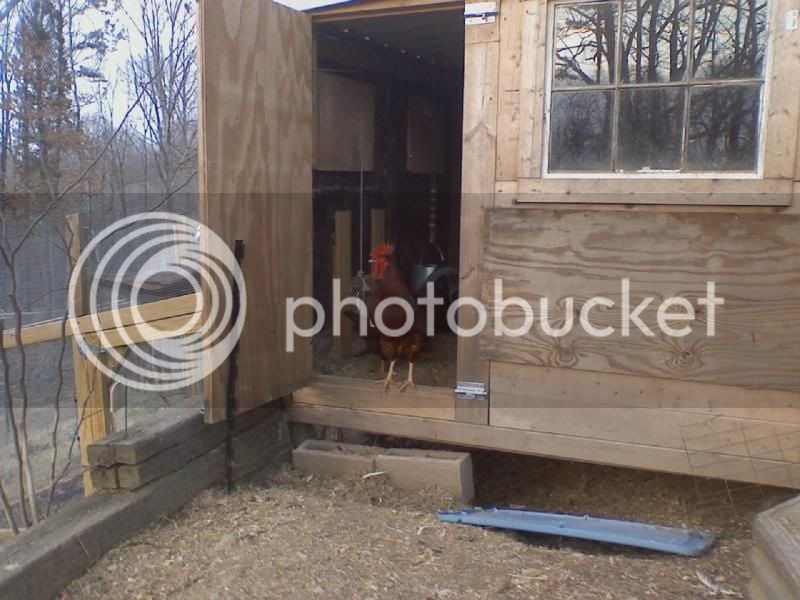 Hopefully he won't get crazy like my Jersey Giant roo. I know RIR are notoriously aggressive, but he has always been timid with people and hopefully will stay that way.
S

What a sweet photo! You can sense that he is on guard after doing his head count and coming up short! Looks like the tardy hen is going to get a lecture. He is off to a good start and hopefully he will be a terrific rooster for his girls and for you.

My dog was out following the lone chicken around (he is nice, just nosy), so she was squawking a bit........he was standing there crowing away, calling her in I think. The girls sure seem happier to only have 1 rooster. I enjoy walking in the yard without a 2x4 in my hand, and collecting eggs without fear. That rooster dropped his wing at me once a while back and I punted him 10 feet away. Now he runs when I get close and if I work really hard to corner and catch him, he will squat once I have my hands on him. He is a smart rooster.