in the attached pic - what breed is the brown/blue duck? the blue feathers are between the two white bands on the wing, i couldn't get it to show up in the picture. they were sold as mallards but from what i've seen (in the pen and on the net) they aren't.

i found my own answer -
they are mallards - and all female. all the photos i'd seen had the female as differant shades of brown - not with a blue streak ..
this is what i have - a good photo - way better than what i got. 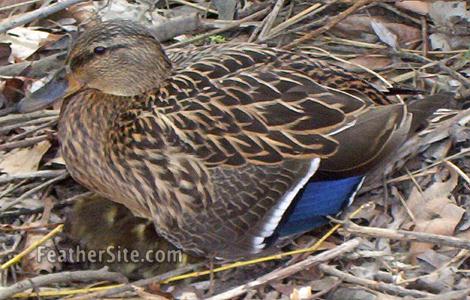 this is what i was expecting them to look like 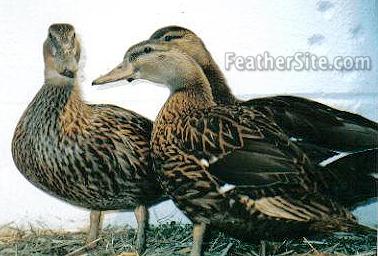 From the size, they are Rouens, which are bigger versions of a mallard. Same beauty, just bigger.

And they may not all be female. Rouen and mallard drakes look like females until they mature and go through the nuptial molt which brings them the classic "greenhead mallard" feathering in order to attract a mate. In the fall, they will have the eclipse molt and their coloring goes back to the "female" feathering.

From the bill color in your pic I would say you have at least 2 drakes. They have the greener bills. THe female has yellow in her bill like the pics you found on Feathersite.

Depends on how old they are to tell if they are male or female...As male look female for along time...And when they molt too...

I vote Rouen also because of size. Time will tell.

Are those full grown Pekings? If so, rouens.

And does one of them have white on its neck? Rouen males get a white stripe around their necks that often starts as a light patch.
Last edited: Jun 9, 2009

I would say Rouens also. My kids had them several years ago.

the pekins are the same age as the others - we got them all the week before easter. one does have white on the neck, and another looks like its starting to....i couldn't get good pics of them, they run from the camera lol

B
What Size Enclosure For Wild Duck Breeds?

Color expert's what shade of mallard is my Rouen cross?